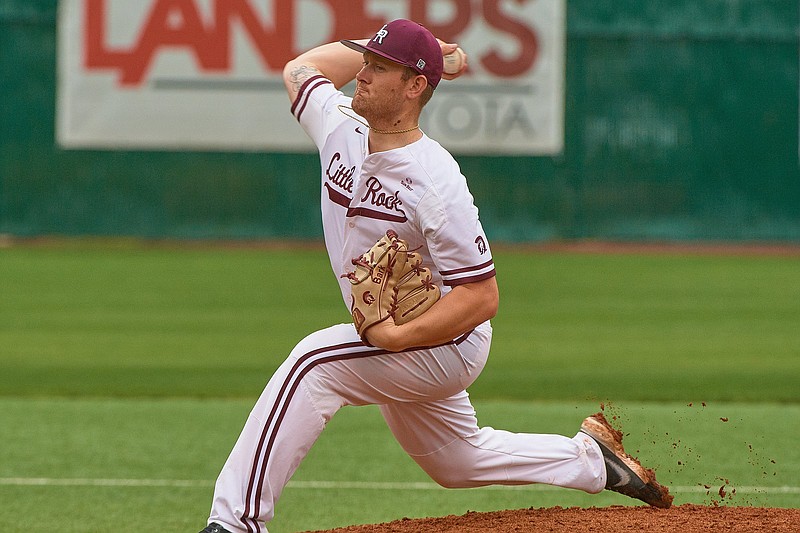 UALR pitcher Aaron Barkley is so versatile that Coach Chris Curry said he’ll bring him out of the bullpen no matter what the situation calls for. “When we think the game is at its most crucial point, when it’s in consequence, we’re going to bring Barkley into the game,” Curry said. (Photo courtesy UALR Athletics)

There's a number of names for the role Aaron Barkley has in the University of Arkansas at Little Rock bullpen. No matter which title, the definition of the job carried out by the Trojans' Swiss Army knife is singular and simple.

"When we think the game is at its most crucial point, when it's in consequence," UALR Coach Chris Curry said. "We're going to bring Barkley into the game."

One such moment came at a home game at Gary Hogan Field against visiting Louisiana-Lafayette on April 23. After starter Hayden Arnold loaded the bases with no outs in the seventh inning, the Trojans' once comfortable 6-1 lead was in jeopardy with the tying run on-deck. Enter Barkley.

The first batter he faced was Brett Borgogno, and Barkley fanned him on three pitches. Next, he battled with Brennan Breaux over an eight-pitch at-bat, which ended with an inherited runner coming home after second baseman Jorden Hussein couldn't corral Breaux's soft grounder. Unbothered, Barkley struck out back-to-back Ragin' Cajuns to limit the damage and maintain UALR's 6-2 advantage. He went on to retire six of the final seven batters he faced, closing out an 8-2 win.

"Sometimes sweaty, but always steady," as UALR pitching coach R.D. Spiehs refers to him, Barkley has routinely turned sticky situations comfortable in his first season with the Trojans, emerging as one of most crucial members of a team challenging for a West Division title in 2021.

"I just do my job whenever my name is called," Barkley said of his role. "I've been doing this a long time and I've been in those pressure situations a lot. What I realized is the pressure is on the batter more than it is on you."

Appearing in the fifth inning, or the seventh or ninth, and for as many as four innings at a time, Barkley has done it all for the Trojans this season and done it well.

In 472/3 innings, he's maintained a 1.89 ERA, striking out 40 batters while walking just six. Opposing batters are hitting .195 against the graduate transfer from Mississippi Valley State, a number that ranks fifth in the Sun Belt, and his .80 WHIP is tied for fifth in the nation, level with Vanderbilt's Kumar Rocker.

Experienced from four previous years in college baseball -- during which he also was a catcher -- and certain of himself, his pitches and his command, he competes without fear no matter the moment, a trait that's proven a boon for the Trojans.

"I'm never scared," the 6-1 right-hander said. "When I'm up there I know I'm better than the hitters and that I'm going to get them out."

Soon after arriving at UALR last summer, Barkley earned another nickname -- "The Professor."

He quickly took freshman pitchers under his wing, showing them routines for the weight room and methods for attacking a bullpen session. With Spiehs, he dissected UALR's veteran hitters such as John Michael Russ and Kobe Barnum, finding holes in their swings and positing ways to challenge hitters that impressed Spiehs, the seeds of discussions that have carried into this season.

"We have a lot of baseball 400-level conversations," the third-year pitching coach said.

His knowledge and understanding stands among the suppliers of Barkley's confidence.

As a catcher at Mississippi Valley State, he learned to manage a game and how pitchers and hitters approached it. In the dugout and the bullpen, he scours scouting reports searching for hitter tendencies, often bugging Spiehs for information on what a given batter has done in their last 15 at-bats.

Working with a former hitter's mind, Barkley has feasted on Sun Belt batters with four pitches and a command he says he honed throwing back to the mound from behind the plate. He can pinpoint his fastball, deceive with his change-up and make batters chase his slider and curveball, a collection of pitches as versatile as he is out of the bullpen.

An admirer of three-time Cy Young winner Max Scherzer, Barkley makes use of his mind and his arsenal to mow down the opposition.

"If you know their weaknesses and what they do, you can attack them," Barkley said. "And once you get ahead in the count, you can get batters to swing at things they don't want to swing at."

Barkley and the Trojans begin a non-conference series at Sam Houston State tonight tied for second in the West Division, trailing Texas-Arlington. Remaining are two final conference weekends before the Sun Belt Tournament which begins May 25.

"His heart rate is always level and his hand never wavers," Spiehs said. "His mentality is bullet-proof."

Barkley at a glance

Noteworthy Barkley holds a 1.89 ERA (No. 3 in the Sun Belt) in his first season with the Trojans. His .80 WHIP is tied for fifth in the nation…Barkley spent the previous four seasons at Mississippi Valley State, where he played catcher and pitched, making 50 career appearances on the mound. He was named second-team All-Southwestern Athletic Conference in 2019.