OPINION | FLASHBACK: 'Leave Her to Heaven' 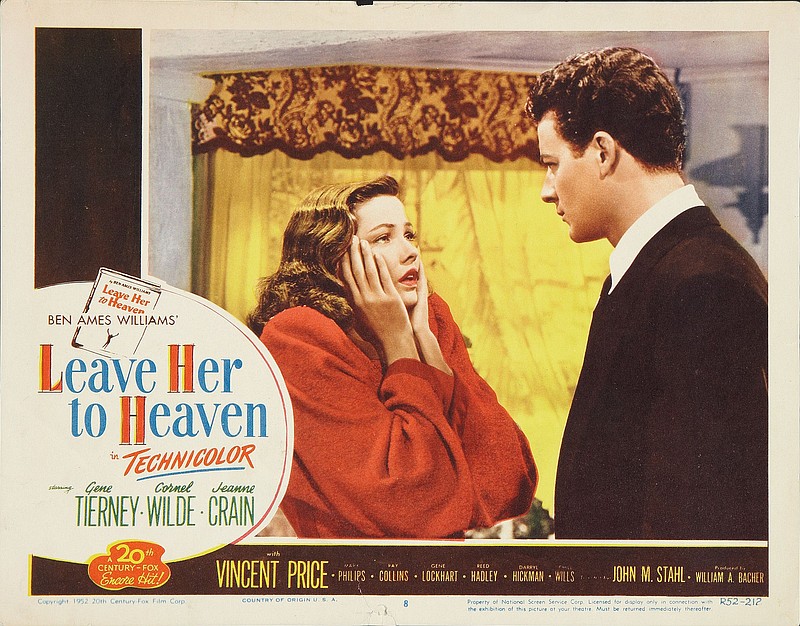 Ellen (Gene Tierney) confesses her crimes to her husband, Richard Harland (Cornel Wilde), in a dramatic scene from the Technicolor film noir, “Leave Her to Heaven,” from 20th Century Fox in 1945.

When you think of film noir, you think of a low budget, black and white photography, nighttime settings and beat-down men with sinister intent.

"Leave Her to Heaven" is a film noir that doesn't fit the standard definition. The initial difference is this is a big budget, A-list Technicolor film, set in beautiful daytime splendor in places like Bar Harbor, Maine; Warm Springs, Ga.; and Albuquerque, N.M. And the only thing sinister is a beautiful woman, not a man. But she is not above murder, forced miscarriage and framing another person for murder.

Besides "Heaven," I can think of only two examples that also fit this description: "Niagara" and "Slightly Scarlet." The remainder of films noir are shot in black and white, usually of B-picture status, or even C-picture status ("Detour").

The gorgeous Gene Tierney gives what is likely her finest performance as Ellen Berent, who meets novelist Richard Harland (Cornel Wilde) on a train bound for Albuquerque. He resembles her late father and perhaps that's the reason for her interest in Richard. She is joining her step-sister, Ruth (Jeanne Crain), and her mother, (Mary Philips), for the funeral of her father.

To say Ellen is obsessive is an understatement. She had an unusual relationship with her father, which is never really elaborated on. I have a feeling the censors wouldn't allow even a hint of incest, if that was the case.

Ruth is the antithesis of Ellen -- the "good girl" versus the "bad girl." But their mother makes it a point to tell Richard they are only step-sisters.

The film begins, not with the usual 20th Century Fox fanfare, but with a timpani pounding what sounds like a death march. The timpani suddenly evolves into Alfred Newman's dramatic (and beautiful) score that soars with a foreboding of what is to come. (I think Newman was channeling Bernard ­Herrmann.) Again, not the typical film noir music score.

Leon Shamroy won an Oscar for his color cinematography and when you watch the film you can see why he won. Tierney was also nominated but lost to Joan Crawford in "Mildred Pierce." Other nominations for the film were for art direction/interior decoration (that it should have won!) and sound recording. Newman's score wasn't nominated for this film but he was nominated twice that year for "Wilson" and "Irish Eyes Are Smiling." And he had won the year before for "The Song of Bernadette."

Ellen quickly marries Richard. She tells him "I'll never let you go. Never, never, never." This comes much to the dismay of her lawyer fiance, Russell Quinton (Vincent Price, who had a similar role with Tierney in "Laura," the year before). She breaks up with him in a telegram, like sending a text these days.

Richard has a younger brother, Danny (Darryl Hickman), who relies on him for love and support in his fight against polio. (You younger readers could Google "polio" for another pandemic that swept the world some 70-plus years ago.) Ellen is immediately jealous of Danny because he takes Richard's focus away from her. In fact, anything and anyone who takes the focus off her is suspect -- and must be stopped.

At one point, Ellen confesses to Ruth about her pregnancy.

Ellen: "I hate the little beast. I wish it would die. Shocked, aren't you?"

Ruth: "How can you say such wicked things?"

Ellen: "Sometimes the truth is wicked. You're afraid of the truth, aren't you, Ruth?"

I hate to give away too much of the plot because that would be mean. Besides, you have to experience the depths to which Ellen will dive to get what she wants -- and boy howdy.

John M. Stahl -- who made the original versions of "Back Street," "Imitation of Life" and "Magnificent Obsession" -- directs Jo Swerling's screenplay, based on Ben Ames Williams' novel. Stahl was an expert at melodrama but lifted it up to a higher standard, much as Douglas Sirk did later on.

My only negative comments involve Wilde, who seems rather wishy-washy in his role, and Price's character. I doubt any court would allow the former fiance of the deceased to prosecute the alleged murderer, but it makes for great drama. And the Technicolor is a knockout.

Available for sale and on various streaming applications