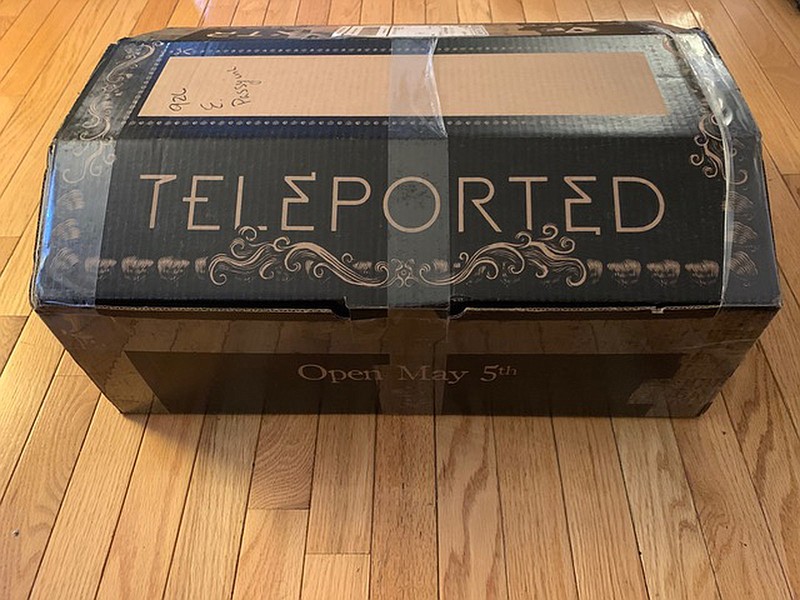 “Teleporters” — virtual attendees — participating in this year’s True/False Film Festival didn’t miss out on the traditional swag — they were sent a load of goodies in this casket-looking box. (Special to the Democrat-Gazette/Ella Marchant) CORRECTION: An earlier version of this caption misstated the name of the photographer.

In what now feels like decades ago, last year's True/False festival, an annual celebration of documentaries amid much busking and revelry in Columbia, Mo., was the last live festival of what would become a cinematic schedule absolutely decimated by covid-19. As critics and festival fans congregated for a fabulous long weekend of docs, food and music, there was little sense of our impending doom. Little did we know then it would be the last time in 2020 -- such a relatively carefree moment in the company of large, enthusiastic audiences -- would be allowed.

As festivals, like the rest of us, have begun to crawl out from the wreckage of 2020, organizers have a momentous decision to make: Play it safe and keep things virtual (a la this year's Sundance program), or go bold and make plans to return to the live, all-in format from the Before Times (a la Cannes, which is at least tentatively planning on a fully live festival in early July).

But the organizers of True/False, always a creative and adaptive bunch, have determined a third way: Keep the majority of the festival live, albeit using outdoor venues and limited seating, while also offering a "virtual experience" package for people still unwilling -- or unable -- to travel, which includes a large, shipped box of mysterious goodies intended to help re-create the proper T/F experience from your living room.

Given little choice, coming from Philly, I opted for the virtual version, so it was that this past Saturday a large, dark parcel arrived to me from Columbia, offering a tantalizing litany of possibilities.

The box was labeled clearly "Do not open until May 4," but in my never-ending effort to provide you, dear reader, with the most complete and far-reaching information possible, I cheated just a bit and opened it a day early. How does one go about long-distance re-creating such a singularly marvelous experience as True/False?

The cardboard box, shaped a bit, it must be said, like a small casket, opened up to reveal a healthy assortment of oddities, including a pair of weathered-looking mauve sweatpants, a T/F metal cup, a cap with a line of inscription ("Documentary+"), a candle, a small Moleskine notebook, a packet of tomato seeds, and a series of boxes, labeled like an advent calendar, for each day of the festival, and each one augmenting the virtual film showcased on that day. This highly curated selection of films for the "teleporters" (as T/F lovingly refers to them) and their accompaniments, are intended to be a healthy taste of the banquet of glorious tumult in Columbia. There are seven features, accompanied by four shorts programs, in the Teleported lineup:

"Delphine's Prayers": A spoken-word memoir, shot over the course of several extended interviews, Rosine Mfetgo Mbakam's film allows her protagonist, Delphine, a native of Cameroon, who endured unspeakable horrors growing up in her native country before immigrating to Belgium, to detail her journey of trial, tribulation, and triumph with hallowed intimacy, to believe the press notes.

"From the Wild Sea": What promises to be a truly difficult watch. Robin Petre's film concerns the steady decline of aquatic species, which once teemed in the oceans. Through a miserably predictable confluence of habitat erosion, global warming, human invasiveness, and pollution, the creatures of the deep face ever-more serious challenges to their survival. Focusing on the affected animals, and some of the scientists, ecologists, and veterinarians tasked with fighting against their extinction, I anticipate being both furious and despondent after viewing it.

"The Grocer's Son, the Mayor, the Village and the World": Sounding a bit like the title of a Peter Greenaway film, Claire Simon's loving exploration of film and society instead takes us to Lussas, a small French village, where an enthusiastic cinephile, Jean-Marie Barbe, has just launched a new digital platform subscription service called Tenk, with which viewers can gorge on documentaries to their heart's content. A former True Vision recipient (essentially, True/False's Medal of Freedom), Simon has taken her award-winning, 9 hour film, "The Village," and distilled it down to more of its essence.

"No Kings": Meanwhile, down in a picturesque, remote coastal village in southern Brazil, the Caicara, a group of native descendents, escaped African slaves, and Western pirates, live in a society separate from the country at large, fishing and cavorting with many of their own traditions. Emilia Mello's film also includes the director's interactions with her subjects, very much becoming a part of the piece itself.

"Songs That Flood the River": Staying in South America, German Adolfo Arango's film documents the life of an extraordinary female singer named Oneida. Surviving a snake attack that left her with one leg as a child, and, as an adult, the horrific 2002 Boyaja massacre, a conflict between rival political factions that ended up decimating the small village of Bellavista where Oneida lives, she defiantly continues to write songs utilizing the traditional melodies of alabados, Black funeral marches, to call for peace and unity amid the turmoil.

"This Rain Will Never Stop": A group of Syrian family members are scattered across the continent after they flee their civil war-torn homeland, only to find more conflict wherever they go. Youngest member Andrily joins up with the Ukrainian Red Cross in order to help people, but eventually gets called back to his native country, to be reunited with what remains of his family. Alina Gorlova's film uses Andrily as a sort of guide into the heart of a decimated country, where cycles of conflict, violence and, perhaps, redemption are ever-spinning.

"The Two Faces of a Bamileke Woman": A Cameroonian filmmaker returns from studying her craft in Belgium, her young son in tow, in order to spend time with her mother, and some of the other female relatives who helped raise her. In a prime example of what True/False refers to as "collaborative nonfiction," director Rosine Mfetgo Mbakam immerses the audience in the stories and culture of her family, emerging with a sense of her place in their world, even as she has relocated to Europe.