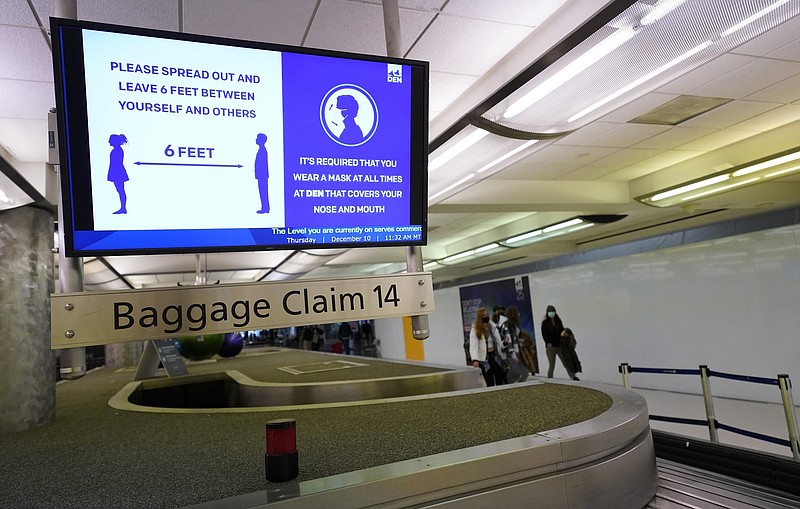 This electronic sign on Dec. 10 in the terminal of Denver International Airport warns travelers to maintain a social distance. (AP/David Zalubowski)

WASHINGTON -- The Federal Aviation Administration said that it is reviewing 1,300 reports of passengers disrupting flights since February and that it has identified potential violations in about 260 cases.

The agency said that 20 passengers have received notice that they face possible enforcement actions -- which could include jail time or thousands of dollars in fines -- and that it is preparing "a number" of additional enforcement actions.

It typically enforces and imposes fines on up to 180 cases of unruly passengers a year.

The incidents of passengers being unruly -- ignoring crew members' instructions, fighting and refusing to wear a mask -- have been surging, according to the FAA, even while the number of Americans flying on commercial planes remains about 40% below pre-pandemic levels.

"The physical and verbal abuse that flight attendants have been taking has been way off the charts," Sara Nelson, president of the Association of Flight Attendants-Communications Workers of America, AFL-CIO, told NBC News.

While the agency tracks the number of enforcement actions against passengers, officials said it had not traditionally said how many reports it received, because the number remained relatively consistent year over year. After noticing a "significant" increase in the number of reports being submitted a few months ago by flight crews, it began to track those as well, officials said.

In response to a wave of disruptive behavior on flights linked to the Jan. 6 riot at the U.S. Capitol, FAA Administrator Steve Dickson signed an order in January establishing a "zero-tolerance" policy for passengers who refused to follow crew members' orders.

The order was set to expire in March, but it was extended indefinitely.

The rise comes despite a new federal law that makes wearing a mask on commercial flights mandatory, punishable by a fine of $250 for the first offense and up to $1,500 for repeat offenses. Before it became law, the nation's airlines adopted mask-wearing policies, enforcing them by banning repeat offenders from flying.

Passengers can appeal fines to an administrative law judge for the National Transportation Safety Board. On Friday, the Transportation Security Administration announced that it would extend a requirement that people wear masks in transportation settings, including at airports, on commercial aircraft and on buses and trains through Sept. 13.

The requirement, which began Feb. 1, had been set to expire next Tuesday.

Last week, the FAA announced enforcement actions against three passengers with fines ranging from $14,500 to $31,750. The three incidents involved travelers bringing their own alcohol aboard flights.

Two of the incidents took place on Jan. 4 and involved passengers on the same JetBlue flight from Haiti to Boston. A third incident took place Jan. 14 on a SkyWest flight from Yuma, Ariz., to Dallas-Fort Worth.

In another incident, a Southwest Airlines passenger faces $16,500 in fines for refusing to wear a mask and using "combative" and "offensive" language on a Jan. 26 flight from Chicago to Sacramento, Calif., the FAA said.

After being asked repeatedly to wear a mask over his nose and mouth, the man was asked by a Southwest supervisor to leave the plane. The passenger complied, but as he walked to the exit, he called two flight attendants "pathetic" and hit one with a bag.

The number of passengers who have been banned from the nation's airlines continues to rise. Delta Air Lines appears to lead all U.S. carriers by putting on its internal no-fly list about 1,200 passengers who refused to wear a mask or became unruly on a plane.

It is followed by Frontier Airlines with more than 830, United Airlines with about 750 and Alaska Airlines with 542. American Airlines and Southwest Airlines declined to disclose how many passengers they have banned.