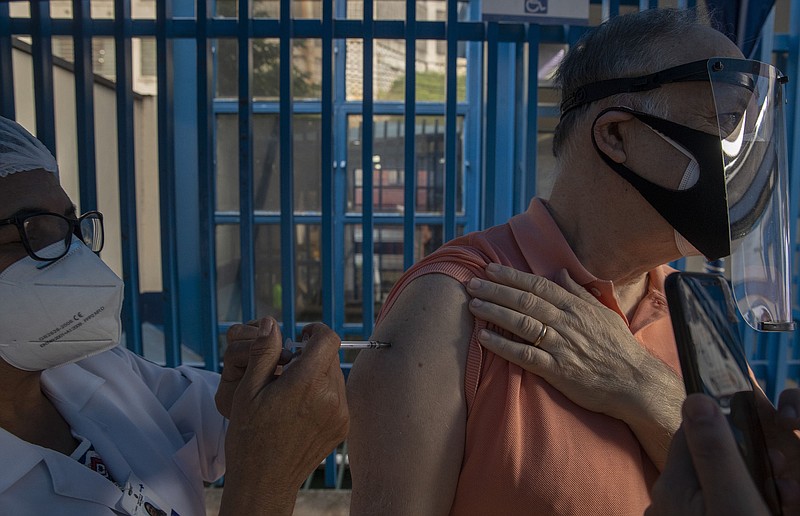 A health worker administers a Pfizer covid-19 vaccination Thursday at a community medical center in Sao Paulo. Brazil Health Minister Marcelo Queiroga said he fears the country lacks the means to produce vaccines and that lifting patent protections could interfere with efforts to buy doses from pharmaceutical companies. (AP/Andre Penner)

Also, it is not clear what effect such a step might have on the campaign to vanquish the outbreak.

Activists and humanitarian institutions cheered after the U.S. reversed course Wednesday and called for a waiver of intellectual-property protections on the vaccines. The decision ultimately is up to the 164-member World Trade Organization, and if just one country votes against a waiver, the proposal will fail.

The Biden administration's announcement made the U.S. the first country in the developed world with big vaccine manufacturing to publicly support the waiver idea floated by India and South Africa in October. On Thursday, French President Emmanuel Macron embraced it as well.

"I completely favor this opening up of the intellectual property," Macron said at a vaccination center. He called it "a global public good."

However, like many pharmaceutical companies, Macron insisted that a waiver would not solve the problem of access. He said manufacturers in places such as Africa are not equipped to make covid-19 vaccines, so donations of shots from wealthier countries should be given priority.

Pfizer, Moderna, Johnson & Johnson and AstraZeneca had no immediate comment, though Moderna has long said it will not pursue rivals for patent infringement during the pandemic.

"On the current trajectory, if we don't do more, if the entire world doesn't do more, the world won't be vaccinated until 2024," he said in an interview with NBC while visiting Ukraine.

India welcomed the move. As the world's largest producer of generic pharmaceuticals, it could eventually play a major role in producing cheaper versions of vaccines.

Italian Foreign Minister Luigi Di Maio wrote on Facebook that the U.S. announcement was "a very important signal" and that the world needs "free access" to vaccine patents. But Italian Premier Mario Draghi was more circumspect.

But German Chancellor Angela Merkel's office spoke out against it, saying: "The protection of intellectual property is a source of innovation and must remain so in the future."

A Merkel spokeswoman, speaking on condition of anonymity, said Germany is focused elsewhere: "The limiting factor in vaccine manufacturing is production capacity and high quality standards, not patents," she said.

In Brazil, one of the deadliest covid-19 hot spots in the world, Health Minister Marcelo Queiroga said he fears the country does not have the means to produce vaccines and that the lifting of patent protections could interfere with its efforts to buy doses from pharmaceutical companies.

EU Commission President Ursula von der Leyen said the 27-nation bloc is ready to talk about the idea, but she remained noncommittal and emphasized that the EU has been exporting vaccines widely, while the U.S. has not.

She said the European Union was "ready to discuss any proposals that address the crisis in an effective and pragmatic manner."

But von der Leyen also suggested that the focus should be on getting more vaccines to countries that needed them by following the bloc's example in permitting the ample export of doses. The United States has so far balked at that approach, keeping most doses produced domestically for use at home.

"We call upon all vaccine-producing countries to allow export and to avoid measures that disrupt the supply chains," she said.

EU leaders said the bloc may discuss the matter at a two-day summit that starts today in Porto, Portugal.

Several lawmakers in the European Parliament insisted patents had to be freed up, arguing that big pharmaceutical companies had been given large subsidies from the EU to develop the vaccines while the pandemic has driven up profit for the producers.

Greens President Ska Keller said Biden's opening made sure "there can be no more excuses from the European Union." She called on the EU "to support this historic initiative and make global solidarity a reality."

The pharmaceutical industry has argued that a waiver will do more harm than good in the long run.

Easing patent protections would eat into their profits, potentially reducing the incentives that push companies to innovate and make the kind of tremendous leaps they did with the covid-19 vaccines, which have been churned out at an unprecedented pace, they argue.

The industry also has contended that production of the vaccines is complicated and can't be ramped up simply by easing patent rights. It has said reducing snarls in supply chains and shortages of ingredients is a more pressing issue.

The industry has insisted that a faster solution would be for rich countries to share their stockpiles with poorer ones.

"A waiver is the simple but the wrong answer to what is a complex problem," said a statement from the International Federation of Pharmaceutical Manufacturers and Associations. "Waiving patents of COVID-19 vaccines will not increase production nor provide practical solutions needed to battle this global health crisis."

Stephen Ubl, president and CEO of Pharmaceutical Research and Manufacturers of America, said the decision would "sow confusion between public and private partners, further weaken already strained supply chains and foster the proliferation of counterfeit vaccines."

The group condemned the U.S. decision: "In the midst of a deadly pandemic, the Biden administration has taken an unprecedented step that will undermine our global response to the pandemic and compromise safety."

Albert Bourla, chief executive of Pfizer, has said his company has been doing its best to step up production and also is selling its vaccines at cost to the world's poorest countries.

But two weeks ago, he said there was little chance of his signing off patents or even contracting outsiders to produce the Pfizer-BioNTech vaccine and that his company already had invested heavily to step up capacity to produce 4 billion doses a year.

"The only reason we have vaccines right now is because there was a vibrant private sector that was able to jump into various efforts with the speed of light and deliver solutions," he said, adding that patent protection was essential to that.

Pfizer rung up $3.5 billion in vaccine revenue in the first three months of the year, which would translate to hundreds of millions in profits based on the company's forecasting. Moderna's vaccine brought in $1.7 billion in revenue in the first three months of this year, the company said Thursday. AstraZeneca, meanwhile, has pledged to forgo all profits from covid-19 vaccine sales for a period of time.

Intellectual-property law expert Shyam Balganesh, a professor at Columbia University, said a waiver would go only so far because of bottlenecks in manufacturing and distribution.

Backers of the waiver say expanded production by the big pharmaceutical companies and donations from richer countries to poor ones won't be enough, and that there are manufacturers standing by that could make the vaccines if given the blueprints.

About 20 million vaccine doses have been administered across the African continent, which has 1.3 billion people.

There is precedent: In 2003, WTO members agreed to waive patent rights and allow poorer countries to import generic treatments for the AIDS virus, malaria and tuberculosis.

"We believe that when the history of this pandemic is written, history will remember the move by the U.S. government as doing the right thing at the right time," said John Nkengasong, director of the Africa Centers for Disease Control and Prevention.

"The notion that 'no one is safe until everyone is safe' is true, and the Biden administration seems to have finally taken that to heart," said Fatima Hassan, a South African human-rights lawyer and founder of the Health Justice Initiative, which was part of a global campaign for a generically produced "people's vaccine."

"Did it take them seeing people in India dying on television to make this decision?" she asked. "Maybe, but however late this comes, attention now needs to turn immediately to getting other vaccine-producing countries to follow."

"How could we have a situation with a global pandemic, and you keep considering vaccines a commodity?" said Hassan, the South African campaigner. "It was and is absurd. In a sense, it was rich countries and their pharmaceutical companies saying that intellectual-property claims and the interests of shareholders on a very narrow set of items mattered more than the lives of millions of people -- people in the global south, in particular."

And some want more from Washington, saying a waiver is a helpful but insufficient step toward ramping up vaccine production.

"The US must also demand that pharma companies that received significant amounts of US taxpayer funding to create these vaccines share the technology and know-how with other capable manufacturers to protect more people worldwide," Doctors Without Borders said in a statement.

Meanwhile, after months of supply shortages and embarrassing blunders, Europe's vaccine campaign is at last sprinting ahead, renewing hopes that the continent might meet its initial inoculation goals and tame the virus even while relaxing restrictions.

Across the European Union, countries are touting new daily vaccination records. Supply concerns have eased. The EU is now administering roughly the same number of daily per-capita doses as the United States, trending up while America trends down.

Some European countries have helped their cause by sorting out logistical problems or enlisting family doctors and pharmacists to administer shots. But the bloc, more broadly, owes its turnaround to a deepened reliance on Pfizer-BioNTech, which has ramped up vaccine production as other options have faltered or come too slowly.

France's pace of daily doses has increased 60% over the past month. Italy has accelerated by 90%, Germany by 145%.

While the United States has doses widely available to any adults who want them -- and is struggling to find takers -- many people in the EU are not yet eligible. But appointments are starting to open up in Europe, even for younger groups.

EU officials, noting Biden's target of getting at least one dose to 70% of U.S. adults by July 4, say that by midsummer Europeans and Americans will be in roughly the same situation.

"The U.S. has a similar goal, and this shows how much our vaccination campaigns are aligned by now," said von der Leyen of the European Commission.

The EU has administered at least one dose to 30% of its total population, compared with 45% in the United States, 52% in Britain and 60% in Israel. 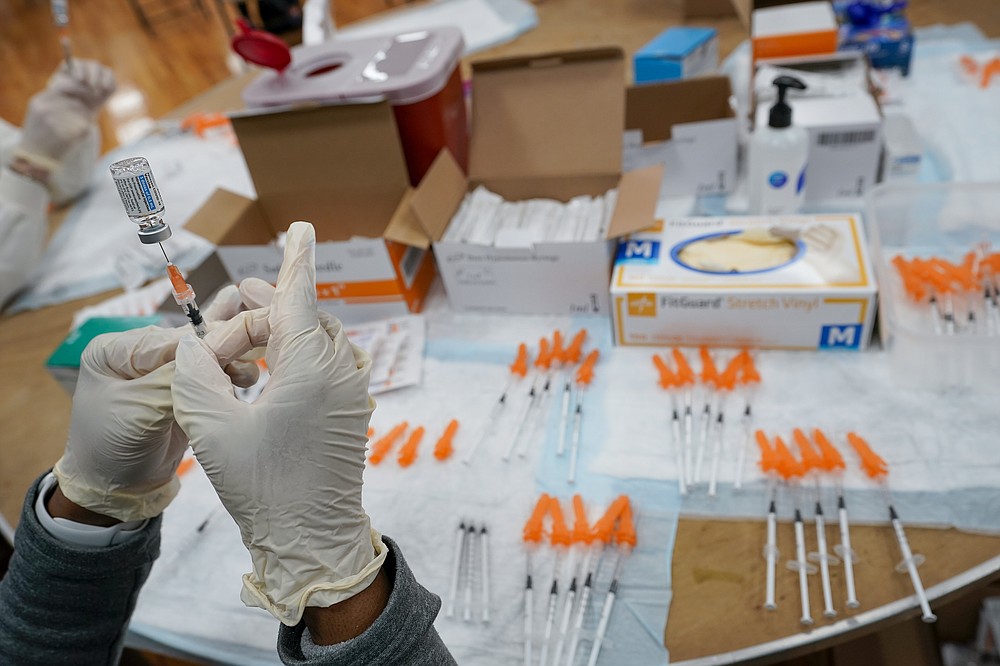 FILE - In this April 8, 2021, file photo, a Northwell Health registered nurses fills a syringe with the Johnson & Johnson COVID-19 vaccine at a pop up vaccination site at the Albanian Islamic Cultural Center in the Staten Island borough of New York. The Biden administration on Wednesday, May 5, joined calls for more sharing of the technology behind COVID-19 vaccines to help speed the end of the pandemic, a shift that puts the U.S. alongside many in the developing world who want rich countries to do more to get doses to the needy. (AP Photo/Mary Altaffer, File) 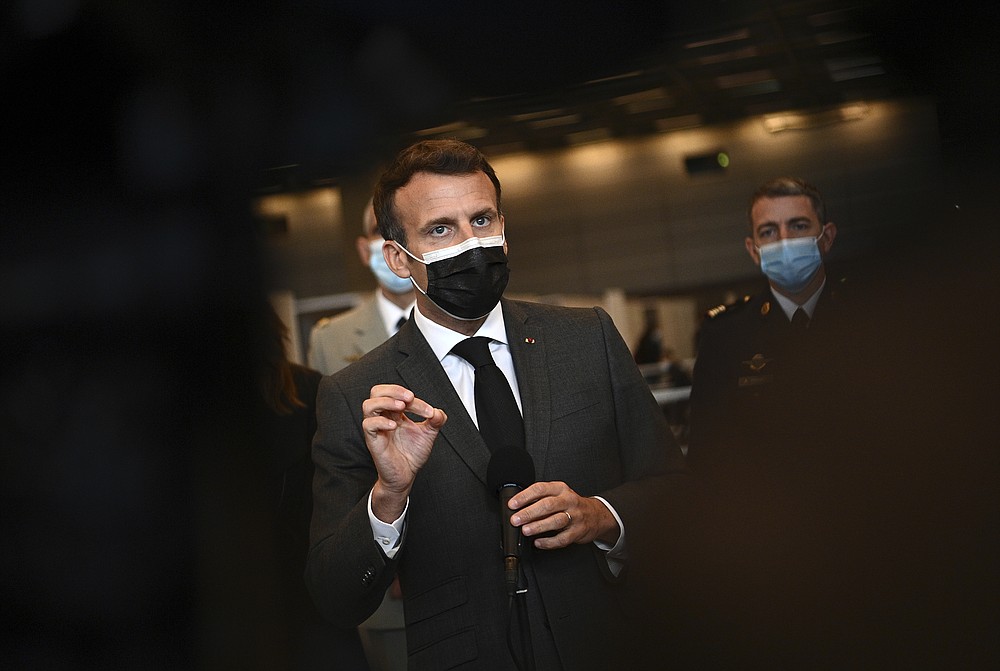 French President Emmanuel Macron talks to the press as he visits a giant vaccination center against the Covid-19 during its inauguration at Porte de Versailles convention centre in Paris, Thursday, May 6, 2021. (Christophe Archambault, Pool Photo via AP)
ADVERTISEMENT