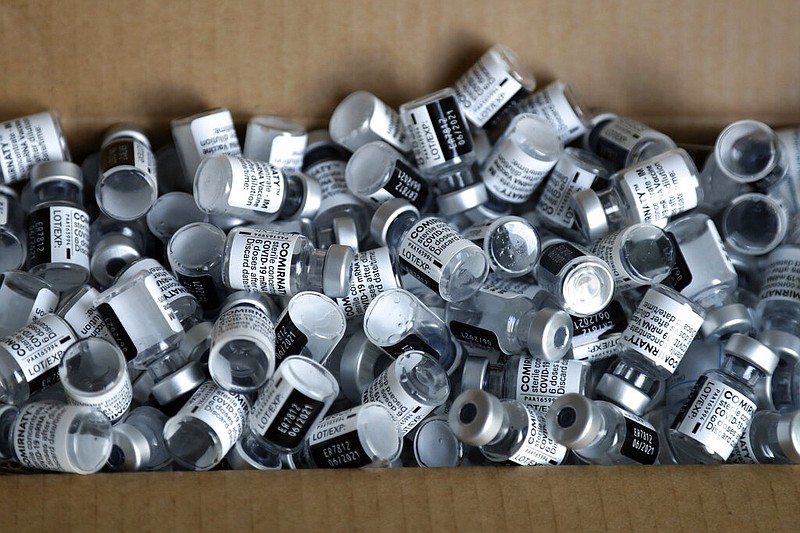 Empty vials of the Pfizer-BioNTech covid-19 vaccine lie in a box in this March 19, 2021, file photo. (AP/Matthias Schrader)

President Joe Biden is running out of Americans willing to roll up their sleeves for covid-19 shots, dragging out the nation's bid to vanquish the pandemic and forcing the administration to refocus its strategy.

Biden and his aides detailed the latest phase of his pandemic response this week as domestic demand for vaccinations dries up and inoculations slide. The U.S. is now giving an average of 2.13 million shots a day, down from 3.37 million about three weeks ago. And Tuesday, which has the lowest shots of any day of the week, fewer than a million were given for the first time since February.

The administration announced this week that it would concentrate more on smaller clinics and mobile sites in rural areas, while planning to wind down mass-vaccination sites.

The low-hanging fruit in the U.S. campaign is gone, and the modesty of Biden's latest goal reflects the challenge. He has pledged about another 100 million shots in the next 60 days. That's the same pace as his first 100 million, when vaccines were at a premium, but roughly half the pace of his second 100 million.

"It's going to get more granular, I think, rather than large," Biden said at the White House this week.

He again pleaded for Americans to get shots and cast the slowdown as long expected.

"At the end of the day, most people will be convinced by the fact that their failure to get the vaccine may cause other people to get sick and maybe die," he said.

Biden's challenge would be the envy of nearly every other country -- a surplus of shots and a shortage of willing people's arms. Across the U.S., 57% of adults have received at least one dose. Biden hopes to hit 70% by July.

[Video not showing up above? Click here to watch » https://www.youtube.com/watch?v=laxMi9uMNZI]

The impact of a slowing inoculation rate remains unclear. U.S. covid cases are falling, with the seven-day average of new cases now 12% lower than the week before. The Centers for Disease Control and Prevention published research Wednesday that modeled trend lines for U.S. case numbers in several scenarios. In two of them, high vaccination rates drive new cases down to nearly nothing by September, while two models with lower vaccination rates still forecast a decline, though not as sharply.

"These modeled scenarios show that ongoing efforts to continue to increase vaccination coverage and maintain physical distancing, masking, isolation, and quarantine are warranted," the authors wrote.

"The results remind us that we have the path out of this," she said at a briefing Wednesday. But spreading variants of the virus could keep the pandemic simmering for months to come if vaccinations lag, she said.

"We need to keep vaccinating people, but we all need to keep practicing certain prevention interventions to help us get to the predicted good outcomes," she said.

Biden's team has backed away from predicting a threshold for herd immunity, when enough of the population is vaccinated to prevent the virus' spread. Biden's medical advisers have said "it's probably a phrase that doesn't really apply here to this particular virus in this circumstance," White House Chief of Staff Ron Klain told CNN this week.

Some experts downplay the vaccination slowdown, pointing to Israel, which saw a sharp decline in cases when roughly 40% of its population was fully vaccinated. As of now, 45% of people in the U.S. -- including children, who aren't yet eligible for shots -- have one dose and 32% are fully vaccinated.

Some level of decline was inevitable. "While I want to have as high a vaccination rate as possible, I'm not worried about it," said Amesh Adalja, a senior scholar at the Johns Hopkins Center for Health Security. The point of vaccinations was to reduce covid-19 hospitalizations and deaths, and high uptake of shots among more vulnerable people has already begun to do that, he said.

"We knew that, when we went into the general population, there was going to be less of a motivation for vaccination, and we would hit a wall, but we're still seeing the benefits of the vaccine," he said.

Biden's team has downplayed the slowing pace of shots. It draws a distinction between the holdouts -- some are skeptics, while others are willing to get the shots but simply won't seek it out. Polls show that the number of people who say they won't get the shot has been falling.

The White House has worked for months "to get prepared to make sure that vaccines find people if people aren't going out of the way to find them, to make it easy, and to make sure that people's questions get answered," adviser Andy Slavitt said Wednesday.

• Making vaccines easier to find. The government has created a text-message tool and websites for people to find appointments, and has ordered pharmacies to make more walk-in appointments available.

The administration also will begin shipping more vaccine to rural health clinics and mobile sites, in part to focus on the roughly 10% of Americans who live more than 5 miles from vaccine sites.

Biden is also working with businesses to set up incentives for people to get shots. For example, his team Wednesday touted discounts offered at Safeway stores, CVS Health stores and Target for people who get vaccinated.

• Working to persuade reticent Americans to get shots, urging them to talk to their doctors, pharmacists, faith leaders or vaccinated neighbors. "Nearly 85% of seniors have had at least one vaccination shot, and the wide cross-section of the nation trust the vaccine regardless of race or ideology," Biden said.

"Now we need to make that same progress for those under 65 years of age." Biden appealed to younger people to get the shots. "Even if your chance of getting seriously ill is low, why take the risk when you have a safe, free and convenient way to prevent it?"

• Preparing a push for vaccinating adolescents. Pfizer's shot may soon be authorized for children 12-15 -- potentially opening eligibility to millions who can't get shots now. If authorized, the administration will move quickly to distribute shots through existing channels, including about 20,000 pharmacies, as well as through pediatricians' offices.

Biden will push to get as many teenagers as possible their first shots by July to ensure they're fully vaccinated in time for school in the fall.

The vaccines being administered in the U.S. were authorized for use because they dramatically reduced the risk of getting covid-19 when tested in clinical trials. However, those trials didn't test the vaccines' ability to prevent a coronavirus infection -- the first step on the road to covid-19.

Scientists suspect the vaccines do thwart infections to some extent. Two new studies bolster their case.

Both studies compare infection rates among vaccinated and unvaccinated people who work at a single medical center. And in both cases, being vaccinated was associated with a significantly lower risk of testing positive for an infection.

Hospital employees make good study subjects because they were among the first people to get access to vaccines. That means they have a longer track record to mine when it comes to assessing the performance of the shots.

Another upside is that many hospitals routinely screen their workers for coronavirus infections. That makes it possible to identify people who seem healthy but harbor the virus in their systems -- and have the potential to spread it to others.

Unlike in a clinical trial, the hospital workers in these two studies decided for themselves whether to get the vaccine or not. There was nothing random about it.

That means that if infection rates are different for vaccinated and unvaccinated workers, it might be because of factors other than the vaccine itself. Perhaps the people who made a point of getting the shots were also more likely to wear masks, wash their hands thoroughly or take other actions to avoid getting sick.

Still, until better data are available, studies like these can provide some insight into whether covid-19 vaccines prevent infections as well as disease.

The first report comes from St. Jude Children's Research Hospital in Memphis, where workers started getting the Pfizer-BioNTech vaccine on Dec. 17. By March 20, 3,052 workers had received at least one dose, including 2,776 who got both doses. Another 2,165 workers who were eligible for the vaccine declined to take it.

Over the three months, 51 people tested positive for an infection after receiving their first dose of vaccine, and 29 of them never developed covid-19 symptoms. Meanwhile, 185 of the unvaccinated people became infected, and 79 of them were asymptomatic.

After crunching the numbers, biostatistician Li Tang and her St. Jude colleagues determined that people who'd had at least one dose of vaccine were 79% less likely than their unvaccinated co-workers to become infected. They were also 72% less likely to develop an infection that was asymptomatic.

This apparent protection was more powerful in people who got both doses of the vaccine and had time for that second dose to kick in. Hospital workers who were at least seven days out from their second shots were 90% less likely than their unvaccinated counterparts to become infected, and when they did, their infections did not produce symptoms.

The second study took place at Tel Aviv Sourasky Medical Center in Israel, where workers started getting the Pfizer-BioNTech vaccine on Dec. 20. By Feb. 25, 5,953 of them had received at least one dose, and all but 436 of them had gotten both doses. Another 757 workers remained unvaccinated.

Altogether, these workers were tested for infections 16,224 times, and 243 of those tests came back positive. In 149 of those cases, the infection led to covid-19 symptoms -- 64 of them in people who had been vaccinated and 85 in the much-smaller group of those who hadn't.

Researchers led by Dr. Yoel Angel calculated that people who were fully vaccinated were 97% less likely than their unvaccinated peers to develop infection with symptoms. Even among those who were only partially vaccinated, the risk of a symptomatic infection was 89% lower.

Another 63 people who'd had at least one dose of vaccine were found to have asymptomatic infections, as were 31 workers who skipped the vaccine.

The researchers calculated that people who were fully vaccinated were 86% less likely than their unvaccinated counterparts to develop asymptomatic infection. Even those who had only one dose of vaccine saw their risks fall by 36%.

Both studies were published Thursday in the Journal of the American Medical Association.

Information for this article was contributed by Josh Wingrove of Bloomberg News (WPNS) and by Karen Kaplan of the Los Angeles Times (TNS).