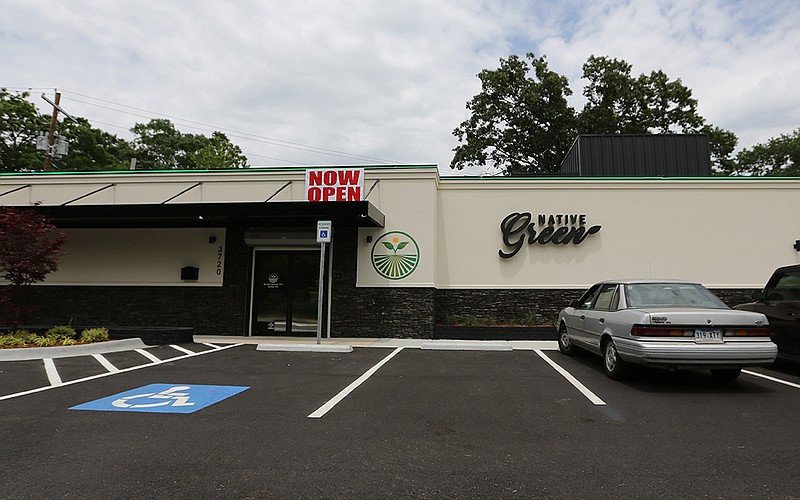 Native Green Wellness at 3720 Cantrell Road was first awarded a license in the state's capital in June 2020. The business started serving customers Thursday and had a grand opening Friday.

It's the seventh dispensary in Central Arkansas, joining two others in Little Rock and one each in Alexander, Sherwood, Conway and Hensley.

Kattie Hansen is CEO and owner of Native Green Wellness in Little Rock. Her father, Walter Koon, is a co-owner.

Hansen previously owned the Native Green Wellness dispensary in Hensley, a small community southeast of Little Rock, but divested her interest in the business to her husband, Fredrik Hansen, and four other business partners in the spring of 2020, she said. State law bars an individual from owning an interest in more than one medical-marijuana business.

Hansen said Friday afternoon that the Little Rock location had already seen a lot of medical-marijuana patients who were excited about a location closer to them with a variety of products at different price points. She said more than 200 customers showed up when the business had its soft opening Thursday, according to a store manager.

"I think it will be a high-trafficked location," she said.

The state has issued a total of 38 dispensary licenses. Amendment 98, the constitutional change approved by voters in 2016, caps the number of licensed dispensaries in Arkansas at 40. The Medical Marijuana Commission had until January to issue the remaining licenses allowed under state law.

A lawsuit that Green Thumb Industries Arkansas filed in July against the state Department of Finance and Administration argued that the Little Rock license was improperly awarded to Native Green Wellness because Hansen's mother, Anita Koon, held a minority stake in the new limited liability corporation that took over Native Green Wellness' license to operate the Hensley dispensary. However, the plaintiffs dropped the case in October.

A senior assistant attorney general representing the state said in an August motion to dismiss the lawsuit that Amendment 98 only prohibits an individual from owning an interest in more than one dispensary, so the commission did not violate state law when issuing the Little Rock license to Native Green Wellness.

Medical marijuana sales in Arkansas recently surpassed $300 million, state Department of Finance and Administration spokesman Scott Hardin said Tuesday. The first dispensary in the state opened in mid-2019, and since then Arkansans have spent $303.5 million to obtain 45,286 pounds of medical marijuana.