Future I-57 already has wheels in motion 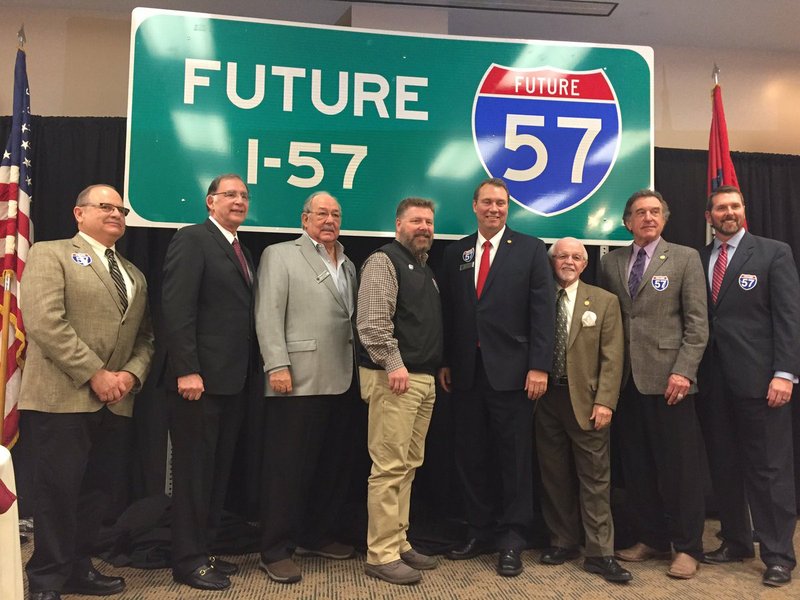 Future I-57 is still a ways in the future, but it already is paying dividends for Northeast Arkansas, Walnut Ridge Mayor Charles Snapp says.

The Future I-57 designation is limited to the 123-mile U.S. 67 interstate-like segment between North Little Rock and Walnut Ridge. North of Walnut Ridge, U.S. 67 remains a four-lane highway, but it's undivided. In Pocahontas, it turns into a two-lane highway.

Still, the designation was a factor that helped persuade a North Carolina steel fabricator to open a facility in Walnut Ridge, Snapp said.

CF-Steel will lease a warehouse in the Lawrence County city's industrial park this summer, lease an additional 2.5 acres for a holding yard and initially employ 15 people, he said. The company fabricates cold-formed steel trusses for a variety of building applications. The company wanted an operation in Northeast Arkansas to be closer to a main supplier, Big River Steel in Mississippi County, Snapp said.

Still, CF-Steel wouldn't have picked the area if it had not been for improvements made to area highways and the prospect of Future I-57 being completed, Snapp said. He mentioned the $12.8 million Paragould bypass on U.S. 412 that was completed last year and a $58.5 million project to widen a 14.3-mile section of U.S. 412 in Lawrence and Greene counties that will be finished next year.

"They reached out to us shortly after Christmas and they came in, they drove the roads, they looked at them, they've looked at the possible expansions of I-57, and this is proof positive that with these it's going to benefit all of us together," he said. Big River Steel is not in Lawrence County or Greene County, but that's how the regional effort is starting to work.

Snapp's comments came at an Arkansas Department of Transportation briefing on the status of the project. The briefing before several state, county and local elected leaders at Williams Baptist College in Walnut Ridge was organized by U.S. Sen. John Boozman, R-Ark., who had scheduled several stops in Northeast Arkansas on Friday.

Boozman authored a provision in the transportation budget bill four years ago to designate the Future I-57 route.

"Business owners, civic leaders and travelers all understand the importance of connecting Northeast and Central Arkansas to this major interstate because it creates economic growth and development opportunities and allows for increased ease of movement," Boozman said in a statement after the meeting. "I am pleased to have been updated on the latest developments with the effort to plan and complete the construction of an interstate-quality highway and bring I-57 from the Missouri border all the way to North Little Rock. I look forward to further helping make this vision a reality."

The briefing underscored the challenges to make I-57 a reality, but also highlighted how far the Future I-57 has come since the first segment of U.S. 67 was built in 1956.

It took until 2016 and more than $700 million to construct the 123-mile segment between Interstate 40 in North Little Rock and U.S. 412 in Walnut Ridge to interstate standards, said Alec Farmer of Jonesboro, a member of the Arkansas Highway Commission.

To build the same segment today would cost more than $1 billion, he said.

"The state has already made a tremendous investment in this corridor, and only a little over 40 miles are left to reach the state line," Farmer said.

Planning on the remaining 40 miles to the Missouri border began six years ago. The potential routes have been narrowed to three alternatives that are being evaluated, an effort that will last until next spring, according to Farmer. Their estimated costs range from $403 million to more than $600 million, he said.

Once the environmental clearances are obtained by the end of 2022, attention will turn to how to pay for the project, Farmer said. The department's current statewide transportation improvement program for 2021-24, which identifies all work the agency will undertake and the money to pay for it, identifies $32 million for preliminary engineering in the I-57 corridor.

Voter approval of Issue 1 on November's ballot also proved "incredibly important," Farmer said. Issue 1 makes permanent a 0.05% statewide sales tax for road and bridge construction. A total of $180 million in Issue 1 money spread over 10 years has been identified for I-57, he said.

"We are making progress," Farmer said.

Lorie Tudor, director of the Arkansas Department of Transportation, said her agency was working with Missouri highway officials to make sure both states are on the same page in getting the route between Walnut Ridge and Sikeston, Mo., built.

"It takes a lot of coordination," she said.

Washington also might provide some help if Congress can pass a new highway bill. President Joe Biden is pushing his $1.6 trillion infrastructure proposal that would be paid for by rolling back the 2017 tax cuts signed into law by President Donald Trump and raising the corporate tax rate from 21% to 28%.

Several GOP senators have countered with spending $568 billion on infrastructure over five years, a fraction of what the Democratic president has proposed, which appears to be too large a gap to close.

But Boozman said he wouldn't rule out a deal.

"There's a willingness on both sides to compromise," he said.

Farmer said the significance of closing the gap on Future I-57 in Northeast Arkansas cannot be overstated.

He recalled his own father, the late Dalton Farmer, who also served on the state Highway Commission.

"He was on there when U.S. 67 was crossing the White River -- the bridge was being built," Farmer said. "It marked the connection of Northeast Arkansas, in his opinion, to the rest of the state. He was really proud of that. We were going to have a four-lane ... going to Little Rock.

"While this was significant for our region, completing I-57 is on a whole other level. Once completed, our region will be connected to the rest of the country with an interstate highway running over 600 miles from Chicago to North Little Rock. It can also help connect us better to St. Louis and other Midwestern cities, as well as Texas, Louisiana and the western United States."