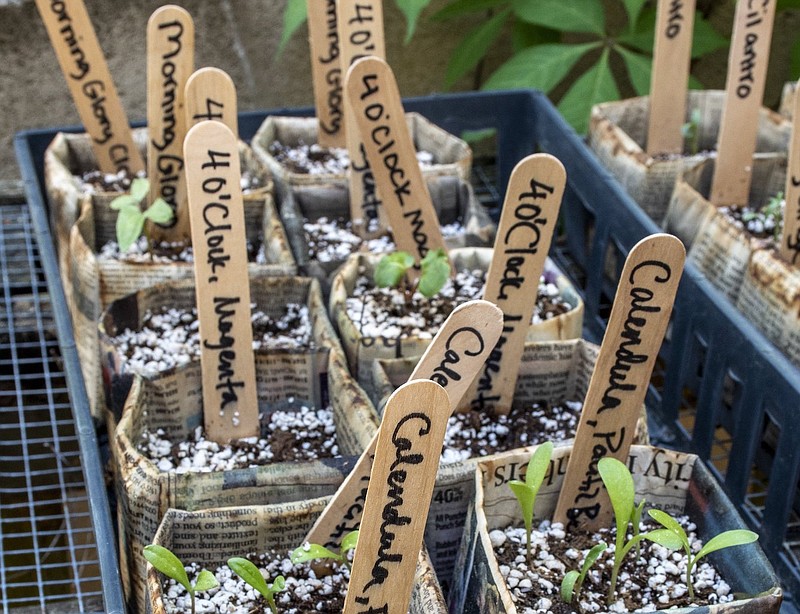 These plants were sprouted from seeds in the CALS Seed Library. (Arkansas Democrat-Gazette/Cary Jenkins)

The ways Central Arkansas Library System serves patrons is growing all the time. There are, of course, books, movies and music available for loan, as well as fishing poles, toys, tools and now ... seeds.

The CALS Seed Library, housed at the Sidney S. McMath branch, 2100 John Barrow Road in Little Rock, was borne of a concern about the sudden scarcity of fresh produce in grocery stores at the start of the covid-19 pandemic last spring.

Vanessa Scroggins sprouted a plan that would allow people to "borrow" as many as five types of seeds to start a vegetable, herb or flower garden at their homes and later "return" them — or, rather, some of the seeds harvested from whatever grows from the borrowed seeds.

"Basically people can come in and they fill out a form and they'll list whatever seeds that they take," Scroggins says. "The idea is that after they harvest and grow their crops, they bring some seeds back, so we keep the library going."

"We use a lot of their templates," she says. "The majority of the seeds came from the Baker Creek Heirloom Seed Co. They did a really nice donation for that. And then Ann Green Healing Waters, a local group, donated some stuff to us, too." 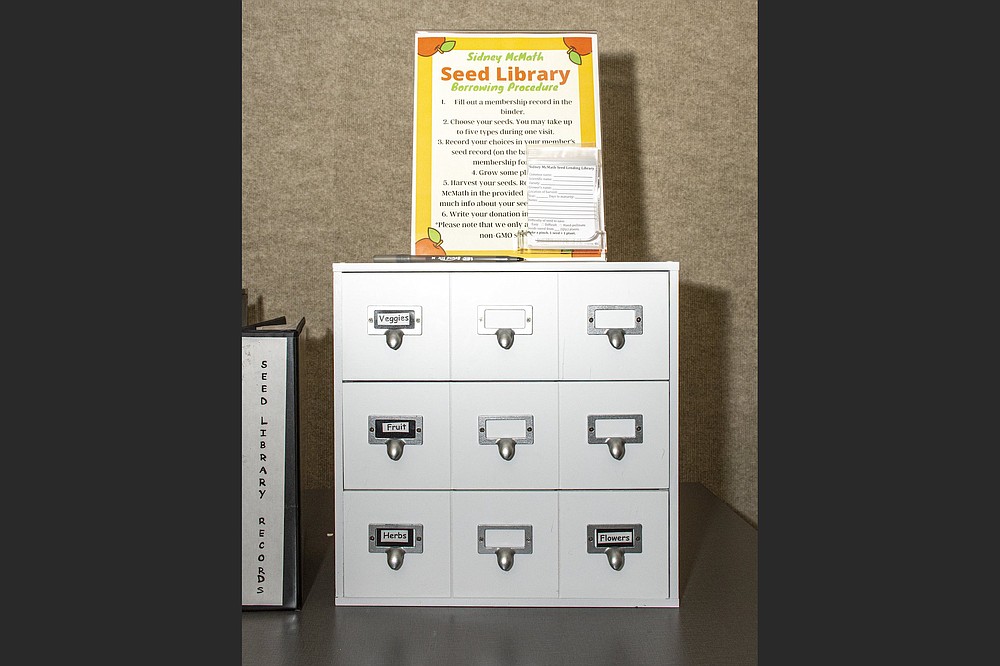 Seeds in the CALS Seed Library are organized in a repurposed card catalog. (Arkansas Democrat-Gazette/Cary Jenkins)

Scroggins has a list of the easiest plants to start with when learning to harvest seeds, but for those who feel like that is beyond their ability there are options.

"We just ask that they make a donation of a purchased package of seeds, but it's not a requirement," Scroggins says. "We do ask that they be non-GMO and heirloom only, mainly because of patent issues."

The seeds are housed in an unassuming card catalog near the front door at McMath, on a table next to two thick binders — one holds forms filled out by people who have borrowed seeds and one holds colorful packets showing some of the seeds that can be borrowed from the library.

Not many harvested seeds have been returned to the library as yet, likely because the Seed Library got a late start last summer and libraries were not fully operational throughout the pandemic.

"We have these little forms that go on the front of every seed packet, and they have information like the name, common name, the date of harvest, and then any information I can provide about where it was grown," Scroggins says. "The ones that we distribute have a lot more detailed information, like spacing, and, you know, sound requirements and things like that. We just asked whatever information they can give us that we fill out on that sticker that goes on that package." 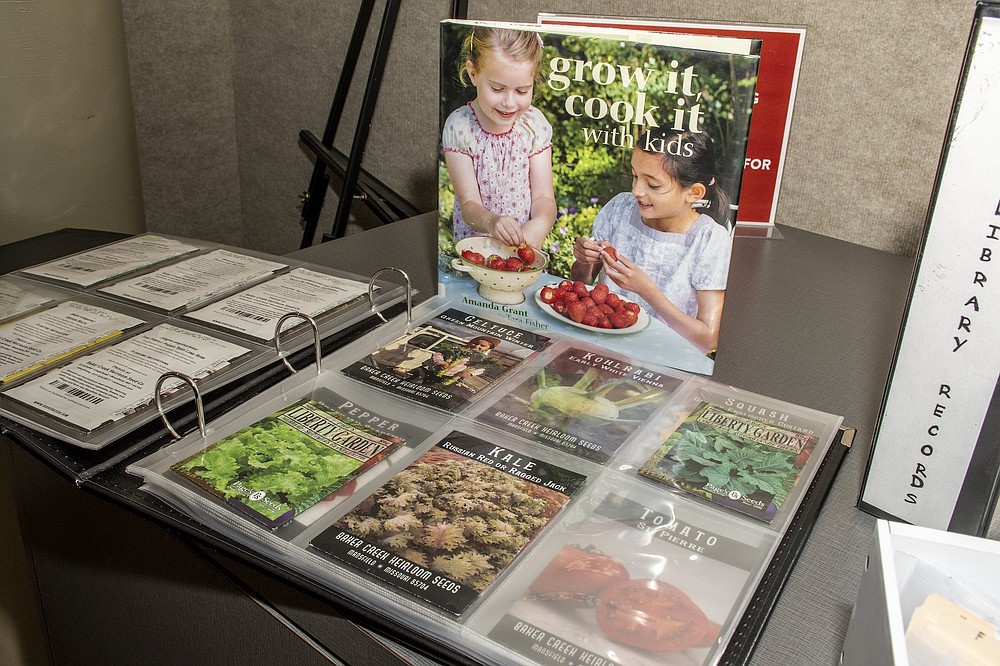 Seed packets are kept in a binder that contains information about the plants that will grow from the seeds. (Arkansas Democrat-Gazette/Cary Jenkins)

Patrice O'Donoghue, cataloging librarian at the Hillary Rodham Clinton Children's Library, has borrowed seeds. She has also given the seed library seeds from some of the plants grown in that branch's learning garden.

"That makes me very happy because they're locally grown, so the plants are going to be hardier. They're going to be more used to our climate," Scroggins says.

Farm Corps member Katie Matthews, one of 17 who serves in Central Arkansas, works with O'Donoghue at the Children's Library, and she has also borrowed seeds for personal use.

"The seed library is really cool," she says. "I would love to see it get bigger and more known."

The seed library and other CALS initiatives dovetail with Farm Corps' mission.

"Our three big components are farm, teach and outreach," Matthews says of Farm Corps, which works through schools, community centers and libraries to create gardens and educate about how to grow and maintain gardens and prepare meals using fresh produce. "I feel like Farm Corps has really connected a lot of the existing urban agriculture community that has already been going on in Little Rock for so long."

Matthews says that, with the addition of the seed library, CALS is poised to help people who might not otherwise have branched out into growing their own food.

"The biggest things that keep lower income individuals from gardening is time, money and finding resources like soil and seeds, so this is really helpful," she says. 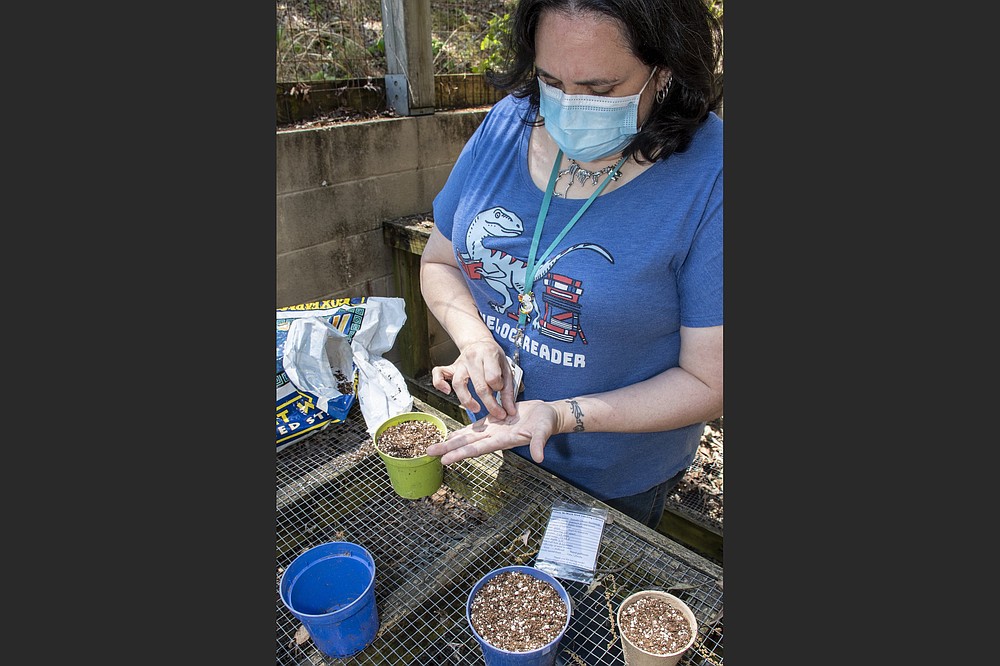 O'Donoghue, Scroggins and others have offered advice about how to grow plants in containers that people already have lying around — hay bales, old tires, buckets, bags and more — as well as how to fold toilet paper rolls or newspaper to create biodegradable pots that can be planted in the soil.

Rachel Partridge, a Farm Corps member assigned to the new garden at Chicot Elementary in Little Rock, heard about the seed library from Matthews.

"We were really not sure [what] our budget would be or how to get started with the garden at Chicot so we went just to see what they had," she says. "I think we took some carrots and tomatoes, some cosmos flowers, some marigolds and a couple of other things. Some of them I used for my own home garden as well."

The budget allowed them to buy more seeds than they expected, Partridge says.

"I expect we'll have quite a bit left over and I plan to donate a little bit of everything we got back to the seed library," she says.

Partridge knows there are meetups arranged around seed and plant trades, although those are sometimes sporadic.

"You just have to know when those things are happening," she says.

Plant Friends of Little Rock, for example, posts details about meetups on its Facebook page. It's spearheaded by K.G. Kiefer, now of Fayetteville, who has a passion for gardening after growing up on a farm and also learning about plants from her grandmother. 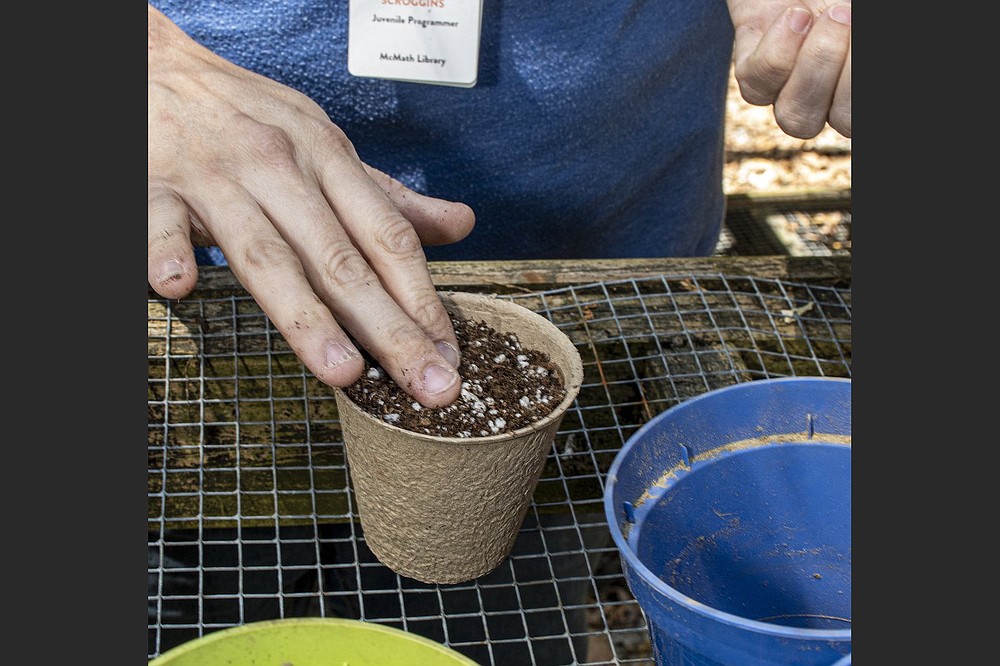 "You can bring as much as you want and we do plants, we do clippings, there are really no boundaries," Kiefer says. "It's more of a networking thing than a beginner thing but there are always people willing to help."

Partridge says that the seed library, with its regular hours and location, is a good starting point for people who are interested in gardening and she is happy to see the library's involvement in that area.

"I've learned just how much more of the library does for the community than just books. They'll print your stuff, they'll help you with your taxes ... you can check out a musical instrument or use a 3D printer. And you can get some seeds from the seed library and learn how to seed save, which I think is an even more [of a] lost skill than just growing food," Partridge says.

"There were people who undervalued, I guess, libraries and what they can do, what they can provide for a community and what their purpose is, and adding gardening into this, where maybe it wasn't before, just really enriched what libraries are already doing and the kind of community that these kinds of activities build."

Farm Corps members not only borrowed seeds from the seed library to start community gardens, like the new one at Millie Brooks Library in Wrightsville, they borrowed tools from the Tool Library at Dee Brown Library to get their jobs done as well.

The tool library, says CALS staff member Rachel Tanner, is a "best kept secret," offering patrons loans of up to five tools at one time.

'WE HAVE SAFETY GEAR' 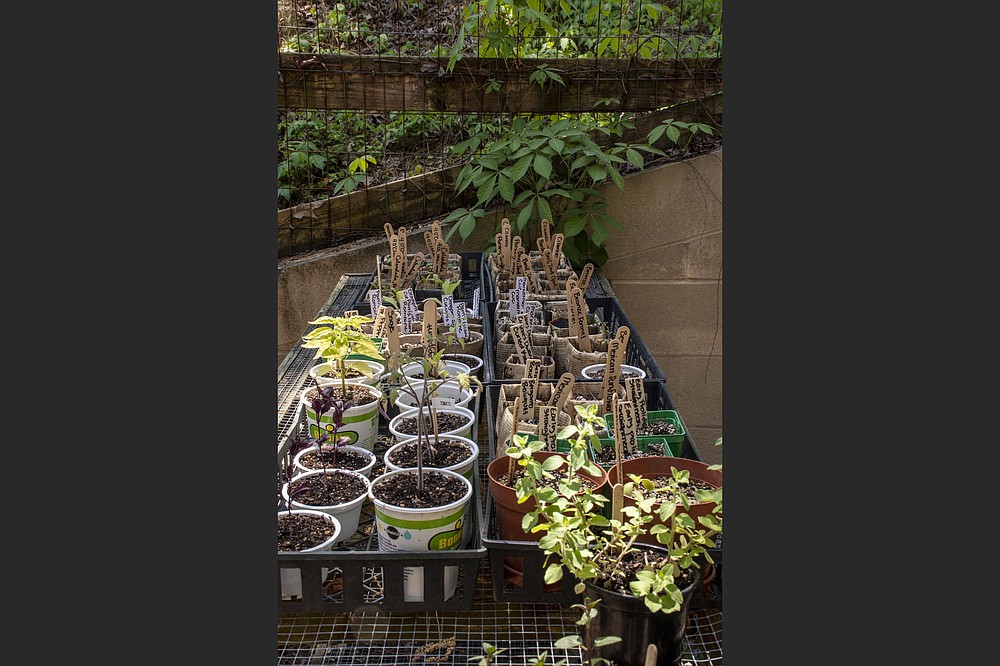 These herbs and flowers were grown from seeds in the CALS Seed Library. (Arkansas Democrat-Gazette/Cary Jenkins)

"If you don't have your own power drill you can borrow one and you only need wood and screws to put together a raised garden bed," she says. "Well, you would want a power drill and a hand saw. You might want to borrow a measuring tape, if you don't have one of those. We have safety gear — gloves and safety goggles, and a shovel and wheelbarrow is what I've suggested. We also have an electric garden tiller, if you want to just do an in-ground garden."

CALS Outreach Coordinator Courtney Jones says the garden at Millie Brooks was built in an attempt to address food insecurity in that area.

"Out in Wrightsville, the only place to buy food is at the Dollar General, and they don't offer fresh fruits or vegetables," Johnson says. "There's just a real vacuum where there's some healthy food opportunities."

The library is growing vegetables to share with the community, says Johnson, but people in the community can also reserve garden space for personal use.

"Not everybody has ideal growing conditions at home, and we pretty much created them there with the raised beds and the really good dirt," she says.

There are, of course, a plethora of books, videos and articles about gardening available for the asking from all of the CALS branches, and Scroggins and other library staff are happy to share their knowledge about gardening.

"I love to help people out," Scroggins says. "I don't want people to be intimidated. Some people might be more comfortable with seedlings instead of just actually planting seeds. So ... we hope to be able to have a good amount of seedlings for people to take home if they want to try that."

"We have a lot to learn too," she says. "... there's some wonderful gardeners out in every community so come teach us and stuff, too."