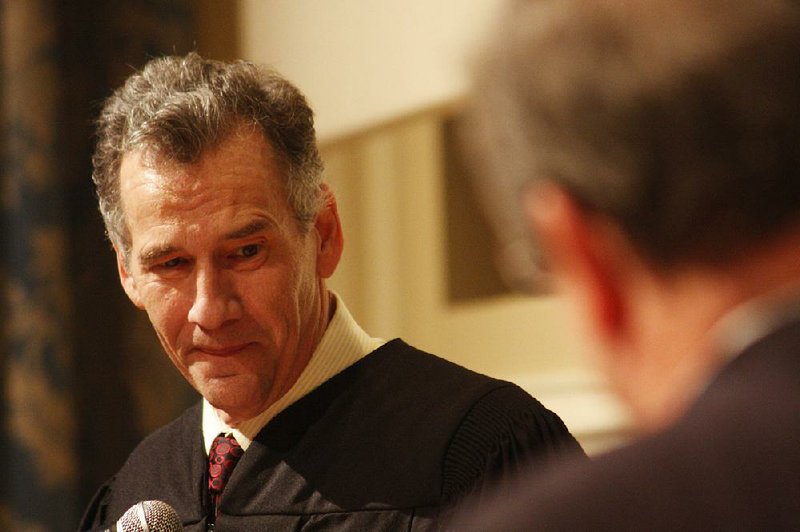 Attorneys for Gulfside Casino Partnership and Cherokee Nation Businesses, as well as counsel for the Arkansas attorney general's office, spent the hour-and-a-half hearing debating the constitutionality of a casino endorsement letter from a former Pope County official.

Pulaski County Circuit Judge Tim Fox listened intently to the arguments, asked several questions, then said he was taking the issue under advisement and would issue a ruling later.

Citing coronavirus restrictions, Fox limited attendance to court personnel, one attorney per side and a party to the case. The Arkansas Democrat-Gazette had earlier been denied both in-person and video access, and the judge issued an order Friday morning rejecting the newspaper's formal request for access.

But then Fox announced at the start of the proceedings that he was opening the hearing to the "general public." The Arkansas Democrat-Gazette reporter was told to stand at the back of the courtroom during the hearing. Fox did not respond to a request for an interview to ask what prompted the last-minute courtroom opening.

The hearing was scheduled after the Arkansas Supreme Court in February reversed Fox's previous decision to deny Cherokee Nation Businesses' request to intervene in the case. His goal for Friday's hearing, Fox said, was "not to have multiple appeals" and to keep the issue from dragging through the courts for years.

The case was filed by Gulfside in 2019 after its license application was initially denied by the state Racing Commission because its letter of support was signed by then-County Judge Jim Ed Gibson, just days before his term expired on Dec. 31, 2018.

Fox had ruled unconstitutional a state law and a Racing Commission rule requiring that the endorsement be obtained from county and city officials holding office at the time of the submission of an application for a casino license.

Fox said in that ruling that the state law and the gambling rule added extra requirements that were not allowed to Amendment 100.

Amendment 100, approved by voters in 2018, authorized the expansion of gambling operations at racetracks in Hot Springs and West Memphis into full-fledged casinos and allowed new casinos in Jefferson and Pope counties.

The Racing Commission compared Gulfside and the Cherokees' applications, and on June 18, selected Gulfside to build and operate a casino in Pope County based on its total score of 637 for Gulfside compared with 572 for the Cherokees.

More litigation was spawned when the Racing Commission denied Cherokee Nation Businesses' appeal of that decision.

Cherokee Nation Businesses -- which later resubmitted its application to the Racing Commission after gaining support from Ben Cross, the current Pope County county judge, as well as from the Pope County Quorum Court -- argued that Gulfside's endorsement letter doesn't meet the constitutional requirements of Amendment 100 that a casino applicant must have such backing.

Amendment 100, Calhoun said, uses the word "the" when referring to the county judge and other officials.

After the hearing, Calhoun said Cherokee Nation Businesses appreciated Fox allowing the parties to focus on the constitutional question at Friday's hearing.

"The plain language of Amendment 100, an Act of the Legislature, and a Rule of the Racing Commission state that an 'applicant' must submit a letter from 'the County Judge.' When Gulfside became an 'applicant,' Jim Ed Gibson was not 'the county judge,'" Calhoun said in an email. "Thus, Gulfside's application was correctly disqualified. The Supreme Court will ultimately decide the constitutional question once the parties receive Judge Fox's decision."

Lucas Rowan, legal counsel for Gulfside, argued that the "county judge" referred to in Amendment 100 is an office, not a person.

If the drafters of the constitutional amendment wanted to further define that the endorsement must come from officials serving at the time of the application, then it would have been included, Rowan said.

Much like pardons issued by a governor before leaving office do not have to be reissued by the new administration, it's not necessary for Gulfside to obtain a new endorsement, Rowan said.

Kat Guest, senior assistant attorney general, said that while "the" was the operative word in the argument, the other word is "applicant."

"At the time Gulfside got the letter, they were not an applicant," she said.

The Democrat-Gazette on Thursday had filed a motion to intervene in an attempt to gain access to the hearing -- either by electronic remote access or in person -- after numerous unsuccessful attempts through the week to arrange access.

Fox denied the motion at 8:07 a.m. Friday, less than an hour before the hearing was to begin.

Greer met the reporter outside the courtroom and said, "you have to stand in the back by the wall."

Of the eight people in the courtroom, only the Democrat-Gazette reporter was required to stand for the duration of the 90-minute hearing.

The gallery was devoid of chairs and a wooden pew was turned backward and pushed against the wall.

The "general public" has "no interest relating to issuance of the casino license itself," Fox wrote.

Fox referred to a March 16, 2020, executive order from Pulaski County's County Judge Barry Hyde, the county executive, that restricts public access to certain county buildings because of the coronavirus pandemic.

Hyde said previously that the order never closed courtrooms, and individual judges could give -- and have given -- access to the anyone they chose.

The Democrat-Gazette reporter contacted Fox's office Monday to request approval to attend the hearing or to be provided the link and access code necessary to view a livestream of the proceedings.

The Democrat-Gazette left messages for Greer and for Fox for two days, then submitted a written "Request to Attend" on Wednesday.

Greer then called the reporter and said the hearing would not be livestreamed and that Fox was barring physical access because of Hyde's executive order.

The Democrat-Gazette reporter next submitted a written request for a hearing before Fox to register on the record an objection to his decision to close the proceeding.

Neither Greer nor Fox responded in any form and neither returned messages left through Thursday evening.

In answer to the Democrat-Gazette's request that the hearing, at the very least, be made available through remote video access, Fox cited in the motion Administrative Order No. 6 of the Arkansas Supreme Court saying that the decision concerning live-streaming or televising of any in-court hearings are at the discretion of the trial judge.

Other Pulaski County circuit judges have streamed hearings over video since the pandemic began. The public can access the proceedings using a link and code provided upon request by a member of a judge's staff.

Fox said the Democrat-Gazette had the option of appealing to the Arkansas Supreme Court or taking action in federal court.