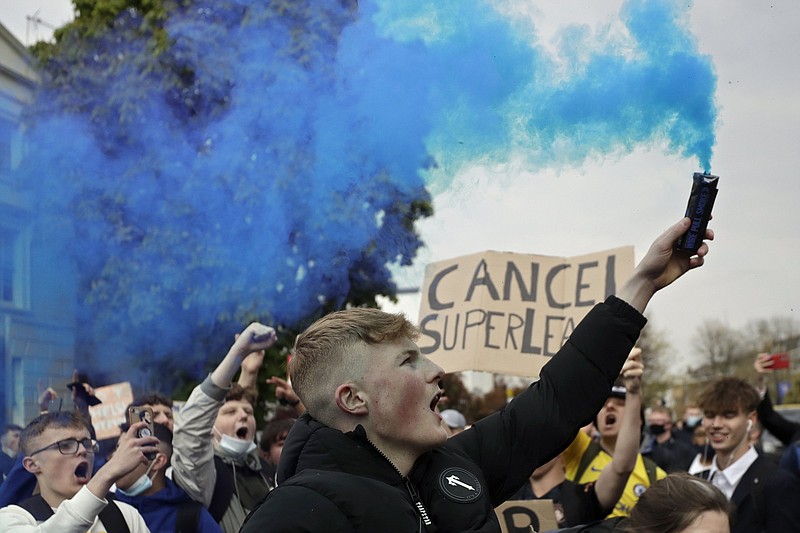 Chelsea fans protest April 20 outside London’s Stamford Bridge stadium against Chelsea’s decision to be included among the clubs attempting to form a new European Super League. Nine of the 12 clubs involved agreed to a peace deal with UEFA that includes fines of millions of dollars. (AP file photo)

Only nine of the 12 European clubs who launched an ill-fated bid to form a Super League have agreed to a peace deal with UEFA and accepted being fined millions of dollars.

The remaining trio of rebels are at risk of being banned from the Champions League for not renouncing the breakaway. Barcelona, Real Madrid and Juventus have refused to approve what UEFA on Friday called "reintegration measures," and they will be referred to UEFA disciplinary bodies for sanctions after backing the new largely closed competition.

The Super League project imploded three weeks ago after the English clubs -- Arsenal, Chelsea, Liverpool, Manchester United, Manchester City and Tottenham -- backed out inside 48 hours after a backlash from the fans and British government.

The Premier League clubs along with Atletico Madrid, AC Milan and Inter Milan have officially signed up to a settlement with UEFA to participate only in the existing open European competitions and accepted giving up 5% of revenue for the next season they play in a European competition. Teams from England and Spain reaching the final can earn more than $122 million.

The nine clubs also will make a combined payment of $18 million for what UEFA called a "gesture of goodwill" to benefit children, youth and grass-roots football.

"The measures announced are significant, but none of the financial penalties will be retained by UEFA," said Aleksander Ceferin, the UEFA president. "They will all be reinvested into youth and grass-roots football in local communities across Europe, including the UK. These clubs recognized their mistakes quickly and have taken action to demonstrate their contrition and future commitment to European football.

"The same cannot be said for the clubs that remain involved in the so-called Super League, and UEFA will deal with those clubs subsequently."

Ceferin previously told The Associated Press that the clubs not disavowing the Super League could be banned from UEFA's competitions.

"UEFA has reserved all rights to take whatever action it deems appropriate against those clubs that have so far refused to renounce the so-called Super League," UEFA said on Friday. "The matter will promptly be referred to the competent UEFA disciplinary bodies."

The 12 clubs were dubbed the "dirty dozen" by Ceferin in a heated period when he fought to prevent the clubs launching a competition that would lock in 15 places for teams for more than two decades, rather than having to qualify through annual domestic league placings as is required for the Champions League.

The nine clubs to sign up to UEFA's "club commitment declaration" will rejoin the European Club Association, which they quit April 18 when the Super League was announced, and they will terminate their legal involvement with the company.

The English clubs could yet face separate sanctions from the Premier League and Football Association, which is investigating their attempt to split from the established structure. UEFA indicated a desire for the agreement to settle with UEFA to serve as mitigation when domestic punishments are assessed.

UEFA said at the request of clubs it "will ask and support that due consideration be given by their respective national associations and national leagues to the spirit, content and purpose of the commitments given by the clubs to UEFA."