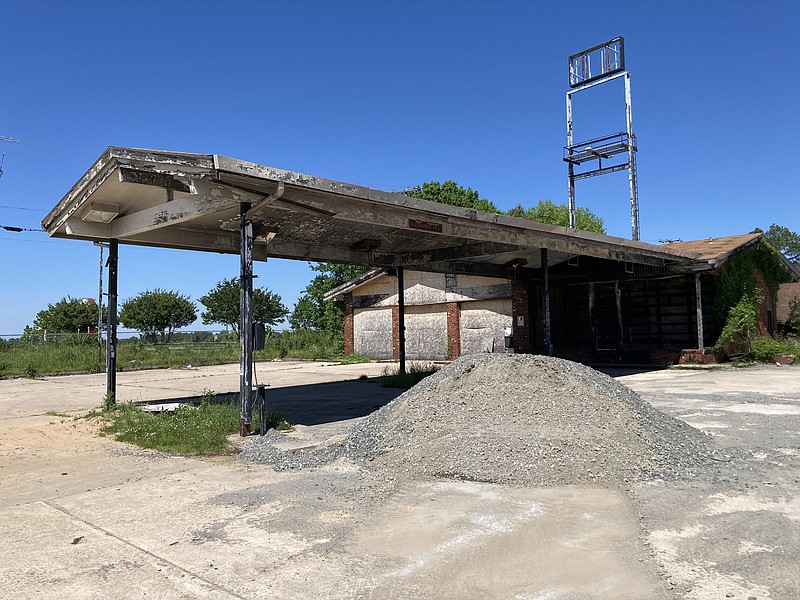 This property at 101 N. Walnut St. has been put on the city’s condemnation list, but the owner says he can’t get to it to make repairs because of material being stored on the site. (Pine Bluff Commercial/Byron Tate)

Pine Bluff wants a property owner to bring his structure up to code, but the owner says he can't restore the property because contractors use nearby land as a "dump site."

Wadeea Masoud of Little Rock, who owns what is left of a service station at 101 N. Walnut St., received a letter from the city stating his property had been put on a list of condemned structures, which means it will eventually be torn down by the city if measures aren't taken to restore the property.

Masoud, who was represented by Little Rock attorney Stephen Giles, joined a Zoom meeting of the city's Development and Planning Committee held this week. Masoud said he was eager to make repairs to his property but that the land around it was being used by Streetscape contractors to store heavy machinery as well as gravel and other material.

Masoud said he had tried several times to call Larry Matthews but never made contact with him. Matthews is director of the city's Economic and Community Development office and oversees the Streetscape project.

Maurice Taggart, director of the city's Urban Renewal Agency, which is working to improve conditions in downtown, pointed out that problems at the site had been going on for some time.

"It's been burned for awhile now," Taggart said.

Masoud confirmed the property burned in the past two to three years but said that it happened while the property had been rented. He said there had also been insurance problems associated with the fire.

Committee member Glen Brown Jr. said the property had been neglected "for years" and that the fire could not be blamed for the current condition of the structure.

"The property has not been neglected on our end," Masoud said.

Committee chairman Bruce Lockett said Masoud would first need to contact Lakishia Hill, the city's zoning official, and get the necessary paperwork for filing plans for restoring the property.

Masoud and Giles said they would contact Hill later in the week.

"We're not going to take it off the list," Lockett said, "but we will note that in 30 days, we will look at the plan you intend to put in action."

It was "vital" that the property, which sits at one of the main entrances into the city, is cleaned up, said Ryan Watley, executive director of Go Forward Pine Bluff.

He said the city can't dictate the type of business that goes in there, but that the old cars and oil stains that had been at the site and likely contributed to the fire, should not be there going forward.

Masoud was instructed to continue reaching out to Matthews when he asked about disposing of the debris on his lot.

"Are you sure?" Masoud asked. "I've been trying to get in touch with him since January."

When asked about Masoud's plans for the property, Giles said "he wants to restore it to its original condition," adding that the fuel tanks from when the property was a service station had been removed.

"He wants to put it back into use and get it off the city's list," Giles said. "Mr. Masoud is aware of the city's efforts to improve the downtown area, and he wants to help."

Contacted later in the week, Matthews said it was news to him that Masoud had been trying to get in touch with him.

"I don't have any messages from him and he hasn't been by the office," Matthews said. "I don't even know who the gentleman is."

Matthews said he had been told that Masoud was concerned about material being stored on his property, but that such a problem " would have been between him and the contractor."

The main contractor for the Streetscape project is Shields and Associates of Little Rock. The firm's general superintendent, David Foote, told The Commerical on Friday that he was unaware of the situation.

"I didn't realize there was some kind of issue," he said. "We spoke to some people on the site and thought it was good, but if there's a problem, I'll take care of it immediately. I sure don't mind doing it so that I can help. I don't want anyone angry at us."