Democrats pledge legal actions while governor waits to sign by ACACIA CORONADO THE ASSOCIATED PRESS | May 8, 2021 at 4:12 a.m. 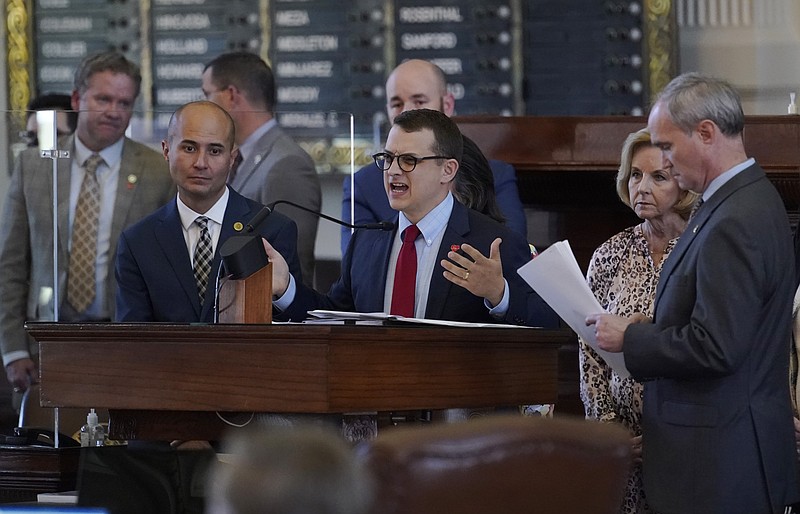 Rep. Briscoe Cain, R-Houston, center, stands with co-sponsors as he answers questions and speaks in favor of HB 6, an election bill, in the House Chamber at the Texas Capitol in Austin, Texas, Thursday, May 6, 2021. (AP Photo/Eric Gay)

AUSTIN, Texas -- Texas has become the latest Republican-dominated state to advance sweeping new limits on voting, despite no evidence of any problems with last year's vote and a coalition of state and federal officials calling the 2020 presidential election the most secure in history.

The GOP-led restrictions cleared the Texas House on Friday, starting with the key vote at 3 a.m. It followed hours of debate, and lawmakers are now likely to begin negotiating a final version that will need approval before heading to Republican Gov. Greg Abbott, who signaled an eagerness to sign it.

"One step closer to my desk & making it TX law," he tweeted Friday.

In Florida, Georgia, Iowa and now Texas, Republican lawmakers have used claims by former President Donald Trump and his allies to justify new voting restrictions. They argue the new limits, which largely target mail voting, are needed to boost public confidence and improve security. In some cases, the rules also create onerous requirements and penalties for local election officials.

In Texas, Democrats have virtually no path to stop the bill in the GOP-controlled Legislature, but they warned of legal fights ahead.

[Video not showing up above? Click here to watch » https://www.youtube.com/watch?v=2OrKD-Y0T8s]

"You have your vote, you have your majority. But guess what? I look forward to seeing you in federal court," said Democratic state Rep. Trey Martinez Fischer before a final procedural vote Friday that sent the bill back to the Senate. He added that "history is on our side."

The vote in Texas took place a day after Florida Gov. Rick DeSantis signed a wide-ranging list of new voting restrictions. New voting limits have also been signed into law in Georgia and Iowa. Republicans in Ohio and Michigan are also pressing ahead with overhauls of various election procedures.

"We are seeing the strong effect of President Trump's big lie. We are seeing the Republican Party go all-in on supporting him and his lies," said Sylvia Albert, voting and elections director for Common Cause, which advocates for expanded voter access. "We are seeing them use this opportunity to create deliberate barriers to voting for Black and brown voters. It's un-American."

House Democrats had dug in for a long fight starting Thursday, then struck an agreement with Republicans that significantly watered down some of what advocates called the most problematic aspects of the bill, which passed 81-64.

The amendments lowered initially proposed enhanced criminal penalties, allowed poll watchers to be removed if they breach the peace and clarified that election judges and volunteers wouldn't be held liable for honest mistakes. Additionally, they instructed the state to develop an online format for tracking early ballots and to send voter registration applications to high schools.

Republican state Rep. Briscoe Cain, who authored the House version of the bill, said some of the changes were in response to recommendations made by disability rights groups and the NAACP.

"We don't need to wait for bad things to happen to protect the security of the election," Cain said. "I don't believe that this is voter suppression; I believe it is voter enhancement."

Other restrictions in the bill would outlaw county officials from sending mail-ballot request forms to all registered voters, efforts that voting officials in Harris County put in place last year to expand ballot access when in-person gatherings were more hazardous because of the coronavirus pandemic. Harris County, which includes Houston, is a Democratic stronghold where 44% of the nearly 5 million residents are Hispanic and 20% are Black.

Information for this article was contributed by Christina A. Cassidy and Paul J. Weber of The Associated Press. Acacia Coronado is a corps member for the AP/Report for America Statehouse News Initiative. Report for America is a nonprofit national service program that places journalists in local newsrooms to report on undercovered issues. 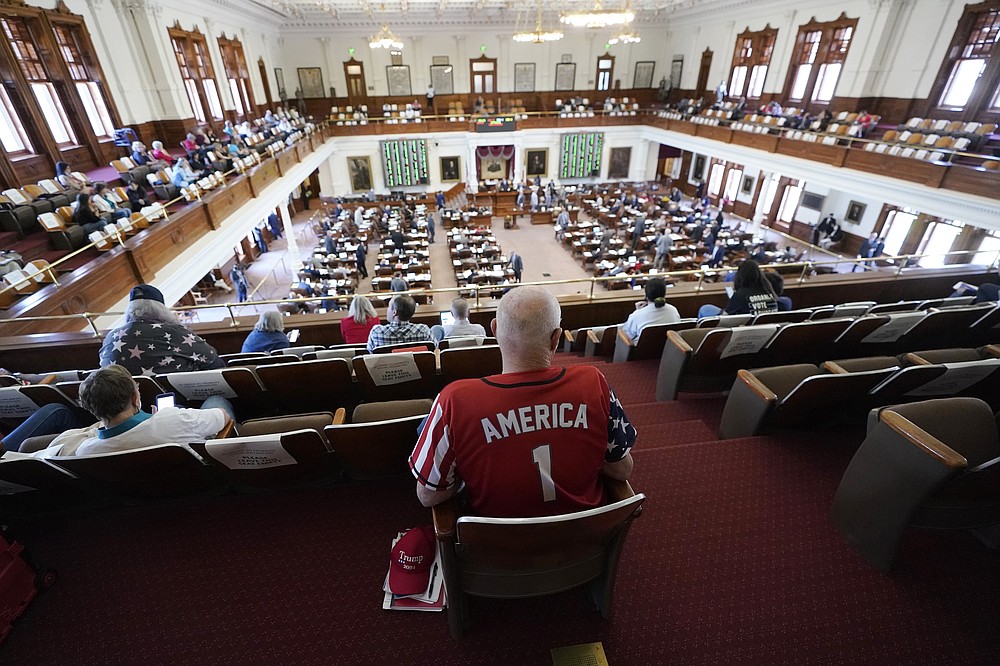 Gerald Welty sits the House Chamber at the Texas Capitol as he waits to hear debate on voter legislation in Austin, Texas, Thursday, May 6, 2021. (AP Photo/Eric Gay) 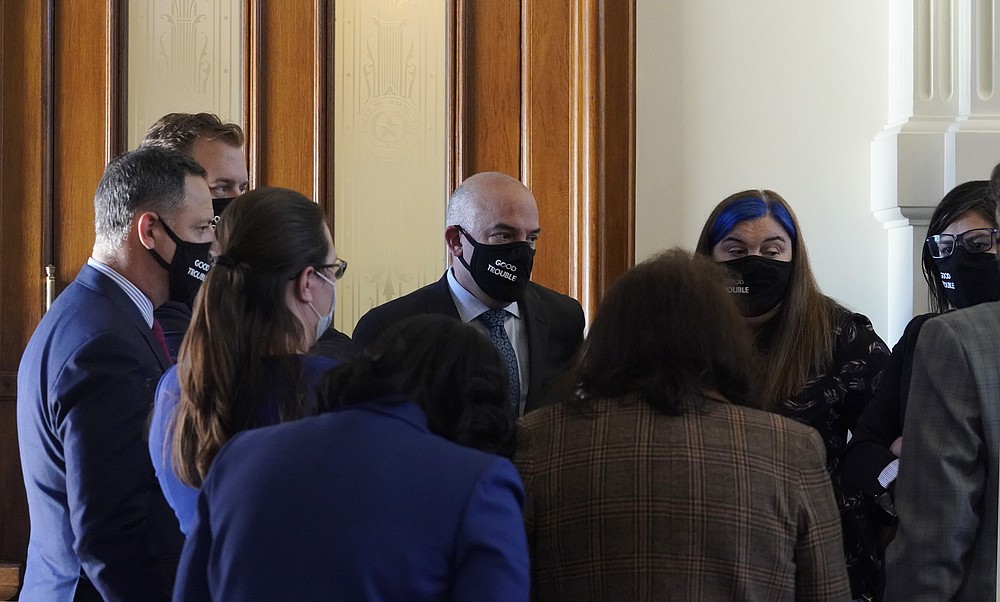 Democratic lawmakers gather in the House Chamber at the Texas Capitol as they wait to hear debate on voter legislation in Austin, Texas, Thursday, May 6, 2021. (AP Photo/Eric Gay) 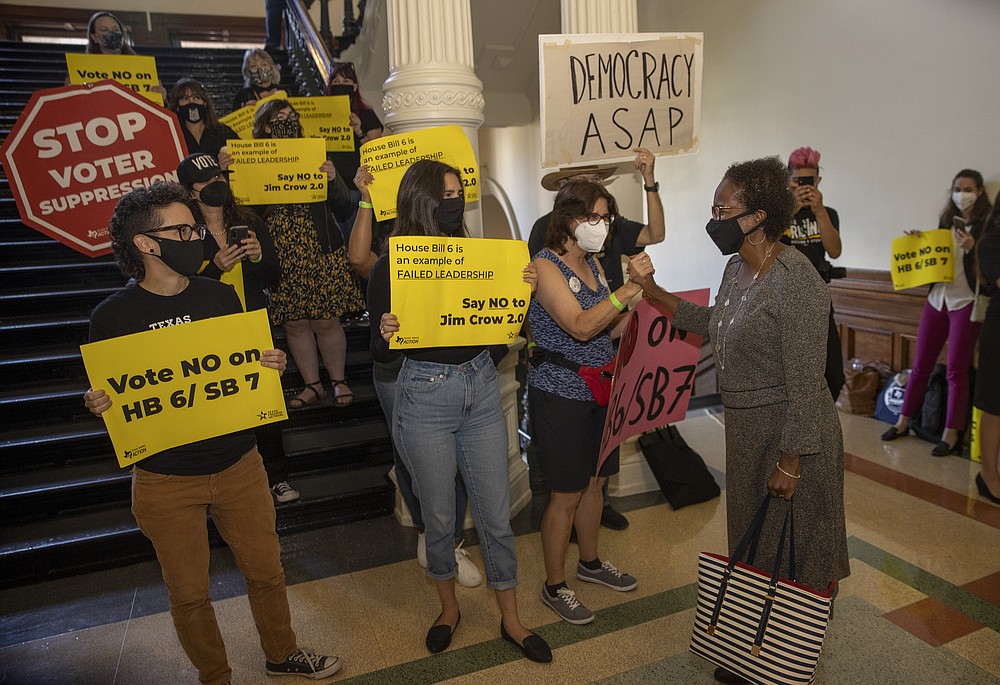 State Rep. Sheryl Cole, D- Austin, clasps hands with Susan Gezana, as Cole entered the House Chamber at the Capitol in Austin on Thursday May 6, 2021, to debate House Bill 6, a bill that would create new election-related crimes, boost penalties for existing crimes and raise the profile of partisan poll watchers. (Jay Janner /Austin American-Statesman via AP) 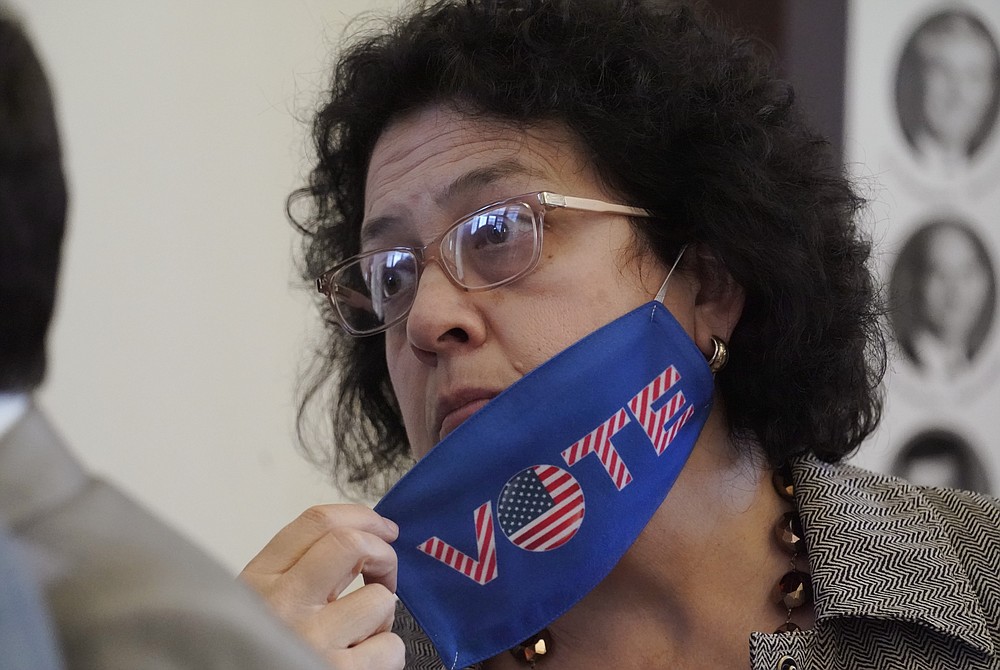 State Rep. Celia Israel, D-Austin, listens to fellow lawmakers in the House Chamber at the Texas Capitol as they wait to hear debate on voter legislation in Austin, Texas, Thursday, May 6, 2021. (AP Photo/Eric Gay) 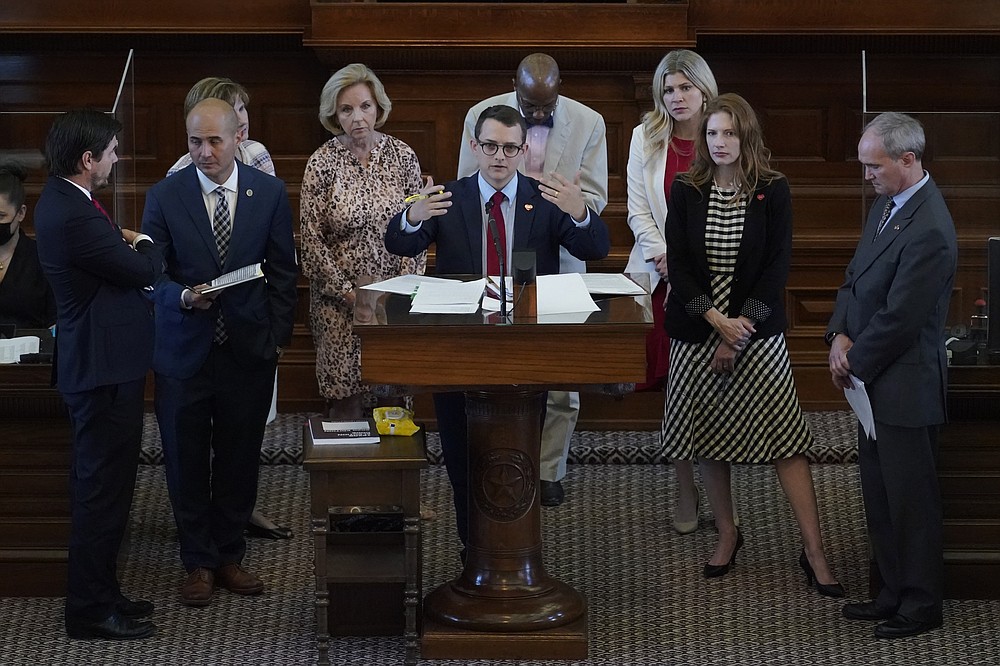 Rep. Briscoe Cain, R-Houston, center, stands with co-sponsors as he answers questions and speaks in favor of HB 6, an election bill, in the House Chamber at the Texas Capitol in Austin, Texas, Thursday, May 6, 2021. (AP Photo/Eric Gay) 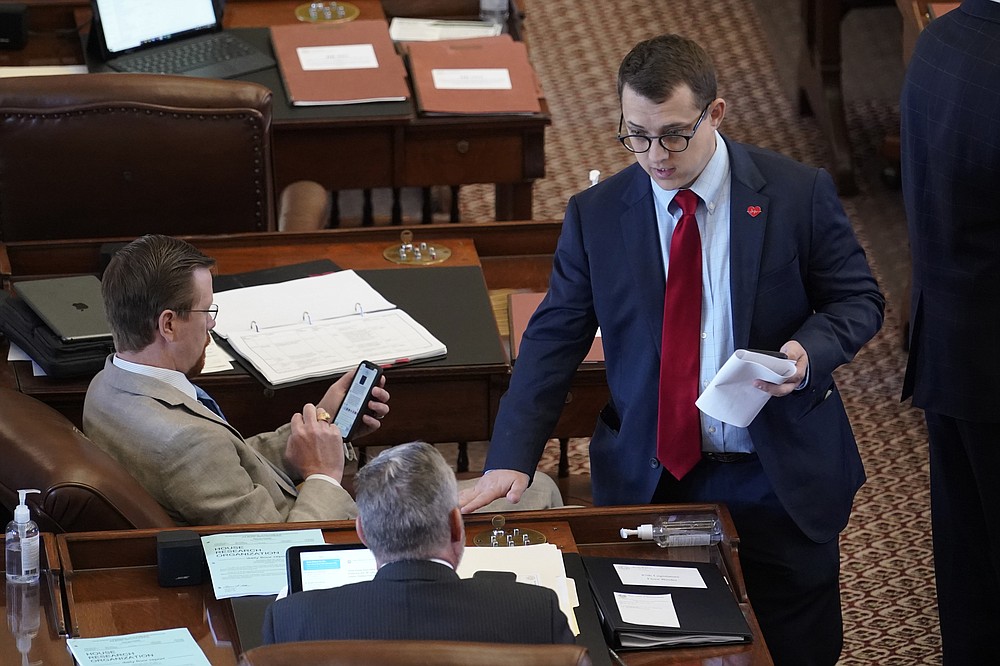 State Rep. Briscoe Cain, R-Houston, right, talks with fellow lawmakers in the House Chamber at the Texas Capitol as they wait to hear debate on voter legislation, Thursday, May 6, 2021, in Austin, Texas. (AP Photo/Eric Gay) 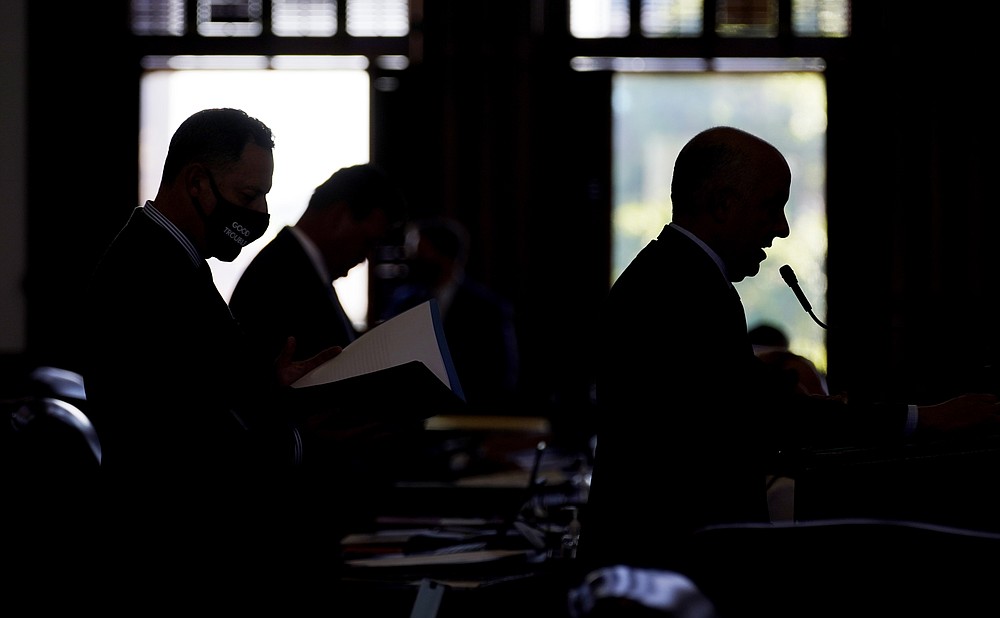