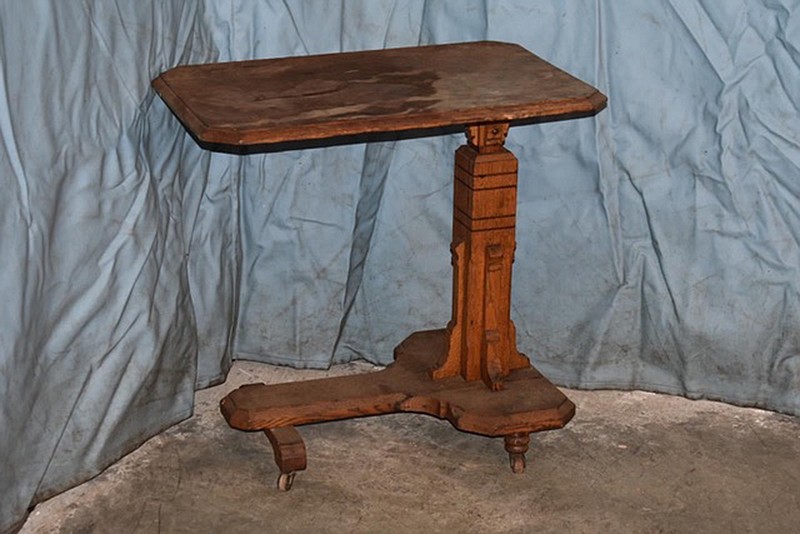 This piece was probably used daily for many years. (Handout/TNS)

DEAR HELAINE AND JOE: I went to an auction not long ago and could not stop myself from buying this piece, even though there was some damage to the finish. It is marked "Hale & Kilburn, Philadelphia" on an oval tag. Any thoughts on my purchase?

DEAR S.C.: Today, when we see a piece of furniture such as this one, we cannot help but think "hospital." Every hospital room across America seems to have a modern version of one of these for serving meals to bed-bound patients.

But when this particular example was new, we think it had a more elegant purpose. Yes, it is still useful for the nonambulatory, but when it was new at the turn of the 20th century it was probably used for serving madame breakfast in bed — or perhaps when the lady of the house wanted to dash off a few notes while still in her boudoir.

Yes, there was a time when these overbed tables tended to bring to mind maids and butlers rather than nurses and doctors. They can be extremely useful and practical, but they seldom fit in modern homes where space can be a premium.

Hale and Kilburn was founded in Philadelphia in 1873 by inventor and industrialist Henry Hale and Cheney Kilburn. They began making parlor and other household furniture including folding beds and water coolers.

By the time the company moved within the city they had started manufacturing seating for railroads, trolleys and subways. They had even developed a so-called "walkover" seat that could be rotated to face the way in which the train, subway or trolley was traveling — we supposed because some people get queasy when they have to ride backward to the direction of motion.

The company was sold in 1911 to J.P. Morgan and again in 1920 to the American Motor Body Co., which made closed car bodies for Ford, Hudson, Chalmers and Maxwell automobiles. Looking at this piece, we see it was made from oak and stylistically it looks very much like other pieces of utilitarian furniture made at the turn of the 20th century, and we do see a bit of very late Victorian Eastlake influence.

As far as the finish goes, we recommend S.C. try cleaning it gently with mild soap and water. Then, she might try rubbing it down with a little bit of lemon oil and see how she likes the results. But please, no sandpaper and no harsh refinishing!

This piece was a workhorse. It was probably used daily for many years, and it has earned its scars as a badge of honor. S.C. must have liked the look before she bought it, and now would be a good time to appreciate it for its years of useful service.