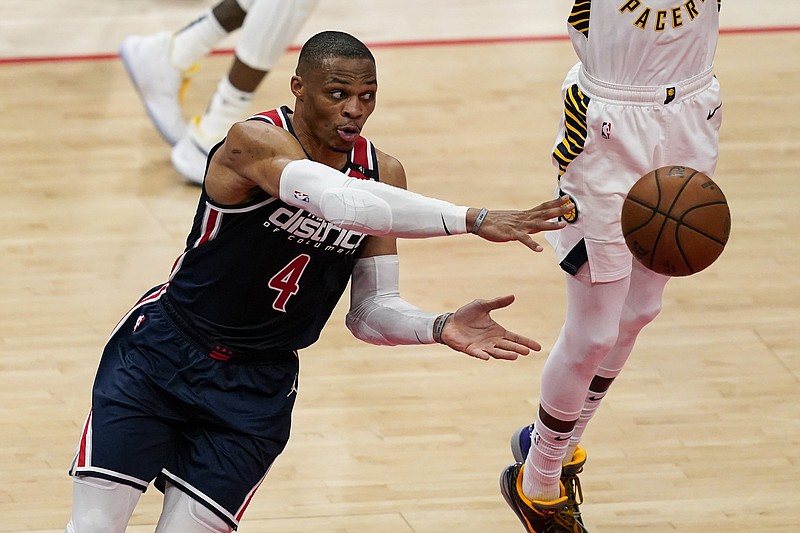 Washington Wizards point guard Russell Westbrook has 180 triple-doubles in his NBA career. He can tie Oscar Robertson for the career record as early as today. Robertson’s mark has stood since 1974. (AP/Alex Brandon)

WASHINGTON -- Russell Westbrook's stat lines have been looking like typos in the box score lately -- the 14-point, 21-rebound, 24-assist game this week, for example, or the 18-18-14 five nights earlier -- and now he's on the verge of something historic.

The Washington Wizards point guard's next triple-double -- which could come as soon as today in a game at the Indiana Pacers that has playoff implications -- will be the 181st of Westbrook's career, tying Oscar Robertson's NBA record that has stood for nearly a half-century.

Westbrook's stellar play of late not only has guaranteed him his fourth season averaging a triple-double -- the current numbers are 21.8 points, an NBA-best 11.4 assists and 11.4 rebounds (sixth in the league) -- but also has been translating into victories.

Washington has won 14 of its past 18 contests, including an eight-game winning streak that was the team's longest run since 2001. That's propelled the Wizards into 10th in the Eastern Conference standings at 31-36, good enough to be in position for a play-in berth, just a half-game behind Indiana for ninth and holders of a 3½-game lead over the 11th-place Chicago Bulls entering Friday.

And while All-Star shooting guard Bradley Beal, who is second in the NBA in scoring average, is playing a key role -- "They complement each other well, and it's getting better," Coach Scott Brooks said -- Westbrook is getting credit for doing more to help the team than all of the numbers next to his name.

"The energy, the intensity, the things the analytics don't understand. The fierce competitiveness. What he instills in our younger players, there's no analytics for that," Brooks said about someone he also coached years ago with the Oklahoma City Thunder.

Beal credited the turnaround from a 17-32 record April 5 to "our approach to the game, night in and night out" and explained: "We follow Russ on that."

Brooks praised Westbrook for playing nightly "like it's Game 7" and called him the second-best point guard in NBA history, behind only Magic Johnson.

"He's doing MVP-type things every game. And he's an MVP winner every night, on the floor and off the floor," Brooks said. "You can critique him all you want. He's as high a level player as this league has ever seen."

Westbrook's 13 points, 17 rebounds and 17 assists Thursday gave him his 34th triple-double of the season. The performance also helped Washington beat Toronto for the first time since 2018.

"He just does so many things in so many different ways, right? I mean, obviously the first thing you always think about is the freight train coming downhill 100 mph in transition. Then he'll post you. He'll kill you on the offensive glass. He'll run pick-and-roll. Now he's making 3-balls," Raptors Coach Nick Nurse said. "I've always been super impressed and loved his competitive spirit and just watching him play."

Westbrook, who defines his job as "making others around me better," objects to the notion that he is merely accumulating statistics.

"I honestly believe there is no player like myself," said Westbrook, who arrived in Washington via an offseason trade that sent John Wall to the Houston Rockets. "And if people want to take it for granted, sorry for them. But I'm pretty sure if everybody could do it, they would do it."

Asked whether he contemplates how surpassing Robertson could affect his legacy, Westbrook responded with a hint of a smile.

"I don't think about it. I actually just go out and have fun and hoop," he said. "And at the end of the day, when my journey is done and I'm done playing basketball, I can look back and think about some of the crazy stat lines -- the good, the bad, the ugly -- and be thankful for it all."

PHILADELPHIA -- Joel Embiid had 37 points and 13 rebounds as Philadelphia inched closer toward securing the top spot in the East with a victory over New Orleans.

Embiid made two free throws with 1:39 left to bring the Sixers within one, then grabbed a defensive rebound on the other end to set up Tobias Harris' three-pointer with 1:10 left that made it 109-107. Philadelphia forced two turnovers to seal the victory.

The Sixers (46-21) won their season-high seventh consecutive game and increased their lead to three games over Brooklyn in the Eastern Conference. Barring a crazy collapse over the final five games, the Sixers will win the conference and home-court advantage through the conference playoffs. The Sixers are 26-7 at home this season, and they won another tight one against a Pelicans team playing without Zion Williamson (finger).

Lonzo Ball and Eric Bledsoe both scored 18 points for the Pelicans.

DALLAS -- Luka Doncic scored 24 points in 23 minutes as Dallas kept the prime spot in a tight race to avoid the Western Conference play-in tournament with a victory over Cleveland.

Tim Hardaway Jr. added 20 points for the Mavericks, who didn't trail after going ahead 4-2 while the undermanned Cavaliers lost their ninth consecutive game, one short of their longest skid of the season. The teams play again Sunday in Cleveland.

The already injury-riddled Cavaliers had to play without Kevin Love, who was sidelined after banging knees with Portland's Enes Kanter two nights earlier in a 141-105 loss to the Trail Blazers. Collin Sexton scored 27 points for the Cavaliers.

Dallas guaranteed it would remain in fifth place in the West, a game ahead of either the Los Angeles Lakers or Portland with five games remaining. The odd team out among the three will be forced into the play-in scenario as the No. 7 seed.

Trey Burke hit a half-court shot at the buzzer in the first quarter for a 33-19 Dallas lead, and Doncic converted a three-point play in the final seconds before the half for a 62-37 margin at the break.

With their playoff hopes fading and fans at the United Center for the first time this season, the Bulls had their way with the Celtics. They led by 21 in the third quarter and put this one away after Boston got within eight in the fourth, scoring 12 in a row.

Chicago pulled within three games of Washington and 3 1/2 of Indiana for the final spots in the Eastern Conference play-in tournament with five to play.

LaVine started the decisive run with a dunk and finished it with a fadeaway three-pointer to make it 112-92 with about three minutes remaining. He also had a steal in that stretch.

White hit seven three-pointers -- one shy of his career high -- and the Bulls made 18 of 40 from beyond the arc. Nikola Vucevic added 18 points, 10 assists and 14 rebounds as Chicago won for the second time in as many nights after losing four in a row.

Walker scored 33 for Boston, which came in tied for sixth in the East with Miami. The four-time All-Star made six three-pointers. Evan Fournier scored 17, but the Celtics came up short after winning three of four.

MILWAUKEE -- Brook Lopez had 24 points and Khris Middleton scored 21 of his 23 in the second half to help Milwaukee beat Houston for its fifth consecutive victory.

The Bucks (43-24) tied Brooklyn for second place in the Eastern Conference standings. The Bucks also have the tiebreaker advantage over Brooklyn because they won two of their their three regular-season meetings.

KJ Martin had 26 points and 7 assists -- both career highs -- as well as 7 rebounds for the Rockets before fouling out. Kelly Olynyk added 23 points, 12 rebounds and 7 assists.

Milwaukee earned a measure of revenge after falling 143-136 on April 29 at Houston. Antetokounmpo left that game in the opening minute with a sprained right ankle. The Bucks haven't lost and the Rockets haven't won since that game.

MIAMI -- Tyler Herro returned after a six-game absence and scored 27 points, Jimmy Butler had 25 and Miami moved back into the No. 6 spot in the Eastern Conference by beating Minnesota.

The win, combined with a loss at Chicago by Boston (35-32), allowed the Heat to pass the Celtics in the standings. Miami opens a two-game series in Boston on Sunday, the teams battling to avoid having to be part of the play-in tournament that awaits the teams finishing between No. 7 and No. 10 in each conference.

Karl-Anthony Towns scored 14 of his 27 points in the fourth quarter for Minnesota, which had won five consecutive meetings against Miami. Anthony Edwards scored 25 points and D'Angelo Russell added 17 before getting ejected in the third quarter.

Butler also had 8 rebounds, 6 assists and 5 steals for Miami. Bam Adebayo scored 15 for the Heat.

Charlotte can clinch a spot in the play-in tournament with a win Sunday against New Orleans.

P.J. Washington had another strong shooting night and finished with 23 points and 9 rebounds, while Bismack Biyombo had 11 points and 11 rebounds as Charlotte (33-34) bounced back from a 21-point drubbing by Chicago on Thursday night.

Dwayne Bacon tied a career-high with 26 points and Mo Bamba had a career-best 18 rebounds to lead the Magic (21-46). Cole Anthony had 22 points. 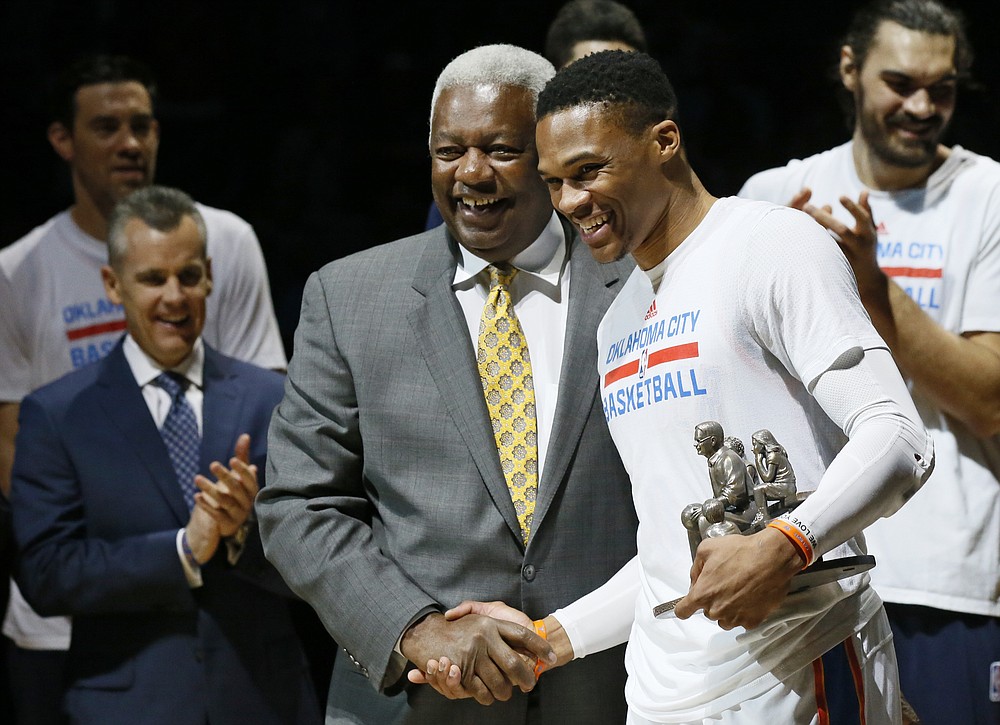 FILE - Then-Oklahoma City Thunder guard Russell Westbrook, right, is congratulated by Oscar Robertson on his single season triple-double record before an NBA basketball game between the Denver Nuggets and the Oklahoma City Thunder in Oklahoma City, Okla., in this Wednesday, April 12, 2017, file photo. Westbrook’s stat lines have been looking like typos in the box score lately, and now he’s on the verge of something historic. The Washington Wizards point guard’s next triple-double – which could come as soon as Saturday, May 8, 2021, will be the 181st of his career, tying Oscar Robertson’s NBA record. (AP Photo/Sue Ogrocki, File) 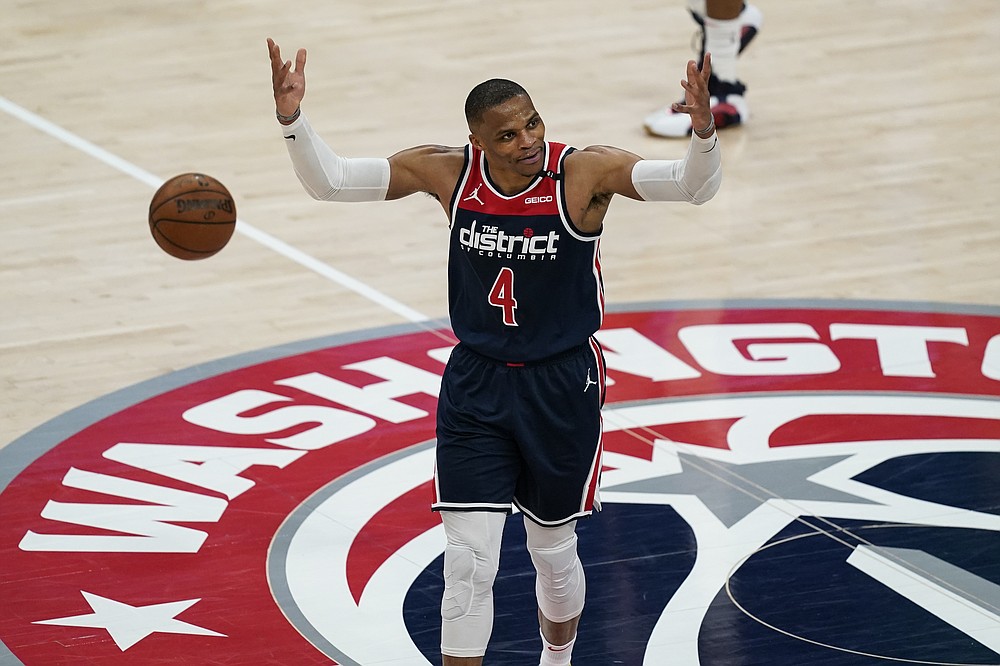 Washington Wizards guard Russell Westbrook reacts with the fans during a timeout during the second half of a basketball game against the Indiana Pacers, Monday, May 3, 2021, in Washington. (AP Photo/Alex Brandon) 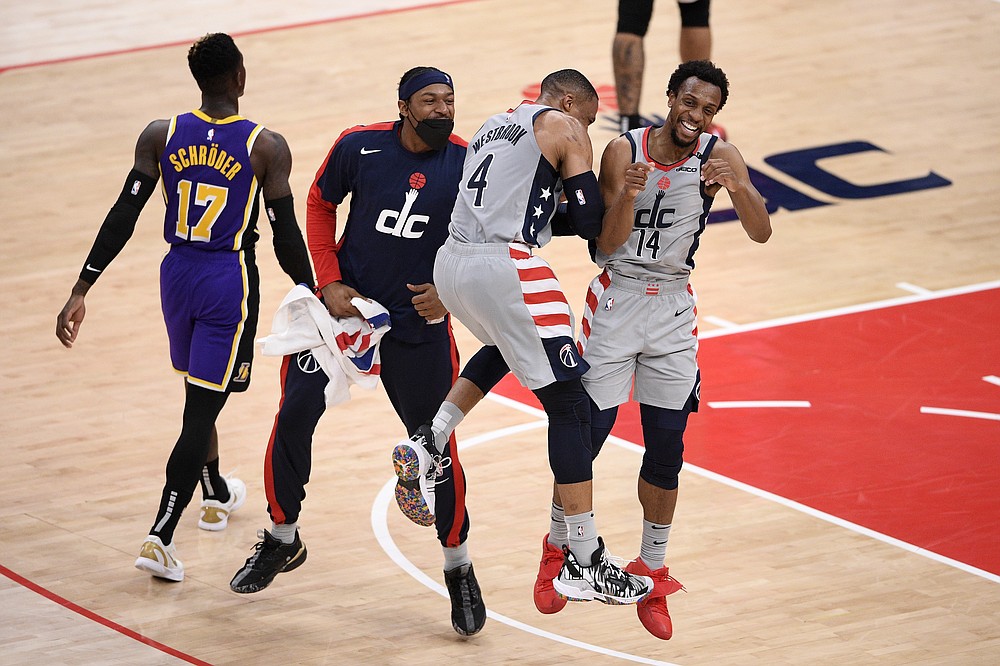