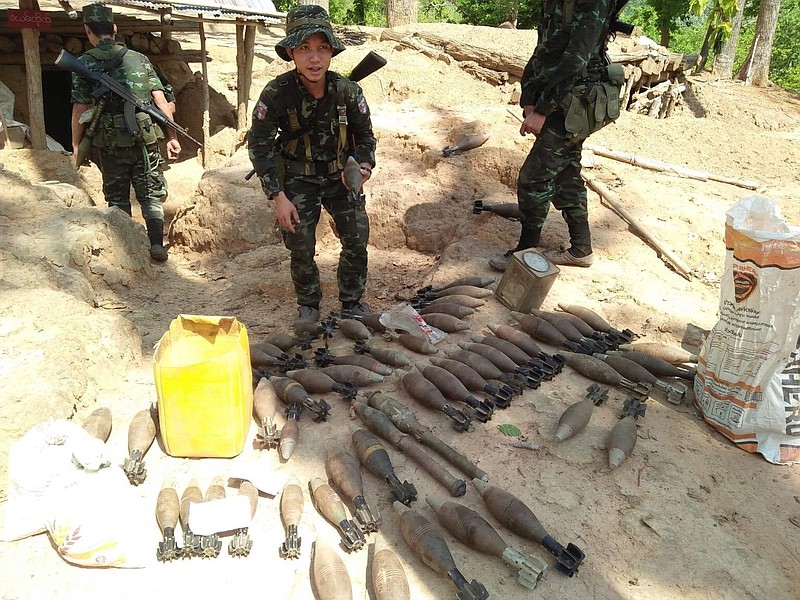 BANGKOK — Guerrilla soldiers from Burma’s Karen ethnic minority burned down a government military outpost Friday after capturing it without a fight when its garrison fled, a senior Karen officer said.

The position is about 9 miles from a larger camp that the Karen National Liberation Army stormed and burned 10 days earlier. The group is the armed wing of the Karen National Union, the main political organization representing the Karen minority, whose homeland is in eastern Burma.

The Karen and the Kachin in northern Burma are the two major ethnic armed organizations that have allied themselves with the movement against the junta that took power after the army ousted the elected government of Aung San Suu Kyi in February.

The role of the ethnic militant groups has become more important as the number of people joining street protests in Burma’s cities and towns has declined, in large part because of deadly violence increasingly used by security forces to suppress them. Hundreds of demonstrators and bystanders have died.

There is now daily fighting between the government and the military forces of the Karen and the Kachin.

BANGKOK — Police in Thailand said Friday that they have charged a U.S. citizen from Colorado in the slaying of his pregnant Thai wife.

Jason Matthew Balzer, 32, was interrogated Friday in the northern city of Nan, where he had lived with Pitchaporn Kidchob, said police Lt. Col. Somkiat Ruam-ngern. The murder charge carries a maximum penalty of death.

Balzer was arrested Thursday in the northern city of Chiang Mai and confessed to killing his 32-year-old wife, said police Maj. Gen. Weerachon Boontawee. It was unclear if Balzer had a lawyer. His last known residence in the U.S. was in Longmont, Colo.

According to Weerachon, Balzer said Pitchaporn had “given him hope,” so he married her and bought her a house in Nan, her home province. Balzer said he grew enraged when she tried to chase him out, so he stabbed her with a knife, the police officer said.

He said Balzer put her body in a rubbish bin that he sealed and buried in the woods about 3 miles from their home.

Balzer, a computer programmer, met Pitchaporn in Thailand in 2017 and they were married in the U.S., after which Balzer quit his job, sold all his property and moved to Nan, the newspaper Thai Rath reported, citing police commander Prachuab Wongsuk.

Balzer said he did not know his wife was three months pregnant, Prachuab said.

TAIPEI, Taiwan — Some households in Taiwan have been without running water for two days, one week after a monthslong drought dried up the island’s reservoirs and Sun Moon Lake, a popular tourist spot.

Authorities are drilling extra wells and using military planes to dump cloud-seeding chemicals in hopes of triggering rain. The government has also allocated money to extract drinkable water from the sea.

Farmers who need to flood paddies to raise rice, lotus root and other thirsty crops have been hit hard.

“The lotus flowers and seeds I planted don’t produce well,” said Chen Chiu-lang, a farmer in the southern city of Tainan, standing in a dry paddy field.

Rainfall in the seven months through February was less than half the historic average after no typhoons hit Taiwan in 2020 for the first time in 56 years, according to the government.

Households in areas under top-level restrictions include Taiwan’s second-biggest city, Taichung, with 2.8 million people, and Miaoli and Changhua counties.

The Palestinian Red Crescent emergency service said 53 people were wounded in clashes with police there and elsewhere in Jerusalem, including 23 who were hospitalized. It says most were wounded in the face and eyes by rubber-coated bullets and shrapnel from stun grenades.

The clashes were the latest in a deadly day in which Israeli forces shot and killed two Palestinians after three men opened fire on an Israeli base in the occupied West Bank.

The clashes broke out when Israeli police deployed heavily as Muslims were performing evening prayers at Al-Aqsa during the holy month of Ramadan. Video footage shows worshippers throwing chairs, shoes and rocks toward the police and officers responding by opening fire. Israeli police also closed gates leading to Al-Aqsa in the walled Old City.

Dozens of Palestinians in an east Jerusalem neighborhood are at risk of being evicted after a long legal battle with Israeli settlers, and Palestinian protesters have clashed with Israeli police nightly since the start of Ramadan. 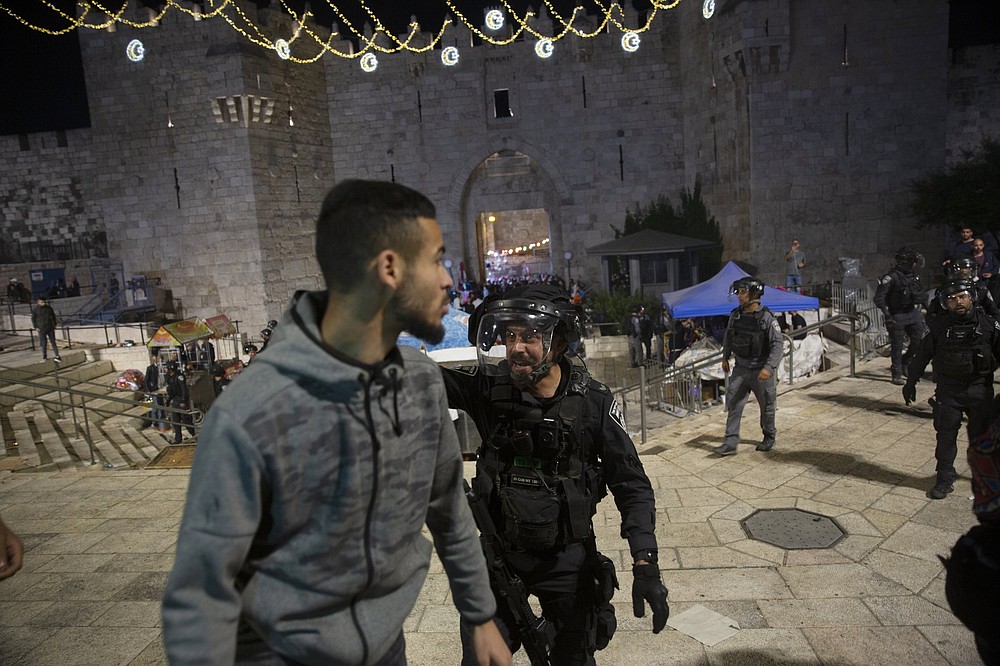 An Israeli policeman shouts Friday at a Palestinian man to leave the Damascus Gate to the Old City of Jerusalem after clashes at the Al-Aqsa Mosque compound. (AP/Maya Alleruzzo) 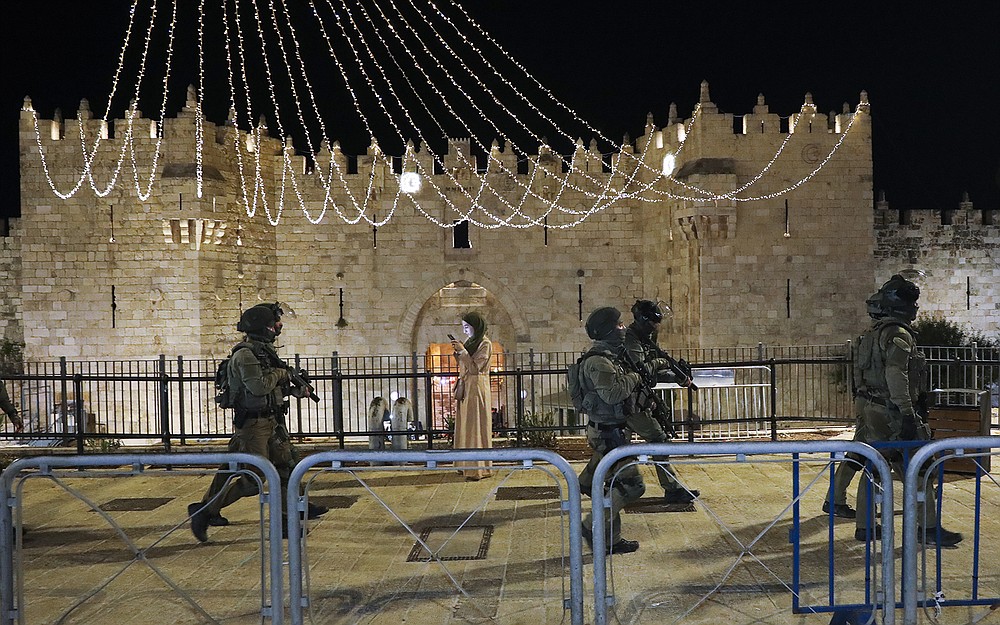 Israeli border police patrol Friday during clashes with Palestinians next to the historic Damascus Gate in Jerusalem’s Old City. Palestinians protested Israel’s threatened eviction of Palestinians who have been in a long legal fi ght with Israeli settlers trying to acquire property in the city’s Sheikh Jarrah neighborhood. More photos at arkansasonline.com/58oldcity/. (AP/Mahmoud Illean)
ADVERTISEMENT