Lakers hope to avoid play-in round 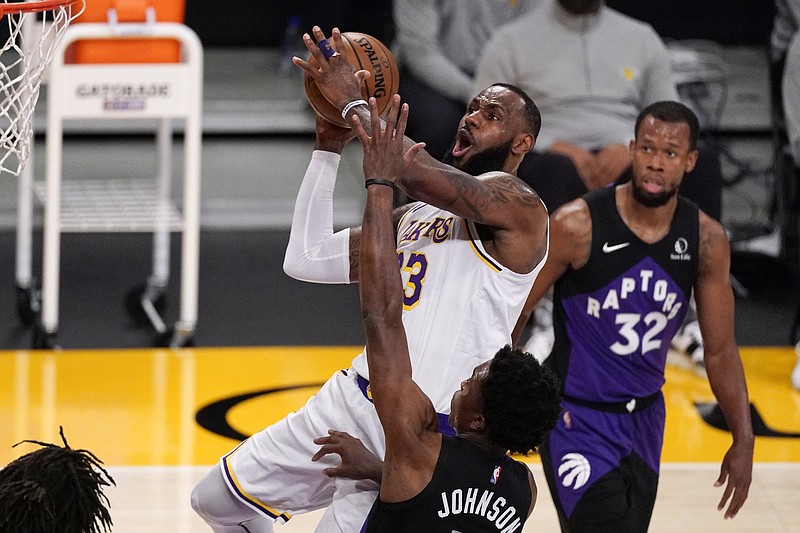 The Los Angeles Lakers won't have home-court advantage in the first round of the Western Conference playoffs. They need help if they're going to escape the play-in tournament. Worse yet, their invitation to the postseason isn't even guaranteed.

It's very simple for the Lakers: They win most of their games when LeBron James plays and lose most of their games when he doesn't. With him sidelined for 23 of the Lakers' last 25 games, they've fallen to No. 7 in the West -- as low as they have been since late December. The most likely fate for them is playing a game (or two) in the new play-in round that awaits the teams finishing between seventh and 10th in each conference.

"We can't worry about that," Lakers Coach Frank Vogel said Friday night after his team lost in Portland to fall to the seventh spot.

James indicated several days ago that he's not exactly a proponent of the play-in games, saying the person at NBA headquarters who came up with the idea should be fired. But if the Lakers don't win most of their remaining five games, the play-in round awaits.

"Wherever we land, we're confident," Vogel said, "Obviously, we want to finish in the top six. We still have five games to make up some ground if that's possible. And we'll continue to try to win as many of those games as we can."

Dallas entered Saturday at No. 5 in the West at 39-28, Portland was No. 6 at 38-29 and the Lakers No. 7 at 37-30. The Lakers would lose tiebreakers against either the Blazers or Mavericks, lowering their odds of escaping the No. 7 spot.

That said, James -- who has been dealing with a high ankle sprain -- may return in the next few days, presumably to get into playoff shape and rebuild some chemistry. That means the champs have at least some reason for hope.

"When we're 100% healthy, we're one of -- no, we are the top team in the league," fellow Lakers All-Star forward Anthony Davis said.

FanDuel Sportsbook still listed the Lakers on Saturday with the second-shortest odds to win the NBA title, behind only Brooklyn in that category. The Lakers were heavy favorites to win the title entering the season.

"Obviously, we don't want to go that route," Davis said of the play-in. "But if it happens, it happens."

It's not just James who has been sidelined. The Lakers are also missing, among others, point guard Dennis Schroder, who will likely not be able to play for several more days while going through the NBA's health and safety protocols in place this season to deal with coronavirus-related matters.

The whole year has been an injury roller coaster for the champs. James and Davis -- who missed 35 games, most of those with a right calf strain -- have appeared in only 25 games together all season; the Lakers are 17-8 in those games. The last time they were together in a game the Lakers won was Feb. 12.

"We're in an adjustment phase, like we've been all year," Vogel said.

The Lakers are 28-15 when James plays this season, 9-15 when he doesn't. They were No. 2 in the West to begin March 20, the day James suffered the ankle sprain. Starting with that game against Atlanta, they've gone 9-17 and fallen steadily down the West standings.

If the Lakers finish seventh, they'll have two chances, both at home, to win one game and make the West playoffs. But Vogel knows in a one-game scenario, anything can happen.

"There's just too many things that can happen in a one-game series -- foul trouble, roll of an ankle, anything like that could pop up," Vogel said. "So, we definitely want to finish in the top six. It's a high priority for us. But at the same time, if we end up in the play-in tournament, I'm confident in our group." 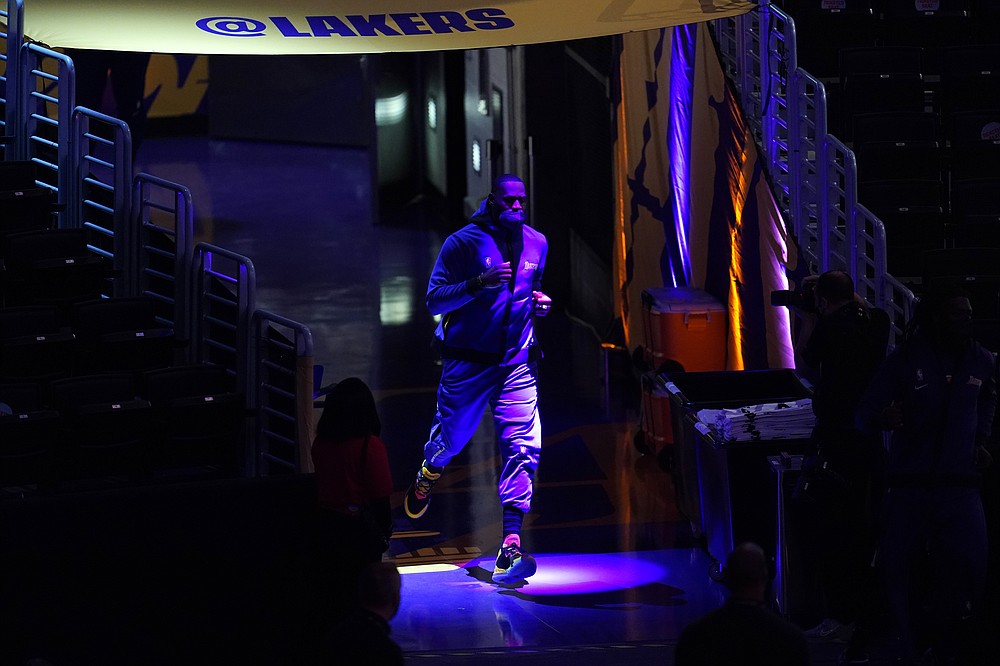 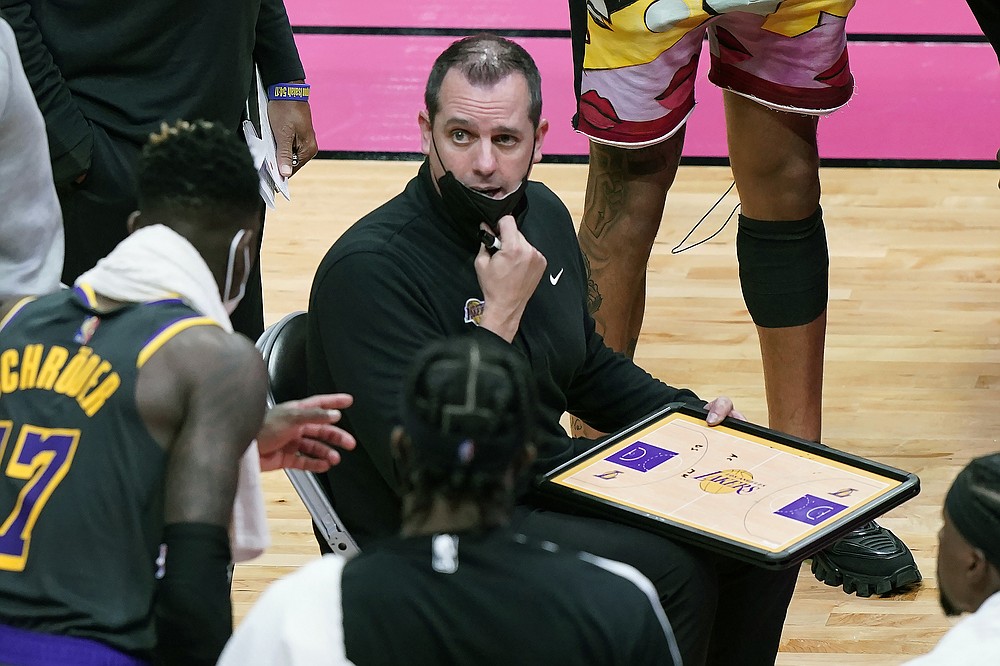 Los Angeles Lakers head coach Frank Vogel talks to guard Dennis Schroder (17) during a time out in the second half of an NBA basketball game against the Miami Heat, Thursday, April 8, 2021, in Miami. (AP Photo/Marta Lavandier) 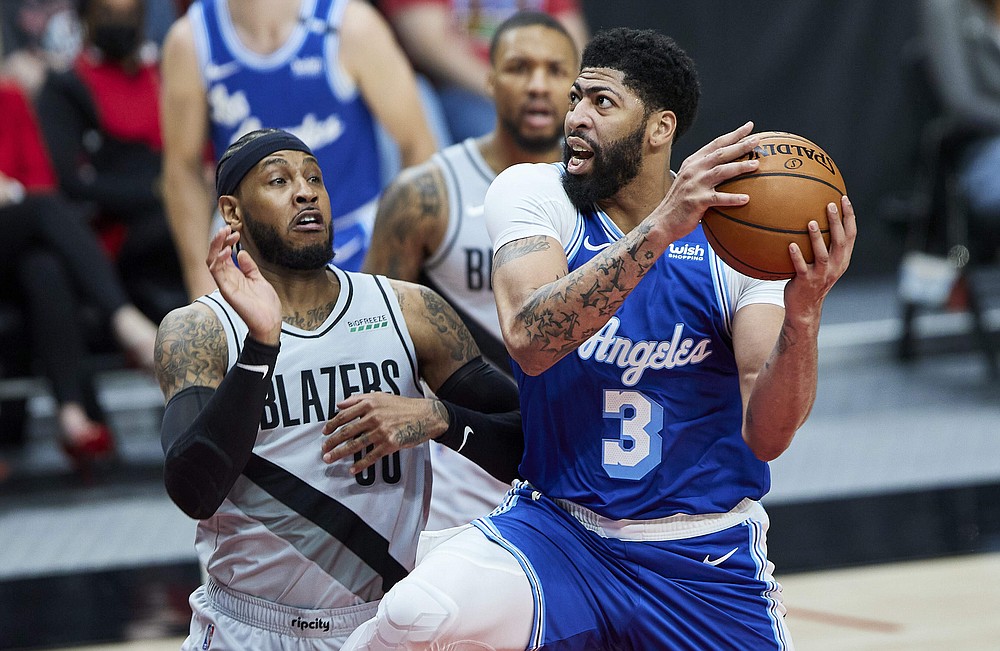