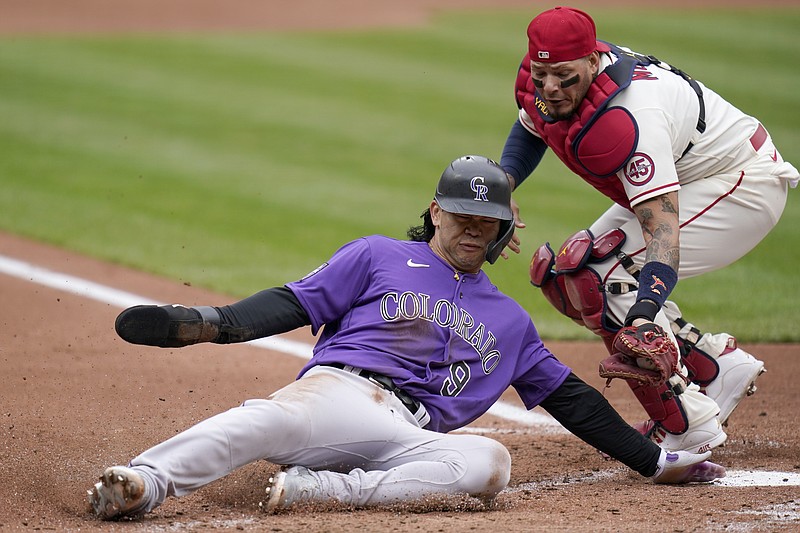 Colorado Rockies' Connor Joe (9) slides after being tagged out at home by St. Louis Cardinals catcher Yadier Molina during the second inning of a baseball game Saturday, May 8, 2021, in St. Louis. (AP Photo/Jeff Roberson)

ST. LOUIS -- Yadier Molina drove in three runs in his return from the injured list, Paul Goldschmidt homered and the St. Louis Cardinals beat the Colorado Rockies 9-8 on Saturday.

Goldschmidt also had three RBI and Nolan Arenado hit another double against his former team. The Cardinals have won eight in a row and 14 of their last 15 games against Colorado at Busch Stadium.

"It was awesome to have Yadi back today," teammate Paul DeJong said. "I think it just shows top to bottom our depth and the way we can score runs. Big homer by Goldy, but we also did it a few other ways."

Molina hadn't played since April 26 because of a strained tendon in his right foot. The All-Star catcher was leading the Cardinals in batting, home runs and RBI when he was hurt.

Carlos Martinez (3-4) wound up winning his third consecutive start. He allowed 5 runs on 6 hits and 5 walks in 5 innings.

After the game, Martinez revealed he had tweaked his right ankle celebrating fellow pitcher Jack Flaherty's first career home run the night before.

"I didn't want to get out of this game," Martinez said. "I knew I got hurt, but I felt comfortable in my mind I could be in the game. I was competing all game."

Alex Reyes struck out the side in a scoreless ninth for his 10th save after narrowly escaping an eighth-inning jam.

Raimel Tapia hit an RBI double off Giovanny Gallegos in the eighth to cut the Rockies' deficit to 9-6. Reyes entered and walked Trevor Story before giving up a two-run single to Charlie Blackmon, marking the first earned run allowed by the reliever in 15 2/3 innings this season. Blackmon advanced to second on an errant pickoff throw from Reyes before Garrett Hampson lined out to end the inning.

"It was good to see some offense on the road," Blackmon said. "I felt like we had some really competitive at-bats all the way down the order. It could have easily been a good win."

BREWERS 6, MARLINS 2 Adrian Houser struck out 10 in six innings and homered off Daniel Castano for the second time this season, and Milwaukee snapped a six-game losing streak by beating Miami. Avisail Garcia added his fourth home run for the Brewers, who improved to 1-5 on their seven-game trip. The losing streak was their longest since July 2018.

TIGERS 7, TWINS 3 Miguel Cabrera hit a tiebreaking single to key a five-run burst in the seventh inning that sent Detroit over Minnesota. Cabrera had two hits, raising his batting average to .149. The longtime star now has 2,876 hits, tied with Mel Ott for 44th on the all-time list.

YANKEES 4, NATIONALS 3 (11) Gleyber Torres' tying single in the ninth inning and a winning infield single in the 11th helped New York overcome Max Scherzer's commanding 14-strikeout performance to beat Washington. Scherzer allowed two hits in 7 1/3 innings, but the Yankees rallied three times. Kyle Higashioka's home run tied the score at 1-1 in the third, Torres made it 2-2 against Brad Hand in the ninth, and Mike Ford's single evened it 3-3 against Hand in the 10th.

INDIANS 9, REDS 2 Cesar Hernandez hit a three-run triple and Aaron Civale pitched seven strong innings to stay unbeaten as Cleveland struck back after being no-hit for the second time in 24 days by belting Cincinnati. The Indians became the 18th team to be no-hit twice in the same season on Friday, when Wade Miley shut them down for the fourth no-no in 2021. 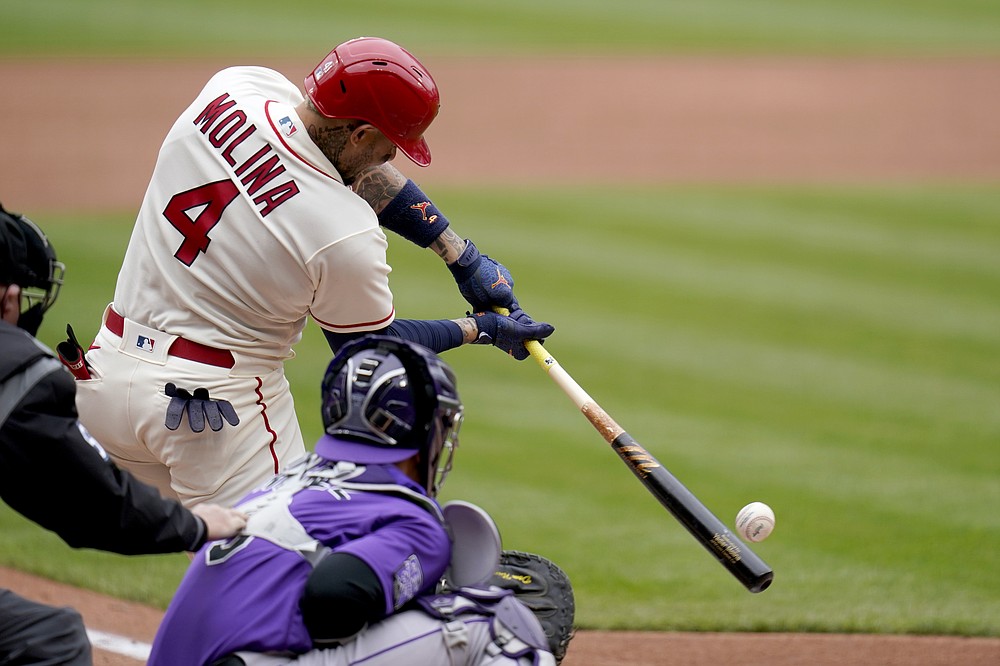 St. Louis Cardinals' Yadier Molina (4) hits a two-run single during the third inning of a baseball game against the Colorado Rockies Saturday, May 8, 2021, in St. Louis. (AP Photo/Jeff Roberson) 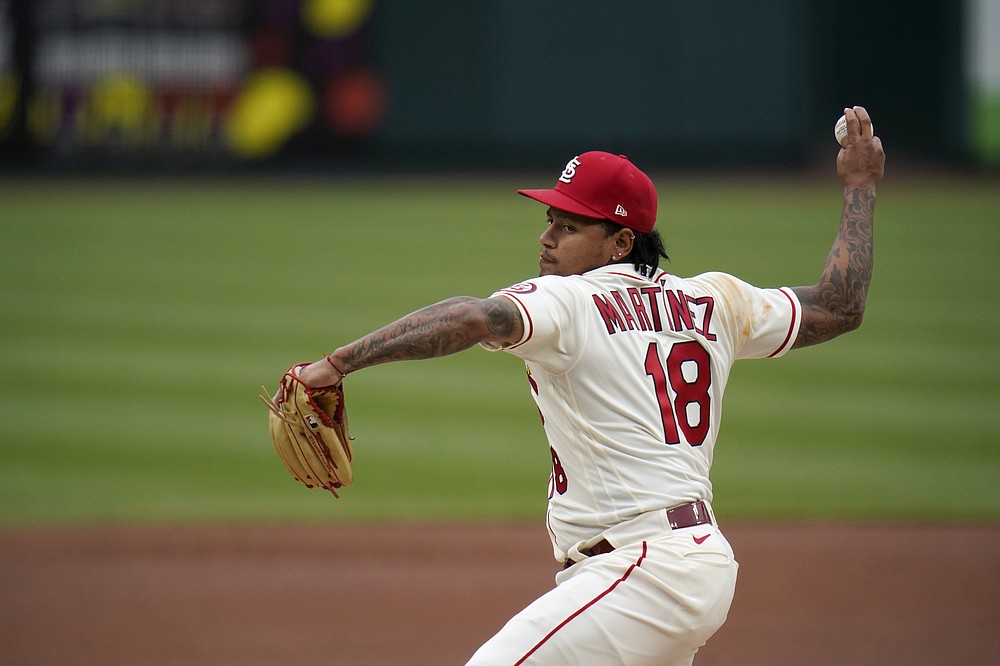 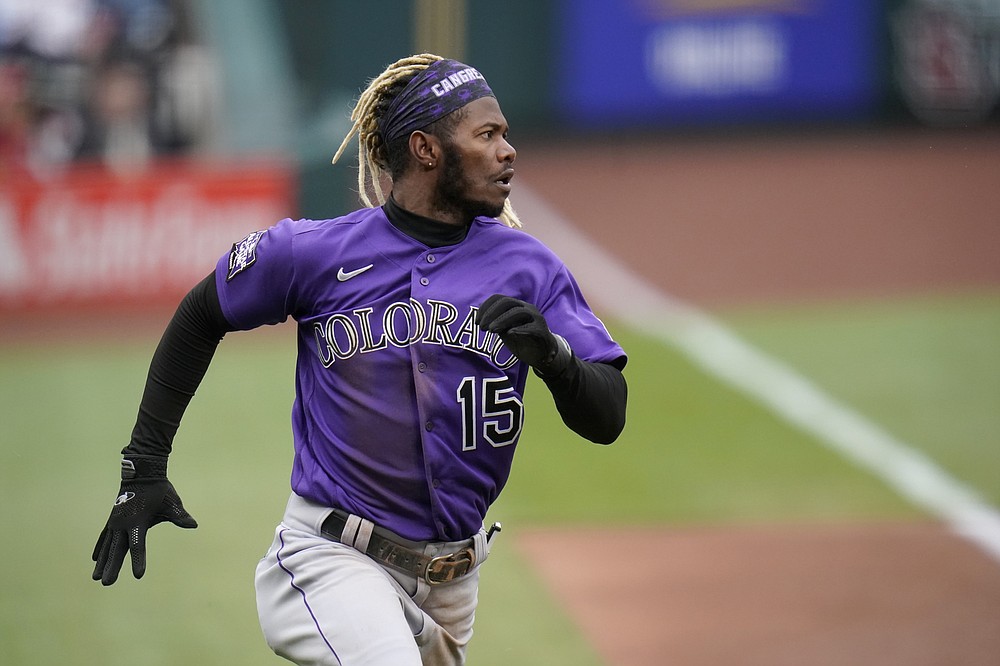 Colorado Rockies' Raimel Tapia runs in to score during the first inning of a baseball game against the St. Louis Cardinals Saturday, May 8, 2021, in St. Louis. (AP Photo/Jeff Roberson) 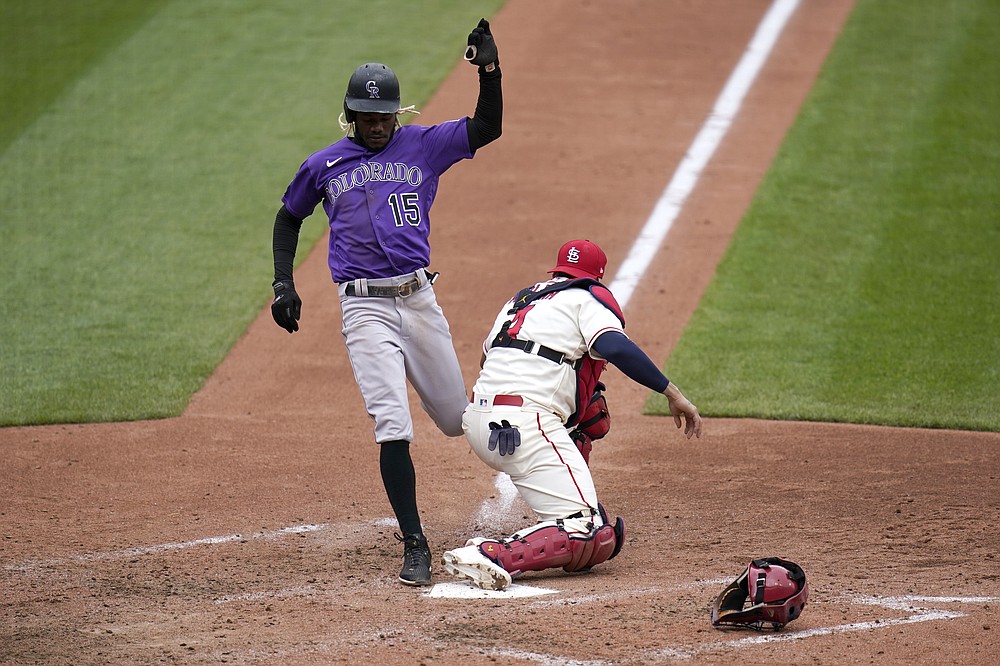 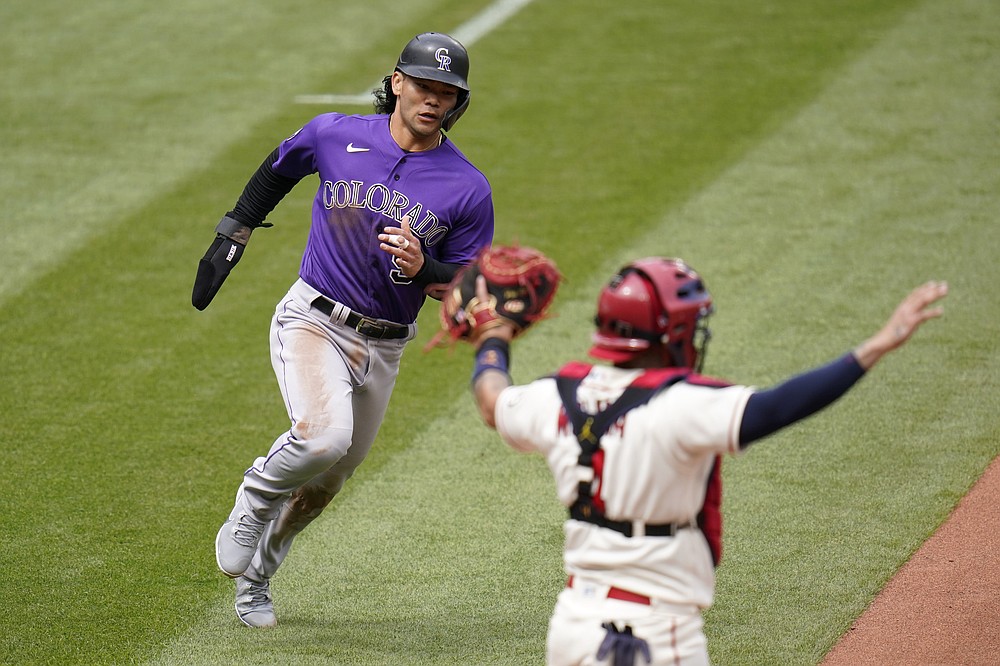 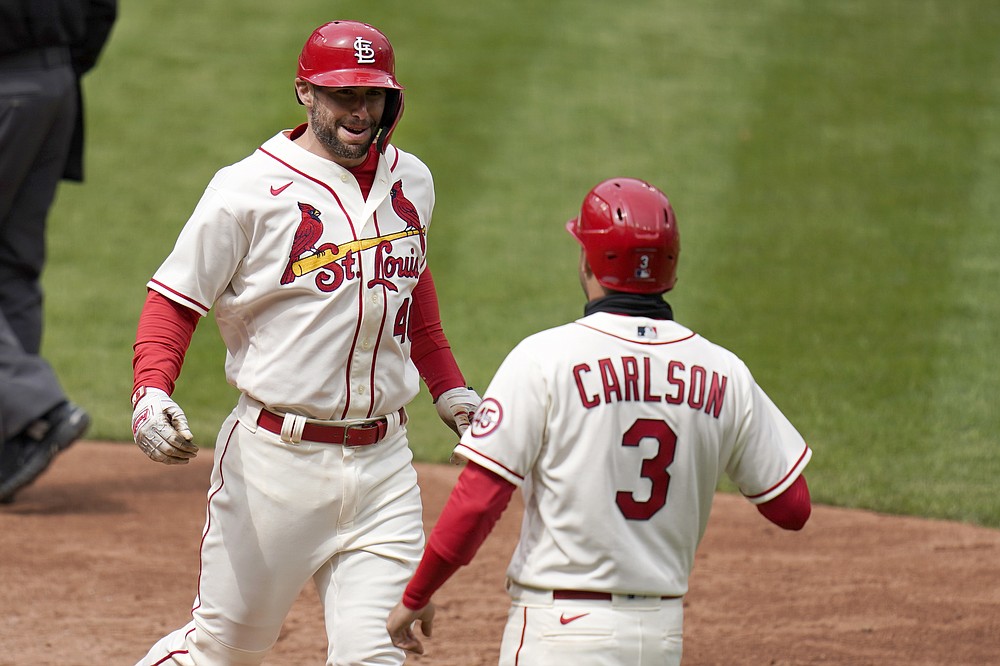 St. Louis Cardinals' Paul Goldschmidt, left, is congratulated by teammate Dylan Carlson (3) after hitting a two-run home run during the fifth inning of a baseball game against the Colorado Rockies Saturday, May 8, 2021, in St. Louis. (AP Photo/Jeff Roberson) 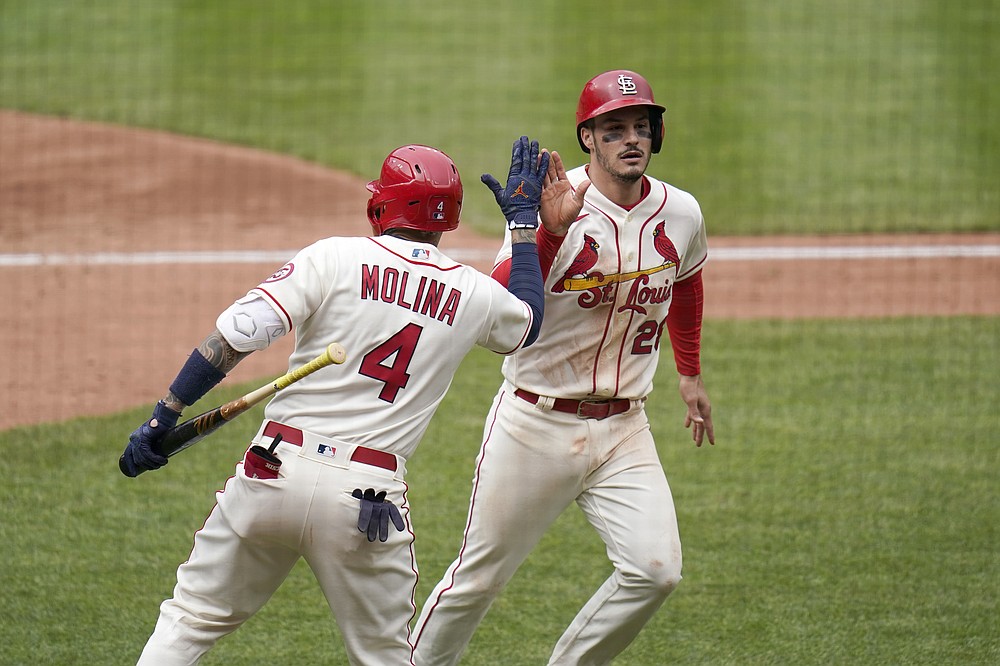 St. Louis Cardinals' Nolan Arenado, right, is congratulated by teammate Yadier Molina (4) after scoring during the fifth inning of a baseball game against the Colorado Rockies Saturday, May 8, 2021, in St. Louis. (AP Photo/Jeff Roberson)
ADVERTISEMENT