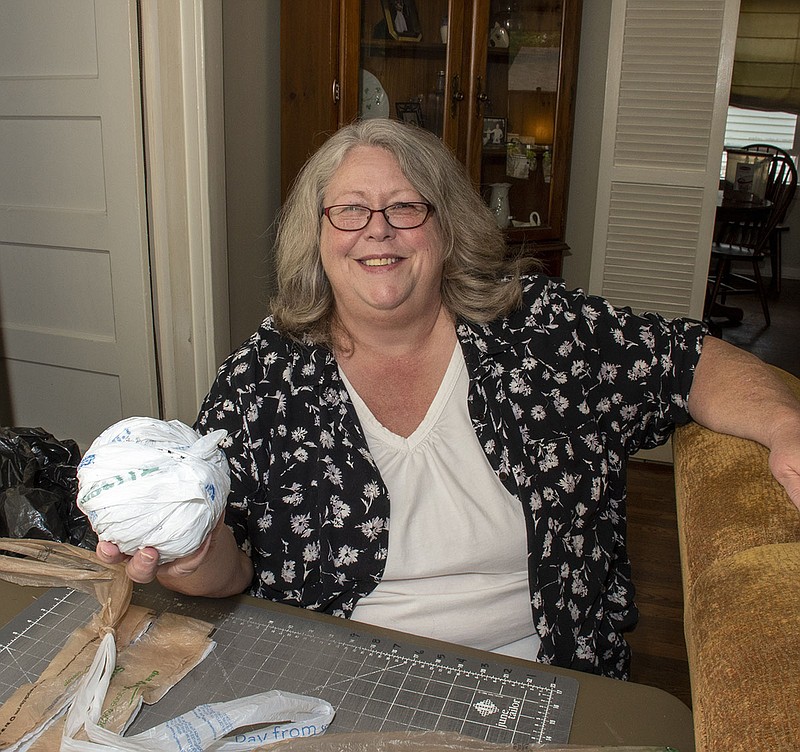 Pat Roby at her home on 04/27/2021 holds a ball of plarn (plastic yarn) she makes from plastic grocery bags then crochets into mats for the homeless. (Arkansas Democrat-Gazette/Cary Jenkins)

For Pat Roby, they are a way to help the homeless.

Since August, the 61-year-old Roby has turned plastic bags from places like Kroger and Walmart into comfortable, easily portable sleeping mats for the unsheltered.

For up to six hours a day, she takes hundreds of bags and transforms them into a soft pallet, about the size of a sleeping bag, that provides a person a dry space to sleep. When not being used, the featherweight mats roll up and can be toted by a handy-dandy shoulder strap.

She has donated about 60 of them to The Van, a division of the Little Rock-based nonprofit The One Inc., which provides services and supplies to the homeless. And she is not slowing down.

Roby is in the tidy, uncluttered living room of her home in Little Rock's Capitol View neighborhood with Dakota, her sweet and friendly Lab mix. Junebug, her black cat, is on the porch.

Roby's foray into making sleeping mats from plastic bags began last year around the start of the covid-19 pandemic when her job as an assistant director in physician billing at the University of Arkansas for Medical Sciences was cut.

She set about looking for a new job and, with more free time on her hands, began cleaning out her closets.

"I had all these grocery bags and I'd heard you could make [sleeping mats]," she says. "So I wanted to figure that out."

Like many a budding hobbyist, she turned to YouTube and found how-to videos galore. She landed on a channel she liked and began crafting the plastic-bag pads. She also contacted The Van and asked if they could use them.

"They know where the need is and where they should go," Roby says.

And she was still looking for a job. At least at first.

She was attending online services of her home church, All Saints' Episcopal in Paragould, and a morning prayer kept coming back to her.

"In the general thanksgiving part of it, we say, 'We praise you not only with our lips but our lives by giving up ourselves to your service and walking before you in holiness and righteousness all our days.'"

The prayer had an impact. Roby had saved for retirement, and though losing her job was a blow, she realized that since she wasn't working full time she could do something to help others.

"I had a nice job, I was able to be comfortable and put money back," she says. "I don't need anything. I thought that maybe it's time to make someone else a little more comfortable."

She retired and now devotes her days to making sleeping pads and taking care of Dakota and Junebug.

"The first one I made was not very pretty," she says with a chuckle. "It was functional, it served its purpose, but it was not pretty."

It can take up to 700 bags to make just one 6-foot-by-2-foot mat. Roby gets donations from neighbors through posts on the Nextdoor app.

The first time she did it, she says, the response was overwhelming.

"Oh, my gosh, my house was full," she says with a laugh. "I was having anxiety."

Donors take her bags by the bagful when she's running low.

"I couldn't do it without them," Roby says.

She sits at a table in her living room and smooths out two bags before cutting off the handles and the bottoms and making loops of plastic strips. She stretches the loops out, ties them together and forms them into balls of "plarn" -- plastic yarn -- that resemble balls of regular yarn.

From there, she crochets the plarn into mats, complete with a strap, which makes it easy to sling over or across a shoulder when the mat is rolled up.

The mats "are very lightweight and it keeps them and their stuff dry," Roby says. "It's not attractive to bugs and it really radiates your body heat back."

"I've had interest in people wanting to learn how to make them, but we haven't been able to get together to do it," she says. "I'd love to be able to get more people into making these."

Almost every one of her mats have been given to The Van. She gave one, however, to a homeless man she met at Kroger.

"He said that he had a tent, but that he had been sleeping in his car. I had a mat in my car and gave it to him. He was really happy and asked how it was made."

Creating and donating the mats has its own rewards, Roby says.

"It makes me feel good to make somebody's life a little bit better. I don't want to leave this earth and not have made some sort of positive impression. I can't do it financially, so I do what I can with what I have."