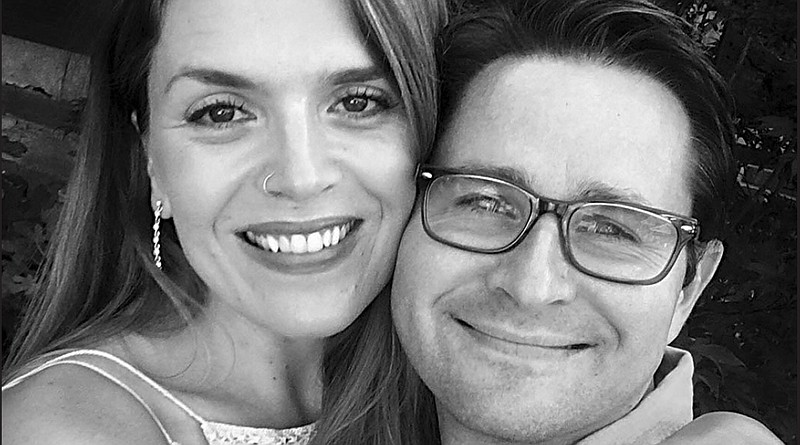 Lauren and Josh Kinder met at Arkansas State University at Jonesboro where they were both studying art. (Special to the Democrat-Gazette)

There were no fireworks the moment Lauren Baker and Josh Kinder met, but a shooting star lit the way for them to move from friendship to romance.

They had seen each other around Arkansas State University at Jonesboro for months before they met in the art department, both there to work on projects for classes they didn't have together.

"Our styles were completely different," says Josh, who was a sophomore in 2000. "She had on these big baggy clothes and I was sort of preppy at the time. We were definitely opposites."

Lauren was studying studio art and she often spent hours in the studio creating and building sculptures.

"He just was not my type, at all. I didn't usually date boys as cute as he was, and he dated cheerleaders-- I was not that kind of girl," she says of Josh. "But we became friends. It was the best friendship."

Josh was in the graphics art department.

"He has a beautiful aesthetic. It's one of the things I've always admired about him," she says. "His photographs are beautiful and his work was top notch."

They gravitated toward each other because of their religious faith and because they didn't enjoy the same activities as most of their classmates.

"We were friends with everybody but we didn't like to party," Lauren says. "So a lot of times on the weekends we would just kind of hang out and watch movies or study and work or cook dinner or whatever. Sometimes we would go to church together. We were just sort of funneled together because of what we chose to do."

For three years they were best friends. Lauren had another year of college after Josh graduated and moved to Little Rock so he could start work for Lockheed Martin at Little Rock Air Force Base.

"I was used to spending all this time with him, and when he was gone I really missed him," she says. "We would sometimes meet in Memphis and just go do things like we did when we were in college together. We were still just friends."

That summer, Josh visited Lauren at her family's home in Lepanto.

"We went out to look at the stars because they are really beautiful out there," she says. "I asked him if he had ever seen a shooting star before and he said he hadn't."

They found a dark spot in an open area and watched the sky.

A few days later, Josh sketched a shooting star for Lauren and wrote her a letter.

They dated long distance for almost a year as Lauren traveled to Italy to study fashion design.

By December 2005, after they had dated for about six months, Lauren thought she saw signs that Josh was going to end their relationship.

"He started to be really weird, really stressed out," she says. "I am the stereotypical messy artist. While we were dating, I had crazy stuff in my car and in my dorm room, which was an insane mess," she says. "I mean, I totally had my act together, but I just could function that way and he didn't. He started being critical about all of that. I was really sad."

Instead of breaking up, Josh proposed. They went out for a nice dinner and saw "Cinderella" at Arkansas Repertory Theatre, and afterward they stopped by Josh's loft apartment downtown.

"I opened the door and there were Christmas lights hanging everywhere, and there were candles and music," Lauren says. "He kind of just danced and twirled me around and sat me down and then he got down on one knee and proposed."

His criticism, she surmises, stemmed from the fact that subconsciously he was considering they would soon be blending their styles in one household.

Lauren said yes, and told Josh she needed at least six months to plan the wedding.

"I was studying fashion design and my first big goal was to make a couture-level wedding dress," she says.

Josh was patient as Lauren designed and sewed, understanding that they couldn't spend as much time together as she worked because he couldn't see the dress before the wedding.

"I was always at home working on my own," she says.

They were married in a small ceremony on June 10, 2006, at Trapnall Hall in Little Rock.

All the stars -- shooting and otherwise -- have aligned for them, allowing their artistic and organizational skills to, indeed, blend since they fell in love.

"I think we've sort of met in the middle over the years," Josh says. "We've become more similar."

She says: “I thought he was a cute boy but he was really preppy. Not that I wasn’t impressed, but I just never would have entertained the idea of dating a guy who looked and dressed like him.”

He says: “Our styles were completely different.”

She says: “I felt like I was doing everything that I needed to be doing at that moment and everything was right.”

She says: “There’s a prayer from St. Francis that says you should seek not so much to be understood as to understand. You have to seek to understand your partner and where they’re coming from.”

He says: “Live your life trying to make your spouse happy instead of making yourself happy.”