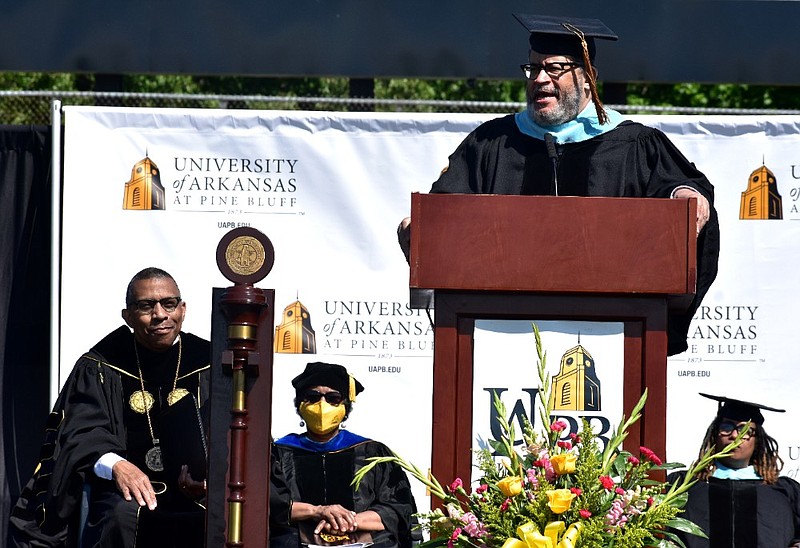 Sociologist, columnist and MSNBC political analyst Michael Eric Dyson spent much of his 24-minute speech to University of Arkansas at Pine Bluff graduates Saturday morning teaching how to survive a pandemic -- not just the current health crisis -- and taking shots at former President Donald Trump, whom he accused of using racist rhetoric while in office.

At least 581,000 coronavirus-related deaths had been reported in the U.S. as of Saturday.

"Here you are graduating in a class that has seen the rise of multiple pandemics," Dyson told more than 300 graduates receiving their degrees at Simmons Bank Stadium. "In the 1990s, they called them syndemics, a synthesis of two pandemics. On the one hand, we have seen the global virus that has besieged bodies across this world, even here today in America, where upwards of 600,000 people have died from an invisible virus that has attacked our bodies."

Black Americans and other people of color, Dyson said, are vulnerable to dying from the disease because of preexisting conditions. Therein lies the pandemic of racial inequality, suggested the Vanderbilt University professor and bestselling author.

"People ask, 'Why don't Black people take better care of themselves?'" he said. "Well, if we had equal access to health care, routine visits to doctors, that would be grand and great. ... They don't even give us remedies for pain, as if we're still seen as shadowing animals able to absorb the trauma and terror for the hurt and pain that we see, and the underlying conditions of white supremacy, social injustice, economic inequality."

Dyson added that Americans have lived through four years of what he called "the most ignorant, anti-democratic" presidency with Trump, referring to the Republicans' attacks on democracy rather than the opposing party.

Among his motivational talking points, Dyson encouraged graduates to prioritize, take what they do seriously but not themselves too seriously, and prepare before the storm of life comes.

"Learn to play," Dyson, a minister by background, said in his preaching tone. "Learn to have a sense of frivolity and frolicking in the midst of your difficulty, in the midst of the hurt and pain, the trauma, the trial and tragedy."

With that, Dyson segued into his next motivational point -- and most graphic criticism of the day against Trump and the Republican Party.

"Be prepared for the next pandemic. That means they're coming again," he said. "Y'all here in 2021, and they've got preparations to deny you voting across this country. Let's not act like it's bipartisan -- mostly right-wing Republicans. I know we're in Republican territory. I know I'm talking to many Republicans. Shame on you, then. Shame on you. I ain't ashamed. You should be ashamed. You should be ashamed that a white supremacist logic infested the mouth and the mind of a bigoted person who used to stand up everyday to excrete the feces of his moral depravity into a nation he turned into his psychic commode."

The lowering trends of covid-19 in Arkansas allowed UAPB officials to stage a traditional ceremony for the spring semester, but with graduates, faculty and visitors socially distancing and wearing masks. As a covid-19 protocol, graduates exited the stadium with family members waiting behind the visitors' bleachers after Pine Bluff pastor Matt Mosler gave the benediction.

"It means a lot, a lot of hard work and dedication," James said. "I'm 45 years old. I went back and got my degree here in '97 as a chemist, so it was a big challenge. It's very rewarding."

James pursued computer science because she was inspired by doing research with technology used to help fight lupus as part of the Phototonics team on campus. James has been diagnosed with lupus.

"We developed a sensor to detect photosensitivity in lupus," she said. "We actually are also working in the physics lab as well. We're going to do an app together, so that's what inspired us to do that. This is lupus awareness month, so wear your purple."

Former Pine Bluff School Board member Henry Dabner earned his baccalaureate degree in general studies from UAPB, 32 years after beginning college at the University of Arkansas at Monticello.

"I went there for a semester after I got hurt playing football, and then I came back here and just decided to finish up," Dabner said, adding he raised a family and put his children through college before returning to school. He owns a trucking business in Pine Bluff.

"Sitting on the School Board, instead of preaching education, I decided to come back and be an example for other young kids and even older people who want to go back to school," he said. 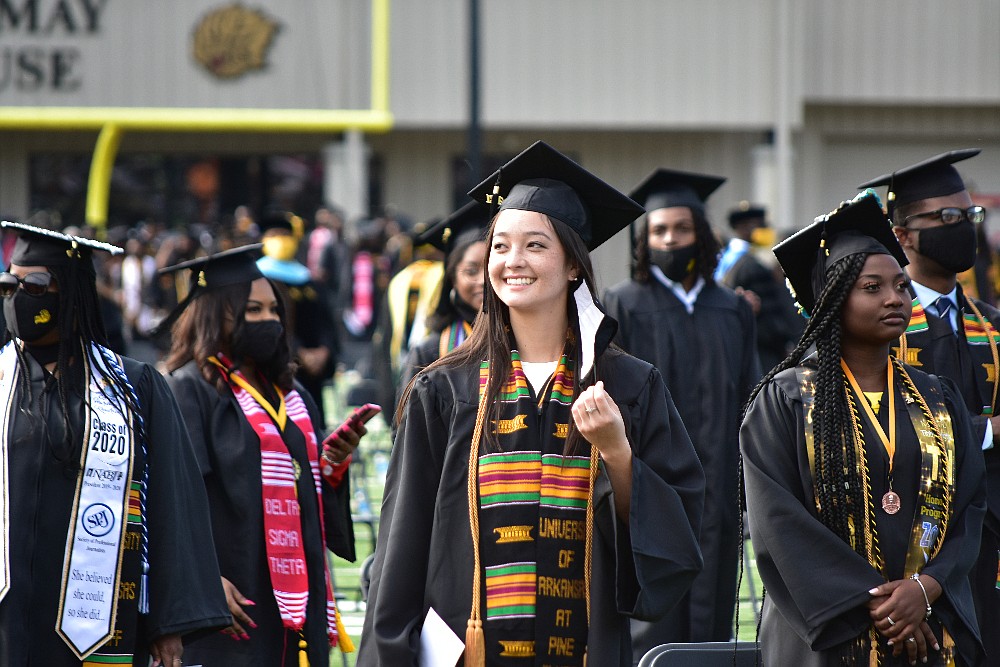 A UAPB graduate looks into stands at the start of spring commencement Saturday, May 8, 2021, at Simmons Bank Field. (Pine Bluff Commercial/I.C. Murrell) 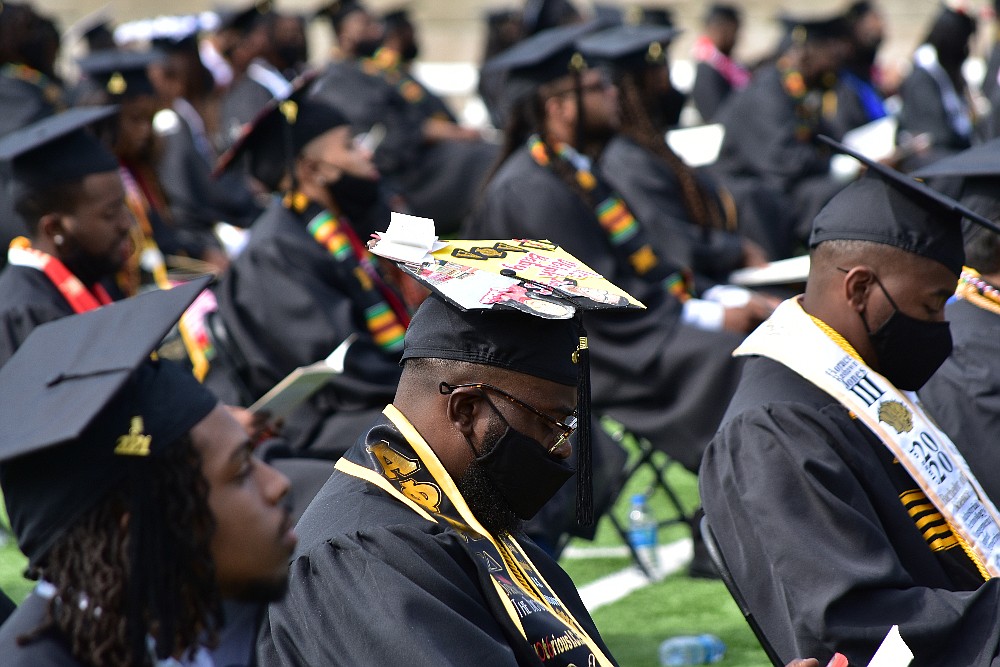 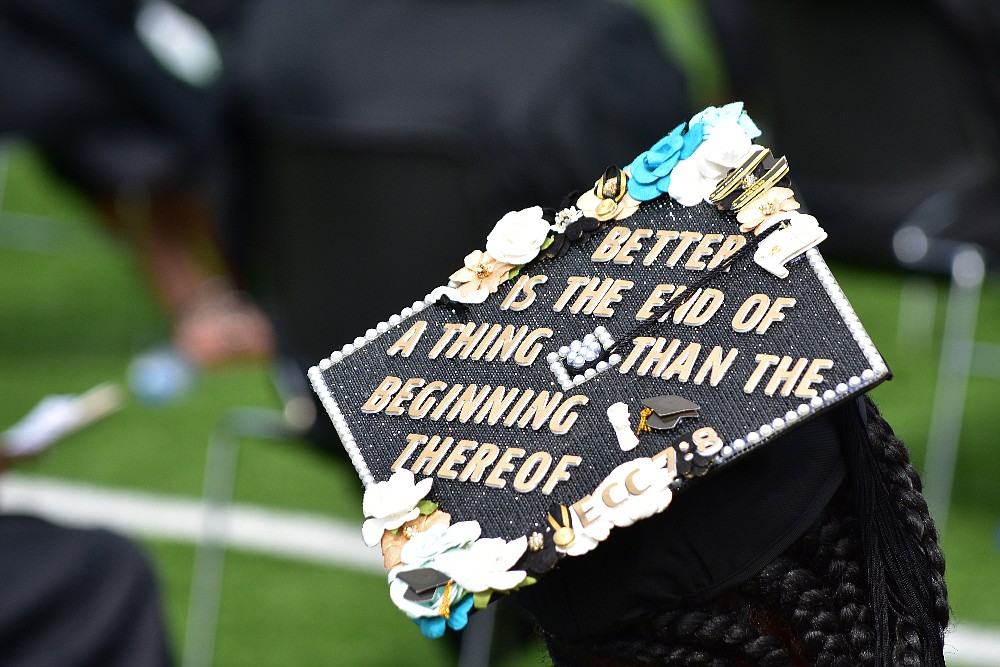 A student wears a designed mortar board with a King James Version scripture of Ecclesiastes 7:8 during UAPB spring commencement Saturday, May 8, 2021, at Simmons Bank Field. (Pine Bluff Commercial/I.C. Murrell) 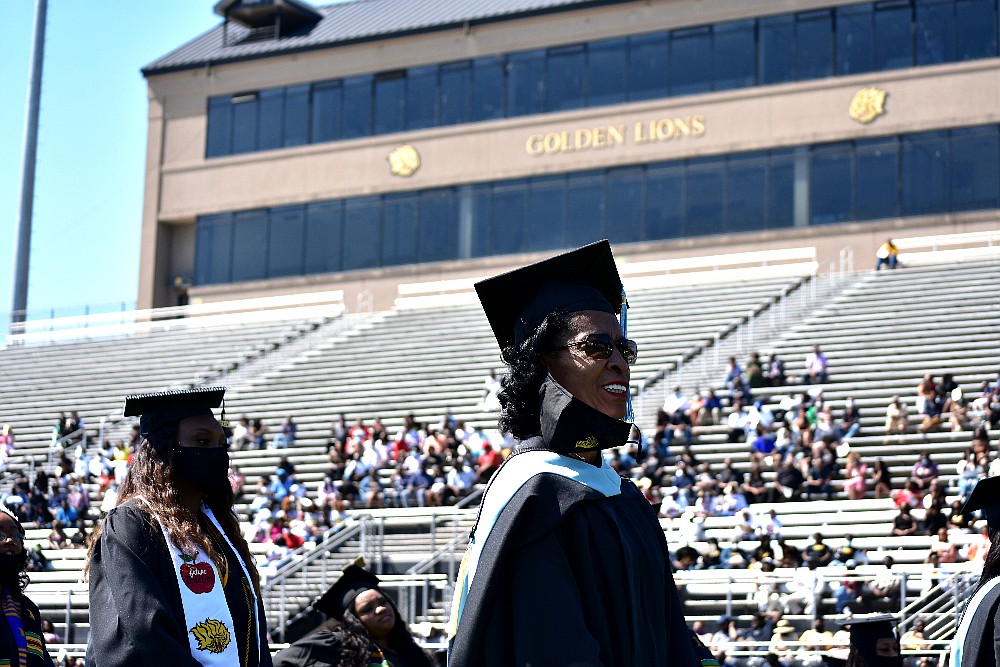 Trudy Redus of Pine Bluff, foreground, stands as graduates in the School of Education are recognized during UAPB spring commencement Saturday, May 8, 2021, at Simmons Bank Field. (Pine Bluff Commercial/I.C. Murrell) 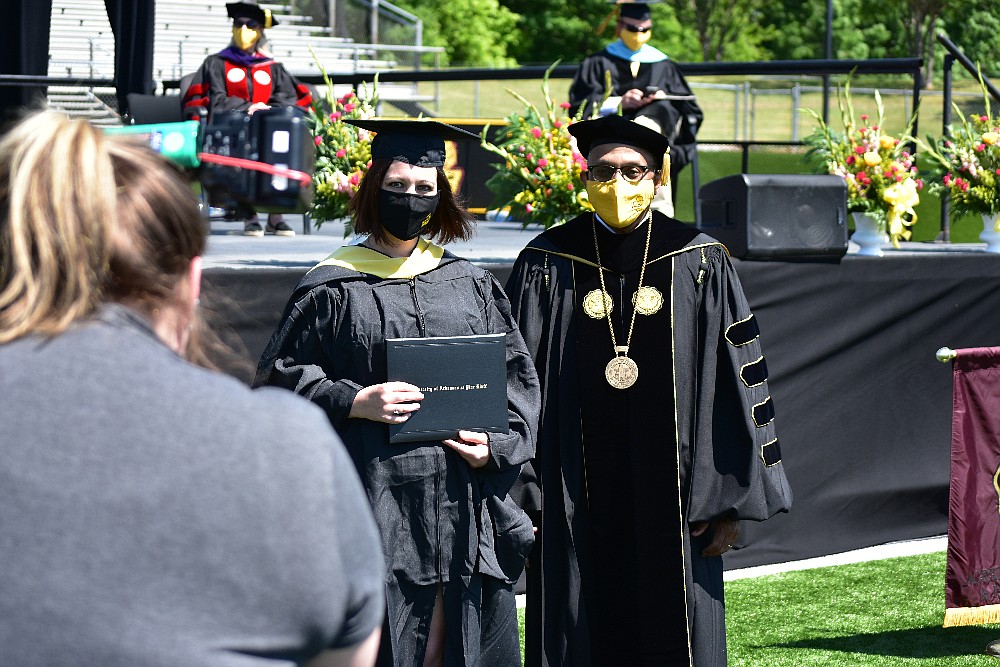 A UAPB agriculture student poses with UAPB Chancellor Laurence B. Alexander for a photo upon receiving her degree Saturday, May 8, 2021, at Simmons Bank Field. (Pine Bluff Commercial/I.C. Murrell) 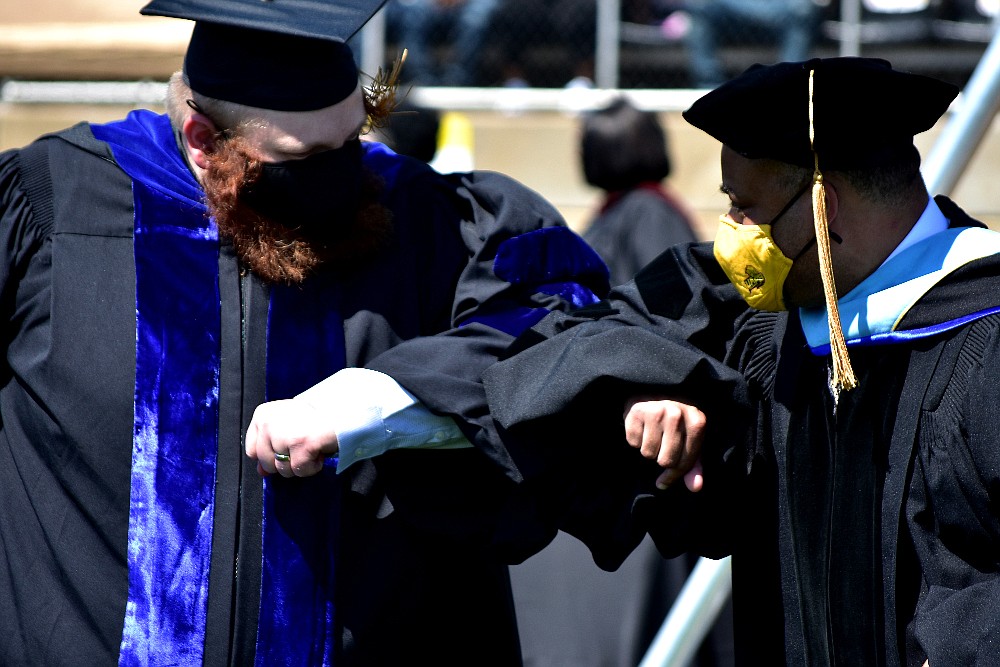 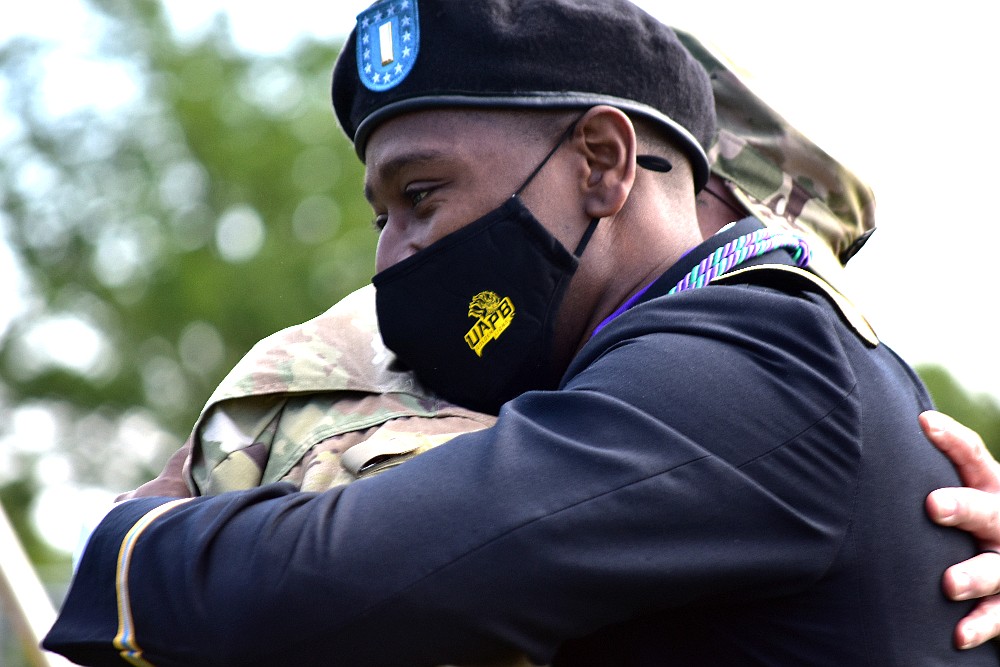 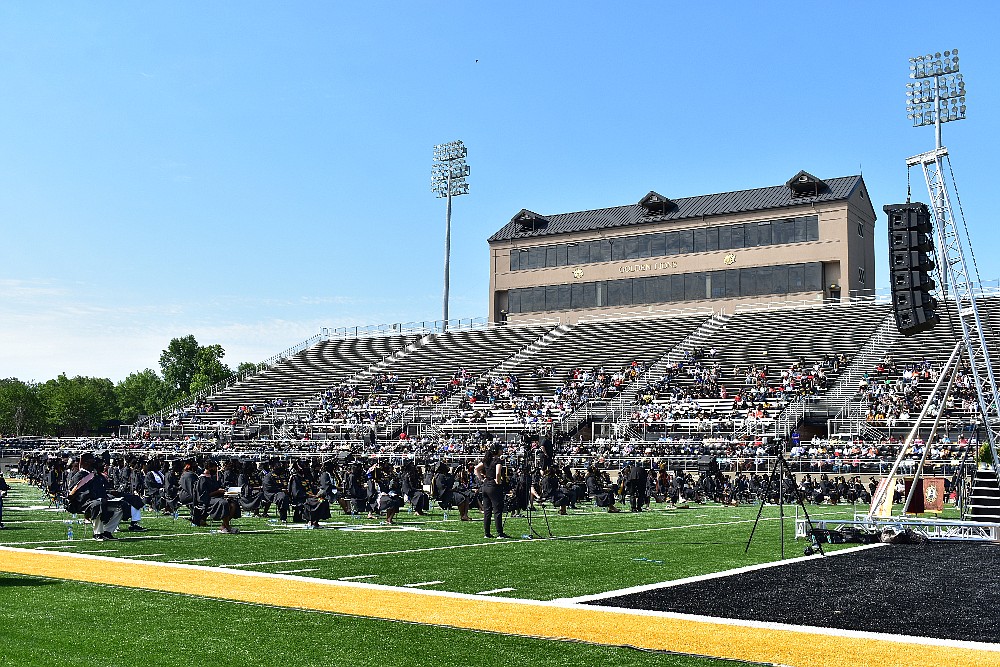 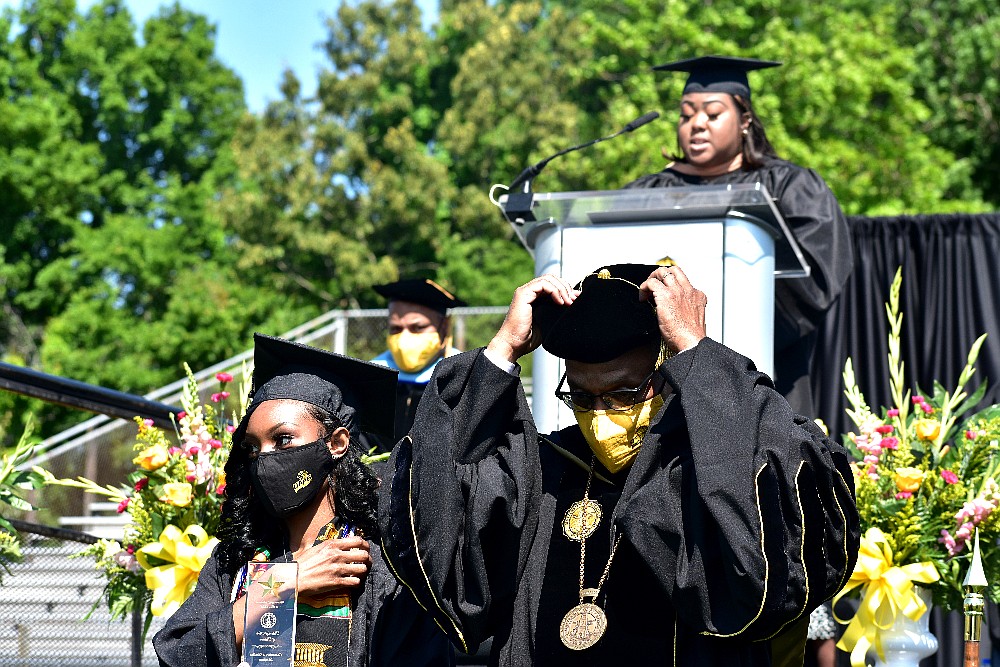 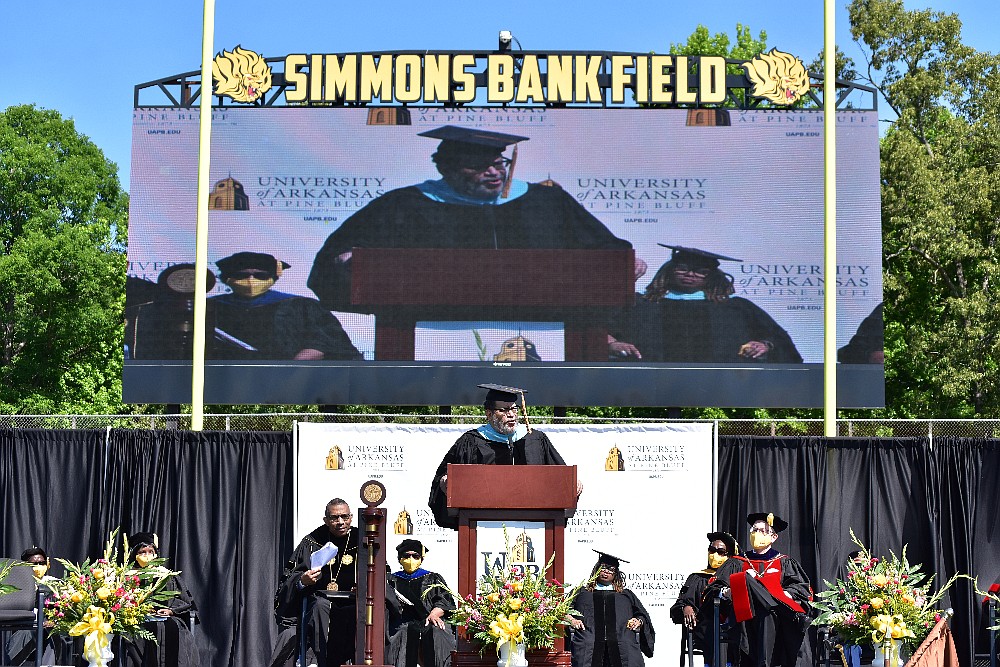 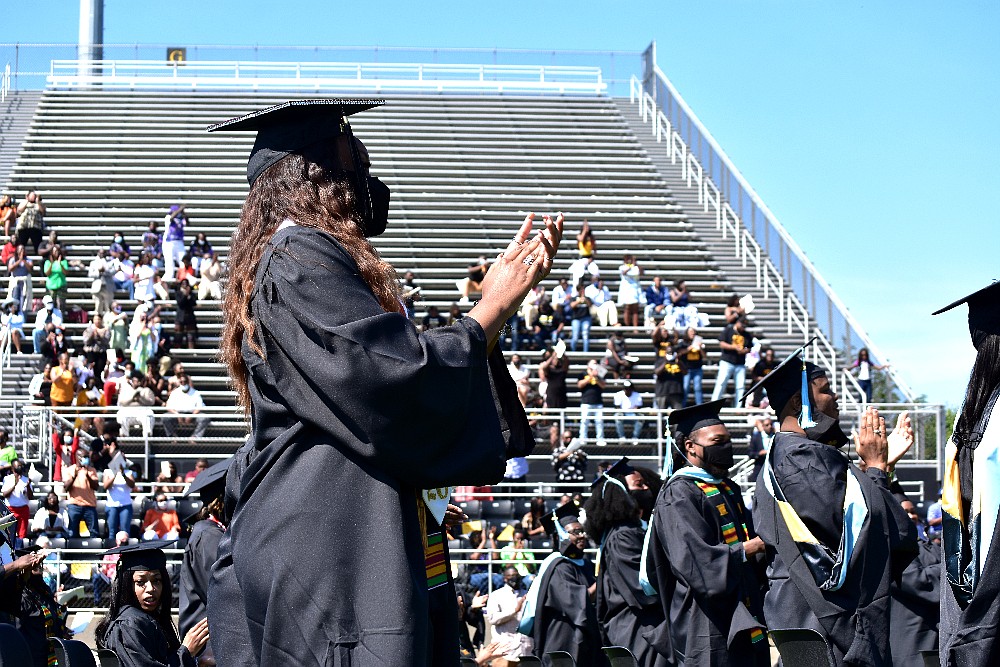