Suspension of patents not a fix, EU asserts by Compiled Democrat-Gazette Staff From Wire Reports | May 9, 2021 at 9:25 a.m. 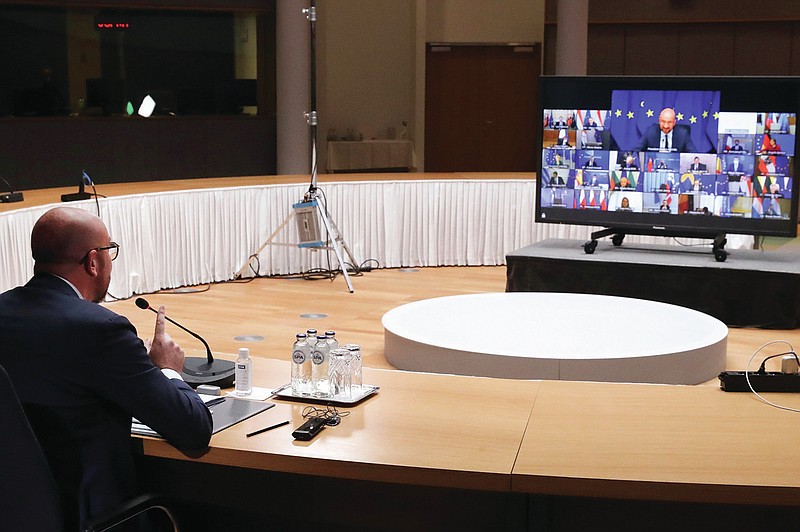 PORTO, Portugal -- European Union leaders on Saturday cranked up their criticism of the U.S. call to waive covid-19 vaccine patents, arguing the move would yield no short-term or intermediate improvement in vaccine supplies and could even have a negative effect.

On the second day of an EU summit in Portugal, the European leaders instead urged Washington to lift export restrictions if it wants to have a global impact on the pandemic.

[Video not showing up above? Click here to watch » https://www.youtube.com/watch?v=1y3E2exuRrA]

"We don't think, in the short term, that it's the magic bullet," European Council President Charles Michel said. French President Emmanuel Macron insisted that giving any priority now to a discussion of intellectual-property rights "is a false debate."

Chancellor Angela Merkel of Germany, home to many big pharmaceutical companies, went the furthest of all, cautioning that relaxing patent rules could harm efforts to adapt vaccines as the coronavirus mutates.

"I see more risks than opportunities," Merkel said. "I don't believe that releasing patents is the solution to provide vaccines for more people."

Instead, the leaders joined previous EU calls for President Joe Biden to start boosting U.S. vaccine exports as a way to contain the global covid-19 crisis, insisting that move was the most urgent need.

"I'm very clearly urging the U.S. to put an end to the ban on exports of vaccines and on components of vaccines that are preventing them being produced," Macron said.

He mentioned the German company CureVac, saying it could not produce a vaccine in Europe because the necessary components were blocked in the United States. Hundreds of components can go into a vaccine.

Merkel said she hoped that "now that large parts of the American population have been vaccinated, there will be a free exchange of ingredients."

"Europe has always exported a large part of its European production to the world, and that should become the rule," the longtime German leader said.

While the U.S. has kept a tight lid on exports of American-made vaccines so it can inoculate its own population first, the EU has become the world's leading provider, allowing about as many doses to go outside the 27-nation bloc as are kept for its 446 million inhabitants.

The EU has distributed about 200 million doses within the bloc while about the same amount has been exported abroad to almost 90 countries. Former EU member Britain has acted similarly to the U.S.

"First of all, you must open up," Macron said in addressing the United States. "First of all, the Anglo-Saxons [the U.S. and Britain] must stop their bans on exports."

The EU is trying to regain the diplomatic initiative on vaccines after Biden put it on the back foot with his surprising endorsement of lifting patent protections on vaccines, seeking to solve the problem of getting shots into the arms of people in poorer countries.

Nevertheless, Biden's move has proved popular within his Democratic Party and could ultimately serve as leverage over pharmaceutical companies.

Jeff Zients, the president's covid-19 response coordinator, said Friday that supporting a waiver is "the right thing to do," but conceded that the waiver alone won't give the world enough vaccine.

"That's why we will continue to ramp up our efforts -- working with the private sector and all possible partners -- to expand vaccine manufacturing and distribution around the world and increase ... the important supplies, the raw materials, the equipment needed to make the vaccines," Zients said.

Macron and other EU leaders have insisted that production capacity first must be ramped up by reconverting factories so they can quickly start producing vaccines through a transfer of technology.

"Today, there is not a factory in the world that cannot produce doses for poor countries because of a patent issue," Macron said.

The U.S. has sent 4.2 million AstraZeneca shots -- which aren't authorized for use in the U.S. -- to Mexico and Canada, and says it plans to ship another 60 million by the end of June. The doses are undergoing a safety review. Pfizer Inc. also has begun fulfilling non-U.S. orders from its U.S. production, but hasn't said how many doses it has shipped or which countries have received them.

"The European Union is the only continental, democratic region of this world that is exporting on a large scale," said European Commission President Ursula von der Leyen.

Waiving patents won't speed the manufacture of vaccines. The proposal angered the developers who delivered lifesaving doses in record time. But Biden's decision to support waiving intellectual-property rights for coronavirus shots had a broader purpose: to broadcast his administration's commitment to global leadership.

More than a month of internal debate led up to Biden's decision last week to endorse international calls to strip patent protections for vaccines.

The policy shift, embraced by many charitable service organizations around the world and liberals at home, wasn't new. Biden endorsed it during his campaign for the White House. But the idea was the subject of pitched discussions inside the administration over how best to bring the pandemic to an end while restoring U.S. influence abroad.

In the best case, officials acknowledge it will take at least a year for any additional vaccines to be produced because of the change. With key European leaders adamantly opposed to the waivers, securing the required consensus at the World Trade Organization may never happen.

The specialized production, particularly of the cutting-edge mRNA vaccines made by Pfizer and Moderna, would take even longer. Moreover, the matter could become less pressing if vaccine manufacturers can produce enough to satisfy international demand.

To Biden, White House officials said, that's largely beside the point, as officials cast the decision as indicative of the president's efforts to return the U.S. to the position of leadership after four years of unilateralism and protectionism under former President Donald Trump.

"This is a global health crisis, and the extraordinary circumstances of the covid-19 pandemic call for extraordinary measures," U.S. Trade Representative Katherine Tai said Wednesday in announcing the move.

The announcement was met with surprise and disappointment by some of Biden's closest European allies. Merkel of Germany quickly weighed in against it, with a government spokesman saying it would cause "severe complications" for the production of vaccines.

The timing of the decision also blindsided the vaccine companies, which had aggressively discouraged the administration from making a choice they feel will hurt American producers.

Officials noted, however, that Tai held more than two dozen meetings with stakeholders, including the drugmakers.

Commerce Secretary Gina Raimondo also opposed the plan, but was excluded from the final meeting, two people familiar with the decision-making process but not authorized to speak publicly said on condition of anonymity. Other White House officials highlighted the practical limitations of Biden's decision, but the symbolism won the day.

"The Chinese Communist Party is already celebrating this gift from President Biden," tweeted Sen. Tom Cotton, R-Ark., as he highlighted a comment from a Chinese official praising Biden's action.

Meanwhile, the European Union cemented its support for Pfizer-BioNTech and its covid-19 vaccine technology Saturday by agreeing to a contract extension for a potential 1.8 billion doses through 2023.

Von der Leyen of the EU Commission said her office has approved a contract for a guaranteed 900 million doses, with the same amount as a future option.

The contract, which has the unanimous backing of the 27 EU member nations, will entail not only production of the vaccines but also make sure that all the essential components are sourced from the EU.

The European Commission currently has a portfolio of 2.6 billion doses from half a dozen companies. Pfizer-BioNTech had an initial contract of 600 million doses with the EU.

Saturday's announcement also underscores the confidence the EU has shown in the technology behind the Pfizer-BioNTech vaccine, which works differently from the Oxford-AstraZeneca vaccine.

"But of course, we will also explore other contracts, for example based on other technologies like the protein-based technologies. The key point is to keep our options open," von der Leyen said.

The active ingredient in the Pfizer-BioNTech shot is messenger RNA, or mRNA, which contains the instructions for human cells to construct a harmless piece of the coronavirus called the spike protein. The human immune system recognizes the spike protein as foreign, allowing it to mount a response against the virus upon infection.

The announcement of the huge contract extension was made as the EU is looking for ways to meet the challenges of providing the necessary booster shots to people who already have received a vaccine dose, expanding vaccination drives to include children and teenagers, and the emergence of possible new virus variants.

The size of the contract -- 1.8 billion doses for a bloc of 450 million residents -- will provide for a lot of options, von der Leyen said.

"That includes the possibility for the member states to donate or resell doses" at a lower price to help nations in the immediate neighborhood or beyond, she said.

The AstraZeneca vaccine had been central to Europe's immunization campaign, and a linchpin in the global strategy to get vaccines to poorer countries. But the slow pace of deliveries has frustrated the Europeans and they have held the company responsible for partly delaying their vaccine rollout.

While the EU is developing a vaccine certificate valid throughout the 27-nation bloc, summer vacations abroad should be possible again even for people who haven't had their shots, she said.

"If you look at the low incidence that some of our European partner countries already have ... then I'm very hopeful that we can also generally afford to do what was possible last summer, too," Merkel said.

She cited the sharp drop in cases in Portugal in recent months after the country imposed a drastic lockdown.

Portugal had one of the highest infection rates worldwide in January, but by Friday the seven-day rolling average of daily new cases stood at 3.3 per 100,000 inhabitants -- about a quarter of the rate in the United States.

Merkel said Germany also appears to have broken its most recent outbreak.

"Step by step, more will be possible in Germany, too, wherever the incidence drops, and that will hopefully be the case for all of Europe," she said.

Even if case numbers drop, some countries are likely to impose restrictions -- such as mandatory testing and quarantine -- for travelers who can't prove they've been vaccinated or recovered from infection. 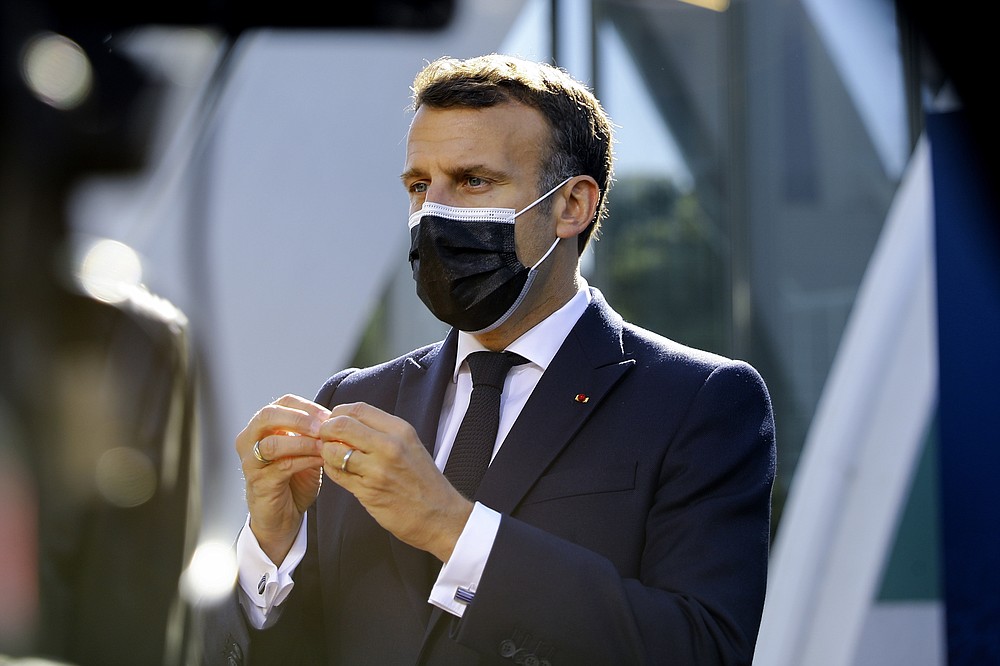 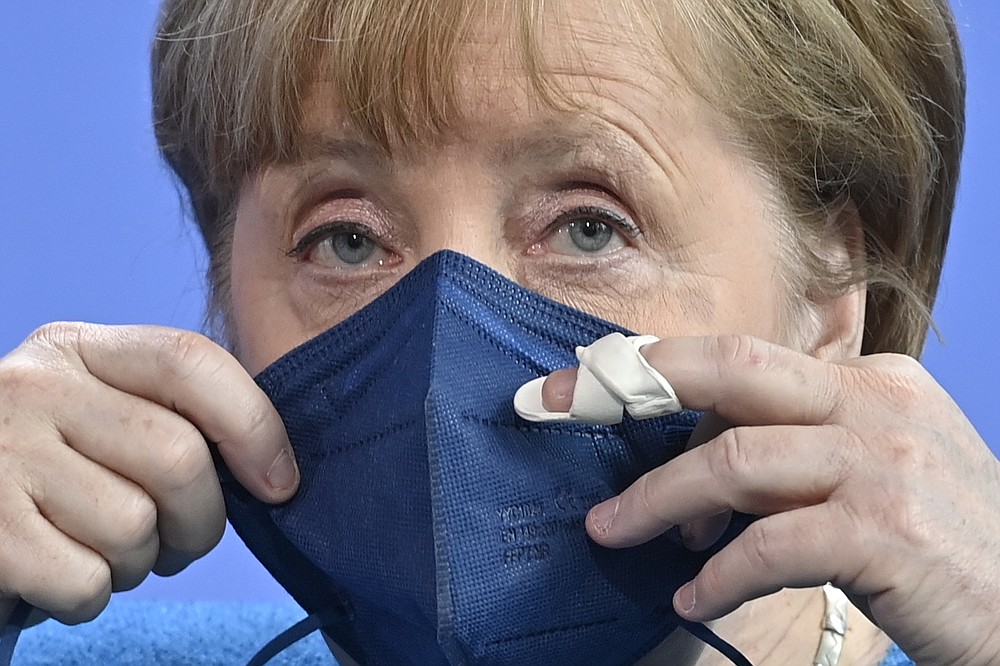 German Chancellor Angela Merkel puts her face mask on after a press conference after the informal EU summit and the EU-China summit in Berlin, Germany, Saturday, May 8, 2021. Merkel reiterated her stance that the shortage of vaccines worldwide would not be solved by a waiver of patents, as suggested by U.S. President Biden. (John MacDougall/Pool Photo via AP) 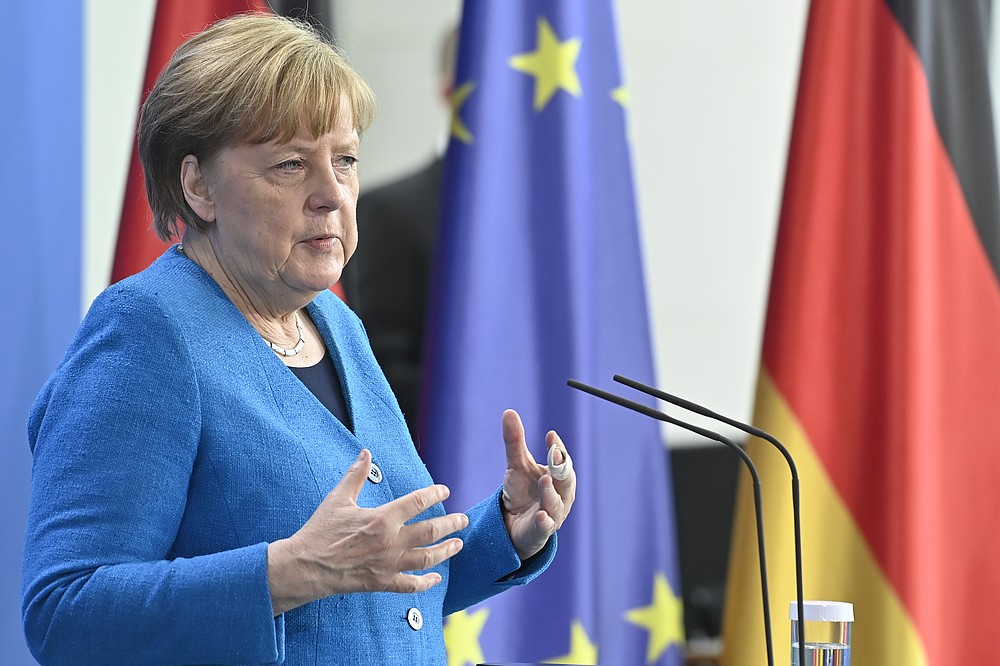 German Chancellor Angela Merkel attends a press conference after the informal EU summit and the EU-China summit in Berlin, Germany, Saturday, May 8, 2021. Merkel reiterated her stance that the shortage of vaccines worldwide would not be solved by a waiver of patents, as suggested by U.S. President Biden. (John MacDougall/Pool Photo via AP) 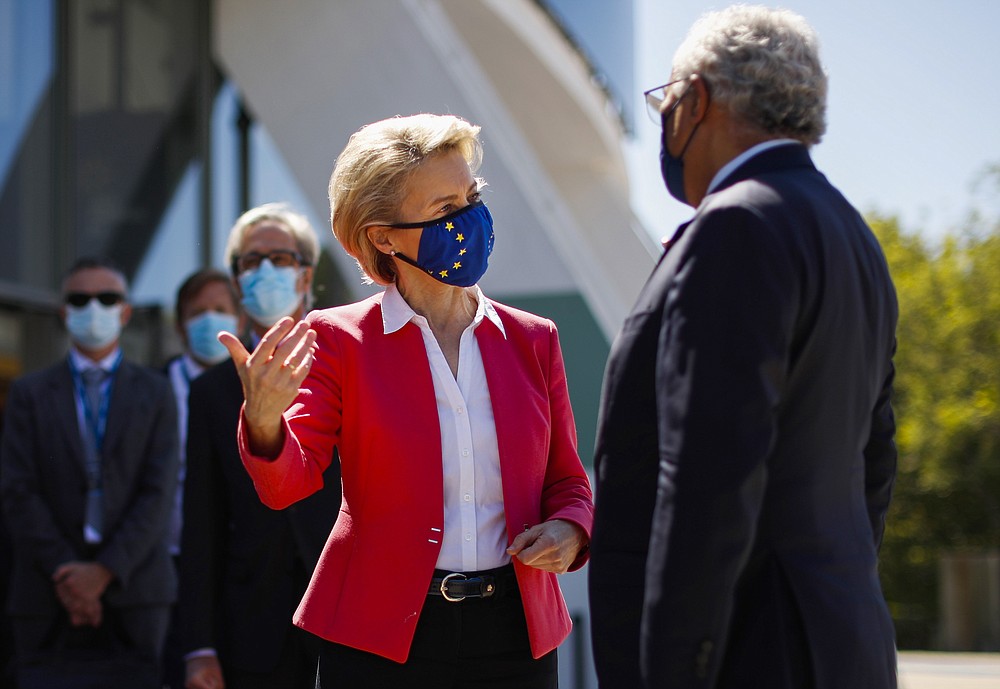 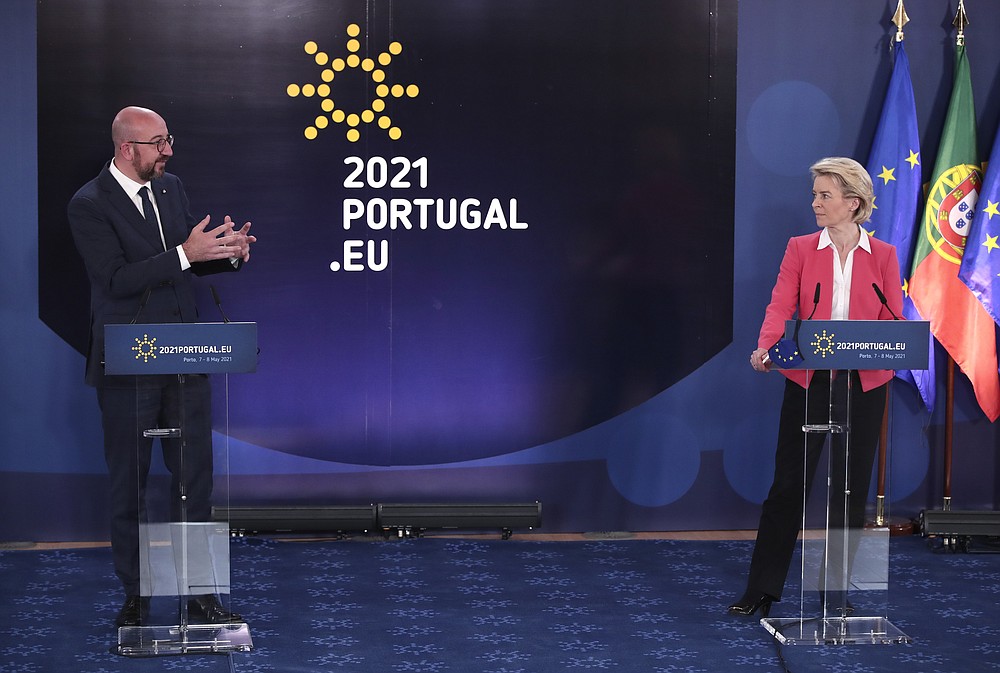 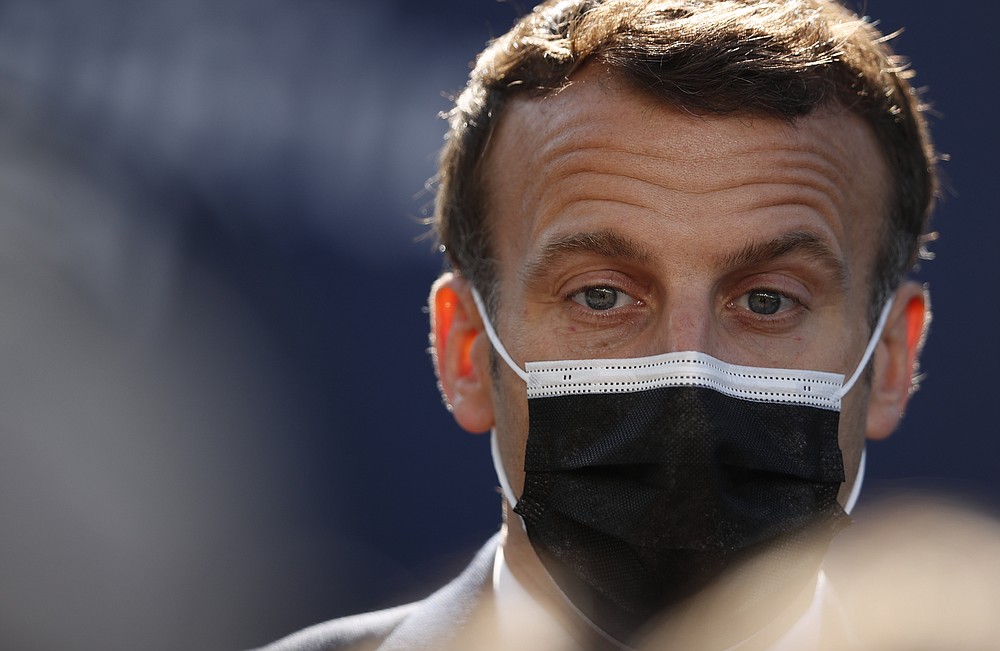 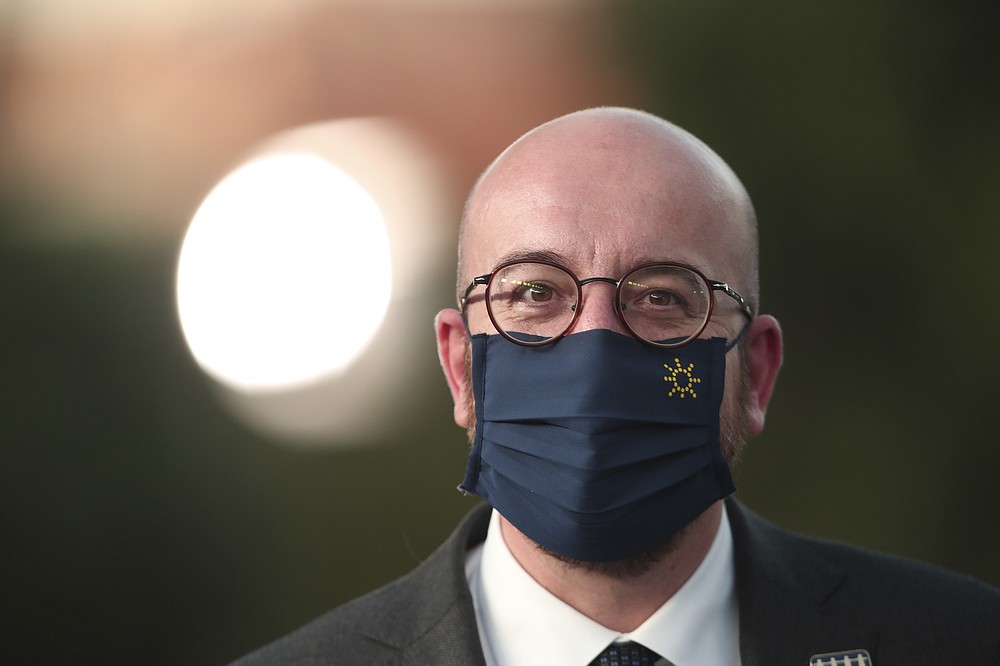 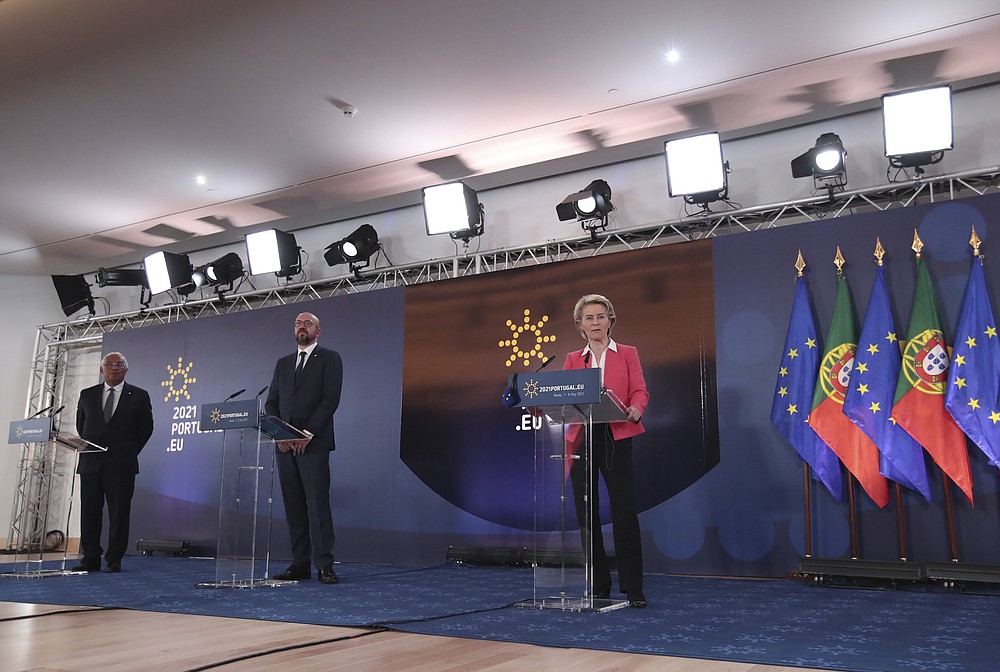