OPINION | GAME ON: 'Medieval Dynasty' revels in the mundane world 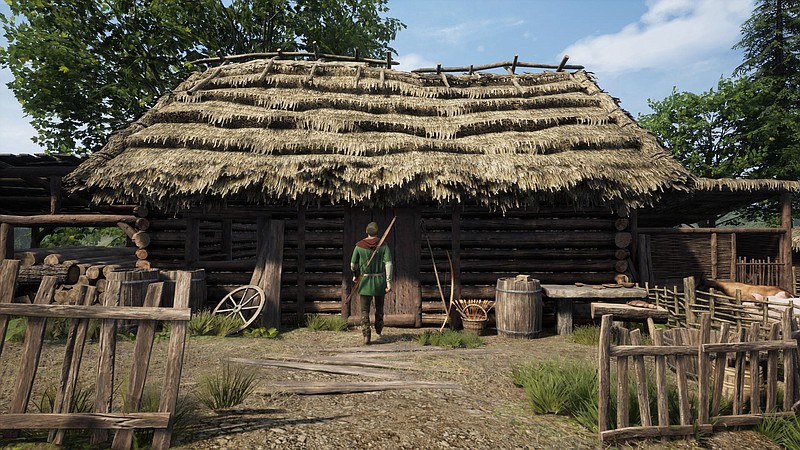 in the video game "Medieval Dynasty" you play as a European peasant building a village and securing a future for your heirs, who you will play as later. (Courtesy of Toplitz Productions)

Going by just the title, you might think a game called "Medieval Dynasty" would be about kingdoms, conquest and swordfighting. Instead, it's the kind of experience that might happen in the background of such events.

You're basically a peasant, and your goal is to build a village, start a family, find success and create wealth to pass down to the next generation.

"Medieval Dynasty" might sound like a survival-crafting role-playing game, but it's really sort of a life simulator that revels in the mundane.

Players begin the game as a hardworking 18-year-old man named Racimir. After a war broke out and he lost everything, he sought out his uncle, who lived in a peaceful valley far from war, so that he could start a new life. As it turned out, his uncle has died; but Racimir is invited to build as he wishes in the valley, so long as he pays the required taxes.

Your task as Racimir is to spend your days building your own village, slowly expanding it over time and acquiring a better reputation.

The game cycles through spring, summer, autumn and winter, and each season brings different opportunities and challenges. Making sure you have enough food stockpiled for winter is important, and having enough coin stockpiled to pay taxes each spring is also vital.

Many of the traditional survival RPG mechanics are in place: an inventory, skill trees unlocked by gaining experience, a journal and a nonplayer-character quest system are immediately noticeable.

Players can customize their new games using a variety of settings that change the difficulty. The first choice is how many days each season will last. The default setting is three, but it can go up to more than a dozen. Each day takes 24 to 35 minutes. Other options include setting a tax rate multiplier, which can make the game much harder, or giving yourself unlimited health, unlimited carrying weight, and so on.

A fairly robust tutorial, done through a series of NPC quests, gets players started in the game. This will include building your first home, planting a field, hunting and exploring some of the map.

There are several villages spread out across the valley, and you can choose anywhere that isn't directly next to an existing village as your spot to build. Picking a good spot to build is important. Ideally, you'll want a large, flat area, because it can be difficult to place buildings on uneven terrain. You'll want a water source nearby, such as a river, lake or stream, and a nearby forest to collect wood. And you won't want to be too far from other villages, so that you can easily trade.

It might be best to build a small house near the starting village and then explore to decide where to put down roots permanently. As Racimir completes quests, chops trees, builds and farms, he'll gain experience and will unlock more buildings and abilities.

It's fairly straightforward. Produce as much as you can, keep what you need to survive and sell the rest for profit. Use those profits to pay taxes, buy equipment and unlock new craftable items. It could take several years, but eventually Racimir will be able to afford some real medieval luxuries, such as a donkey, to help carry heavy loads. Other barnyard animals, such as chickens, ducks, pigs, cows and horses, are also available.

A big part of the game is automation. As your village grows, you'll be able to attract villagers. In a fief management screen, you can assign them to tasks that they will automatically perform each day, such as sowing fields, collecting stones or cutting logs. Eventually, you'll build workplaces where they'll take those raw materials and craft them into sellable items.

You can even assign which house villagers will live in, and they'll start their own families, too.

Something to consider when choosing the number of days in a season is that your character will die about age 60, at which point your heir (should you have one) will take over. At three days a season, it will take about 200 hours of playing for your heir to take over.

In the beginning, you will always be short on time and working in the dark to get things done, but as you have more NPCs come to your village to help out, the time you need to spend personally doing everything shrinks.

"Medieval Dynasty" isn't a finished game — it's still in early access and developers are adding content, fixing bugs and balancing changes — but it's definitely an interesting, fun game.

Currently, the only enemies to fight are wolves, bears, bison and feral hogs, but eventually it's likely that bandits will also join the valley, so for right now it's a mostly peaceful existence.

Rating: Appropriate for anyone 8+