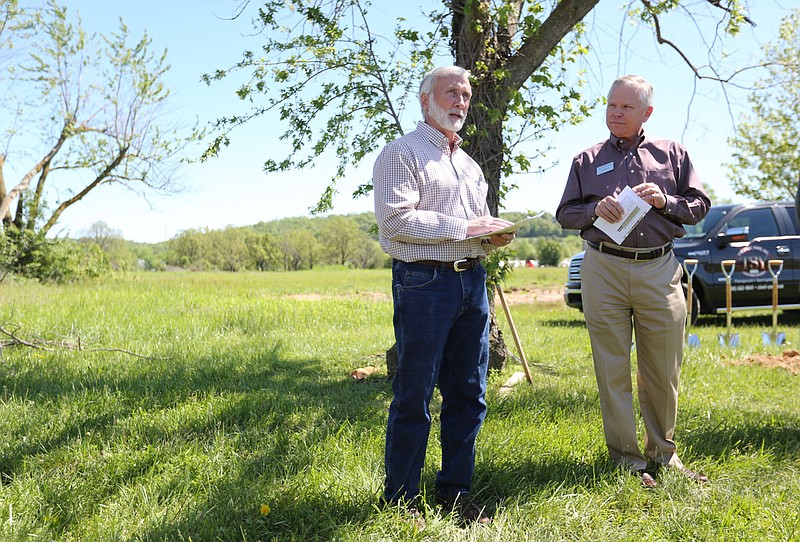 Bill Rogers (right), president of the Springdale Chamber of Commerce, listens to Mark Broadway, general manager of The Steel Yard, Inc., Wednesday, May 5, 2021, before participating in a groundbreaking ceremony for The Steel Yard, Inc., with other local officials and business men and women at 1768 E. Mountain Road, the new site in Springdale. The Steel Yard is a steel service center providing carbon steel, stainless steel and aluminum products. Check out nwaonline.com/210509Daily/ and nwadg.com/photos for a photo gallery. (NWA Democrat-Gazette/David Gottschalk)

The Public Facilities Commission sold three industrial properties for a total $1.1 million during the first quarter of 2021.

The companies ultimately might add about 120 jobs. Two of the companies are new to the area.

The Steel Yard broke ground Wednesday on East Mountain Road. Cypress Cold Storage Companies closed on a property on Angell Drive last month. Modern Fence will expand out its back door to a lot on Turnbow Avenue.

The covid-19 pandemic forced some businesses to close temporarily or permanently, but Springdale ran only a mild fever, said Bill Rogers, chamber president.

Commercial and residential development in the Arvest Ballpark district continued, as did housing booms in the northwest and southeast corners of the city.

Downtown efforts at revival and renewal are advancing as seen by the removal of older buildings, construction of the city's Municipal Campus, progress on the Blue Crane mixed-use project and the occupancy of some mixed-use multifamily housing, Rogers said.

Jeffery Cooperstein, a research assistant at the Center for Business and Economic Research at the University of Arkansas, said there's a lot of demand for industrial space in Northwest Arkansas.

"There's not a lot out there," he said. "Building is expensive, and people are willing to pay more for it."

"We had as much activity during the pandemic as we have for the last five years," he said.

Northwest Arkansas and its growing population continue to garner interest on a national level, he said.

One of the larger threats to attracting industry is the low unemployment rate, Rogers said. The rate was 3.5% in Northwest Arkansas on March 31, compared with the nationwide average of 6%, according to the Bureau of Labor Statistics.

The company has been selling in Northwest Arkansas since February, with product delivered on trucks overnight from Paragould, Horton said.

Most of the steel used in construction comes from beyond a 100-mile radius of Northwest Arkansas, Broadway said. "We are here to serve," he said.

The company, operating out of Paragould for 35 years, plans a 39,600-square-foot warehouse and 2,400 square feet of office space. The company paid $420,000 for 7 acres, Edmondson reported. The project will cost about $4 million, Broadway said.

Company officials hope for completion in October, but the weather must cooperate, he said.

The company will employ 20 in its first year. It plans two additional warehouses if the venture in Springdale is successful, Broadway said.

The company plans a 180,000-square-foot building in Springdale, which will employ about 50, to serve food manufacturers. The company also plans to move its headquarters to Springdale, McAfee said.

McAfee said the company will let the Arkansas Economic Development Commission announce the cost of the project. Cypress worked with state officials to complete the details of the project. The company received money from the state as an incentive for the expansion.

Cold storage facilities in Northwest Arkansas are full, Cooperstein said. He noted the pandemic probably increased the demand because shipping was disrupted and delayed.

"You have to have somewhere to store the food products safely until they can be delivered," he said.

Modern Fence opened its plant on Ford Avenue in 2005, according to the company's website. It most recently bought the lot behind it in the industrial park for expansion, Edmondson said.

The company bought two acres for $35,000. The company sells and builds fences in all materials and manufactures wood and metal fencing.

Plans for the site haven't been determined, Edmondson said.

Rogers said a limited labor force is a national issue.

Workers dropped out during the pandemic, giving up the search for jobs, the Labor Bureau explained in a March article on its website.

"Our labor force is about 300 to 350 people shy of what it was before the pandemic," Rogers said.

Broadway noted the Steel Yard has some concern that it will have the employees with the trade skills needed.

"We're a family company with stable growth and competitive pay," he said. "And if an employee ever has a problem, he can talk to one of the owners."

Cooperstein said companies will ask for referrals from employees, and he also expects some poaching from other companies.

Creation of new jobs will provide residents a chance to improve themselves and make better lives for their families, Rogers said.

"At the end of the day, that's why we're in business," he said. "To improve the quality of life and increase opportunities for better in Springdale." 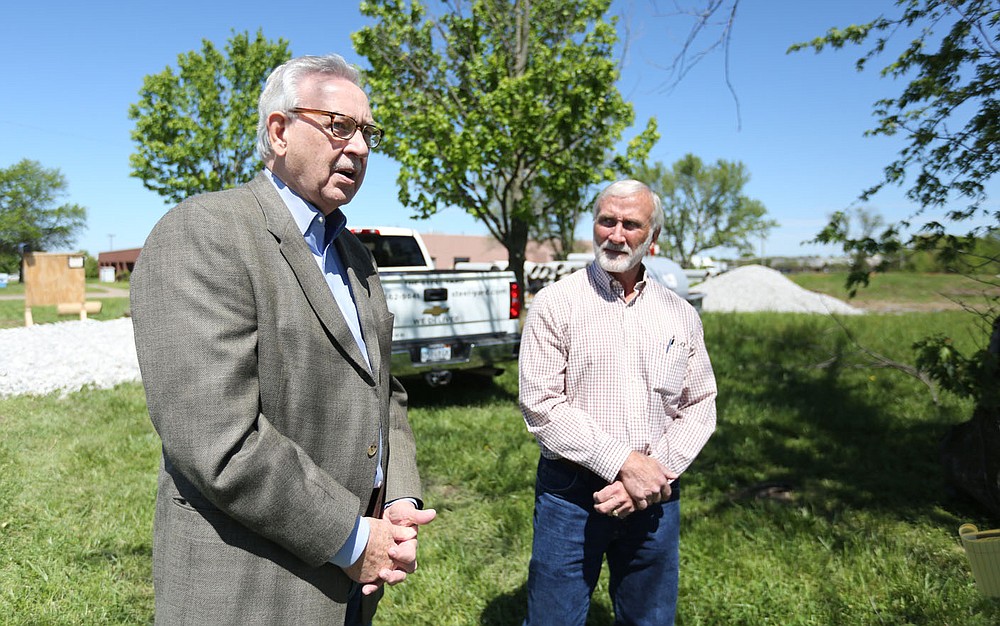 Mark Broadway (right), general manager of The Steel Yard, Inc., listens to Jerry Horton, sales manager, Wednesday, May 5, 2021, after participating in a groundbreaking ceremony for The Steel Yard, Inc., with other local officials and business men and women at 1768 E. Mountain Road, the new site in Springdale. The Steel Yard is a steel service center providing carbon steel, stainless steel and aluminum products. Check out nwaonline.com/210509Daily/ and nwadg.com/photos for a photo gallery. (NWA Democrat-Gazette/David Gottschalk) 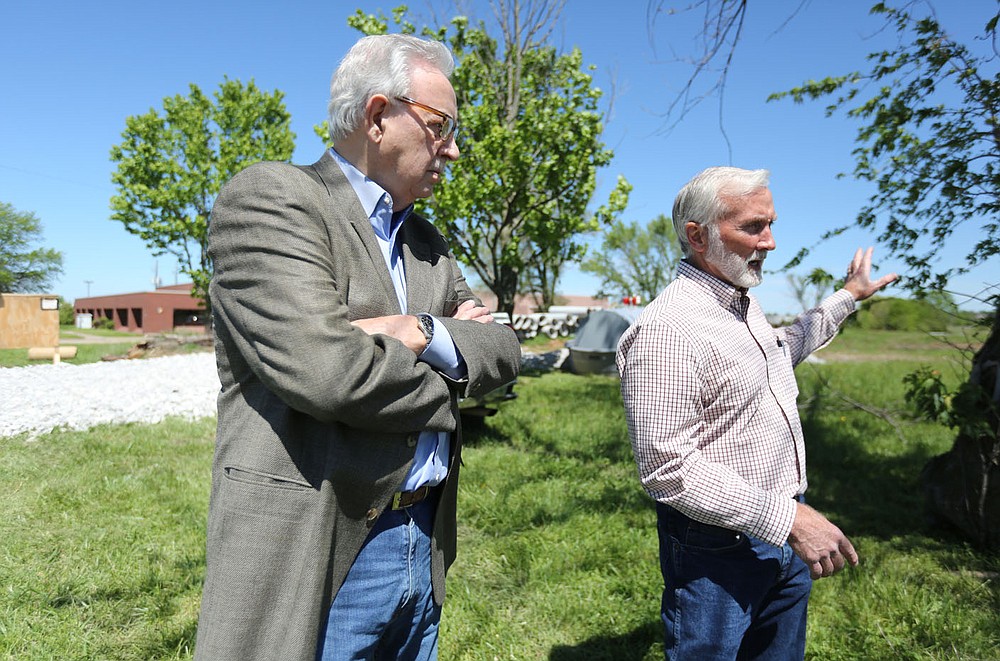 Jerry Horton (left), sales manager with The Steel Yard, Inc., listens to Mark Broadway, general manager of The Steel Yard, Inc., Wednesday, May 5, 2021, after participating in a groundbreaking ceremony for The Steel Yard, Inc., with other local officials and business men and women at 1768 E. Mountain Road, the new site in Springdale. The Steel Yard is a steel service center providing carbon steel, stainless steel and aluminum products. Check out nwaonline.com/210509Daily/ and nwadg.com/photos for a photo gallery. (NWA Democrat-Gazette/David Gottschalk)
More News

The Public Facilities Board is charged with buying, improving and selling land for industrial growth and public facilities.

The Springdale board owns four 2-acre lots on Turnbow Avenue, several acres in the technology park along East Huntsville Avenue and 12 to 15 acres on Kendrick Avenue off Old Missouri Road.

The board also owns Arvest Ballpark and rents it to the Northwest Arkansas Naturals baseball team.

The Public Facilities Board puts the money from the sale of property into buying more land, said Scott Edmondson, vice president for economic development at the Springdale Chamber of Commerce. The chamber administers the workings of the board.