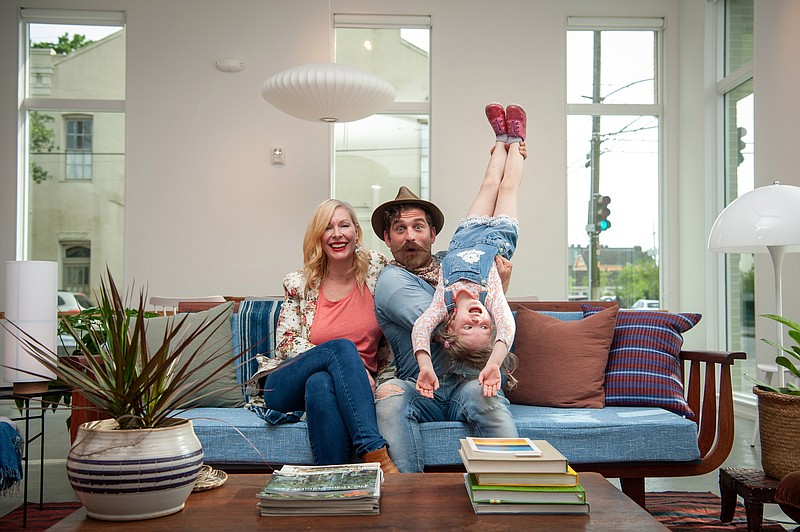 Shana Betz and Walker Babington with their daughter, Willa, pose in the lobby of Travelers New Orleans . They are both artists who live in the building at no charge in exchange for working 20 hours a week there. (Rory Doyle/The New York Times)

For one thing, there's no breakfast (for now, anyway). For another, the phrase "conjures images of lace curtains and doilies," said Ann Williams, who, with her mate, Chuck Rutledge, and a few other partners opened the nine-room, frippery-free inn in the Lower Garden District recently.

Williams said she preferred to call Travelers New Orleans "an artist-run hospitality venture." The lodging is overseen by resident artists, who live on the building's third floor. In exchange for their work (around 20 hours a week) on front-of-the-house jobs such as turning beds and advising guests about local attractions, they receive a furnished room, utilities, studio space and an hourly fee that usually adds up to about $800 a month.

They also receive time — time to paint, write, sculpt, bake or pursue whatever their calling is.

Inspired by the collectively owned and operated 3B — a bed-and-breakfast in the New York borough of Brooklyn that closed in 2016 after a change in the building's ownership — Travelers New Orleans is the second establishment Rutledge and his partners have created with artists running the show. Their first, also called Travelers, opened two years ago in Clarksdale, Miss., where Rutledge lives and works as a developer. 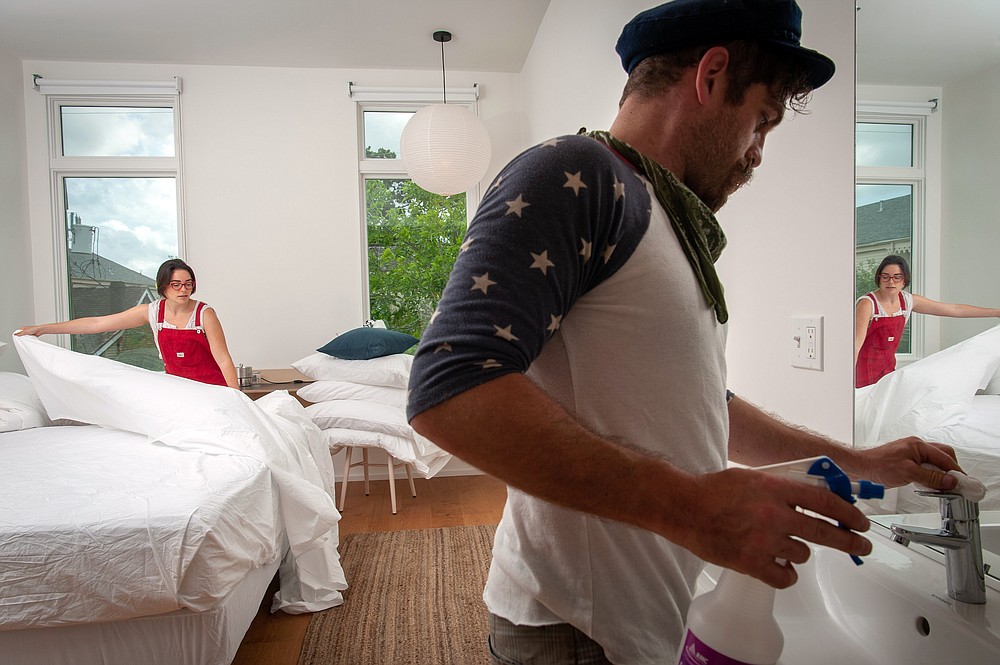 Hannah Richter (left) a writer, and Walker Babington, an artist, clean a room at the Travelers New Orleans. The nine-room, frippery-free inn in the Lower Garden District is overseen by resident artists, who live on the building’s third floor. (Rory Doyle/The New York Times)

He saw good reason for taking the concept to New Orleans. The city has a thriving creative sector that had grown by 59% between 2005 and 2016, but its housing is a reach for artists on a limited income.

According to a report released last summer by the National Low Income Housing Coalition, the average renter in New Orleans makes $16.25 per hour, which is far less than the $20.73 hourly rate required to afford the average two-bedroom house in that city.

For more than a decade, Rutledge and a partner had been sitting on an empty lot in the Lower Garden District. The spot was ideal for the project. It was just a few blocks from the Mississippi River, in a section of the city left relatively untouched by Hurricane Katrina flooding thanks to its high ground, and it's close to attractions such as the marshmallow-pink Grace King House.

Designed by OJT, a local architecture office led by Jonathan Tate, the new, three-story building follows certain conventions of the area. Its shape is based on the long, narrow Creole townhouse (though lacking that style's steeply pitched roof), and its facade is sand-colored brick, which Tate praised for its sense of "permanence, but also depth and material richness." Lap siding made of fiber cement gives a traditional look to the rest of the exterior.

The guest entry is through a side courtyard. It opens to a living room filled with eclectic furnishings such as a Craftsman-style sofa and rattan-armed loungers. The reception desk (in name only, as check-in is contactless), built by an architecture professor at Tulane University, is wrapped in cyanotypes (which are blueprint-like photos) of fan palms, which are spiky, sunburst-like plants. 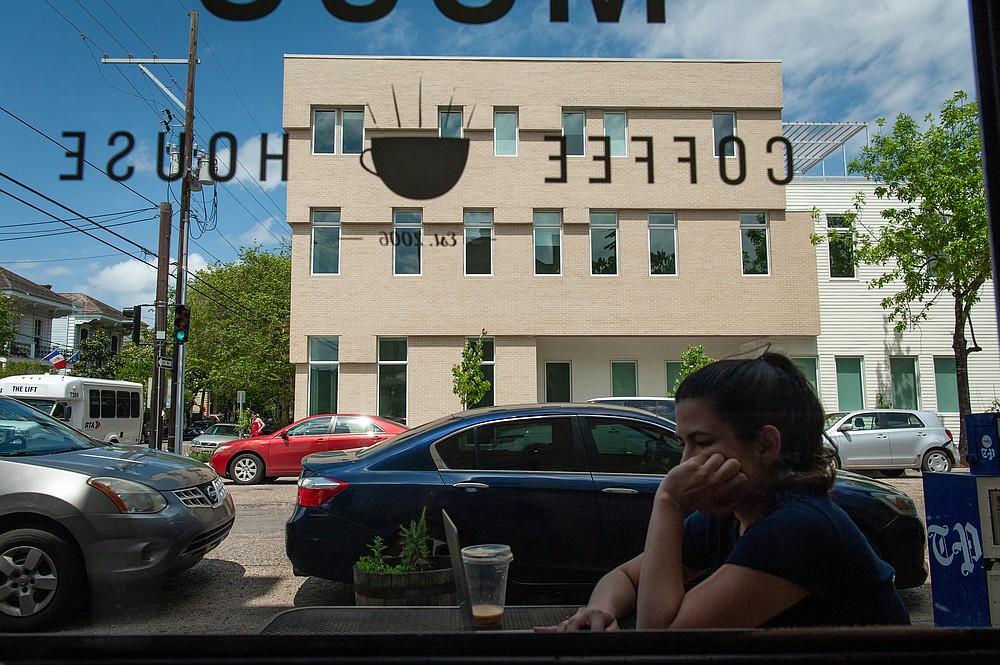 A customer sits at an outdoor table at a coffee shop across the street from the Travelers New Orleans. (Rory Doyle/The New York Times)

In the morning, guests can grab a cup of coffee from the kitchen on the ground floor and read the paper at a jagged-edged communal table. Locals are encouraged to drop by as well, Rutledge said. "If you need a place to have a card game or you want to hang out and play some music, then come do it."

In guest rooms, which average $185 per night, there isn't a lace curtain or doily in sight, but natural fiber rugs, fluffy duvets and Danish lounge chairs. Resident artists at Travelers Hotel Clarksdale fabricated the desks and plywood headboards, which are painted a different color by room — cream, ocher, gray and dark blue.

The design is just a starting point, according to Tate, who is also a partner in the venture. "I like the idea that the spaces accumulate material," he said. There is room for improvisation, and if anything needs to be altered, he isn't far away: His nine-person studio works out of the building's ground-floor commercial space.

Tate's rent and guest room fees will cover Travelers' projected $200,000 yearly operating expenses, as well as help to repay a $1.8 million loan from a local bank. (They also raised $735,000 in equity from investors.) Rutledge anticipates that once the hotel is fully operational, the owners will net $80,000 in profit annually.

The property supports up to four resident artists. Eventually, all tenants will apply online and undergo several rounds of interviews. For now, the inaugural group includes Williams' cousin Walker Babington, who "paints" with instruments such as propane torches and fire-spouting weed killers. The artists share a living room, kitchen and roof deck, offering views of the Crescent City Connection, the pair of bridges that cross the Mississippi River. 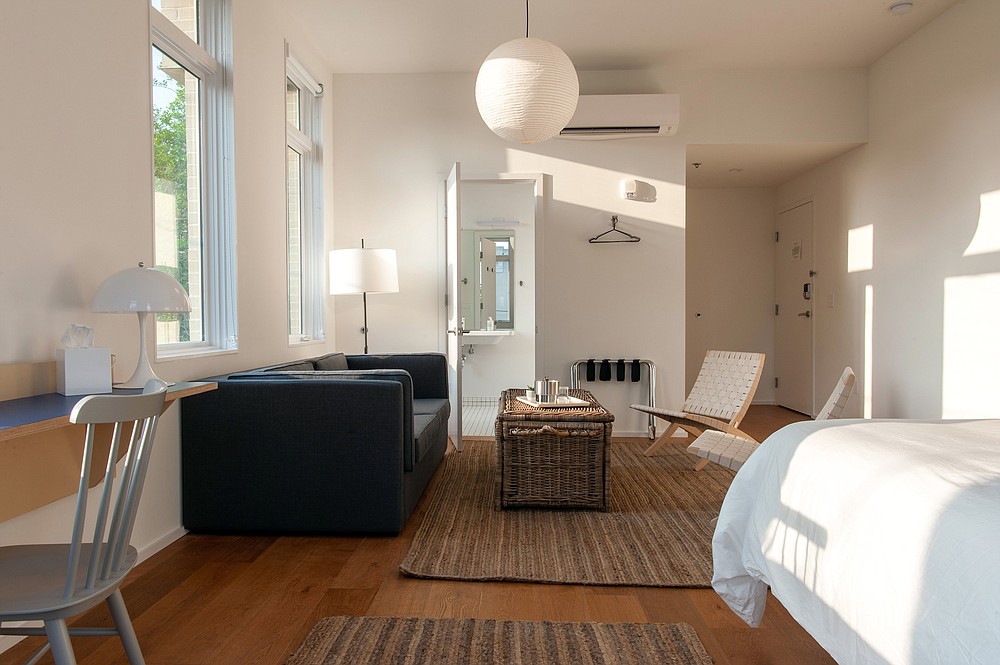 The group was given a budget of about $19,000 to design their own quarters. The furnishings came from thrift stores, estate sales, Facebook Marketplace and Renaissance Interiors, a consignment business in Metairie, La., in neighboring Jefferson Parish. Babington added his own art to the living room: a self-portrait rendered in rust on an old Mercedes hood. The furnishings will remain after the residencies have ended, in a year or more.

"Any artist with a bag full of clothes can walk in the door," said Shana Betz, a filmmaker who is married to Babington. The couple moved into Travelers with their 3-year-old daughter in March after an itinerant year. Now they and another tenant, Hannah Richter, a writer, are poised to become co-owners of the limited-liability company that manages the hotel. The property will remain under the ownership of Rutledge and his partners.

They hope that Travelers will be a place to help artists reclaim time. Betz is using hers to work on a television pilot. Babington said he was looking forward to experimenting with his alarming media in a dedicated studio again.

"Having a big space vastly changes what you're able to do," he said. (The owners have bought a property down the street for the artists to use.)

Richter plans to use her residence to develop a writing portfolio in order to apply to a master's of fine arts program. Describing the appeal of Travelers, she went straight to writer Virginia Woolf: "This is a room of my own where I can live and work without too much distraction."