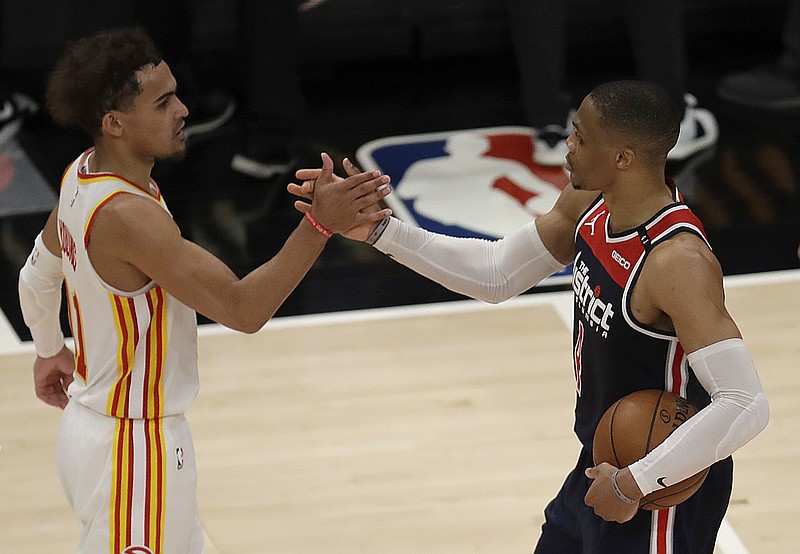 Westbrook completed his 182nd triple-double when he pulled down a rebound with 8:29 remaining, completing his season-long march toward a record that had stood since 1974 and was long considered untouchable. The nine-time All-Star and 2017 MVP finished with 28 points, 13 rebounds and 21 assists as he carried the load for a Wizards team missing Bradley Beal, the league's No. 2 scorer.

"Honestly, it never really bothered me one way or another," Westbrook said. "I'm very confident in the things I do for this game. I take a lot of pride in going out and preparing myself to be one of the most consistent guys in this league. It's a tough thing to be able to do, and I want to give that comfort to my coaches, to my organization, so that when they call my number they know what they're going to get."

Trae Young scored 36 points and John Collins added 28 for the Hawks, who moved within a half-game of the fourth-place New York Knicks in the Eastern Conference. Washington is 10th in the East, which would give the Wizards the final spot in the league's new postseason play-in tournament.

Beal has a strained left hamstring and the Wizards said earlier Monday he would also miss the team's next game, a rematch at Atlanta on Wednesday. He'll be re-evaluated ahead of Friday's game against Cleveland.

Washington called a timeout with 39.7 seconds remaining after Collins' free throws put Atlanta up 125-122. Westbrook followed by hitting a runner, and the Hawks called timeout with 18.2 seconds left.

Westbrook protested briefly that he was fouled on the play, but he got a clean look at a three-pointer with two seconds left. His shot bounced off the rim, and Westbrook pounded the ball hard against the floor when the game ended.

"We talk about Oscar Robertson and a lot of us are not old enough to know how the Big O played, but you're seeing that in Westbrook," interim Hawks coach Nate McMillan said. "His ability to really just dominate a game, score, assist and rebound from that guard position, this is what the Big O was doing a long time ago. To see it at this day and time is incredible."

Bogdan Bogdanovich finished with 25 points and Clint Capela had 22 rebounds for Atlanta, which has won four of five.

Young buried a 27-foot three-pointer to push the lead to 17 points near the end of the third, but after the Hawks went up by a game-high 19 early in the fourth, the Wizards trimmed the lead to one midway through the period.

"He's been relentless," Lopez said. "He's been locked in and that's something that anyone on the roster will tell you. It's trickled down to everybody. It's certainly a boon to have him on the floor with us."

CLEVELAND -- Domantas Sabonis had 21 points, 20 rebounds and 9 assists as Indiana strengthened its hold on a play-in tournament spot with a victory over Cleveland.

Kelan Martin scored a career-high 25 points and Caris LeVert had 20 points and 10 assists for the Pacers, who moved one-half game ahead of Washington into ninth place in the Eastern Conference.

Indiana reduced its magic number for clinching a play-in berth to two with four games remaining. Chicago is 11th -- one spot outside of the play-in tourney.

Collin Sexton scored 25 points for the Cavaliers in their 11th consecutive loss.

Kyle Anderson had 14 points and 4 blocks, while Ja Morant had 12 points and 12 assists.

Nickeil Alexander-Walker led the Pelicans with 18 points, while Willy Hernangomez had 15 points and 8 rebounds. James Johnson and Jaxson Hayes scored 13 points each.

SAN ANTONIO -- DeMar DeRozan had 23 points and San Antonio set a franchise record for points in the first half while rolling over Milwaukee.

San Antonio set a team best with 87 points in the first half, the second most the club has scored in any half. The Spurs tied their mark for any half with 12 three-pointers in the first and finished 17 for 29 from long range.

Bucks forward Giannis Antetokounmpo had 28 points on 11-for-16 shooting. 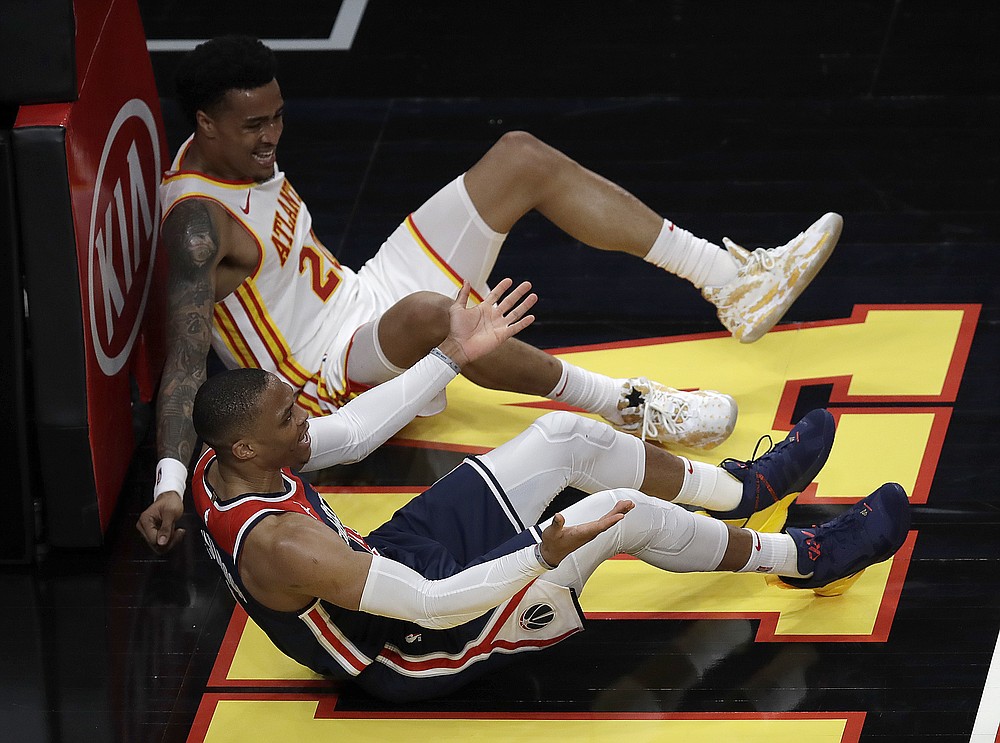 Washington Wizards' Russell Westbrook, foreground, reacts beside Atlanta Hawks' John Collins on the floor in the second half of an NBA basketball game Monday, May 10, 2021, in Atlanta. (AP Photo/Ben Margot) 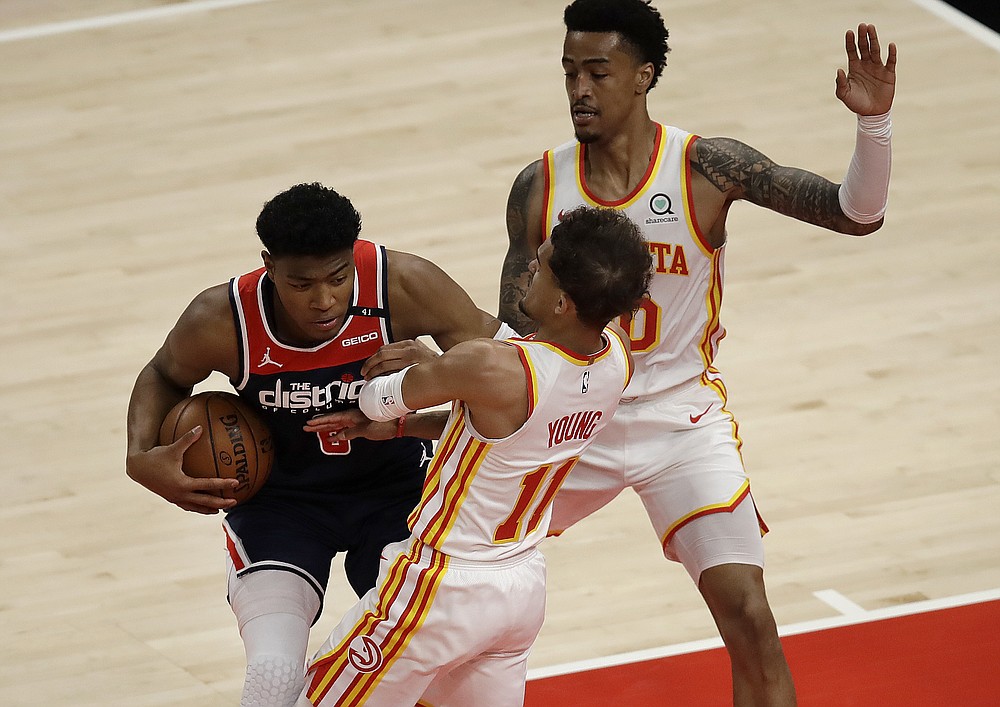 Washington Wizards' Rui Hachimura, left, drives the ball against Atlanta Hawks' Trae Young (11) in the first half of an NBA basketball game Monday, May 10, 2021, in Atlanta. (AP Photo/Ben Margot) 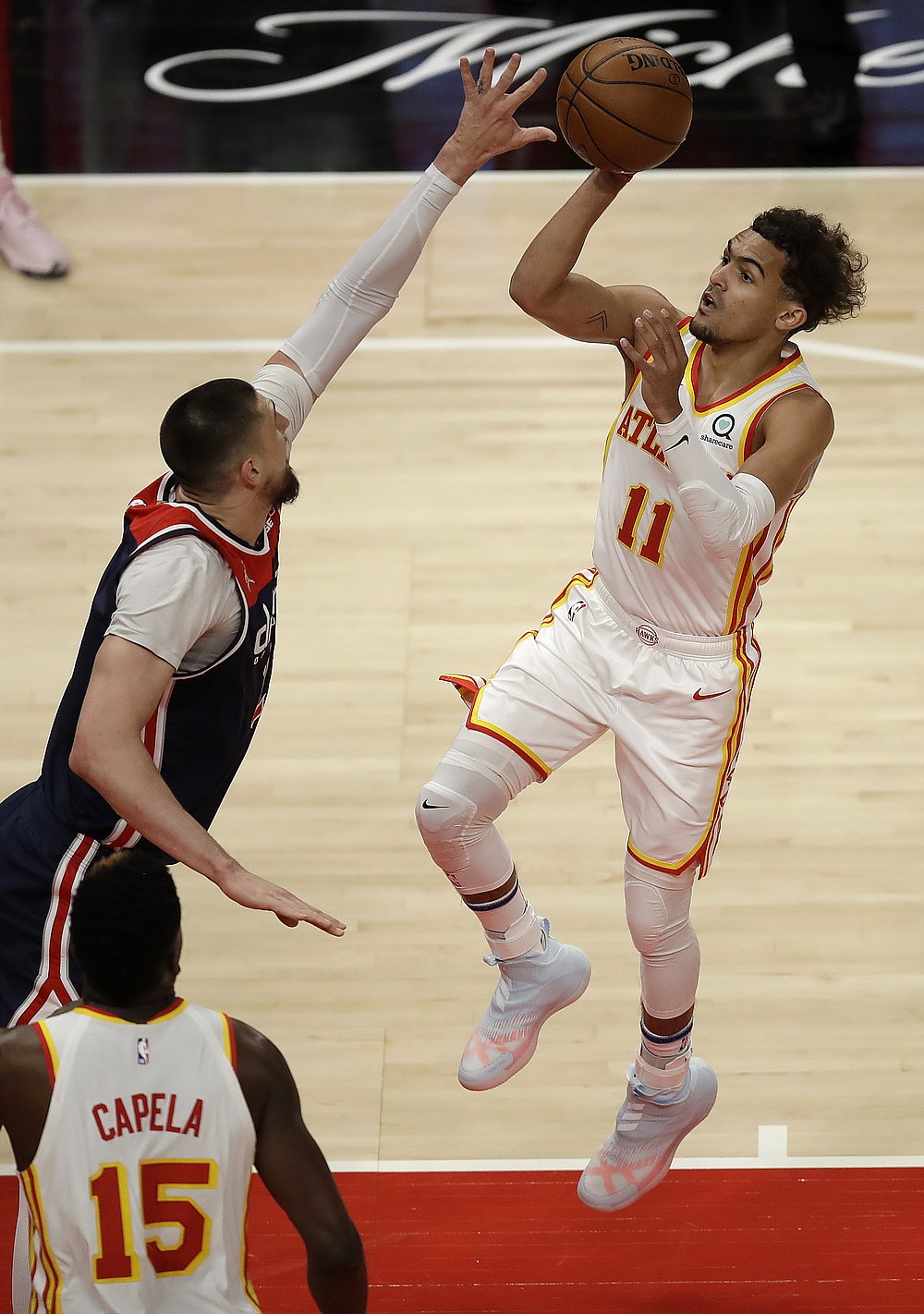 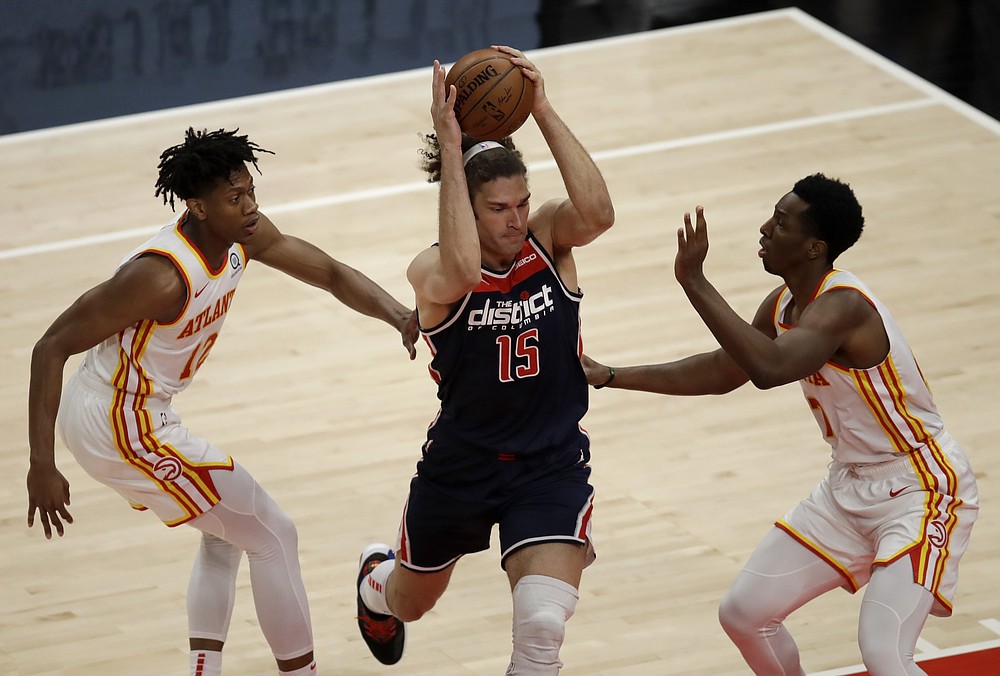