Bridge crack closes off I-40 at Memphis 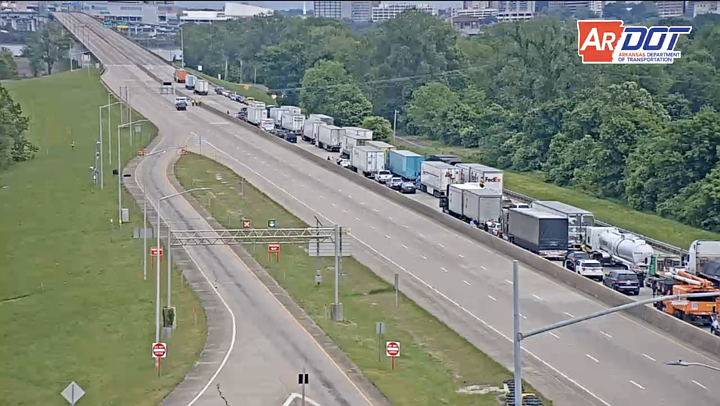 Interstate 40 is temporarily closed in both directions after officials with the department of transportation found a crack in the Mississippi River bridge during routine maintenance.

The Interstate 40 bridge connecting West Memphis and Memphis was closed to all traffic Tuesday afternoon and evening after an inspection found a crack in one of its steel support beams.

The closure of the Hernando de Soto Bridge -- which carries an estimated 41,000 vehicles across the Mississippi River every day -- caused significant traffic delays as authorities redirected both east and westbound motorists to the Interstate 55 bridge just to the south.

A routine inspection via drone revealed the crack early in the afternoon Tuesday, said Dave Parker, the public information officer for the Arkansas Department of Transportation. He did not know the size of the crack, but said it must be serious.

Engineers from Arkansas and Tennessee are examining the crack and collecting information to determine the next steps to restoring the bridge's safety.

"When an inspector notices a crack and calls for an immediate shutdown of both lanes on a bridge, it's very likely significant," Parker said. "At that point, your common sense kind of kicks in."

The Arkansas and Tennessee transportation departments immediately broadcast the closure of the six-lane bridge via social media, news releases and automated highway message boards to try to direct traffic away from the bridge.

The Arkansas Department of Transportation was working Tuesday evening to clear out the buildup of eastbound traffic headed toward the bridge, providing some drivers and passengers with water and snacks, Parker said.

"As soon as we got word of what was going on, we put the word out as quickly as we could, but people [were already] out," he said. "People got caught in the backup, so what we're trying to do now is help them and get them turned around. Cars were being directed and the outside lane was able to turn around and loop back to the next exit, [but] getting the 18-wheelers is going to take a little more time."

The 19,535-foot I-40 bridge between Memphis and West Memphis is a key link in one of the country's most vital logistics and defense corridors, carrying much of the United States' east-west trucking traffic.

Of the 41,000 vehicles that cross the Mississippi on I-40, about 29% are trucks, according to the Arkansas Department of Transportation's latest available data from 2019.

Arkansas State Police spokesman Bill Sadler said state troopers "did provide minimal assistance to Tennessee Department of Transportation authorities who made a request to reroute some traffic." State police otherwise had nothing to do with the bridge closure, Sadler said.

West Memphis police could not be reached for comment.

All emergency response vehicles in Crittenden County have been directed to the I-55 bridge if they have to cross the river, county 911 Director Ronnie Sturch said.

Besides I-40 and I-55 into Memphis, the nearest bridges across the Mississippi River are Arkansas 49 through Helena-West Helena -- about a 75-mile drive south -- and Interstate 155 through Caruthersville, Mo. -- about a 90-mile drive north.

The I-40 bridge was briefly shut down in 2007 after an inspection detected a slight shift in a pier on an approach to the main span. That closure lasted only about nine hours, but caused significant delays.

The bridge first opened in 1973, and the two arches resemble the letter M for Memphis. The structure is named after 16th-century Spanish explorer Hernando de Soto, who led an expedition of the first Europeans to see the Mississippi River.

Information for this article was contributed by Noel Oman and William Sanders of the Arkansas Democrat-Gazette.