National experts to be brought in for I-40 bridge repair 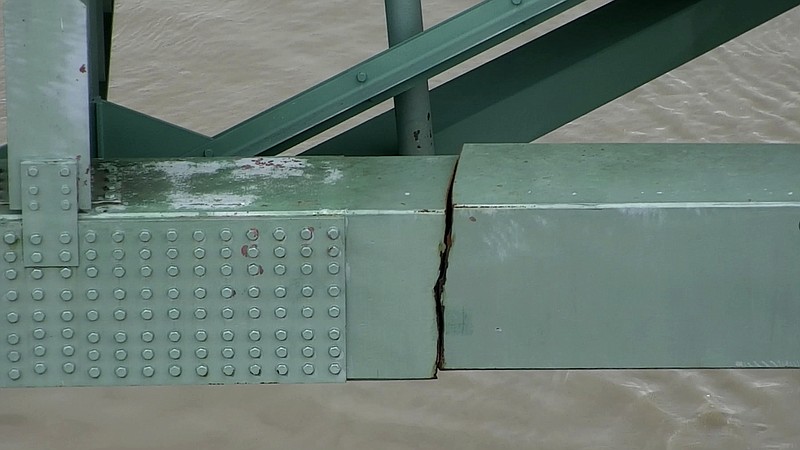 A fracture in a steel beam of the Interstate 40 bridge near Memphis is visible in this undated image. The Tennessee Department of Transportation says the fracture is in a 900-foot steel beam that provides stability for the Interstate 40 bridge that connects Arkansas and Tennessee over the Mississippi River. The bridge was closed Tuesday, May 11, 2021 after inspectors found the crack. (Tennessee Department of Transportation via AP)

State highway engineers on the Arkansas and and Tennessee sides of the Mississippi River say they have summoned national experts in bridge repair to speed up re-opening the Interstate 40 bridge over the river at Memphis as quickly and as safely as possible.

[THURSDAY UPDATE: No vehicles allowed on, no barges below after inspection finds 'significant' break » arkansasonline.com/513span]

One day after a routine inspection detected a fracture in one of four 900-foot beams supporting two bridge spans near the Tennessee side of the river prompted an emergency shutdown of the major river crossing for truck traffic in the nation's mid-section, state highway officials said it remains too early to say when barge traffic could resume on the river, never mind traffic on the bridge, which carries more than 40,000 vehicles daily, a third of them trucks.

"It is a significant fracture in a steel beam that is [central] to the integrity of the bridge," said Lorie Tudor, the director of the Arkansas Department of Transportation, at a noon-time briefing in Little Rock to discuss the steps being taken to identify how to repair the 50-year-old bridge.

MEMPHIS — The Interstate 40 bridge connecting West Memphis and Memphis remained closed Wednesday after inspectors found a crack in the span a day earlier.

The bridge was shut down Tuesday afternoon after the crack was discovered during a routine inspection, the Arkansas Department of Transportation said.

The department said it was working with the Tennessee Department of Transportation to ensure the 48-year-old, 1.8-mile bridge is safe before reopening.

Traffic was being rerouted to the 71-year-old Memphis & Arkansas Bridge that carries Interstate 55 into Memphis, about 3 miles south of the I-40 span. River traffic was also shut down until further notice, the Tennessee Department of Transportation said.

Road traffic appeared on Tennessee Department of Transportation cameras to be moving steadily on the I-55 bridge on Wednesday morning.

In an inspection for the 2020 National Bridge Inventory report, the Federal Highway Administration said the I-40 bridge checked out in fair condition overall, with all primary structure elements sound and only some minor cracks and chips in the overall structure. Its structural evaluation checked out "somewhat better than minimum adequacy to tolerate being left in place as is."

This story has been updated. It was originally published at 10:05 a.m.