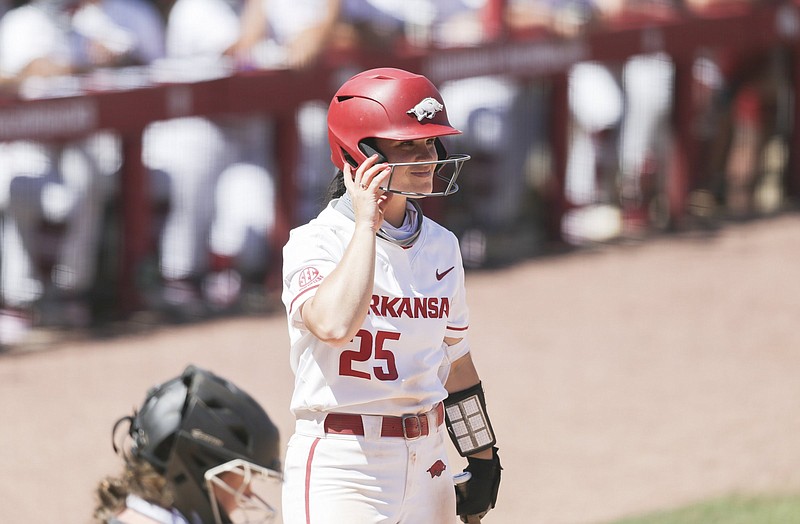 FAYETTEVILLE -- After the University of Arkansas softball team shared the SEC regular-season title, the No. 6 Razorbacks kicked off the postseason with a haul of honors announced by the league office Tuesday.

Courtney Deifel was named SEC coach of the year, and pitcher Mary Haff was tabbed as co-pitcher of the year.

The five selections on the first and second teams are the most in a single season in program history.

Deifel led the Razorbacks (40-8) to a share of their first SEC regular-season crown and their highest national ranking in school history.

Arkansas finished 1-23 in the SEC during her first season in Fayetteville in 2016. The 19-5 league mark this season tied a school record tied a school-record for conference victories, but the Razorbacks' 19 wins in 2000 came in 30 league games.

Deifel deflected the credit to her staff and players.

"I took it upon myself to change the name of the award to coaching staff of the year," Deifel said. "I don't talk about them enough. I'm just fortunate to have a staff that's really bought in. They are some of the best workers. They know the game really well, obviously. They are incredibly loyal. They make me better.

"I just think it's a reflection of our team. Again, like every other award, it's because our team performed at a really high level in a really tough conference. They've been able to put together a really special year thus far, and we really do feel like we're just getting started."

She becomes the second Arkansas coach to earn the SEC honor, joining Carrie Dever-Boaz, who won it in 1999.

Haff, a junior, has been a workhorse for the Razorbacks, finishing the regular season 23-5 with a 1.61 ERA and 170 innings pitched. She's been among the nation's leaders in wins and innings pitched all season and is the first Razorback to earn SEC pitcher of the year. She shared the honor with Alabama's Montana Fouts.

The right-hander from Winter Haven, Fla. said the team has put in a tremendous amount of work and the honors are some validation of that effort.

"This is a testament to all the hard work that we've been doing," said Haff, who earned All-SEC second-team honors in 2018. "I'm so excited for Coach Deifel. She 100 percent deserves it. She is an amazing coach, also human being."

"I think the whole year we've kinda been underestimated and Coach Deifel and our whole coaching staff has done a great job on coaching us through it and letting us control our emotions through this year."

Haff led the league in appearances (35) and is tied for the league lead in wins, ranks second in innings pitched, not to mention top five in strikeouts (175) and top 10 in ERA. In addition, Haff's five saves is third in the league.

"Anytime somebody in the circle is recognized, it means the rest of the circle has been doing their job," Deifel said about Haff's award. "It's an individual award, but it reflects what the team is doing. It's just really exciting to get to share that time together and celebrate."

Burnside's 24 home runs smashed the single-season school record of 17 and ranks second in the nation. The Paragould native and Haff became Arkansas' third and fourth first-team All-SEC selections. They join McEwen (2019) and Devon Wallace (2012) in that select group.

McEwen, a junior, and Storms, a senior, are both three-time All-SEC honorees. McEwen is tied with Burnside for a team-best .497 on-base percentage, which is tied for seventh in the SEC.

Gibson leads the team with a .369 batting average to go with 15 home runs. She's tied for a team-best 51 RBI. The junior and Burnside are one behind Kentucky's Erin Coffell for tops in the SEC in that category. Gibson's 16 doubles also are tied for the most in the SEC.

Arkansas, the No. 2 seed, earned a double bye to the SEC Tournament quarterfinals and will open play at 4:05 p.m. on Thursday against the Texas A&M-Tennessee winner. The game will be broadcast on the SEC Network.