Governor clears kids 12-up to get vaccine 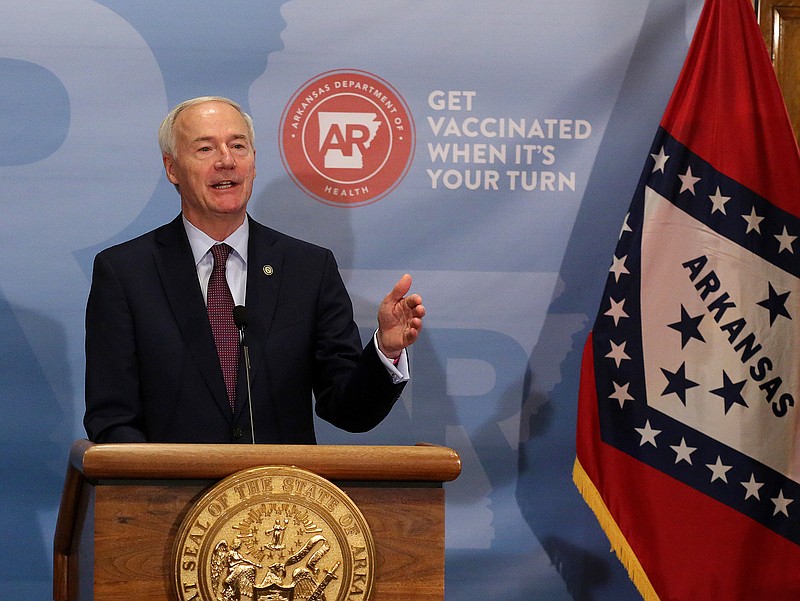 Gov. Asa Hutchinson announced Tuesday that Arkansans age 12-15 had been cleared to receive coronavirus vaccine, although he acknowledged that many health care providers would likely wait until later in the week to begin immunizing that age group.

"This is an important news announcement so that parents can make plans to vaccinate their 12 through 15-year-old" in addition to those 16 and older who became eligible for the shots earlier, Hutchinson said.

Speaking at a state charter school conference in downtown Little Rock, Hutchinson said the expansion would lead to "another surge in vaccination" that would help provide at least one vaccine dose to half of the state's population by the end of July, but "more importantly, help us have a normal year next year."

Although the U.S. Food and Drug Administration on Monday authorized the use of the Pfizer vaccine for children ages 12-15, Arkansas State Epidemiologist Jennifer Dillaha said the state Department of Health will likely wait until the U.S. Centers for Disease Control and Prevention issues recommendations on the matter later this week before it begins administering shots to children in that age group.

The CDC's Advisory Committee on Immunization Practices, led by Arkansas Health Secretary Jose Romero, is expected to submit recommendations to the agency today for approval.

[Video not showing up above? Click here to watch » https://www.youtube.com/watch?v=pgc_BeCZWPc]

Gary Wheeler, president of the Arkansas chapter of the American Academy of Pediatrics, said most of the state's pediatricians will likely also wait for the CDC recommendations as they have traditionally done in similar situations.

The national pediatrician group is also expected to issue recommendations on the issue.

"I will say that pediatricians have been begging to get access to vaccines to immunize their patients for quite some time, and not just their patients, but adults, staff and other people that they have access to," Wheeler said.

"The reason for that is that pediatricians have spent all their entire careers giving vaccine. It's probably the most important activity that we're engaged in. We know how to do it, we know how to do it with scale, and we've been eager to get the green light to do it."

Hutchinson said people who want to schedule the shots can call a Health Department hot line at (800) 985-6030.

"Many will wait until we get the CDC final guidance, but you can call and make the appointment anticipating that that guidance will be forthcoming, and there will be some that will be ready to give that very quickly," Hutchinson said.

At the charter school conference, the Republican governor also urged attendees to get vaccinated themselves.

He referred to an assertion by the U.S. National Institute of Allergy and Infectious Diseases Director Anthony Fauci that restrictions could be relaxed, and another surge in cases could be avoided if everyone gets vaccinated.

"I'm going to take an opportunity through this pulpit here to encourage each of you, first of all as leaders and administrators, get vaccinated, set the right example for the teachers with your team," Hutchinson said.

"We do not have mandates, but we have urgent need, and that is for everyone to get vaccinated."

The audience didn't react to the news of 12- to 15-year-olds becoming eligible for the vaccine, though Hutchinson's mention of his decision last week to stop passing along $300 weekly supplemental federal benefits to the state's unemployed was met with applause.

Meanwhile, Arkansas' count of coronavirus cases rose Tuesday by 233 -- a larger increase than the one the day before but smaller than the one a week earlier.

After rising by three Monday, the number of Arkansans hospitalized with covid-19 remained at 169.

The state's death toll from the virus, as tracked by the Department of Health, rose by six, to 5,770.

Dillaha said state health officials are waiting for the CDC committee to address "some unanswered questions" about giving the shots to children ages 12-15.

For instance, she said the CDC has previously recommended waiting at least two weeks after giving another type of vaccine, such as a flu shot, before giving someone a coronavirus vaccine.

"These adolescents receive routine vaccinations, so we're waiting to understand from the CDC whether they will recommend the two-week waiting period or not," Dillaha said.

She said the department also needs to update its fact sheets, and screening and consent forms before administering the shots to the newly eligible age group.

Retired Arkansas Air National Guard Col. Robert Ator, who is coordinating the state's vaccination efforts, said about 160,000 children in the state are in the newly eligible age group.

In preparation for the CDC's recommendations, he said, National Guard members have been moving Pfizer vaccine to Health Department local health units to ensure that it's available in every county. The Guard teams moved about 6,300 doses Tuesday, he said.

By the end of the week, Ator said he expects the vaccine to be available in 375 locations around the state.

The other two vaccines, from Moderna and Johnson & Johnson, are authorized to be administered only to people 18 and older.

Ator, the Arkansas Economic Development Commission's director of military affairs, said the state is also working to set up vaccination clinics at schools and sports camps, and provide it to pediatrician's offices. The shots could also be offered at other types of summer camps, he said.

"Everything's on the table," Ator said. "We want to make sure that every Arkansan has the opportunity to get a vaccine."

Distributing the Pfizer vaccine to rural areas and small clinics has posed challenges because it comes in minimum shipment sizes of 1,170 doses and, for maximum shelf life, must be stored in special freezers at minus-94 degrees Fahrenheit.

The vaccine can also be stored in a regular freezer for up to two weeks or in a refrigerator for five days, Dillaha said.

Since most pediatric clinics don't have ultra-cold freezers, Wheeler said the clinics will be receiving shipments from pharmacies and hospitals under a "hub and spoke" model.

Because they administer childhood vaccines, the clinics have systems to track what shots their patients have received and when they're due for them, and they'll be reaching out to their patients to schedule appointments, he said.

Patients and their parents are "going to talk to their doctors who are the same doctors that have given them all their other vaccines that all have risks and all have benefits, and they trust those providers and presumably will equally trust them on this particular vaccine," Wheeler said.

While the risk of severe covid-19 is lower for children than for adults, the risk for children is still "significant" and may be elevated in the cases of new variants that have emerged, Wheeler said.

The vaccinations are also important because children can spread the virus to other people, he said.

As it works to use up its vaccine inventory, Ator said Arkansas will likely not order any more doses of Pfizer or Moderna this week for the third week in a row, but might order additional doses of the single-shot vaccine from Johnson & Johnson.

The state ordered 5,200 doses of Johnson & Johnson for this week after not ordering any the previous week.

Although Hutchinson said Tuesday that the state's "vaccinations have increased over last week," Health Department figures showed that the pace was continuing to slow.

Already at its lowest level since late February, the average number of doses administered each day over a rolling seven-day period, including second doses of the Pfizer and Moderna vaccines' two-dose regimens, fell Tuesday by about 277, to 10,189.

According to the CDC, 1,112,883 Arkansans, or about 36.9% of the state's population, had received at least one vaccine dose as of Tuesday.

Nationally, 46.2% of the population had received at least one dose and 35.1% were fully vaccinated.

Hutchinson this week converted what had been a weekly news conference on the coronavirus to one meant to address a broader range of topics. Tuesday's focused largely on issues related to the pandemic, however.

The governor said he hasn't decided whether to seek legislative approval to extend the state's public health emergency related to the pandemic beyond May 30, which is when it is set to expire.

A law passed during this year's regular legislative session requires such a request to be submitted to the Legislative Council by May 20.

Hutchinson said Tuesday that his decision will depend on factors such as the state's daily case increases, the percentage of tests for the virus that are positive "and whether there's going to be additional action that might be needed pursuant to the emergency."

The state's vaccination efforts will also be a factor, he said.

"The emergency tells people we need to get vaccinated because there's something really serious going on out here, so we want to make sure that whether we have the technical emergency in place or not, that people understand that we're taking it seriously," he said.

Tuesday's increase in cases was smaller by 63 than the one the previous Tuesday.

As a result, the average daily increase in cases over a rolling seven-day period fell by about nine, to 194.

That was the first time the average had dropped below 200 since the week ending May 3.

Compared with a week earlier, the number of people hospitalized in the state with covid-19 was down by 23.

The number of the state's virus patients who were on ventilators, however, rose Tuesday by three, to 44, its highest level since March 20.

Also on Tuesday, the Health Department reported that the number of cases identified as having been caused by more-transmissible or otherwise concerning variants increased over the past week by 15, to 101.

That included an increase from 63 to 71 cases that were found to have been caused by the United Kingdom variant, which is spread more easily as well as causes serious illness more often than the original virus strain.

The number of cases confirmed to have been caused by the variant from Brazil grew from two to seven, while those found to be caused by variants from California grew by two, to 23.

The department also reported one case that was caused by a variant first identified in the United Kingdom and Nigeria in December. Unlike the other variants identified in Arkansas, the CDC classifies the strain, known as B.1.525 as a "variant of interest" rather than a more-worrisome "variant of concern."

Phillips County joined Benton, Lonoke, Miller, Poinsett, Pulaski and Washington counties as counties where five to 20 cases caused by variants of concern or interest have been identified.

The number of counties where between one and four such cases have been found increased from 23 to 25.

Among employees and students at public school districts, the number of active cases fell by 49, to 284, between Thursday and Monday, according to Health Department reports.

The number of schools with at least five such cases fell from 22 as of Thursday to 19.

The Little Rock School District, the state's second-largest by enrollment, tied with the Pea Ridge and Russellville school districts for having the fifth-highest number of active cases, 10.

At colleges and universities, the number of active cases fell by nine, to 73, between Thursday and Monday.

The cases added to Arkansas' tallies Tuesday included 102 that were confirmed through polymerase chain reaction, or PCR, tests.

The other 131 were "probable" cases, which include those identified through less-sensitive antigen tests.

The number of cases that were considered active fell by 10, to 2,043, as recoveries outpaced new cases.

Neither the Health Department nor Department of Corrections reported any new cases among incarcerated people.

Among nursing home and assisted living facility residents, the state's count of virus deaths remained at 2,081.

The number of the state's virus patients who have ever been on a ventilator with covid-19 rose by two, to 1,637.

CORRECTION: Arkansas' increase of 233 coronavirus cases on Tuesday was smaller by 63 than the increase the previous Tuesday. An earlier version of this story incorrectly described the difference between the increases on those two days.