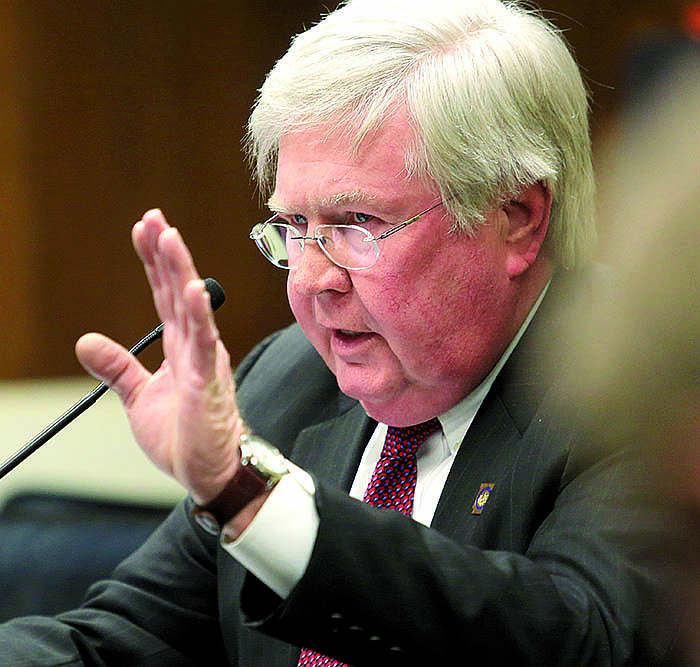 FILE - Prosecuting Attorney Larry Jegley speaks against a bill to allow persons under the age of 18 that were given a life without parole sentence to be eligible for parole after serving 28 years. (Arkansas Democrat-Gazette/Rick McFarland)

Larry Jegley will not seek re-election after eight terms and 24 years as the elected prosecuting attorney for the Little Rock-based judicial circuit, the state's largest district, because of recent health concerns.

Jegley, 68, announced his decision Tuesday, describing his tenure -- a total of 30 years as a prosecutor -- as a "humble honor and privilege." Jegley said he will retire next year when his term expires because of a recent spate of dizzy spells that doctors have not been able to treat.

"For the last several months, I have been experiencing severe vertigo that has not responded to traditional treatments," he wrote in an email. "I have had numerous tests that have not pinpointed the cause and been on several different medications that have not alleviated the problem. While vertigo is not life threatening, due to the seriousness of my condition, it has made my daily life difficult."

Last re-elected in 2018, Jegley has never had an opponent and is the longest-serving elected prosecutor in the 181-year history of the Sixth Judicial District, which encompasses Perry and Pulaski counties.

A potential successor has already stepped forward and more are expected.

Public defender Alicia Walton, 50, is the first to make her intentions public, announcing Tuesday she intends to become the first black lawyer and first woman to serve as the district's elected prosecutor.

Walton is a Marine Corps and Arkansas Army National Guard veteran who said she would bring "a lifetime of service, experience and dedication" to the position. She has set up a campaign website, www.aliciawalton.org, and a Facebook page for her campaign, www.facebook.com/alicia.walton.1460, along with establishing a presence on YouTube, Twitter and Instagram.

Jegley staffs eight circuit courtrooms, including juvenile and drug courts, along with the six district courts in the region with 47 deputy prosecutors, making his office the equivalent of one of the state's largest law firms.

His proteges have gone on to judgeships as well as prosecution careers in other jurisdictions, including the state attorney general's office and the federal government. Other lawyers who have worked for Jegley are now some of the leading lights in private practice in the fields of family law, medical malpractice, criminal defense and election law.

Under Jegley's guidance, his office has successfully prosecuted a self-proclaimed Muslim terrorist who killed a soldier in an ambush, the Marianna man who raped TV anchor Anne Pressly and beat her to death in her own bed, and a Sherwood nurse who smothered her children after trying to poison them.

Jegley joined the prosecutor's office of his predecessor Mark Stodola in 1991 as chief deputy after a legal career that includes a stint as the chief staff attorney for the Arkansas Court of Appeals, a legal adviser to the North Little Rock Police Department, staff attorney for the state Public Service Commission and a law school instructor, among other things.

When Stodola decided to mount what would be an unsuccessful bid for Congress, Jegley was the only candidate to step forward to succeed him in 1996.

"We have committed ourselves as prosecutors to remember that victims of crime and their families deserve our finest efforts," he said 24 years ago, describing himself as "committed to the proposition that prevention is far preferable to incarceration" while promising to be tough on the law-breakers who deserve it.

In the kickoff for his sixth re-election in 2009, the one that would make him one of the state's longest-serving elected prosecutors, Jegley said he took the absence of an opponent to be a sign of the public's trust in him and promised to continue "a "relentless pursuit of justice" without fear or favor.

"I promise to be relentless to find justice on both sides of the equation," he told an audience of about 100. "Truth and justice are the underpinnings of our society."