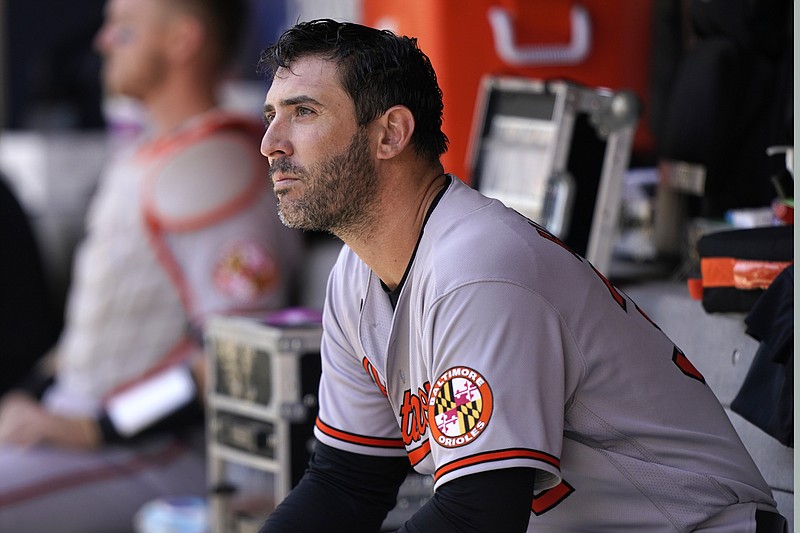 Baltimore Orioles starting pitcher Matt Harvey sits in the dugout during the first inning of a baseball game against the New York Mets, Wednesday, May 12, 2021, in New York. (AP Photo/Kathy Willens)

DETROIT -- Miguel Cabrera drove in two runs and surpassed Omar Vizquel for the most major-league hits by a Venezuelan player, leading the Detroit Tigers past the slumping Kansas City Royals 4-2 on Wednesday night.

"I feel a sense of relief, because people have been waiting for me to break this record for a long time," Cabrera said. "This has been a tough season, but this is a good night."

Cabrera was hitting .098 on May 5, but has six hits in his past four games.

"I have been struggling so much, and I wasn't helping the team win," he said. "I know this team is better when I'm better, and now I feel like I'm helping us win games."

"It's really hard to deal with something like this, especially with the confidence we have in ourselves," starting pitcher Danny Duffy said. "We know we're better than this, but we've lost 10 straight games. There's no escaping that, and the only way to end it is to win."

Casey Mize (2-3) allowed 2 runs on 3 hits and 2 walks in 6 innings. He hit one batter and struck out four. Three Detroit relievers finished, with Gregory Soto pitching the ninth for his fourth save.

MARLINS 3, DIAMONDBACKS 2 Cody Poteet won his major-league debut, Jesus Aguilar homered for a third consecutive game and Miami beat Arizona. The 26-year-old Poteet gave up a run in the first inning and a home run in the fifth. He lasted 5 innings and the right-hander allowed just 4 hits and struck out 6.

METS 7, ORIOLES 1 Matt Harvey was greeted warmly by Mets fans in his return to Citi Field and harshly by New York's hitters as the Mets beat Baltimore. Harvey pitched against his former team for the first time, giving up eight hits, including Kevin Pillar's two-run triple in a three-run second inning.