Gas crunch continues across much of U.S. after pipeline hack 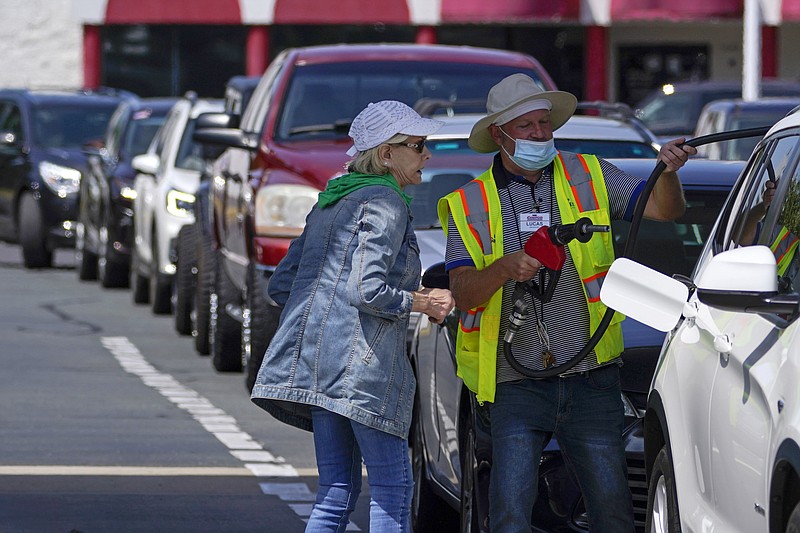 A customer helps pumping gas at Costco, as other wait in line, on Tuesday, May 11, 2021, in Charlotte, N.C. Colonial Pipeline, which delivers about 45% of the fuel consumed on the East Coast, halted operations last week after revealing a cyberattack that it said had affected some of its systems. (AP Photo/Chris Carlson)

CLEMMONS, N.C. -- Gas pumps remained shrouded by plastic bags Thursday at thousands of service stations across more than a dozen U.S. states, despite a pipeline company's claims of "substantial progress" in restarting its supply line.

Nearly 70% of North Carolina's gas stations were still without fuel, as were about half the stations in South Carolina and Georgia, GasBuddy.com reported. Drivers on the East Coast were also having trouble, with more than half the stations tapped out in Virginia and Washington, D.C., the site's tracking service showed.

In a Thursday update, Georgia based-Colonial Pipeline said gasoline delivery is now underway in most of its markets.

The pipeline stretches from Texas to New Jersey, but the northeastern U.S. has seen fewer disruptions since those states are supplied more by other sources such as ocean tankers.

Gas is flowing again across most of the Deep South, and other parts that were offline in the Mid-Atlantic region were expected to become operational later Thursday, the company said.

"We are not out of the woods yet, but the trees are thinning out," Richard Joswick, global head of oil analytics at S&P Global Platts said in an email. He estimates that full recovery for the East Coast and Gulf Coast will take a couple of weeks at least due to lags and limits for all shipping options.

The cybersecurity attack on the Colonial Pipeline forced a temporary shutdown of the nation's largest fuel pipeline, prompting panic buying and long lines that quickly wiped out supplies around the southeastern U.S. The company resumed pipeline operations late Wednesday, but said it would take several days for deliveries to return to normal.

The run on gas had North Carolina tow-truck driver Jonathan King worried about whether he could do his job.

"I drive all over the place," King said at a packed gas station outside Winston-Salem on Wednesday. "It gets really busy. And yeah, with the fuel going the way it's going, it's going to be very hard for us. Hopefully we'll be able to get through it."

The governors of both North Carolina and Virginia declared states of emergency to help ensure access. Other governors urged people not to hoard supplies.

Mary Goldburg, 60, of Norfolk, Virginia, said she needs her car for work but also to see her grandchildren -- whom she barely got to see last year. Her job includes delivering T-shirts for events and other promotional products.

"I can't get paid until my customers get their products," said Goldburg as a slow-operating pump filled her tank for more than 20 minutes at a 7-Eleven.

Restaurants and bars, which are already struggling to fill job openings, will find themselves particularly squeezed, said Robert McNab, an economics professor at Virginia's Old Dominion University. Some customers may abandon plans to eat out.

"In all likelihood, these service workers will be impacted most significantly, with rising fuel and food prices eating a larger part of their household budgets and income being reduced this month by the fear-induced shortage of gasoline," McNab said.

The Colonial Pipeline delivers about 45% of the fuel consumed on the East Coast. There is no gasoline shortage, according to government officials and energy analysts, just delays in delivering the fuel from Gulf Coast refineries.

The distribution problems have been fraying nerves.

Two people were charged with assault after spitting in each other's faces over spots in a line at a Marathon station in Knightdale, outside Raleigh, on Tuesday afternoon, authorities said.

In Walton County, Georgia, paramedic Jeff Lisle had just under a quarter-tank of gas in his Jeep and found a small amount in the cans he uses for his lawnmower in case he needed the extra boost to get to work.

As for the ambulances he works in, "we have to buy fuel at gas stations like everybody else does," he said. Whenever possible, the ambulances have been stopping to refuel when they're lucky enough to drive past a station with gas.

The shutdown even affected hikers long the Appalachian Trail, which stretches from Georgia to Maine. They depend on cars and vans to access the trail and get supplies.

"Everybody's out here buying from the same gas pumps, so the lines are long, some are out -- you've really got to look for it," said Ron Brown, who operates Ron's Appalachian Trail Shuttles, which takes hikers from Atlanta's airport into the north Georgia mountains.

But he said that hikers are resourceful enough to get where they need to go.

"It will get rectified because it's a big deal, and everybody needs gas," he said. "We'll just make due until it does."