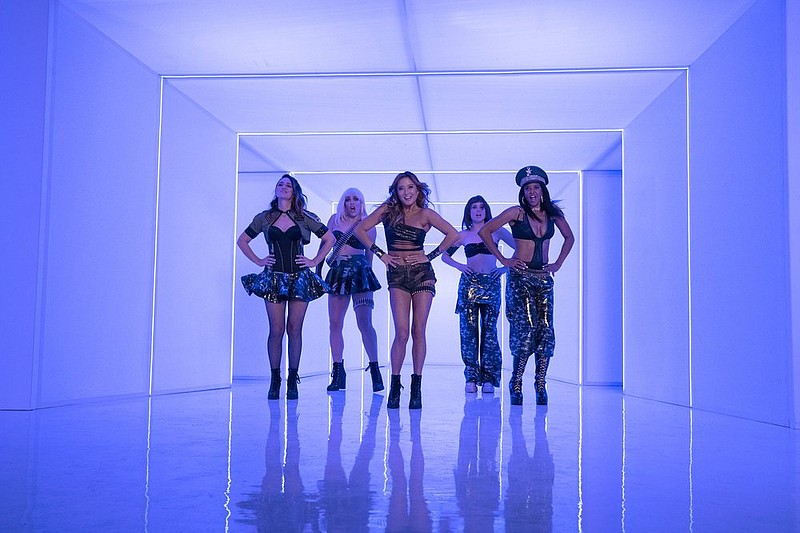 The catchy, syrupy-sweet tunes from the female pop stars of the late '90s and early '00s were once described by some as a major step toward female empowerment: Britney Spears showing the world how a young woman could own her sexuality or the Spice Girls championing the power of female friendship.

But in retrospect, these acts' shiny surfaces can also read as a slick repackaging of sexist tropes. And the ongoing reconsideration of American culture from that era, which has included everyone from Spears to Monica Lewinsky, is allowing those who lived through the years of overplucked eyebrows, low-rise jeans and Destiny's Child to look at it again, even as Gen Z delights in experiencing those bygone trends for the first time.

Bring in "Girls5eva," the new Peacock comedy from executive producers Tina Fey and Robert Carlock. The series follows the titular girl group, which years ago shot to stardom and then quickly faded into obscurity, when its members seize the spotlight once more after being sampled on a trap artist's new single.

The show jumps back and forth in time, juxtaposing the present with the group's music videos, grainy camcorder footage and "Total Request Live" appearances of yore: We see Y2K through 2021 eyes, as the women — now in their 40s — grapple with the questionable artistic choices they made, often with less autonomy than they first thought.

"Have you ever wanted the perfect girl to fit in your world?" croons Gloria, played by former "Saturday Night Live" head writer Paula Pell, in the song "Dream Girlfriend." "Well, don't make a wish, because we're already real."

This ridiculous anthem of male fantasy, which launches into more pointed satire about whale-tail thongs and stylish birth control, might sound like a stretch, but the show makes a point that it's only a stone's throw from real-life examples like "I'm a Slave 4 U" and "Cater 2 U."

"Everything is an amalgamation of [turn-of-the-millennium pop music]. It's Spice Girls, it's Destiny's Child, En Vogue, Britney Spears. It's kind of like a pastiche of a kind of genre that I think is even wider than what Girls5eva were doing," Sara Bareilles, who plays the group's "chill" member, said via video conference. (Even this is a reference to that moment in music history: Jeff Richmond, the show's executive producer and composer, noted how group members of the era were branded to fit different personality types so fans could be a "Posh Spice" or "Sporty Spice" kind of girl.)

In borrowing so much from that period, the team behind "Girls5eva" (so named because "4 eva's 2 short") has tried to ensure, through meticulous research, that any exaggerations depicted in the show are rooted in reality.

"The writers and I kind of bought every book that was written. We have one from, like, Beyoncé Knowles' father; everyone who wrote a book in the late '90s about that era," said showrunner Meredith Scardino. Other reference materials include the TV series "Making the Band" and the Lou Pearlman documentary "The Boy Band Con."

It also helped that the show is about an era the writers and actors remember vividly, Scardino added. "When I was thinking about developing the show, the girl group idea kind of popped in my head as a cool way to be able to talk about being a woman in her 40s now and also look back at when I came of age," she said.

The show's riffs on the music industry certainly passed the test for the musicians on set. The third episode, in which Stephen Colbert plays an inscrutable but revered pop songwriter named Alf Musik, finds the group's members in an uncomfortable spot when they're compelled to turn down an awful song Musik has written for them.

"I've been in those rooms with the producer who has a bad idea, and it's sort of like the push-and-pull of wanting to be amenable, but also checking in with, 'Is this a good idea? Should we say these things on the microphone? Probably not,'" Bareilles said.

"A lot of [these groups] are just kind of churned out by a factory and just handed a song and didn't really have a voice in the equation," said Scardino. Girls5eva's "Dream Girlfriend," crafted in much the same fashion, is about "being the ideal woman, but for a certain kind of man — like it was clearly not written by them."

Another nod from the show to the girl group industry is that many weren't formed from friendship but from money and circumstance. The show's biting lyrics work, Richmond said, to shed light "on the music industry, how it operated, and how misogynistic it was to have a girl group that was created by men and written by men." ("We've been best friends ever since we auditioned for a man in a motel in New Jersey," says Wickie Roy, the superstar of the group, played by "Hamilton's" Renée Elise Goldsberry.)

But while "Girls5eva" sharpens its comic knives for the ways in which pop culture exploits young women and then quickly casts them off — "For ladies, 35 is checkout time," says the group's manager, played by Jonathan Hadary — Scardino said the series is rooted in affection for the girl groups of that era. "We have nothing but love for every pop star that's out there and went through this."

And in our own nostalgia-obsessed culture, it's not even a stretch for Girls5eva to get back together in hopes of making it big — on its own terms, a second time around. After all, the Spice Girls are teasing a reunion tour later this year.