I-40 span has 'significant' break 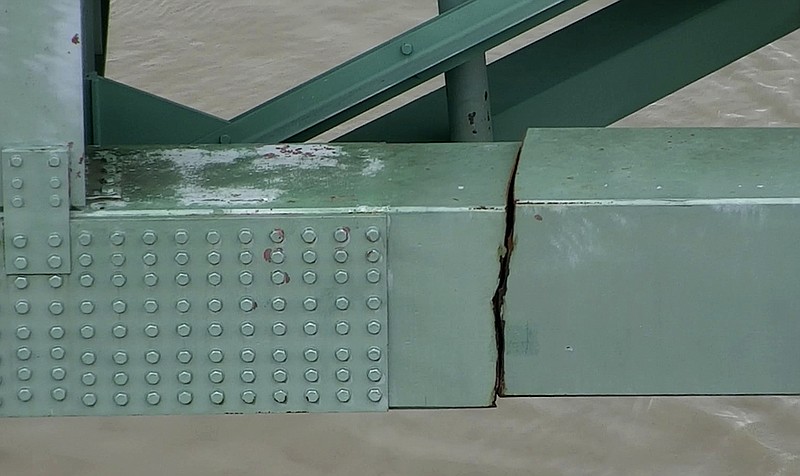 State highway engineers on the Arkansas and Tennessee sides of the Mississippi River say they have summoned national experts in bridge repair to speed up reopening the Interstate 40 bridge over the river at Memphis as quickly and as safely as possible, an effort they concede might require weeks if not months.

An annual inspection that is required because of the lack of redundancy in the bridge's design and construction led to the discovery Tuesday afternoon of a significant fracture in one of the four 900-foot beams supporting two of the bridge spans near the Tennessee side of the river.

The discovery prompted an immediate shutdown of a major river crossing for truck traffic in the nation's midsection. The bridge carries more than 40,000 vehicles daily, a third of them heavy trucks.

A day later state highway officials on both sides of the river said it remained too early to say when barge traffic could resume on the river.

Vehicle traffic crossing the river at Memphis is now using the Interstate 55 bridge.

"It is a significant fracture in a steel beam that is [central] to the integrity of the bridge," Lorie Tudor, the director of the Arkansas Department of Transportation, said at a noontime briefing in Little Rock held to clarify the steps being taken to repair the 48-year-old bridge.

She called the bridge inspection team from Michael Baker International, working under a department contract, "heroes" for discovering the crack on the first day of an annual inspection Tuesday afternoon and immediately notifying emergency personnel.

"This fracture had the potential of becoming a catastrophic event that was prevented by our staff's diligent effort in managing our bridge inspection program," Tudor said, noting that the agency's 27 bridge inspection teams and outside inspectors completed 10,000 inspections last year.

The bridge remained closed Wednesday until further notice to river traffic underneath and vehicular traffic on it, with immediate prospects of reopening increasingly doubtful.

"This is a major, major event," said Shannon Newton, president of the Arkansas Trucking Association, who added that she no longer is counting on a short-term fix.

"I thought perhaps there was a possibility that it might be open to weight-restricted or certain lanes or maybe some sort of lower volume traffic, which would be a relief as opposed to the whole thing being shut down," she said. "After seeing the photos and talking to some other folks ... my hopes for that are grim."

Tudor's briefing took place just after Tennessee Department of Transportation officials held their own briefing on the other side of the river. Officials from both departments said it was too early to answer many of the questions.

One big question is whether the bridge has been compromised to the point it cannot support itself, said Paul Degges, chief engineer for Tennessee's transportation department. Until that is known, barge traffic on the Mississippi River at Memphis will remain shut down.

Calculations needed to answer that question will take a day or two, Degges said.

The next calculation is to determine what kind of load it can shoulder beyond supporting itself, he said. It carried six lanes of traffic until Tuesday afternoon. Now engineers don't even know if it is safe for an inspection team or construction crews to be on the bridge.

That calculation will take even longer, Degges said.

The bridge was last inspected in September. The fracture wasn't present then, and the bridge was in fair, if not good, condition and didn't carry a structural deficient rating on any its major elements, officials said.

But in addition to its age, the bridge is automatically under heightened scrutiny because it is a "fracture-critical bridge" and must be inspected every year, Arkansas officials said Tuesday. Most bridges are inspected every two years.

A "fracture critical bridge" has, according to the American Association of State Highway and Transportation officials, "fracture critical members ... items defined as steel primary members, or portions thereof, subject to tension whose failure would probably cause a portion of or the entire bridge to collapse."

Redundancy in bridge design and construction, industry experts say, refers to the capability of the bridge to carry a load after damage to or failure of one of its systems.

"The real danger comes when a bridge is both structurally deficient and contains a component that is fracture critical," said Ryan Zamarripa, writing in a 2019 memo titled "Fix the Damn Bridges" for Third Way, which styles itself as a centrist think tank.

One such bridge that was both fracture critical and structurally deficient was the Interstate 35W bridge in Minneapolis. That bridge, which also crosses the Mississippi River, collapsed without warning during rush-hour traffic on Aug. 1, 2007, sending dozens of vehicles plummeting into the river. Thirteen people died, and another 145 were hurt.

The nation has 5,000 bridges classified as both fracture critical and structurally deficient, according to Zamarripa, citing figures from the Federal Highway Administration. Of those, 90 are in Arkansas, he reported.

Also hamstringing engineers to some extent is that the bridge is likely the only one of its kind at least on the Arkansas side of the Mississippi River. It opened in 1973. Rex Vines, the deputy director and chief engineer for the Arkansas Transportation Department, said he couldn't say why.

The cause of the fracture is likely the bridge's age and the years of constant traffic on its deck.

"It is a fatigue-type fracture, and this bridge is nearly 50 years old," Tudor said. "The constant movement that happens as traffic goes across the bridge is just like, say, a paper clip ... the more you move it and finally it breaks. It's something similar to that."

The engineers in Arkansas and Tennessee indicated confidence that the bridge can be repaired, though it likely will be a challenge.

"Even simple solutions such as welding a repair into place is more complicated with this bridge due to its size and that it's over water," said Steve Frisbee, deputy engineer for operations at the Arkansas Transportation Department.

Tennessee already is taking steps under emergency powers to hire a contractor to make repairs to the bridge, which is named after Hernando de Soto, the Spanish explorer who was the first European to see the Mississippi River.

So far, people are showing patience about the closing of the bridge, according to West Memphis Mayor Marco McClendan. West Memphis, a city of 24,000 people, is on the Arkansas side of the river and serves as a bedroom community to Memphis.

"The Hernando de Soto Bridge is an essential component not only to the city of West Memphis, but to the transportation network that keeps freight, emergency vehicles, and transit moving throughout the country," McClendan said in an email. "The closure has been a challenge for those who rely on I-40 to commute to work, school, medical services, and many other daily needs.

"At this time, residents, workers and businesses have mainly been inconvenienced by the I-55 detour. All emergency services are functioning as usual and our contingency plans are in place to facilitate those transfers."

The I-55 bridge was built in 1949 and also is inspected annually, Arkansas transportation officials said. It was last inspected in August.

"Just out of precaution, we're taking a look at it again," one official said.

Both bridges are a shared responsibility of the Arkansas and Tennessee transportation departments.

Newton, the trucking association president, said members of her organization's board attending its monthly meeting Wednesday expressed worry about the bridge closing, noting that trucks already have seen delays of 60 minutes to 90 minutes crossing the river using I-55, which is the only river-crossing option in the Memphis area right now.

"It's fortunate this fracture was discovered during a routine inspection and not as part of an investigation following a catastrophic incident," she said in a statement. "However, it doesn't change the fact that this closure will have a significant ripple effect on the already strained supply chain.

"Between increased consumer demand, the driver shortage and now a major bottleneck in Memphis, shippers and consumers across the country should be prepared for longer shipping times until the I-40 Hernando de Soto Bridge is re-opened."

About 125 miles west of the Hernando de Soto Bridge, truckers fueling at the Pilot Travel Center just off I-40 in North Little Rock prepared for their rerouted journey toward Memphis.

Whether it was because they had already anticipated delays or were unaware of the bridge's closure, some truck drivers were not fazed by the situation.

Ray, who was headed back to Memphis, said his early commute time and the closure of a weigh station at I-55 helped lessen traffic on the highway.

"If that weigh station was open, it would have backed traffic even further, so by it being closed it helped us out," Ray said.

Joe Meraz, who was headed to Memphis, said he didn't know about the I-40 bridge closure.

While truck drivers often use their radios to communicate with one another about road conditions, Meraz said he relies on the two GPS devices he takes with him to update him on what's ahead.

"The phone basically knows what's going on," he said.

Meraz said he isn't worried about delays on his way to Memphis, adding that he had a lot of leeway to get to his destination.

For other truckers, the effects of the bridge's closure were more substantial.

For Ernest, traffic between North Little Rock and West Memphis on I-40 "is the worst pain in the ass that you ever want to know" because of the traffic from Texas and Oklahoma traveling east.

"Now I got to leave early and hope I have no trouble between here and there," he said.

State transportation department officials want to get the bridge reopened, but it isn't their top priority, Tudor said.

"Our primary goal is the safety of the road users and our secondary goal is to reopen the bridge to traffic as soon as we can safely do so," she said. 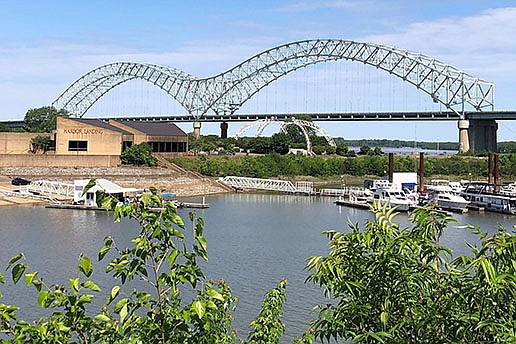 The Interstate 40 bridge that connects Arkansas and Tennessee, shown Wednesday, remains closed as officials await national experts in bridge repair. Meanwhile, barge traffic on that section of the Mississippi River has also been shut down for safety reasons. (AP/Adrian Sainz) 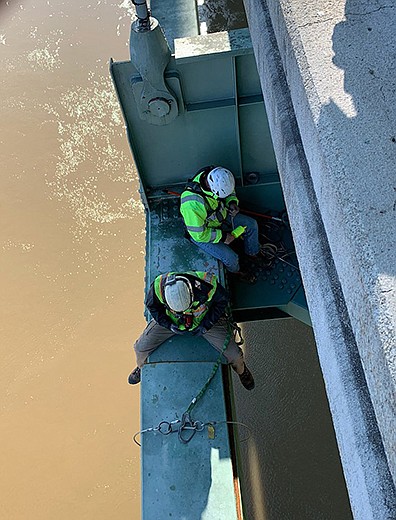 Workers from the Arkansas and Tennessee transportation departments inspect the cracked beam Wednesday on the Interstate 40 Mississippi River bridge between West Memphis and Memphis. The break is just in front of the worker straddling the beam. (Special to the Arkansas Democrat-Gazette) 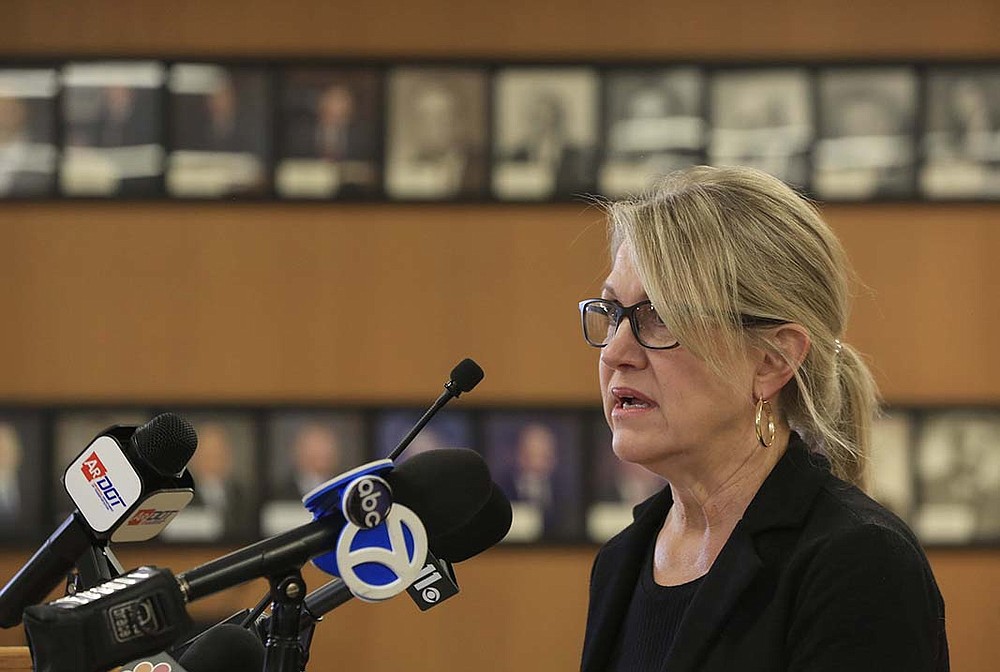 “This fracture had the potential of becoming a catastrophic event that was prevented by our staff’s diligent effort in managing our bridge inspection program,” Lorie Tudor, director of the Arkansas Department of Transportation, said Wednesday at a briefing in Little Rock. (Arkansas Democrat-Gazette/Staton Breidenthal)
ADVERTISEMENT