OPINION | TAKEOUT TASTINGS: Off the curb 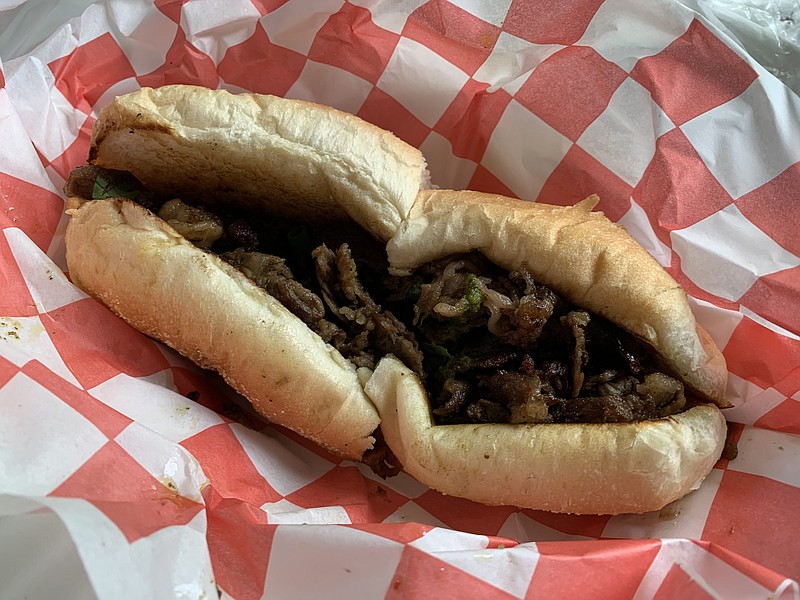 You might say the continuing proliferation of food trucks has provided "lots" of opportunity for dining on the go.

This week's choices are all from food trucks. Since there are very few, if any, food truck chains operating around here, that made it easy to stick to our "buy local" policy; we were lucky to find food trucks within our hot-food-hot comfort zone; and we paid for all our meals up front.

WHAT WE GOT: Argentinian Steak Sandwich ($10); combo, $2 extra, included house-made chips and a 22-ounce drink.

We've been interested in this operation since we first reported it was opening in January, but since it has mostly been plying locations in Benton, Bryant and southwest Little Rock, we hadn't had the opportunity to track it down until a couple of weeks ago, when the truck parked at Simmons Bank Arena in North Little Rock. We'd say our visit fulfilled the promise chef Serge Krikorian, owner of Vibrant Occasions Catering and Dinner's Ready Express Catering, makes on the website of "delicious chef-prepared fusion cuisine made with the freshest available ingredients."

Our sandwich featured shaved Black Angus prime strip steak, chopped on the grill (as steak sandwich steak should be) as it cooked in Krikorian's house-made chimichurri and piled onto a toasted hoagie roll. It was delicious, the chimichurri giving it just the right degree of kick, though it also delivered a bit of an oily feel to the sandwich — and it would have been nice and helpful if we'd been provided with some napkins. We spent an extra $2 for the combo, with a generous portion of separately bagged, house-made potato chips and a 22-ounce plastic bottle of Coca-Cola.

HOW IT WENT: We waited longer to place our order at the food truck window than it took them to produce it out of the window.

HOW IT'S GOING: Fairly early in the arena's Food Truck Friday lunch period, the parking lot where four food trucks parked wasn't too crowded. There were three orders ahead of us and one behind us. 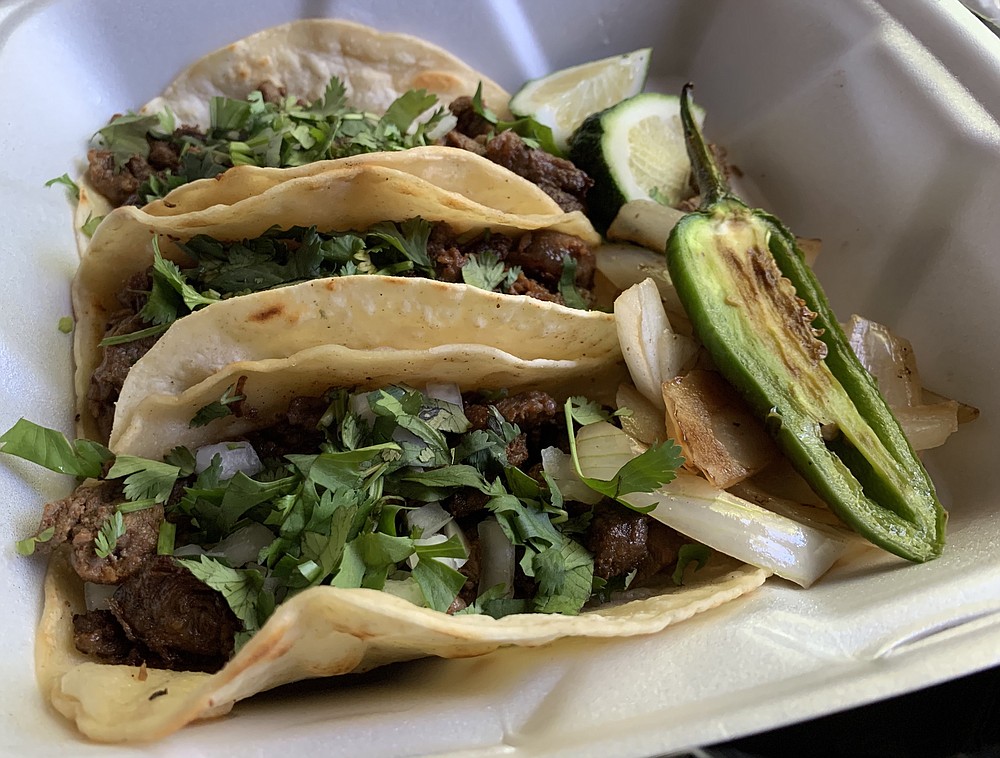 Our three carne asada tacos from Tacos El Gordo needed a little lime juice and some salsa to make up for the onions we asked them to hold back. (Arkansas Democrat-Gazette/Eric E. Harrison)

WHAT WE GOT: Three carne asada tacos ($2 per)

Like most of the street tacos we've encountered lately, these were pleasant but not overly lively until we added some squirts of lime juice and some mild red and green salsas from little plastic cups — none on one taco, red on one taco and green on one taco. The meat was lean — not something you can always count on — and enough spilled out of each single corn tortilla that, had we another tortilla, we could have made a fourth taco. The tacos were topped with cilantro and onions; we asked for, and got, light onions, but we also got, unasked for, a side pile of lightly grilled onions in case we changed our minds.

HOW IT WENT: The menu painted on the truck doesn't reveal much about the total range of options, nor does it include prices. Only after we'd ordered, paid — there's a $1 credit-card fee, by the way — and ate did we visit the truck's Facebook page and see photos of things, recent specials, that we probably should have ordered, including a Burrito El Gordo, Quesabirria tacos and a pizza quesadilla. We waited less than five minutes for our order.

HOW IT'S GOING: One customer ahead of us waited in his car for his order to come out. So did the one customer who arrived after us. 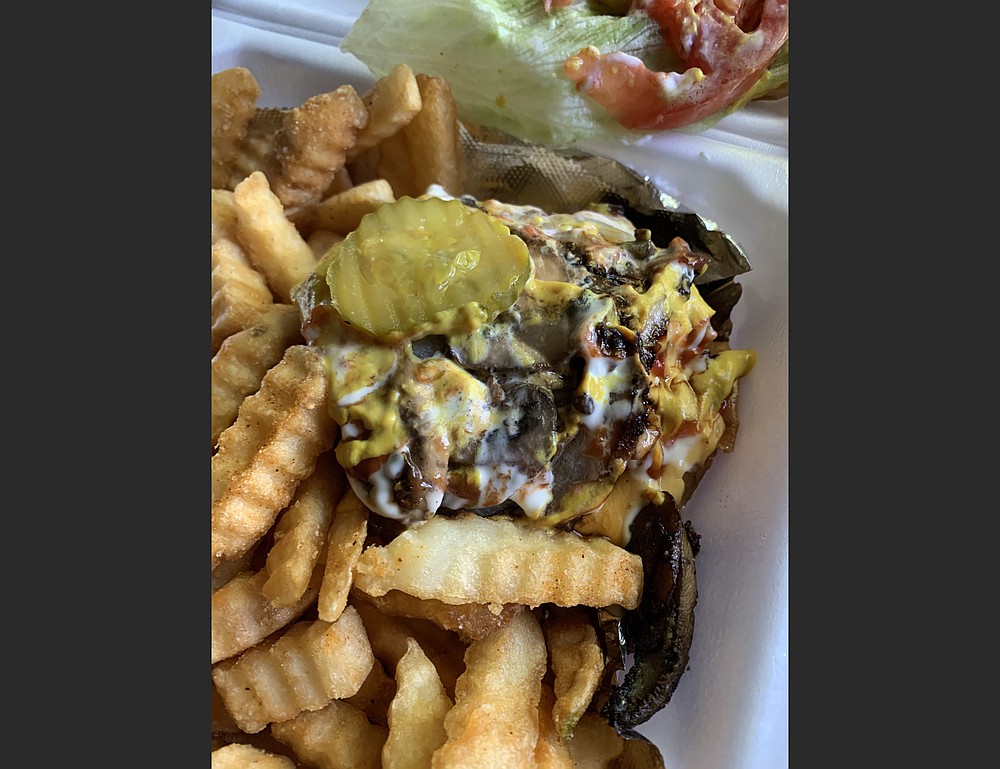 WHAT WE GOT: Ultimate Burger ($15, including fries and a soft drink)

Online versions of Mrs. B's menu include interesting items, including a pork chop sandwich, but mostly what we saw scrawled on the white board on the side of the truck was burgers, especially this Ultimate Burger, with two large patties, cheese, bacon, grilled onions and grilled mushrooms.

When the gentleman who took our order asked it we wanted it with everything — we said yes, because without everything it would only be the Penultimate Burger, right? — we forgot about, since the menu description didn't mention them, the lettuce, tomato, pickles, ketchup, mustard and mayonnaise. The very fresh tomatoes we ate separately; the lettuce we just peeled off. The mayo, something we usually shun on burgers, was drizzled on and so actually wasn't a big deal. Big as this burger is, we managed to eat nearly all of it, along with most of the crisp-exterior and soft-interior crinkle-cut fries.

HOW IT WENT: We were told 15 minutes, but it took just over 20, for our burger to emerge. Luckily, since there was an event at the stadium, we found a place to sit while we waited. 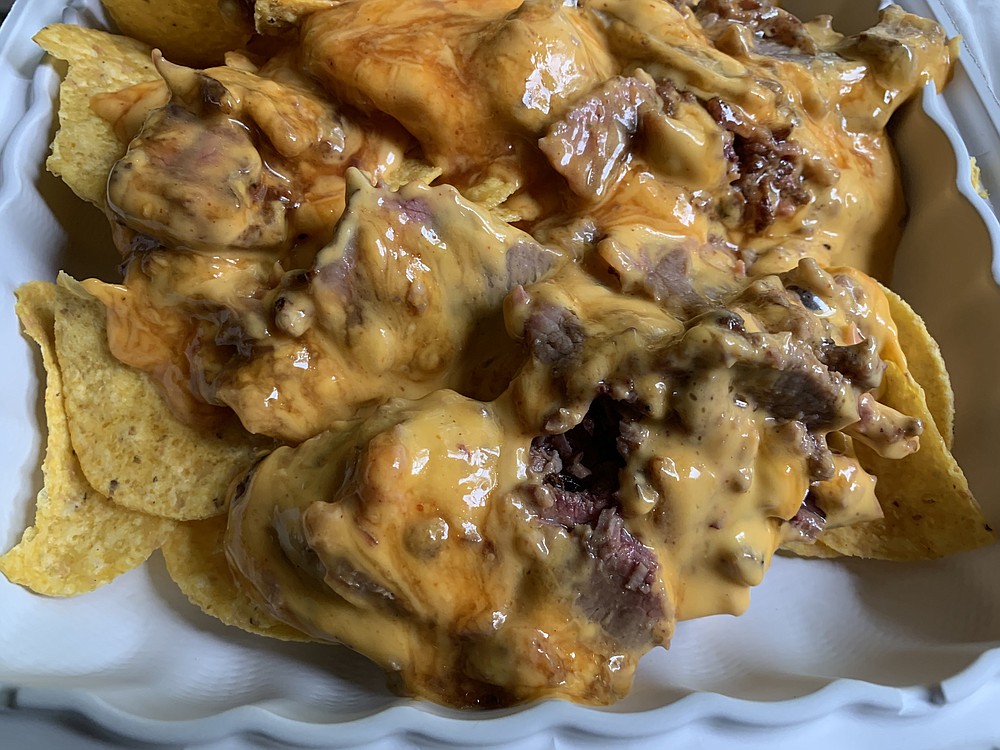 WHAT WE GOT: Brisket & Cheese Nachos with honey sriracha ($9)

This has to be one of the most decadent items we've brought home in this past year of bringing food truck items home — lean brisket cut into square and rectangular slices awash in an ocean of gooey nacho cheese sauce notably enhanced by the honey sriracha that lent the whole mess a distinct sweetness beyond our expectations. Taking the advice of the nice lady who took our order to package our store-bought corn chips separately so they'd be crisp at the end of their journey turned out to be the right choice — we dumped the contents of foam clamshell A onto the chips in foam clamshell B and went to town. For an extra $2 we could have had additional nacho toppings, such as pico de gallo, sour cream and/or guacamole, but we strongly suspect in hindsight that it might have killed us.

HOW IT WENT: At lunch on a weekday, the Rail Yard, which on the weekend is packed to the railings, was practically empty. We waited about 10 minutes for our food.

HOW IT'S GOING: There were no other orders in front of ours, and maybe one behind us. 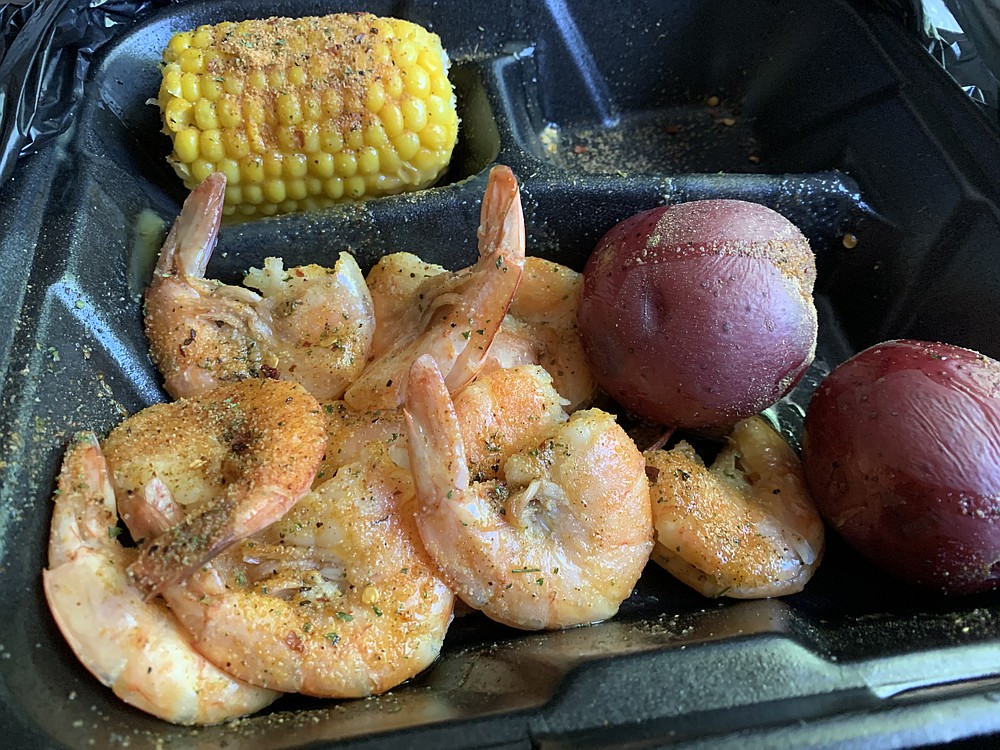 Our $20 Shrimp Boil from The Boil was a decadent, but delicious, expenditure for lunch. (Arkansas Democrat-Gazette/Eric E. Harrison)

Speaking of decadent, that adjective also could apply to spending $20 plus tax and tip on a take-home lunch, but it was worth it. Similar to the burgeoning number of stationary seafood boil places, this food truck offers shrimp, crab leg and sausage boils in a choice of garlic butter or Cajun hot (or a mixture thereof), various combos, and an Alfredo pasta with shrimp. Mindful of having to go back to work afterward, we got our shrimp boil with mild garlic butter — 10 peel-and-eat shrimp, with the shells split to make peeling them considerably easier, which added to the thrill. It came with a seasoning-dusted corn cobette, a small plastic container of extra butter, two small red-jacketed potatoes, but — and the menu proclaimed this specifically — no sausages. Drat.

HOW IT WENT: We were promised a 10-minute wait, and that's how long it took. Not bad for a food truck.

HOW IT'S GOING: There was a handful of customers ahead of us and a few behind us.