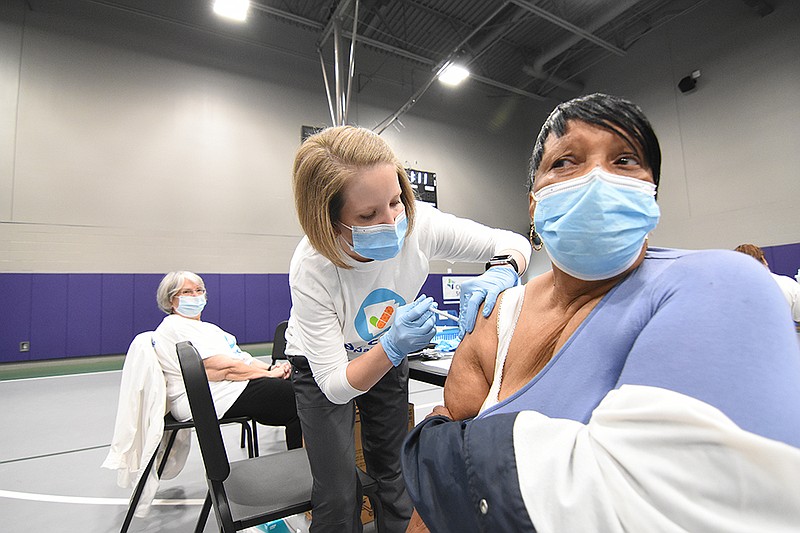 Camille Wilson (left), a registered for CHI St. Vincent, gives Margaret Rincher of Little Rock her first dose of the coronavirus vaccine as Jhonnixy Solis, a volunteer translator, watches Friday, April 23, 2021, at Little Rock Southwest High School. The clinic, hosted by the City of Little Rock, CHI St. Vincent, the Mexican Consulate and the Little Rock School District, focused on the Spanish-speaking members of the community, but was open to anyone eligible to receive the vaccine. See more photos at arkansasonline.com/424vaccine/. (Arkansas Democrat-Gazette/Staci Vandagriff)

The number of Arkansans hospitalized with covid-19 rose Thursday to its highest level in a week, while the state's count of cases rose by 192.

The increase in cases was the first one in three days that was higher than the one a week earlier, although it was only higher by four.

The state's official death toll from the virus since March 2020, as tracked by the Arkansas Department of Health, rose by six, to 5,783.

"Our case numbers and hospitalizations continue to remain at the levels we’ve seen over the past week," Gov. Asa Hutchinson said in a tweet. "We still have work to do on the vaccination front, but we had a good day with an increase of over 10,000 doses administered. I hope you’ll do your part to protect your community."

After remaining at 169 since Monday, the number of people hospitalized in Arkansas with covid-19 rose Thursday by seven to 176.

The number of covid-19 patients who were on ventilators fell for the second consecutive day, dropping from 42 as of Wednesday to 35.

Active cases rose to 2,045, up seven from Wednesday. Active cases have now been above 2,000 for 10 consecutive days after having been below 2,000 for the entire month of April.

After falling for two days, the average number of cases added to the state's tallies over a rolling seven-day period rose slightly, to 184. That was up from this year's low of 151 cases a day during the week ending April 2, but down from the 203 a day that were added the week ending May 6.

Meanwhile, Health Department figures indicated the pace of vaccinations was continuing to slow. During the week ending Thursday, an average of fewer than 9,300 doses a day, including second doses of the Pfizer and Moderna vaccines' two-dose regimens, were administered.