3 films from this year's True/False festival 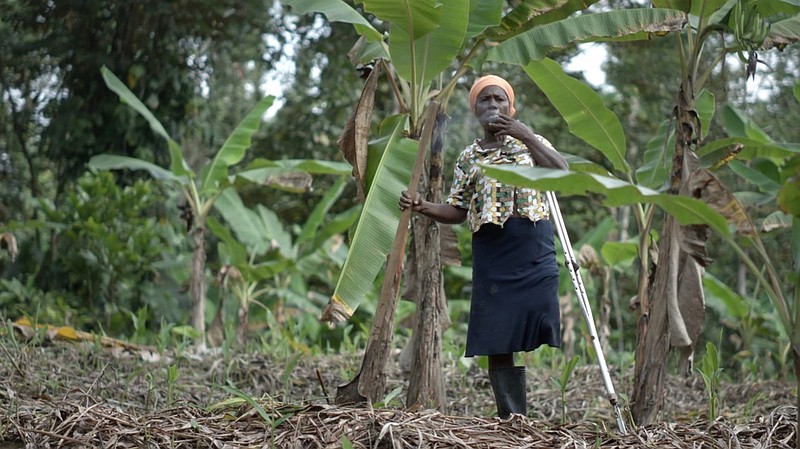 German Adolfo Arango’s documentary “Songs That Flood the River” tells the story of Oneida, an elderly singer of funeral songs from a village in Camaroon that has been tragically abused.

This year, True/False returned as a live festival, but modified and primarily outdoors. For out-of-towners, they offered a virtual version of their offerings, albeit with a limited selection of features and shorts. On the plus side, they thoughtfully included a large to-go box for their "teleporters," filled with native goodies and film-themed treats. Here are the first three entries of the virtual fest, and a sense of the goodies that got sent with them.

"No Kings": Emilia Mello's film begins underwater, her camera meandering over a rocky shore, and through cloudy shoals, fish circling uncertainly past her lens. It's an entirely appropriate image given her subsequent subject matter, which concerns the lifestyle of a Caicara community on the southern Brazilian coast.

Descendents of indigenous natives, European pirates, and escaped African slaves, the Caicara live in remote, secluded villages -- at least those that haven't been pushed off their land by government-backed developers -- utilizing simple techniques, including fashioning their own nets and home-carved canoes, to fish the abundantly populated waters near the coast, and live in relative simplicity. Mello follows several figures in this close-knit village, including a fiery young girl who leads the director into the tidepools nestled between the rocks in order to capture crabs; and an easy-smiling man, who lives "without demons or God" and has settled neatly into his seemingly unencumbered life, after a more tumultuous run in his younger days.

The film works impressionistically, a somewhat meandering collection of snippets with the Caicara villagers living their day-to-day lives, laughing, talking, cavorting on the beach, or picking jackfruit off the trees. What at first seems like a sort of idyllic existence (that is, if you love fish, fishing, and being on the water on a daily basis), however, eventually turns darker, with the loss of habitat of the Caicara people and the abolishment of their villages and way of life, but also from a forlorn villager who tells the story of coming back to his village on a boat after being away for the day, and crying upon spotting his small spat of homeland, as he puts it "the only place he will ever get to see" in his lifetime. The ambiguity adds a needed dash of depth to what is otherwise mainly a travelogue.

Teleported Bonus: Among other things, a good fistful of the sticky, taffy-like candy Zaza, a Brazillian treat.

"The Two Faces of a Bamileke Woman'': When Rosine Mfetgo Mbakam returned to her native Cameroon after living abroad in Europe for seven years to study filmmaking in Belgium, she came back to her mother and extended family having gotten married to a white European man, and with a young son in tow, whom she brought so he could meet his grandmother in person for the first time.

Mbakam sagely keeps her lens focused primarily on her mother, still living in Tonga, where Mbakam and her large contingent of sisters all grew up. Her mother, a no-nonsense woman who is in almost constant motion -- hulling, mashing, cleaning, cooking -- recounts for her daughter's camera elements of her own childhood, marred by war against the French colonists, forced at an early age into an arranged marriage she had little interest in, spending all of her time working, either at home or at the market stall where she sells foodstuffs. Her story is not vastly different from her sisters, all married off (one of them as young as 14, who was told if she didn't do as her father demanded she would cry tears of blood at his funeral), and all mostly unhappy about it.

Mbakam's film, her feature debut originally released in 2018, is impressively assured, capturing the sense of her native land and the culture she left behind to forge a new life for herself a continent -- and seemingly, a lifetime -- away. Spending time with her mother, as she gathers with her sisters preparing mashed koki beans for a family reunion or meeting with her other female friends in their collective tontine, where they help support each other financially and spiritually, she bridges the gap between them. Her mother might not know much about "cinema" (she recounts having gone to a theater to see a film only one time in her life, after she'd had a fight with her husband, and only recalls that it involved a lot of violence and people shooting at each other), but speaking candidly about her life and difficulties with her daughter, it is through that lens that her life becomes better in focus.

Teleported Bonus: Along with Mbakam's other feature at this year's festival, "Delphine's Prayers," a bag of chin chin, a delicious Cameroonian snack.

"Songs That Flood the River": German Adolfo Arango's film, part documentary/part interpretive essay (a T/F staple), follows an older woman named Oneida, a member of a small village community living on the Rio Bojaya in Colombia. Oneida's life has been filled with hardships and miseries -- when she was 8, she lost her leg after a bite from a lancehead snake -- but much worse than her personal suffering was what happened to her community one day in 2002, when FARC guerrillas, fighting against the government, bombed a church where many of Oneida's friends and neighbors were hiding to avoid the violence; 119 people died in the bombing, including 45 children.

The village deeply mourned the loss, but even worse for them was the idea that the remains had been so scattered, the dead wouldn't even receive a proper burial. Oneida had been taught to sing alabados -- traditional funeral songs intended to ease the journey of the dead soul to a final resting place -- by her mother, and had sung them all her life. In the face of this catastrophe, she sang them again to speak out against the acts of violence and to demand that her people receive proper treatment from the government. Her songs became narrative examinations of her people and culture, letting them be known to her fellow countrymen (at a formal peace treaty ceremony, she sang her songs, accompanied by the other singers in her village for the world to see).

Arango's film, poetically composed by DP Liberman Arango, spends time with Oneida in her village as she goes about the day's chores -- great attention is paid to the vigor and intensity with which she and many of her fellow village women scrub everything from clothes to cooking pots with purpose -- as she tells us the stories of her life in voice over and in her on-camera songs. But the director also allows for moments of lyric intrusion -- scenes of a young woman seemingly walking over the surface of the river itself, long, static shots of the film's subject staring directly into the lens -- that adds to it a sort of silent visual poetry.

The song is an act of defiance against governments, enemies and cruel acts of God; but also, in the face of grief. The song says you will not suffer alone, in silence, it says your story will be heard, the miseries of your life will be revealed, you and your sadness will become known.

Teleported Bonus: Among other treasures, a hunk of rich Colombian chocolate.