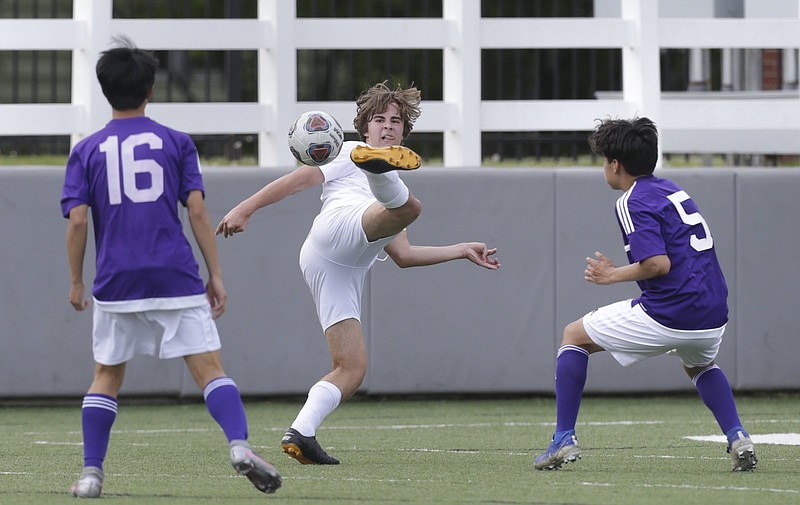 SPRINGDALE -- Stefan Gerlei worked free inside the box and drilled a short shot into the back of the net, then did a full front roll to celebrate his goal.

Gerlei's opening goal at the 29:51 mark of the first half gave Bentonville West the early lead, and the Wolverines held off Little Rock Catholic 2-1 in a first-round 6A state boys soccer match Thursday at Jarrell Williams Bulldog Stadium.

"I celebrated and then everything just kind of zoned out," said Gerlei, who added another goal for the Wolverines later in the half. "I just kind of flipped and landed on the ground. My friend came and sat on top of me and just started rowing."

Whether he was flipping or kicking, Gerlei was glad to be back on the soccer pitch after missing most of the season with a back injury.

"I have a birth defect that I just found out about," he said. "My vertebrae is a little bit crooked so it rubs against my other vertebrae. So I've been doing a lot of physical therapy and I had a steroid shot and I've been back for about three weeks and now I'm feeling a lot better."

West Coach John Marshall said the key to the victory was the Wolverines' attack. West brought relentless pressure to the Rockets (9-5-5), especially in the first half.

"I thought we did an excellent job of coming out at attacking and finding the goal early on," said Marshall. "I think Stefan did a great job of being right there about three yards in for both goals. But I think we made the game a little harder than we needed to because we had so many opportunities. We had a lot of opportunities that we missed."

Gerlei's second goal came about four minutes after the first when the Wolverines peppered the Catholic goalkeeper with three shots before Gerlei got the ball into the net for the 2-0 lead.

Catholic finally got on the board with just over 11 minutes left in the first half when Lucas Bozeman worked inside the West box and knocked in a header off a free kick. The Rockets sent the kick into the middle of the box, and Bozeman rose up high to bang it in, making it a 2-1 game at halftime.

West continued its attack in the second half, but Catholic was able to turn the Wolverines away time and again to keep the match at a one-goal difference.

The Wolverines had a scare late in the match when Catholic fired on West keeper Lleyton Hull was able to finally corral the ball just a step outside the net to preserve the win.

"Lleyton Hall is a fabulous player," said Marshall of his senior keeper. "I think Catholic did a great job in their attack and had a header and he saved it. I think the first goal was kind of a fluke that went in, but he definitely saved us there at the end. That would have been huge."

The Tigers (9-2-5) unleashed a relentless attack and cruised to the victory.

Bentonville will take on Conway in today's 10 a.m. match.

Rasto Rimbo, Shea Glover and Graham Witte all had goals for Fayetteville. The Bulldogs will advance to the second-round today where they will face No. 2 seed Springdale Har-Ber at noon.

The War Eagles made it a clean sweep for the 6A-West, as Miguel Reyes scored a hat trick in the first 14 minutes of the first half.

Reyes found the net less than two minutes in, then added two more goals as the War Eagles rolled to the first-round win.