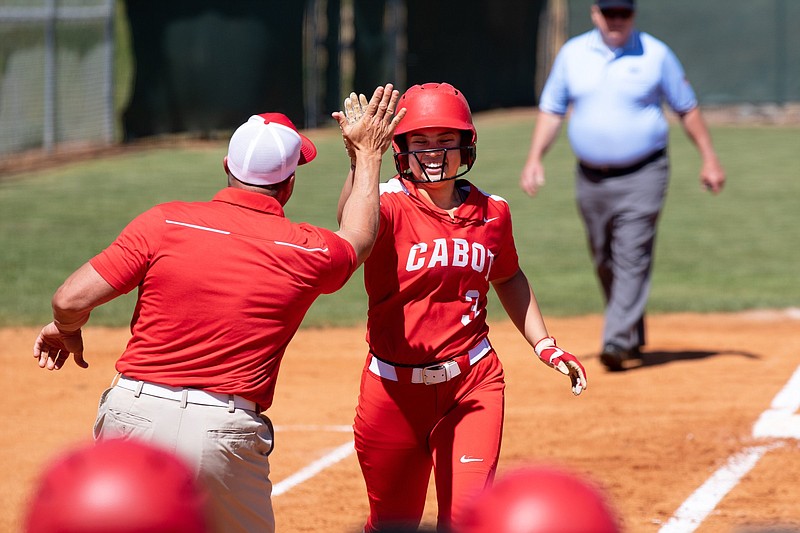 Cabot’s Grace Bear celebrates with Coach Chris Cope after hitting a home run Friday against Fort Smith Southside in the Class 6A state softball tournament in Cabot. The Lady Panthers won 11-9 to advance to today’s semifinals, where they will face Conway at noon. (Arkansas Democrat-Gazette/Justin Cunningham)

CABOT -- With the potential game-ending run 60 feet away, Cabot's Savannah Snow lifted a lazy fly ball to shallow center in the fifth inning that did not drive in the run.

As the ball drifted into the glove of Fort Smith Southside's Kyle Hass, you didn't have to listen hard to hear the frustration of Lady Panthers Coach Chris Cope. He whipped his cap off his head, yelling for a second before heading back to the dugout.

Little did he know how costly that missed opportunity was going to look in retrospect.

"We played for five innings," Cope said. "And then things went kind of downhill for us for a while."

But a timely pitching change and and that early cushion were just enough for reigning state champion Cabot to slip past Fort Smith Southside 11-9 on Friday in the Class 6A quarterfinals. Although sophomore Akayla Bernard held the Lady Mavericks to two runs on three hits, Southside didn't relent.

"Something I've known about my young girls for a long time is that they fight," Southside Coach Mark Reichert said. "After [the first inning], the girls did a good job laying off the high pitch and just seeing those good at-bats. I think it became contagious for us.

"This is the state tournament. You just fight until the very last out."

Southside designated player Hana Dingman, who finished 3 of 4 with 2 RBI, launched her second home run of the tournament to lead off the top of the sixth. The next two Lady Mavs reached before Felicity Suggs placed one just over the wall in left, pulling Southside to within 11-6.

Before it was all done, the Lady Mavs sent 12 batters to the plate, cutting the deficit to 11-8. Then one batter into the seventh, Southside made it 11-9 when Suggs lifted another home run to straightaway center.

That drew Cope to the circle. He pulled Bernard in favor of junior Brianna Garriga.

"Defense didn't help," Cope said of his team, which committed two errors that led to three unearned runs. "That puts a lot of pressure on a pitcher -- and her stuff wasn't working -- so we got Bri to come in, and she did a good job."

Garriga allowed a pair of runners but struck out a batter, and the Lady Panthers' defense caught the Lady Mavs attempting to steal to close out the win.

Cabot did its offensive damage early -- the Lady Panthers posted crooked numbers in the first, second and fourth innings. Snow led the way, going 2 for 4 with a home run, a double, 2 runs and 3 RBI. Grace Bear came through with a pinch-hit three-run home run in the second to highlight a seven-run inning.

Katlyn Erickson delivered in the circle for the Lady Wampus Cats to set up an all-Central semifinal against Cabot.

Conway's Allie McMillen hit a three-run home run to center after the first two batters of the game reached base, putting the Lady Wampus Cats up before making an out. After that, Rogers' Madison Heinle set down 18 of the next 20 batters. She struck out 12 and scattered four hits.

Conway tacked on an insurance run in the top of the seventh when catcher Saige Teague lined an RBI double to right-center, scoring Breelyn Conley.

That run proved to be the difference.

The only blemish on McKenzie Vaughn's afternoon was a two-out home run in the top of the seventh, breaking up her and the Lady Tigers' shutout.

The Bentonville senior allowed two hits while striking out six for the 6A-West's top seed.

The Lady Tigers got to Lady Bears' starter Cailin Massey again in the fourth. Second baseman Emily Perry belted a two-run shot to center, making it 7-0.

The Lady Hornets got a big boost when catcher Buddha Dillon smashed a fourth-inning, three-run home run into the bleachers in left-center as they moved to the semifinals.

Bryant scored two runs in the first and two more in the sixth, but junior Chrissy Mefford needed only one. She shut out the Lady Wolverines over seven innings, scattering five hits -- never surrendering more than one in any inning. 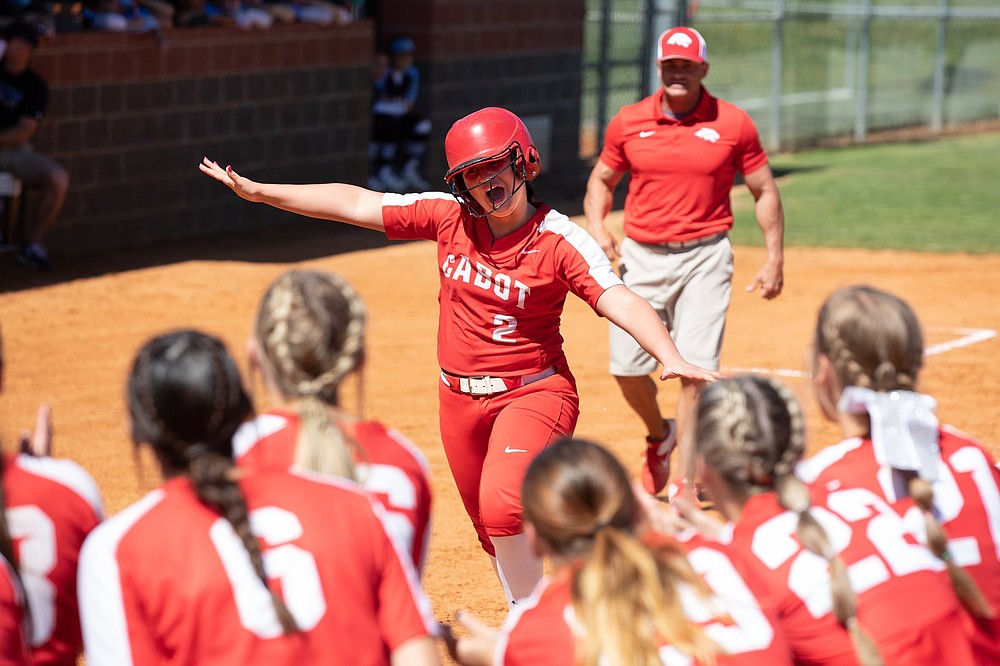 Savannah Snow of Cabot celebrates after hitting a home run to lead the defending state champions to an 11-9 victory over Fort Smith Southside in a Class 6A state softball tournament quarterfinal Friday in Cabot. Snow went 2 for 4 with a home run, a double, 2 runs and 3 RBI for the Lady Panthers, who move on to play Conway in a semifinal today. More photos at arkansasonline.com/515girls6a1/. (Arkansas Democrat-Gazette/Justin Cunningham)
ADVERTISEMENT