Relief spendingtails off in April by Compiled Democrat-Gazette Staff From Wire Reports | May 15, 2021 at 1:51 a.m. 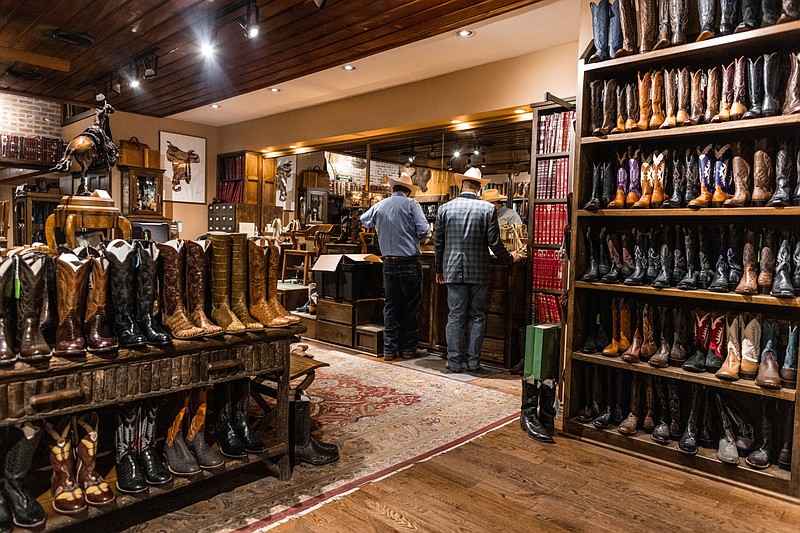 Customers shop for boots at M.L. Leddy's in Fort Worth, Texas, on April 12, 2021. MUST CREDIT: Bloomberg photo by Kathy Tran,

U.S. retail sales stalled in April after a sharp advance in March when pandemic-relief checks provided millions of Americans with increased spending power.

The value of overall retail purchases was essentially unchanged last month after an upwardly revised 10.7% gain in March that was the second-largest in records back to 1992, Commerce Department figures showed Friday.

The total value of retail sales was a record $619.9 billion in April.

While consumers may begin to shift more of their spending to services such as entertainment and travel as pandemic fears dissipate, elevated savings supported by fiscal stimulus should help underpin retail demand.

The question is whether consumers will continue to spend without stimulus checks. "The April retail sales tip the odds toward slower sales in the coming months," said analysts at Contingent Macro Advisors.

Friday's report comes amid other signs the economy is improving as vaccinations accelerate and business restrictions are relaxed. The number of Americans seeking unemployment benefits fell last week to 473,000, a new pandemic low. And consumer confidence hit its highest level last month since the pandemic began.

On Thursday, the U.S. Centers for Disease Control and Prevention said vaccinated Americans don't need to wear a mask or social-distance outdoors and in most indoor settings, which may get more people to travel, eat out or shop.

Consumer spending, which makes up two-thirds of all economic activity in the U.S., is closely monitored by economists to gauge the nation's economic health. Friday's report covers a third of all consumer spending but doesn't include services, like hotel stays or haircuts.

Eight of 13 retail categories registered declines in April sales, with the largest percentage decrease at clothing stores, which fell 5.1% after a 22.7% surge in March.

Sales at non-store retailers, which include e-commerce, fell 0.6% in April. General merchandise store sales fell 4.9% and the value of purchases at sporting goods outlets dropped 3.6%.

The value of restaurant receipts rose 3% after a 13.5% March gain as states across the country eased restrictions on indoor dining capacity.

Sales at motor vehicle and parts dealers climbed 2.9% in April, even as automakers faced production constraints due to the global semiconductor shortage.

The pandemic substantially reshaped consumer behavior. Grocery store spending surged during the pandemic while restaurant revenue dropped. Apparel sales plunged as Americans canceled events, and spending on outdoor activities and home improvements soared. As vaccinations have picked up and warmer weather has taken hold, the retail industry has been waiting to see if spending will revert to its prepandemic levels.

The Easton Town Center, a popular open-air shopping center in Ohio, has been getting "close" to 2019 levels of foot traffic, though bad weather in April dampened some of its momentum, said Jennifer Peterson, the center's chief executive. She said the center was planning to create summer attractions like a "prosecco plaza" and resuming events like concerts and movie nights with new adjustments like social distancing and masks.

"We're thinking of this summer as kind of a relaunch of Easton, knowing that the pandemic has really put people's mindsets in a different place," Peterson said. "We want to bring them back with joyful activities."

Retailers will continue to walk a tightrope in the coming months as they work to attract shoppers while creating a safe environment. The latest wrinkle came Thursday with the CDC's new guidance for masks, saying that it is safe for fully vaccinated people to remove face coverings in most indoor settings.

Retailers, from individual chains to shopping centers, are still reviewing that guidance and figuring out what it could mean for employees and customers. The CDC's declaration does not override mask orders from states, counties or cities. The United Food and Commercial Workers union, which represents thousands of grocery store workers, called the guidance "confusing" and said it failed to consider employees who regularly interact with unvaccinated, unmasked customers.

Information for this article was contributed by Olivia Rockeman of Bloomberg News (WPNS), by Joseph Pisani of The Associated Press and by Sapna Maheshwari of The New York Times.