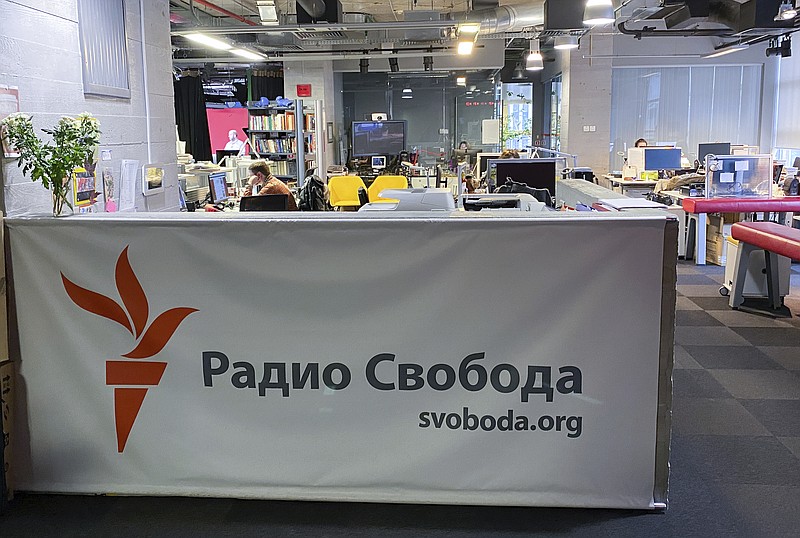 Journalists work at a newsroom of Radio Free Europe/Radio Liberty's Moscow Bureau in Moscow, Russia, Wednesday, Jan. 27, 2021. Russian court bailiffs have shown up at U.S.-funded Radio Free Europe/Radio Liberty's Moscow Bureau to notify it about the launch of enforcement proceedings over unpaid fines. RFE/RL denounced the move as a serious escalation in the Russian government's campaign to drive it out of the country. (Anton Sergienko, RFE/RL via AP)

MOSCOW -- Russian court bailiffs showed up Friday at Radio Free Europe/Radio Liberty's Moscow bureau to notify it about the launch of enforcement proceedings over unpaid fines as part of mounting pressure on the U.S.-funded broadcaster.

Radio Free Europe/Radio Liberty's President Jamie Fly said the broadcaster's Moscow bank accounts were also frozen Friday in what he denounced as a serious escalation in the Russian government's campaign to drive it out of the country.

"RFE/RL will continue to fight these desperate attempts by the Kremlin to censor uncomfortable truths," Fly said in a statement. "We will not be silenced by these heavy-handed tactics and we will not abandon our Russian audience."

Last year, Russia's media watchdog Roskomnadzor ordered the media designated as foreign agents, including Radio Free Europe/Radio Liberty, to add a lengthy statement to news reports, social media posts and audiovisual materials specifying that the content was created by an outlet "performing the functions of a foreign agent."

[Video not showing up above? Click here to watch » https://www.youtube.com/watch?v=tul-MfRb2ik]

The move, which applies to nongovernmental political organizations and media receiving foreign funding, has been widely criticized as aiming to discredit critical reporting and dissent. The term "foreign agent" carries strong pejorative connotations in Russia.

In a call with reporters, Fly said that the broadcaster has refused to pay the fines because it considers them unlawful.

"We have been very clear throughout this that we will not pay these fines," he said. "We believe that the labeling is illegitimate; it violates Russia's own constitution. We aren't going to back down in the face of this pressure."

The broadcaster has asked the European Court of Human Rights to order Russia to refrain from enforcing the fines until the court can make a full ruling on Roskomnadzor's moves, which Radio Free Europe/Radio Liberty contends violates the European Convention on Human Rights.

U.S. Secretary of State Antony Blinken has condemned Russia's mounting pressure on the media as a sign of the Kremlin's weakness. 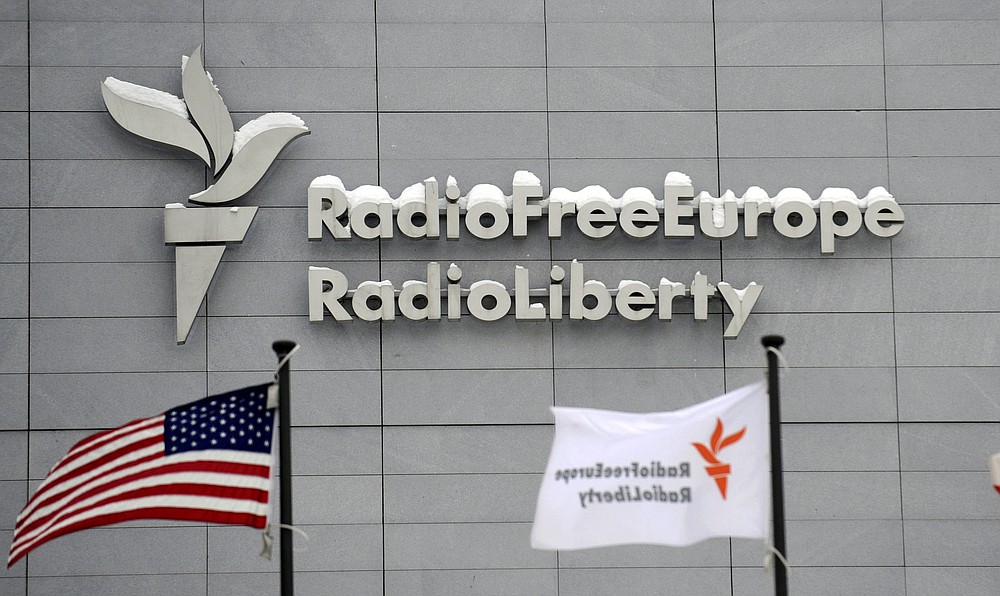 FILE - In this Friday, Jan. 15, 2010 file photo, the headquarters of Radio Free Europe/Radio Liberty (RFE/RL) is seen with the United States flag in the foreground, in Prague. Russian court bailiffs have shown up at U.S.-funded Radio Free Europe/Radio Liberty’s Moscow Bureau to notify it about the launch of enforcement proceedings over unpaid fines. RFE/RL on Friday, May 14, 2021 denounced the move as a serious escalation in the Russian government’s campaign to drive it out of the country. (Michal Kamaryt/CTK via AP, file)
ADVERTISEMENT