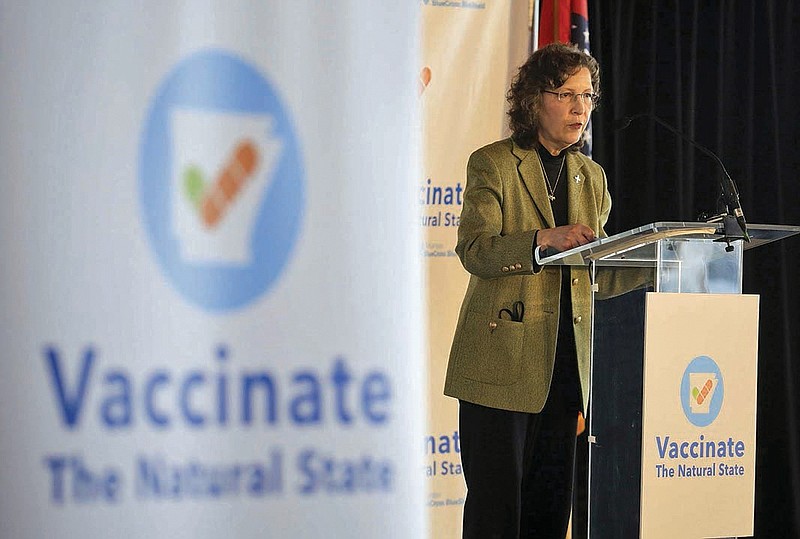 Dr. Jennifer Dillaha, state epidemiologist with the Arkansas Department of Health, speaks Feb. 22 in Little Rock during a press conference to announce a new initiative to educate Arkansans on the benefits of the COVID-19 vaccine. - Photo by Staton Breidenthal of the Arkansas Democrat-Gazette

Friday’s 15,339 shots were the most administered in almost two weeks, and both days were a boost from what had been a seven-day rolling average of fewer than 9,500 doses per day.

“Any day over 10,000 [shots] to me is a good day,” state epidemiologist Jennifer Dillaha said Saturday.

Some pharmacies and health care providers have not yet received the doses of Pfizer shots they will administer to newly eligible children, Dillaha said, so she expects the number of shots administered to trend upward in the coming days.

In his daily Twitter statement about the state’s covid-19 numbers, Gov. Asa Hutchinson said he has been asked why Arkansas’ pace of vaccinations has been lagging behind other states.

“Since there are no mandates, it comes down to an individual choice [and] motivation,” Hutchinson tweeted Saturday. “We’re spending millions of dollars to encourage shots in arms. We’ve ample supply [and] our providers are making it easy to get a shot.”

The state reported that 166 Arkansans were hospitalized with covid-19 on Saturday, down six from Friday. Of those, 27 were on ventilators, a reduction of four from Friday.

Three deaths in Arkansas were linked to covid-19 on Saturday, raising the official death toll from the disease in Arkansas since March 2020 to 5,793.

Active cases rose by 47, to 2,116. That’s the highest total since Sunday, but it’s also down by 150 cases from a week earlier. The 2,266 active cases reported May 8 remains the highest one-day total the state has seen since late March.