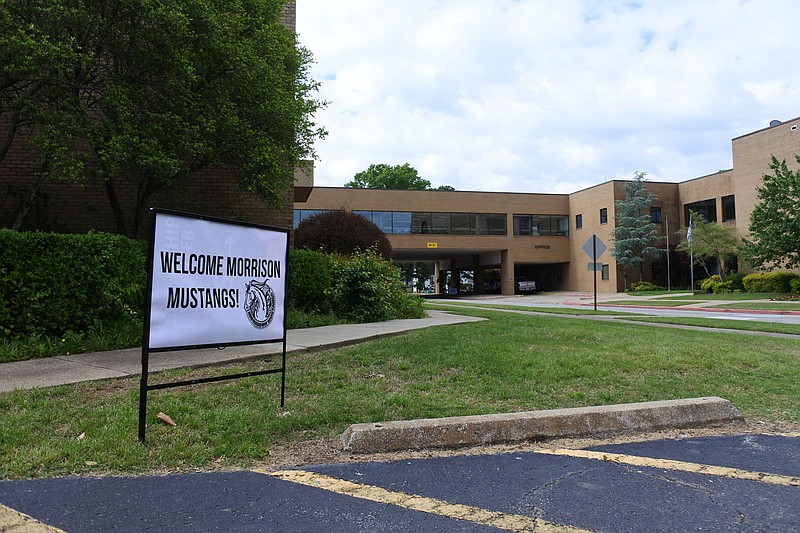 A sign welcoming students and staff of Morrison Elementary School can be seen at the front of Grand Avenue Baptist Church in Fort Smith on Thursday. (NWA Democrat-Gazette/Thomas Saccente)

FORT SMITH -- An EF-1 tornado that hit the city earlier this month forced a school's students and staff to move through the end of the academic year.

Grand Avenue Baptist Church in Fort Smith became the place for prekindergarten through sixth grade on-site learning for Morrison Elementary School on Wednesday, according to a School District news release. The last day of school is May 28.

Morrison had heavy damage from a tornado that started in Oklahoma and moved through the north side of Fort Smith into Van Buren on May 3.

Britney Watson, principal of Morrison, said Thursday the damage makes the third consecutive year the school has experienced a crisis at the end of the academic year. Flooding of the nearby Arkansas River damaged the school in 2019, and the covid-19 pandemic closed school buildings last spring.

"And now, we're just encouraged, and we know that we're doing what is best for kids," Watson said. "We all rallied behind them, and now it's heartwarming to see that everyone was able to pull together and to pull this off and to make it happen for our students."

Bill Hollenbeck, chief of the district's Police Department and director of security and facilities for the district, told the School Board during its Monday work session the tornado stripped roofing off the school.

The storm damaged the school's heating, ventilation and air conditioning units, Hollenbeck said. Several were lifted off their foundations, shifted about half a foot and slammed down, causing structural damage to the roof, he said. Several classrooms had considerable water damage and daylight could be seen in certain closets in the facility.

The storm also caused stretched and separated gas lines throughout the roof and interior of the building, according to Hollenbeck. He said gas fumes filled the school the night of the storm until the lines were shut off.

A section of the school's foundation was damaged as well, Hollenbeck said.

Hollenbeck estimated it would take at least 12 weeks for new HVAC units and other equipment to be delivered.

"So I want to make sure that our expectations are that we're going to do everything that we can to get the school open before school starts next year," Hollenbeck said. "But, we just have to keep in mind it's all dependent upon the amount of lead time with the equipment and so forth."

Christina Williams, the School District's coordinator of public information, said Wednesday the district is still determining the extent of the damage at Morrison and is working with experts to determine replacement and repair costs.

Insurance will be a primary source of funding to fix the school, Williams said. State money is another possibility should the damage meet criteria to be declared an emergency.

Watson said Morrison shifted to online learning prior to Wednesday's moving. Grand Avenue Baptist Church was chosen as the alternative site for a variety of reasons, including its close proximity to the school; the church is about 4 miles south of the school. Other reasons included the security of the building, having shelter in the event of inclement weather, having a kitchen that can be fully operational for breakfast and lunch and having enough space for teachers and students.

Watson said Wednesday felt like the first day of school. Morrison educators teach procedures according to their building, and a new building dictates new procedures for the cafeteria, restrooms and playground.

Zuri Hesson is a first grade general education teacher at Morrison who also has a son attending prekindergarten there. Hesson said the students adapted quickly to the change.

"They were very excited just to be with each other and to be back in the classroom and to see familiar faces," Hesson said.

Watson said some of the student feedback she has heard is that having school there was like "a really long field trip."

"I think a lot of them were just excited to see something new," she said.

Watson said 95% of Morrison's students were in attendance at the temporary location Wednesday.

First Baptist Church in Fort Smith, which Morrison also considered, donated material such as paper, pencils and crayons that the school wasn't able to recover from its damaged facility.

Morrison Elementary School has an enrollment of 263 K-6 students and 40 prekindergarten students.