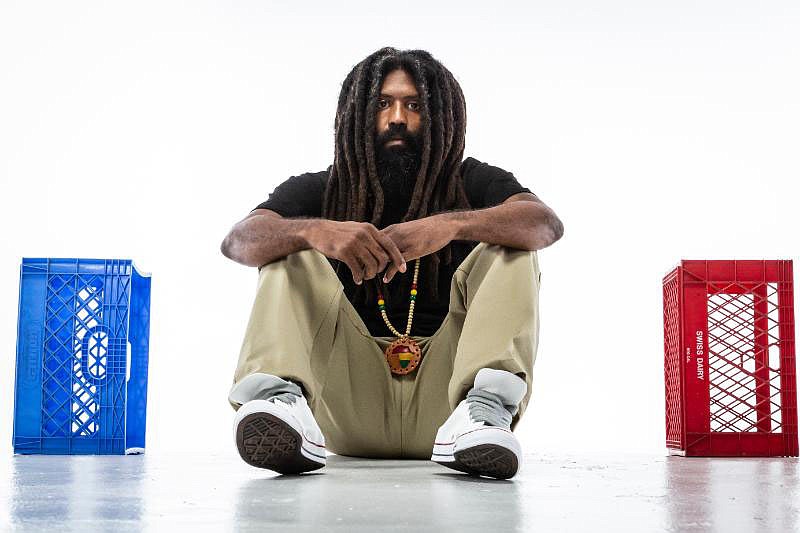 It’s up to the community to help spread the work of artists in Norrrhwest Arkansas, rapper and hip hop artist Murs says. Groundwaves(AR), the second iteration of his monthly open mic and mentorship program, will give people something to travel with, he asserts. “A piece of home to take and spread to wherever you’re traveling. Wherever you’re going, take your artists. Support. Text a link to your cousins in Tennessee, let them know what’s going on. Because music is part of our expression; it’s how we leave our imprint as a people. Musicians are, I feel, I’m a public servant. I am a voice for my community. You have a ton of voices in Northwest Arkansas. Groundwaves is going to present them to you, I’m going to help develop them. And hopefully we can all join in spreading their music and art, and our music and art across the globe.” (Courtesy Photo)

How do hip hop artists in Northwest Arkansas begin to make a name for themselves? Who is already working the scene here? Is there even a place in the culture for a new artist?

During the six-month program, Murs will arrive in Springdale on the third Tuesday of each month beginning May 18 to preside over an open mic event, which is free and open to the public. He and the rest of the audience will give performers feedback in real time, and the following day, those artists can schedule one-on-one meetings with Murs for the mentorship side of the series. It's a format Murs proposed as a way to get more young people involved in the art, while strengthening the talent and the community.

"Kids feel as if putting music on Soundcloud or a streaming site makes them a musician or makes them a rapper, and in my era, there was a lot more to it," Murs explains.

Though he admits he's never had a Platinum record, Murs got his start selling his albums out of a backpack in cities across Europe. He cut his teeth in the industry learning how to win over rooms full of people who didn't even speak the same language. Gaining fans through a reputation for putting on one of the best live performances in rap, Murs has now worked with some of the biggest names over hip hop's last three decades and has the career demonstrative of his teachings for these burgeoning artists.

"Now, a lot of younger rappers are just performing over their vocals, and that's something that's not allowed at Groundwaves -- no hate speech, and no performing over your own vocals," he says. "That's how I grew up, and I think it's essential that people hear you and feel you. That's the beauty of punk rock and screamo; it's not technically sound or hitting the right notes, but you feel it. I think hip hop had that same element and, as everything goes digital, we're losing that feel."

Sam Lopez, creative communities coordinator with CACHE, agrees there's a showmanship required of performers in the genre that can only come from time spent in front of, and learning to connect with, an audience.

"You do need to, every now and then, be reminded that maybe you're not as good as you think you are. And maybe you're great. But you need to be comfortable in those spaces and being critiqued," Lopez points out. He clarifies that criticism doesn't mean someone's art is bad; it's the process through which growth is possible.

"We need a place where that's OK. Where it's safe to take the mic, to say what you need to say, and be open to the opinions of other people so that you can grow. And that's on our community as a whole to be open to letting people like that into their space and holding the audience to respect it."

Groundwaves will be one of the first steps toward building community around that idea, Murs says. He calls it a safe space but not a safe space.

That doesn't translate to a free license to come and lambaste performers, though. Just as streaming services can create a false sense of accomplishment for artists, the Internet also allows mean-spirited voices or even trolls to criticize without accountability, Murs asserts. At Groundwaves, particularly vocal audience members will be called out to address the performer directly. It's not a system meant to shame or embarrass; it's meant to encourage constructive criticism that will truly help the artists improve.

"Hip hop is a culture of resistance and celebration, and it exists within people that have no voice," Lopez suggests. "When people start using the art form, it starts gaining traction with people that feel that way. So, inherently, I've seen a lot of people who were silent or didn't really feel like talking, speak up. And to me, that's good because it means they're going to get represented. That means there's people willing to step out and say some things that might make others uncomfortable, or say what needs to be said and add more to the dialogue."

As for what to expect on stage, Murs reveals with a laugh, "Colorado taught me not to place limits, and definitely prepare for surprise."

In the three years since the program's founding, Murs has mentored a rapper who came to Groundwaves at age 12; artists who speak only Spanish; a spoken word poet and hemp farmer who'd never listened to rap before; 50-year-old artists; a cellist who thought his stringed instrument would keep him from being taken seriously but now uses it in his rap collaborations; and myriad other stories.

"We're definitely breaking boundaries. And I'm searching for more diversity," he shares. "To be from Arkansas is going to diversify the conversation of hip hop in general and making that voice bigger."

That voice needs ears to land on in order to get bigger. Come, Murs urges. Discourse happens when differing opinions, experiences and stories come together in a room, and that's how the community will grow, he assures.

"Especially if you live in Springdale or in Northwest Arkansas, it's nice to be surprised in your home," he adds. "Where, you think you know everyone, you think you know everything that's there, and then someone gets on stage and you're like, 'What?' and 'Who is this?' And they could have lived around the corner the whole time, and you never know.

"So I encourage people in the community to come out and see your folks. See what they're up to. I think it will also change your perspective on hip hop. And they need your feedback." 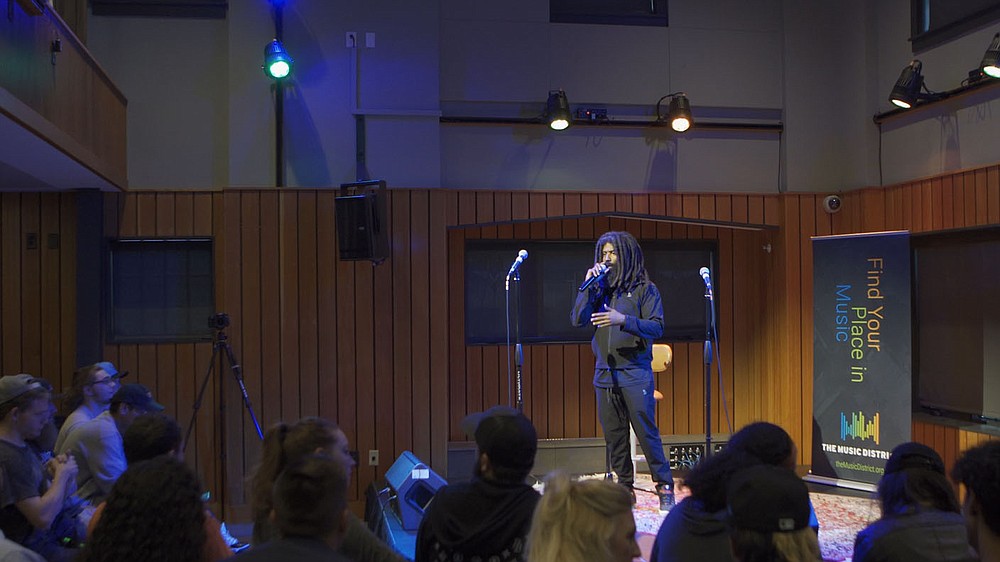 From May to October, Groundwaves(AR) will give hip hop and rap artists in Northwest Arkansas the stage and the opinionated audience needed to improve their craft. The third Tuesday of every month will be an open mic, like this one from the program’s first iteration in Fort Collins, Colo. The following day, artists can sign up for one-on-one mentorship sessions with artist Murs to discuss artistic development, the business of music and more. By the end of the season, there is sure to be some friendly competition and collaboration between the Arkansas and Colorado participants. (Courtesy Photo/Kind Dub, LLC)
More News

COST — Free to performers and audience

FYI — Sign-ups are in person only and begin at 5 p.m. the day of the open mic each week.