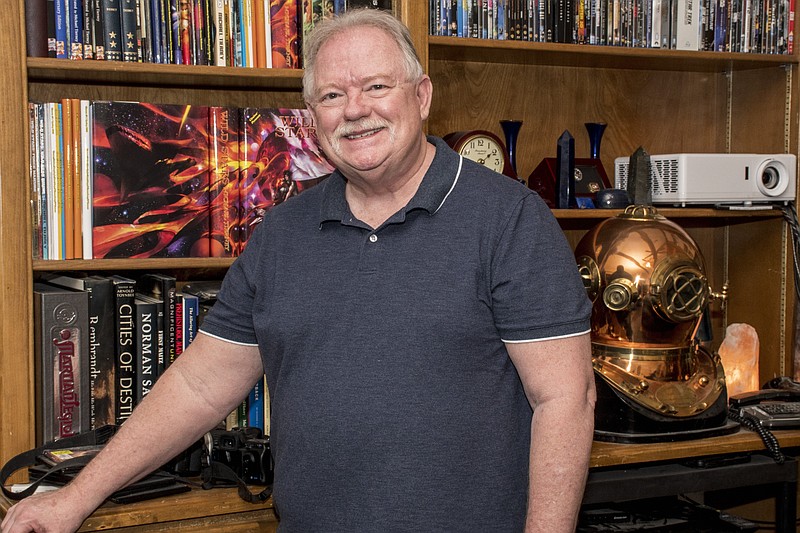 It is the morning of June 22, 2001. Miriam Mayne has plans to meet her billionaire father for dinner that evening at his home on Long Island to celebrate her 21st birthday.

After breakfast, she steps from her room onto a balcony, raises her arms and flies thousands of feet into the sky above the endless sprawl of New York City.

If the name rings a bell, it's probably because Hawthorne is the son of novelist and short story writer Nathaniel Hawthorne, whose books include "The Scarlet Letter: A Romance," "The House of the Seven Gables: A Romance" and more.

"The Cosmic Courtship" first appeared in serialized form in four issues of All-Story Weekly beginning with the Nov. 24, 1917, issue and concluding with the Dec. 15, 1917, edition.

In his tale of romance and adventure, Hawthorne writes breathlessly of Miriam, the young assistant of brilliant scientist Mary Faust. Miriam's consciousness has been accidentally transferred to Saturn, where she falls under the spell of an evil sorcerer. Her love, Jack Paladin, sets out to rescue her "on a thrilling celestial journey to the ringed planet." 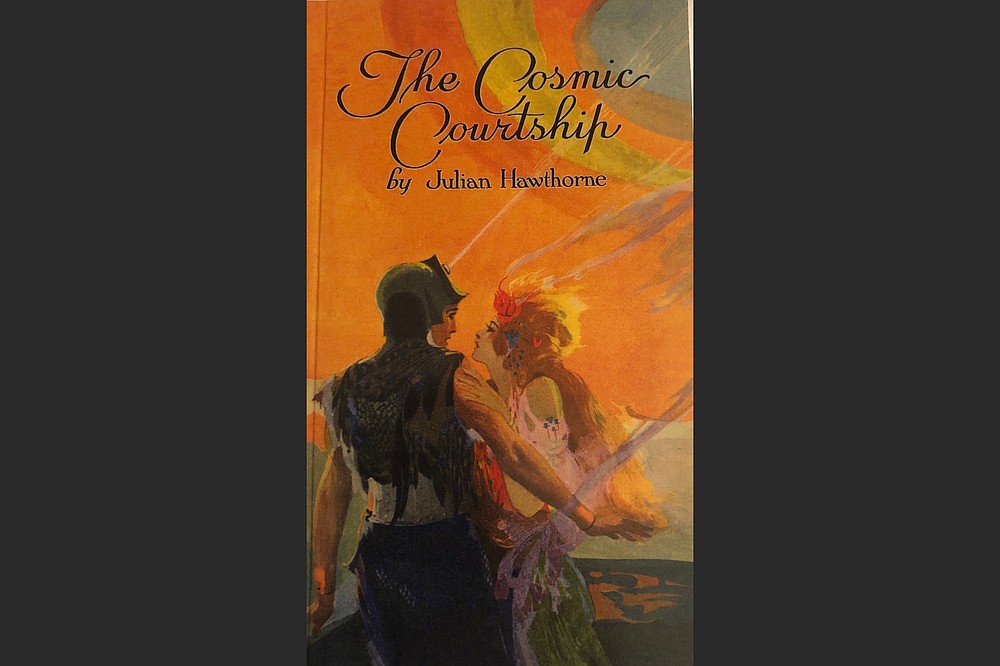 "The Cosmic Courtship" has never been collected or republished, and would have been lost entirely if not for Maumelle comic book dealer, author and tireless pulp magazine collector and archivist Michael Tierney.

Little Rock-based Cirsova Publishing has teamed with Tierney to publish "The Cosmic Courtship" for the first time since its debut more than 100 years ago. It will be available in hardcover, trade paperback and magazine formats.

The project came about when Tierney, who last year closed his long-running shops Collector's Edition in North Little Rock and The Comic Book Store in Little Rock and switched to a mail-order business model, was searching for materials for his 2019 four-volume "Edgar Rice Burroughs 100 Year Art Chronology."

"I was looking at all these pulp magazines, and there was some fantastic stuff," he says at the kitchen table of his home, which is pleasantly cluttered with shelves, boxes and stacks of books, comics, magazines and other ephemera from his decades of collecting and selling. "This is where the literature that we know today, as far as 'fantastic fiction,' came from."

All-Story Weekly, the first American pulp magazine, had been around since 1882, when it was a children's weekly called The Golden Argosy. It was one of many titles published by Frank Munsey, who pioneered the process of printing on untrimmed, inexpensive pulp paper.

The proliferation of cheap pulps in the first part of the previous century were a vessel for "hundreds of thousands of words and new content every week," the 65-year-old says.

In the pages of the pulps were where writers like Western novelist Max Brand, Conan the Barbarian creator Robert E. Howard and sci-fi author Ross Rocklynne got their starts.

Tierney was posting his pulp magazine finds on his website, thewildstars.com, and included an issue of All-Story Weekly that contained an installment of "The Cosmic Courtship."

"He said that it had never been re-published and asked if I had the rest of the story," Tierney says. "I had everything but one part, so I bought a copy with the other part." 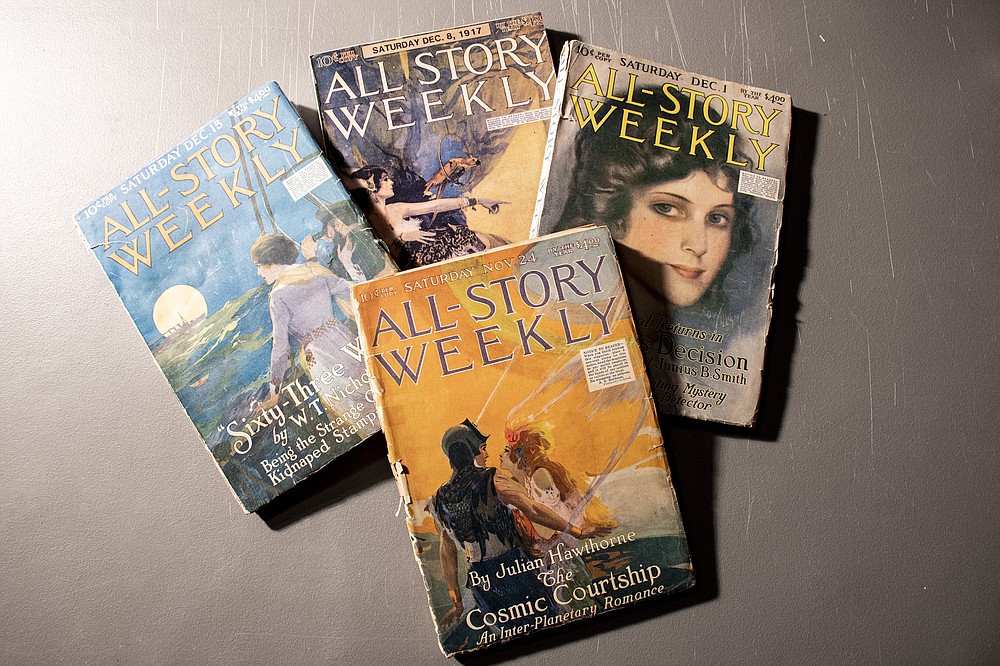 The original 1917 issues of All-Story Weekly featuring the first appearance of Julian Hawthorne’s “The Cosmic Courtship.” (Special to the Democrat-Gazette/Michael Tierney)

A Kickstarter crowd-funding campaign was launched and raised more than $12,600 as of press time toward publishing the book.

To Tierney, the story is unique for a trio of reasons:

"One of the things that's fascinating about it is that it is ... explicitly Christian science fiction. You have people who go to Saturn and find a race of humans who have the same religion as them, though they have managed to have a society that is more pure and more wholesome than that on earth."

Alexander, 36, became a Julian Hawthorne fan after teaming up with Tierney and Lupton.

"He's probably the most prolific author that no one today has read," he says. "Julian Hawthorne was really interested in ideas of outer-body experiences, clairvoyance and that sort of mysticism. It wasn't quite science-fiction writing that he was working on in the late 19th century, but he eventually adapted some of those interests into his writing."

Hawthorne wrote several novels — among them "Bressant," "Archibald Malmaison," "Sebastian Strome" — along with nonfiction works about his father. He spent a year in prison after being convicted of mail fraud in 1913. After his release, he worked as a journalist in Boston and later in California. He died in 1934.

The book version of "The Cosmic Courtship" was created by using photographic images of the magazine carefully made from Tierney's fragile copies, which he keeps in clear plastic bags. Lupton painstakingly re-created the text from the digital images and Tierney restored Fred W. Small's dashing, colorful cover artwork for the book.

Alexander said he hopes to start shipping copies in July. It will be available at Barnes & Noble, Amazon and other retailers. For information, visit cirsova.wordpress.com.

But wait ... there's more. There's another Julian Hawthorne story, "Sara Was Judith," that Tierney says he'd like to re-publish. And his shelves are filled with old pulp magazines and forgotten stories waiting to again see the light of day.

"We've got a lot of stuff in the pipeline," Alexander says.