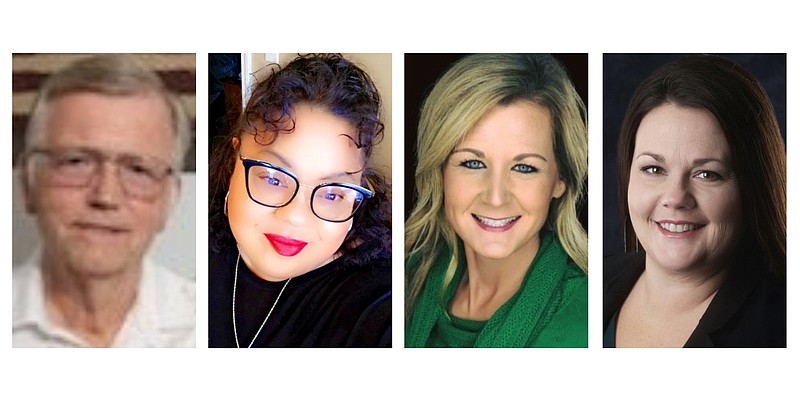 The four candidates running in the May 18 election for the School Board for the Jacksonville/North Pulaski School District are (from left) incumbent Jim Moore, Theresa McClendon, Lauren Martin and Laura Walker.

Tuesday's election for the Jacksonville/North Pulaski School Board features a contested race between newcomers Theresa McClendon and Laura Walker, and uncontested runs for two other seats on the seven-member board.

Lauren Martin is running unopposed for the Zone 1 seat now held by Richard Moss who is not running for reelection.

Incumbent Jim Moore is running unopposed for reelection to the Zone 3 seat.

Walker and McClendon are vying for the Zone 4 seat now held by LaConda Watson who is not running for reelection.

The three victors will join a board that will have an all-new top administrative team, effective July 1, and new-found autonomy to govern after a federal judge this month released the district from reporting to the court on district operations other than facility construction.

U.S. District Judge D. Price Marshall Jr. declared the 3,800-student district unitary, or desegregated, in the areas of teacher incentives, student achievement and student discipline practices. The judge is requiring the district to proceed with building campuses and to continue to report to him annually on that effort.

The board, with its new members, will partner with district's new administrative team --made up of Superintendent Jeremy Owoh and assistant superintendents Janice Walker and Bobby E. Lester -- to oversee the district's receipt of some $17 million in federal covid-19 relief money.

All board terms are for four years and are unpaid.

The contested race in Zone 4 features McClendon, 47, a 14-year special-education paraprofessional in Milwaukee before moving to Jacksonville about a year ago, and Walker, 37, a Jacksonville native and co-owner and operator with her husband, Allen Walker, of the Get A Grip countertop resurfacing company.

Walker has said she is running for the board because as the mother of four young children she has a vested interest in the district and that district decisions have a direct impact on her family.

Walker's two oldest children attend Pinewood Elementary School, which will be replaced by the end of this year with the new Jacksonville Elementary.

"I want to see our city grow, to continue to grow," Walker said. "So many people fought to create our district out of the Pulaski County Special School District. I want to see that what they fought for turns out to be the very best that it can be."

Walker was raised in Jacksonville, graduated from Jacksonville High, and has a psychology degree from the University of Arkansas at Little Rock. She previously worked for the Chamber of Commerce and the Jacksonville Boys and Girls Club.

McClendon, a mother and grandmother of a 4-year-old who will be starting school in the Jacksonville district, said reading and math achievement must be priorities in a district where the majority of students do not score at a "ready" or "exceeds" level on state-mandated exams.

She also said the district must keep its commitments to the federal court to build new schools, two of which have been completed, two are underway and two more in the early planning stages.

McClendon is a graduate of Milwaukee Area Technical College with an associate degree in human services. She said she is a member of the National Education Association, an alumni of AmeriCorps, and has been affiliated with the Boys and Girls Clubs of America, the Big Brothers/Big Sisters and Children's Defense Fund organizations. In Arkansas, she has joined the NAACP and signed up to be an AR Kids Read organization tutor.

McClendon said she is not related to Emily McClendon, a named representative of Black students who are intervenors in a long-running federal school desegregation lawsuit involving the Jacksonville and Pulaski County Special school districts.

Martin said she is pleased with the selection of new administrators for what will be the sixth year of operations for the system that separated in 2016 from the Pulaski County Special School District.

Martin is a graduate of Central Arkansas Christian Schools and has a degree in business marketing from the University of Central Arkansas. She is a member of the board for the Jacksonville Chamber of Commerce and a city Parks and Recreation Department commissioner.

Moore, 74, who has held the Zone 3 seat since 2015, is a 26-year U.S. Air Force veteran, retiring as a chief master sergeant. He is president and chief executive officer of the Stonewall Homeowners Association and is a member of the Jacksonville Planning Commission. He has worked as a youth pastor and youth Sunday School teacher.

"I am dedicated to helping children and teenagers become the very best educated in whatever career they want to obtain," Moore said about his reasons for board service.

He highlighted the district's "enormous building project," and he said his experience of working on the Jacksonville High and Lester Elementary will be a benefit as the district works to complete four more campuses that are worthy of the sacrifices taxpayers make to provide them.

"I also want to ensure that we have the very best teachers and staff in all areas and that they are receiving salaries commensurate with their experience, degrees and licensure. That will, in turn, benefit the scholars of this district."

Moore and his wife, Ivis, have two sons and two granddaughters. He has college degrees in human resource management and in social psychology.