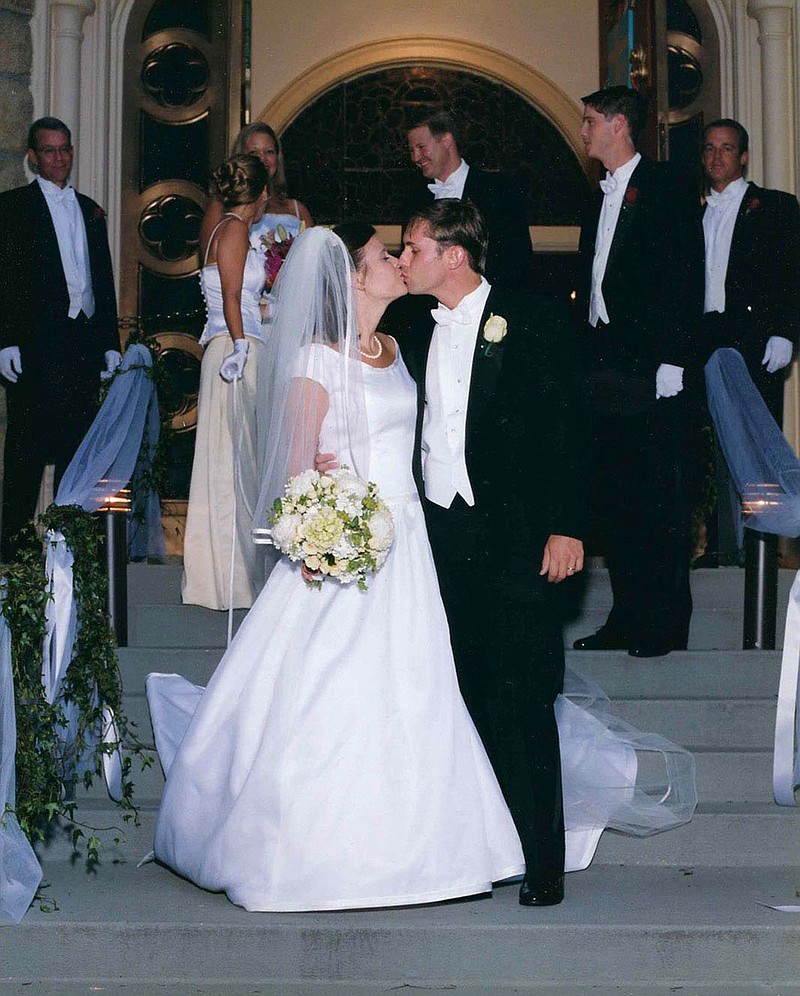 James Harkins was just 7 years old when he declared that he would marry Amy Kemp. Years later, she agreed to be his plus-one for life.

"I was in Hot Springs with a friend of mine and we were at these condos. Amy went running across the pool deck and jumped in the swimming pool," James says. "I looked over at my friend and I said, 'I'm going to marry her one day.'"

Their fathers were friends and worked together in financial management throughout their childhoods in Little Rock. Both went to Holy Souls School, then he went to Catholic High and she went to Mount St. Mary Academy. Their families had lake homes next door to each other. They dated each other's friends throughout high school and college and he and her sister studied together while they were at the University of Arkansas.

"James and I always knew each other and were just always around each other," Amy says. "Our parents tried to get us together when we were younger."

Amy was a debutante at Little Rock Country Club in 1996. She had gone to college out of state, at Mary Baldwin University in Staunton, Va., and Ole Miss in Oxford, Miss., and she wasn't dating anyone, so she needed to find an escort.

"My mom and I were looking through the list of the members and seeing who had boys that were my age and she was like, 'What about James Harkins?'" Amy says.

James, who was attending Hendrix College in Conway then, was sporting hair "down to here."

By 1999, they had both finished their degrees and moved back to Little Rock, and they saw each other at a New Year's Eve party.

"At that age, everybody was getting married. There are all these things that you have at that age to go to," James says.

James was starting his career at Flake & Kelly; Amy was working as a marketing manager for Delta Trust. Both had business engagements to attend. They decided to be each other's plus-one.

Their first "date" was to a friend's wedding, and several other similar events followed.

"He would come to pick me up and while I was upstairs finishing getting ready, he would be downstairs with my brothers, just talking to them or whoever was at our house," Amy says. "People kept asking us, 'What's going on with you guys? Are you dating?' And we were like, 'No, we're just friends.' Like, what's the big deal? We didn't feel any pressure to date."

James and Amy started doing things together that didn't have ties to any career or social obligation on occasion as well, like going to dinner or seeing a movie. Sometimes at the end of the evening, they would go to Amy's parents' house for a stroll with the family dogs.

On one of those walks, Amy posed an indirect question about the meaning of their relationship. She was thinking, she told him, about moving to Dallas.

"He just said, 'Well, I don't do long distance relationships very well,'" she says. "In the back of my mind I was like, 'OK, I'm going to give this a couple of months and just see how this goes.'"

Several months after they started their plus-one arrangement, as James was leaving after a gathering with friends at Amy's house, he was overwhelmed by the urge to tell Amy how he felt.

He backed up his car and stopped it in the street. He ran across the lawn, wrapped her in his arms and told her -- for the first time -- that he loved her.

"I gave her what was the best kiss I've ever given anybody," he says.

He proposed about a year later, getting down on one knee after dinner at Sonny Williams' Steak Room.

"It was like time stopped. It was right at dusk and we were sitting in one of the windows at Sonny Williams' and the sun was going down over the river," Amy says. "He opened the box and my ring was beautiful and it was glimmering. It was everything I had thought as a little girl would happen on an engagement."

James jokes that before he and Amy made it back to his car that night after dinner they had set a wedding date.

Amy and James live in Little Rock with their son, Alex, who is 15.

Now, of course, they are each other's plus-one for all of their social and business obligations. They routinely support CARTI and Arkansas Children's Hospital, and Amy is a founder of Little Rock's PFLAG chapter.

Their foundation was built on friendship and they continue to enjoy each other's company throughout it all.

"We have really built a life that both of us wake up excited to experience every single day," Amy says.

The first time I noticed my future spouse:

She says: “The way his mom had his hair cut, his ears were kind of sticking out. I remember him in his Holy Souls uniform. I was kind of indifferent to him.”

He says: “She was jumping into a pool at a condo in Lake Hamilton.”

She says: “We had so much fun they had to come in and shut our reception down. James and I were sitting upstairs at the Capital Hotel and we didn’t know all of our friends were partying at the bar downstairs.”

He says: “The thing that I remember was ... we were sitting there eating sushi and little meatballs and cake and we were talking about the night, and we turned on the TV and we were watching ‘The Brady Bunch in Hawaii.’”

She says: “They have to be your person. And you have to make a conscious choice every day that that is your best friend.”

He says: “Be friends. We have a feel for each other, like I can tell how she’s feeling without us speaking.”