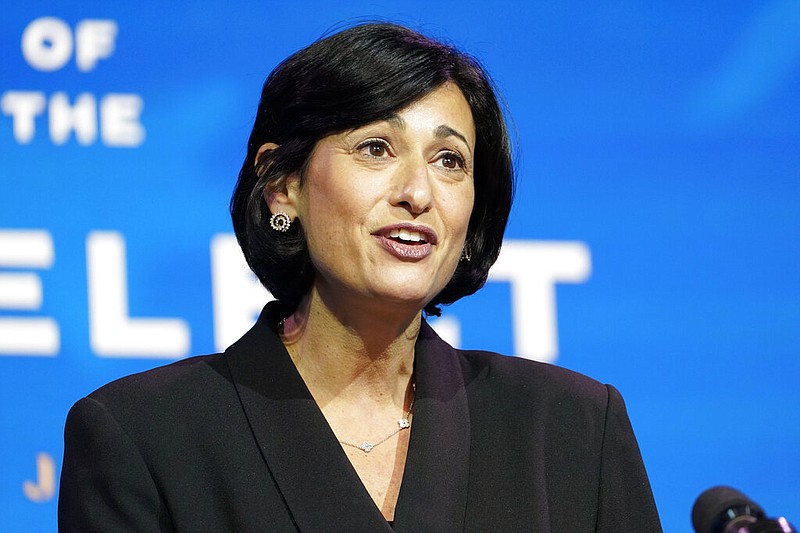 The nation's top public health official on Sunday defended her agency's abrupt reversal on wide-ranging mask recommendations, saying that the Centers for Disease Control and Prevention had weighed new data before announcing that Americans who had been vaccinated could go without masks.

"[W]e now have science that has really just evolved even in the last two weeks," CDC Director Rochelle Walensky said on ABC's "This Week," citing new data that coronavirus vaccines are curbing spread of the disease and offering protection against virus variants.

Walensky, who appeared on four separate Sunday morning news shows to explain her agency's new guidelines, also touted widespread access to those vaccines and called on tens of millions of unvaccinated Americans to go get shots.

"We also need to say that this is not permission for widespread removal of masks," she added on ABC.

Anthony Fauci, the government's top infectious-disease expert, acknowledged that there was "some merit" to questions about whether CDC could have better laid the groundwork for its messaging shift.

[Video not showing up above? Click here to watch » https://www.youtube.com/watch?v=kP1vYnExV4g]

"I would imagine within a period of just a couple of weeks, you're going to start to see significant clarification of some of the actually understandable and reasonable questions that people are asking," Fauci said on CBS' "Face the Nation."

Thursday's announcement that the CDC was changing almost all masking and distancing recommendations for fully vaccinated Americans caught physicians, state and local leaders and even some White House officials off guard.

Walensky first signed off on changing her agency's mask guidance a week ago but continued to defend CDC's sweeping guidance that Americans wear masks in public, including in a Senate hearing Tuesday before the CDC narrowed its recommendations.

When pressed about the quick turnaround on the agency's stance on mask wearing, Walensky said the agency was not giving in to pressure but instead needed time to review evolving science.

"I can tell you it certainly would have been easier if the science had evolved a week earlier, and I didn't have to go to Congress making those statements. But I'm delivering the science as the science is delivered to the medical journals," she said on Fox News Sunday.

The sudden change sparked praise from those eager to return to pre-pandemic life, particularly those who see the new guidelines as a way to reopen workplaces, schools and other venues that went dark during the pandemic.

Yet concerns have been raised from those who say there's no easy way for businesses and others to determine who is fully vaccinated and who is not. Instead, many will have to rely on an honor system as many states and communities have already been lifting mask mandates amid improving virus numbers and as more Americans have been shedding face coverings after getting shots.

Walensky disputed a question about whether the CDC was relying on Americans to now follow a "honor system" on masks. The Biden administration has repeatedly said that it will not impose requirements for people to prove they've gotten shots, like mandating so-called vaccine passports.

"The honor system is to be honest with yourself," said Walensky on Fox News Sunday, warning that Americans who weren't vaccinated and chose to go without masks were putting themselves at risk.

To date, more than 156 million Americans, or more than 47% of the population, have received at least one dose of covid-19 vaccine, and more than 121 million are fully vaccinated.

Walensky told reporters that the CDC is "actively working" to update the agency's guidance on safety protections at schools, camps and child care settings. She added that she's hopeful about the state of the outbreak in the United States, as cases continue to fall.

Walensky cautioned that even with the new guidelines, it was still too early to "declare victory," but added that she was "cautiously optimistic" about the pandemic.

"We have to remain humble. We've had way too many curveballs in this pandemic come to us. But I am really cautiously optimistic that we are in a good place right now, that cases continue to come down," she said.

TO MASK OR NOT TO MASK

Given the new CDC guidance released last week, millions of Americans are deciding whether to continue wearing masks.

Many are ready to put aside the sadness, isolation and wariness of the pandemic, yet others are still worried about new virus variants and the off-chance they might contract the virus and pass it along to others, though the risks of both are greatly reduced for those who are fully vaccinated.

Jan Massie is fully vaccinated against covid-19 and can pretty much give up wearing a mask. But she's still covering her face, even as the temperature rises in her native Alabama, because of benefits she says are too great to give up.

The retired educator didn't catch the illness caused by the new coronavirus, and she also didn't get the flu or her twice-yearly colds while masked during the pandemic. Unlike some, she's not gotten any hostile blowback in public for wearing a mask. So why quit now?

"I've worn a mask where it really wasn't required," Massie, who lives in suburban Birmingham, said Saturday. "Many people, more than I expected, still are, too."

Denise Duckworth was among the unmasked as she strolled through a revived French Quarter in New Orleans, where jazz musicians and tourists have returned to the streets.

"I've always been against masks, and I think all their rules have been hypocritical, and they've been confusing," said Duckworth, visiting from Kansas City, Mo.

Like most others, Duckworth wasn't wearing a mask on an upbeat Friday that made the Quarter feel more normal than it had in months. Alex Bodell of Ithaca, N.Y., stood out in the crowd because of the black mask covering his nose and face, but he was more at ease that way.

"I certainly feel a lot more comfortable, and I think I'm enjoying myself a lot more here being fully vaccinated and feeling that, you know, kind of regardless of my mask that I'm covered," he said.

Wearing a mask as he made an espresso at his coffee shop in San Francisco, Justin Lawrence said he's got to comply with local rules that mandate facial coverings for indoor activities.

Meanwhile, Andy Lamparter wore a mask at Saturday's Preakness Stakes in Baltimore, where Pimlico Race Course required them amid a sharply reduced crowd of 10,000 people, but he wasn't too happy about it. "It's annoying because I do have my shots," he said.

Going maskless during an outdoor event in Fargo, N.D., college student Andrew Kodet said he's been immunized and will follow the CDC guidelines.

"If you've been vaccinated, and you've put the effort into it to avoid spreading the disease, it's about time to begin this rebuilding process," said Kodet, 20. "There is nothing political about it with me."

However, Fauci noted that rebuilding process Kodet described may be difficult for some.

At a graduation ceremony for Emory University, he said that "the undeniable effects of racism" have led to unacceptable health disparities that especially hurt Blacks, Hispanics and American Indians during the pandemic.

"Covid-19 has shone a bright light on our own society's failings," Fauci said.

Speaking by webcast from Washington, Fauci told the graduates in Atlanta that many members of minority groups work in essential jobs where they might be exposed to the coronavirus. He also said they are more likely to become infected if exposed because of medical conditions such as hypertension, chronic lung disease, diabetes or obesity.

"Now, very few of these comorbidities have racial determinants," Fauci said. "Almost all relate to the social determinants of health dating back to disadvantageous conditions that some people of color find themselves in from birth regarding the availability of an adequate diet, access to health care and the undeniable effects of racism in our society."

Fauci said correcting societal wrongs will take a commitment of decades, and he urged the graduates to be part of the solution.

Fauci said that once society returns to "some form of normality," people should not forget that infectious disease has disproportionally hospitalized and killed people of color.

Fauci on Sunday was awarded the Emory University president's medal. Previous recipients include former President Jimmy Carter, the Dalai Lama and the late U.S. Rep. John Lewis, a civil-rights icon. In accepting the award, Fauci denounced the destruction of division.

"Societal divisiveness is counterproductive in a pandemic," Fauci said. "We must not be at odds with each other since the virus is the enemy, not each other."

Also on Sunday on CBS' "Face the Nation" Fauci said that he understood questions about why the United States was prioritizing vaccines for teenagers, who are at lower risk for serious complications, even as coronavirus continues to spread abroad.

The Biden administration has been under pressure to produce its promised plan to help vaccinate the world, as global virus cases hit new records this month and many developing countries say they do not expect to reach sufficient immunity for months or years. Only 10% of people in India have been vaccinated, according to the University of Oxford's Our World in Data project, even as the country deals with a raging coronavirus outbreak.

"I feel we do have a moral responsibility as a rich nation to make sure that others in poorer nations are not deprived of interventions that would be lifesaving. But I think we can do both," Fauci said on "Face the Nation."