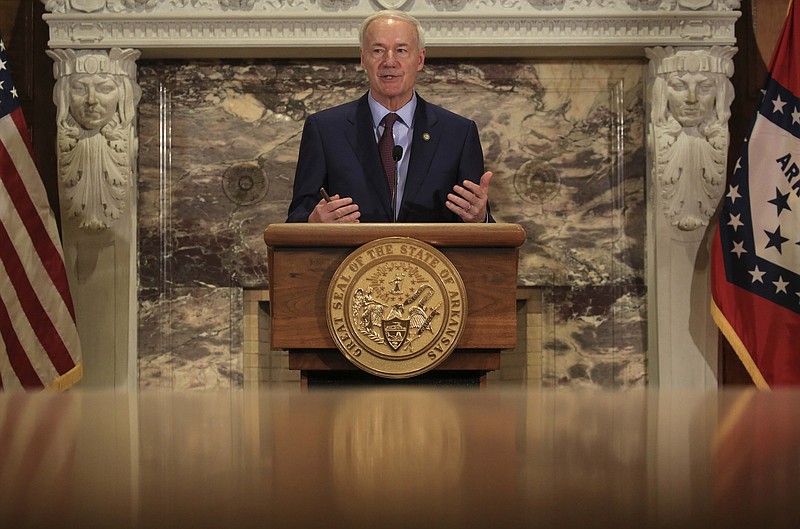 Gov. Asa Hutchinson speaks Tuesday May 11, 2021 during his weekly press briefing at the state Capitol in Little Rock where he announced the creation of a 14-member steering committee that will help in deciding how money from the American Rescue Plan will be spent. More photos at arkansasonline.com/512governor/. (Arkansas Democrat-Gazette/Staton Breidenthal)

What programs is the state pulling out of?

According to a letter Hutchinson sent to the Division of Workforce Services, the state is ending participation in:

• Mixed Earner Unemployment Compensation, which provided benefits to unemployed workers who were primarily self-employed but also received a small amount of wages from a traditional job

• Emergency Unemployment Relief for Governmental Entities and Non-Profit Organizations, which paid up to half the cost of unemployment charges for nonprofits and government employers

• Temporary Federal Funding for the First Week of Compensable Regular Unemployment for States with No Waiting Week program, which eliminated the standard one-week waiting period for unemployment benefits applicants

Why did Hutchinson and others want to end the state’s participation?

Hutchinson said he believes the programs are disincentivizing people from seeking work.

"The $300 federal supplement helped thousands of Arkansans make it through this tough time, so it served a good purpose," Hutchinson said in making the announcement Friday. "Now we need Arkansans back on the job so that we can get our economy back to full speed."

“With covid-19 vaccinations available to everyone, now is the time to re-enter the workforce to take advantage of the significant number of positions available,” he said.

What do experts say about the move?

Charles S. Gascon, a regional economist with the Federal Reserve who conducts research for the area that includes Arkansas, said there are multiple reasons some workers may not be ready to return to the labor pool or fill open positions.

Generous benefits may be a factor, but other reasons include a lack of childcare, anxiety around being laid off again and that the jobs currently open may not suit every seeker.

Read more about the state's decision from reporter Andrew Moreau.